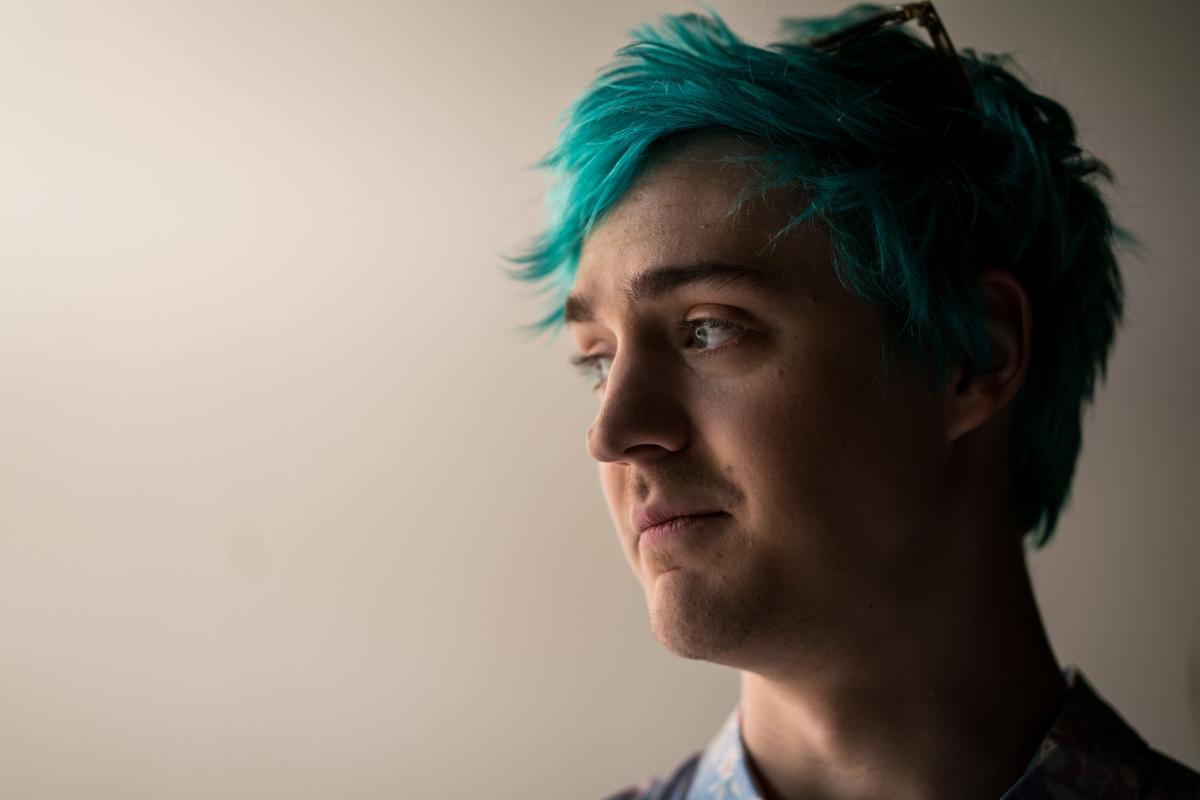 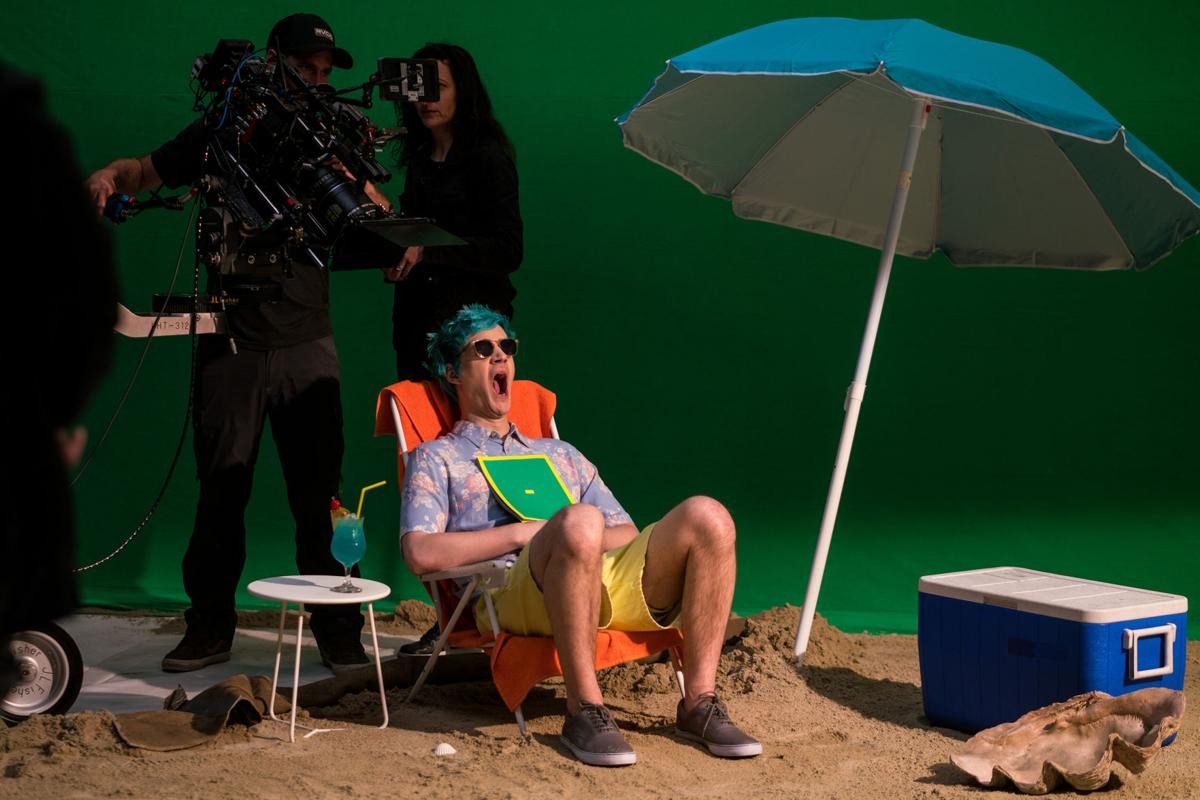 LOS ANGELES - Tyler "Ninja" Blevins is taking a break. He doesn't do that often, but he is forced to briefly stop and relax while the backdrop is changed for a commercial he is shooting in Long Beach.

As he scrolls through his phone, he looks up and notices a middle-aged crew member staring at him.

"Can I please take a quick picture with you?" the man whispers, knowing he shouldn't be asking for a photo while on the job.

"My son is such a big fan," the man says as he snaps a quick selfie. "He's not going to believe I met you."

If you haven't heard of "Ninja," chances are you're either not between the ages of 12 and 24 years old or the parent of someone who is. Blevins is the most popular video game player in the world and the unofficial face of Fortnite, the popular battle royale in which 100 players are dropped onto an island where they fight to the death until one winner is left standing (and dancing).

The simplicity of the free-to-play game has attracted more than 250 million registered players, from grade school children to professional athletes.

What separates Blevins, 27, from other Fortnite players is his skill and following. He has more than 14 million followers on Twitch, Amazon's live streaming platform; almost 14 million on Instagram; more than 4 million on Twitter; and more than 22 million subscribers on YouTube.

His influence is such that Electronic Arts reportedly paid him $1 million to play its battle royale game, Apex Legends, when it was released in February. Without any announcement or marketing, more than 50 million people played the game in less than 30 days.

Blevins typically makes more than $500,000 per month streaming - double that in his best months. He's not shy about sharing that information because he wants to change the perception of gaming and esports. He wants young people to aspire to be streamers and gamers, just like previous generations aspired to be football and basketball players. And he wants parents to be supportive of those aspirations, knowing it's possible to make a career out of it.

It's hard for Blevins to walk around unrecognized, which is partly his fault. Anyone with bright pink hair pointing in every direction is going to attract attention.

As he walks into a small Santa Monica cafe for breakfast, his bright mane is hiding under a hoodie, but he is still identified by a couple who snap a photo of him.

"I get a big hoodie and cover up because people know me for my hair," says Blevins, who has died his natural light brown strands everything from purple to red over the years. "If I hide the hair I'm pretty incognito for the most part."

Blevins typically accommodates requests for photos, many from parents with children too shy to ask themselves. He recently said no to a fan who wanted a photo while he was on the phone and walking with his wife in their gated community, but felt so guilty about it later that he publicly apologized on Twitter. He can only recall wanting to say no only one other time, and even then allowed the photo anyway.

"One time I was at the Olive Garden with my wife and I had someone sit right next to me," Blevins says between sips of coffee. "I'm sitting across from my wife having dinner and this guy just sits next to me and asks for a picture. I took the picture but I'm like, 'C'mon, bro.' "

Life wasn't always like this for Blevins. There was a time when he could enjoy his endless breadsticks and Fettucine Alfredo in peace. But everything changed after March 14, 2018.

That was the night Blevins set the Twitch record for a single individual stream when more than 600,000 concurrent viewers tuned in to watch him play Fortnite with Drake, rapper Travis Scott and Pittsburgh Steelers wider receiver Juju Smith-Schuster.

He was averaging about 100,000 viewers before that game. "That night changed my life," he says. "Drake is a legend. It propelled my career and accelerated everything. We were just gaming. That was my favorite part."

His least favorite: That many people now know him only as "the Fortnite guy" - a screaming, risk-taking, bandana-wearing killing machine.

Blevins became a professional gamer in 2009, playing Halo 3 and other games. He began actively streaming in 2011. Fortnite was released in 2017, and the popularity of the game and player rose together.

But in the fickle world of esports, the popularity of games rise and fall. Blevins doesn't want his fame tied to one game, like an actor forever cast as a particular type of character.

Blevins and his wife, Jessica, who is also his manager, met at a Halo tournament in 2010 and were married in 2017 in Lake Villa, Ill. She always thought he had the personality to make it outside of gaming, but neither of them could have anticipated the demand for his time in the aftermath of streaming with Drake.

Suddenly the mom and pop shop they had essentially been running out of their home outside of Chicago had grown into a multi-million dollar company.

The streaming revenue, which comes from ads, subscriptions and donations, doesn't include what he makes as a content creator on YouTube, as an influencer on Instagram or as a pitchman for companies such as Red Bull, Samsung and Uber Eats.

"Last year, my wife and I had multiple conversations about what I wanted to do," Blevins says. "I told her, 'Baby, we're not going to hang out a lot this year' and she said, 'Yeah, I know.' I literally streamed 12 hours a day, minimum. I streamed as much as possible.

"Now, we've taken a little bit of a step back and we're thinking 3-4 years in the future. We're starting to think about life and if I want to be streaming 300 hours a month."

The decision of whether to stream is a financial one. When he doesn't stream, he loses subscribers, which means he loses money.

During breakfast, he becomes antsy after about 30 minutes and asks to get his coffee to go so he can get back to work. He estimates he lost about 200 subscribers while enjoying his eggs and bacon.

Gaming fans can be unforgiving. Blevins weighs every trip, every interview, every event against the amount of subscribers and money he could lose. While in Los Angeles for the Electronic Entertainment Expo (E3) last summer, he said he lost 100,000 subscribers - and $500,000 - in just four days. It was worth it, he says, because he was able to engage with celebrities and athletes at the Fortnite Celebrity Pro-Am, a 50-team, 100-person invitational event held at Banc of California Stadium, the home of LAFC.

"My mentality is way different than it was a year ago because my goal is to be bigger than streaming and bigger than Fortnite," Blevins says. "My only source of revenue for seven years was just streaming, but now there are so many other avenues of revenue. Any time I can do something to help me get more mainstream I'll turn to my wife and say, 'Baby, do you think this is worth it?' If we value it more than what we will lose by streaming, then we'll do it."

There have been many magic moments for Blevins over the past year, but few compare to his appearance in the "NFL 100" commercial, which aired during the Super Bowl. In one of the spots, NFL Commissioner Roger Goodell, Jim Brown, Peyton Manning, Dick Butkus, Michael Strahan and Aaron Donald all say his name.

"Peyton introduced himself to me and I'm like, 'You don't have to do that, I know who you are,' " Blevins says.

"That was so surreal to me. I got butterflies in my stomach."

It's just before noon at a Westside studio Red Bull has built for him for his trips to Los Angeles. As Blevins sits in a large black and red gaming chair, he take a sip of coffee and makes sure everything around him is in order before he starts the countdown to his stream.

He circles his mouse, taps the keyboard and adjusts the camera above his monitor. Within minutes of his notifying fans he's about to stream another game of Fortnite, his audience will rise to 40,000, twice the capacity of Staples Center.

Blevins views each game he streams as a performance; a new episode of a reality show in which he produces, directs and stars. While he attracts millions of viewers because he's one of the more skilled players in the world, he keeps them coming back on a regular basis because he's also one of the most entertaining. Like a baseball announcer weaving stories between pitches, Blevins shines brightest during breaks in the action with impressions, jokes, freestyle raps and whatever else might come to him spontaneously.

"What makes Fortnite and battle royales special is they allow you to tell a story," Blevins says. "The games generally last 25 minutes, where normal arena shooter games are five minutes or less. As a viewer and as a streamer, there's a lot of down time and anticipation to really hype moments.

"So as a streamer, you can talk in the chat and thank people for watching the stream. You can really paint a picture and tell a story. It's also really easy to follow. You launch in with nothing and you're on your own. There's X amount of players remaining and the last one standing wins. It's a beautiful story-telling mechanism."

While Blevins is still considered the most popular video game player in world by most mainstream metrics, he is constantly concerned about being replaced or, worse, forgotten.

"I want to be remembered as the grandfather of gaming," Blevins says. "I know that sounds weird coming from a 27-year-old, but I want people to remember me.

"I don't want someone else to come along who hasn't come to close to doing what I've done and take my place."