Superstore (8:30/7:30c, NBC): How we're going to miss shopping for laughs at Cloud 9. As the long-running comedy returns from a winter break for its final 11 episodes, it's in top form with a whimsical approach to the hot-button topic of systemic racism. The catalyst: a corporate decision to no longer lock up Black hair-care products. With these items now free at last, it's an awakening for the employees to debate what other store policies need to be addressed, and Garrett (Colton Dunn) becomes the reluctant agent for change. Kept away in quarantine, Glenn (Mark McKinney) tries to make reparations in his own awkward way — and as usual, only makes the situation more uncomfortable for everyone. Search Party (streaming on HBO Max): The gang's not all here for the fourth season of the dark mystery-comedy, but will they even notice? Dory (Alia Shawkat) is being held prisoner by her delusional stalker (At Home with Amy Sedaris' Cole Escola), but as usual, her best buds are caught up in their own self-obsessed worlds. Portia (Meredith Hagner) has what should be a dream role in a film about the trial — except she's not playing herself. Drew (John Reynolds) is burying his trauma inside a theme-park character's costume, and the toxic Elliott (John Early) has flipped allegiances, fashioning himself as a far-right talk-show host. With friends like these, should Dory even dream of rescue? The show returns with three episodes this and next Thursday, with the final four episodes available on Jan. 28. Plus, they tease Susan Sarandon's guest role and more.

More HBO Max premieres on its preferred launch date of Thursday: The all-star movie Locked Down is a hybrid of rom-com and heist caper, featuring Anne Hathaway and Chiwetel Ejiofor as a couple in London who are thinking of separating when the pandemic lockdown forces them even closer together. That’s when they decide to pull off a jewel heist at the posh Harrods department store. Co-stars include Ben Stiller, Ben Kingsley, Dulé Hill, Mindy Kaling, and Stephen Merchant… From the reality aisle: The Event is a four-part series that goes inside Wolfgang Puck's catering company as they prepare for the sort of elaborate occasions that the COVID-19 crisis has currently put on the back burner. For now, events like the SAG Awards and premiere parties for shows like Westworld are all happening virtually. But when they're back in business, so too Puck hopes to be. 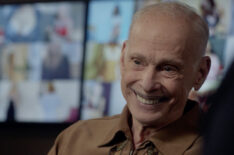 John Waters Naturally Returns to 'Law & Order: SVU' for an Episode on Camming

UFO Witness (streaming on Discovery+): History's fictionalized Project Blue Book may be history, but this eight-part docuseries (premiering with three episodes before rolling out weekly on Thursdays) reopens many of those infamous case files alleging UFO encounters. Ben Hansen, a former federal agent and paranormal investigator, leads the charge with fellow investigator Mark O'Connell, a biographer of Project Blue Book's legendary chief scientific consultant Dr. Allen J. Hynek. Hynek's files were made available with the help of Jennie Zeidman, the last surviving member of the Project Blue Book team before passing away last April. In the first episodes, Hansen looks into military encounters with "tic tac"-shaped flying objects, multiple sightings in Pennsylvania and a report on whether government scientists may be reverse-engineering alien technology from downed UFOs. True or not, Witness is out there. Law & Order: Special Victims Unit (10/9c, NBC): Broadway remains dark, but two of its brightest musical stars take center stage in a powerful showdown between a "cam girl" (Hadestown's Eva Noblezada) with a seductive online persona and the superfan (Alex Brightman of Beetlejuice and School of Rock) who crossed the line by breaking into her room and assaulting her in person. Director John Waters (Hairspray) makes a wily cameo as the website's smarmy entrepreneur in an episode that addresses an issue all too common in rape cases: victim-blaming. Ask Matt: Discovery+ a Minus? Plus: Game Shows, the Great 'Kat' Debate & More

Plus questions about 'Virgin River,' and more.

Inside Thursday TV: NBC's Mr. Mayor (8/7c) tests the mettle of hapless Jayden (Bobby Moynihan) when he’s tasked to interview candidates for a job opening… On ABC's new game night, Celebrity Wheel of Fortune (8/7c) invites The Price Is Right host Drew Carey, This Is Us star Chrissy Metz, and former Desperate Housewife Teri Hatcher to take a spin for charity. Followed by The Chase (9/8c), which we presume will let either James Holzhauer or Brad Rutter become "The Chaser" and give Ken Jennings a rest… Who to call when Kat (Mayim Bialik) wins a trip for two to Puerto Rico on Fox's Call Me Kat (9/8c)? No one she knows can join her, so will she have the gumption to leave her cats behind and take a solo vacation?

Get the latest information on hit TV shows and more with our weekly newsletter!

REVIEW: Kyra Sedgwick checks in as a 'smother' in 'Call Your Mother'

When an Iowa mom doesn’t hear from her son in four days, she decides to move to California and discover why. It’s a lot to unpack ... and it could use a few more Iowa references (we’ve got plenty of them).

Dustin Diamond of 'Saved by the Bell' hospitalized with cancer

Dustin Diamond, who played Screech on the popular 1990s high school comedy "Saved by the Bell," is hospitalized with cancer, his manager said.

Canceled TV shows 2021: Which of your favorite series are coming to an end?

A roundup of all of the shows that are coming to an end this year.

If you do everything right as a parent, you get fired from the job, actress Kyra Sedgwick says.

Upset she hasn’t heard from her son in four days, Sedgwick's character in "Call Your Mother" decides to leave Iowa (armed with socks and toilet paper) and move to Los Angeles – for a while — to shadow her son and daughter.

REVIEW: Kyra Sedgwick checks in as a 'smother' in 'Call Your Mother'

When an Iowa mom doesn’t hear from her son in four days, she decides to move to California and discover why. It’s a lot to unpack ... and it could use a few more Iowa references (we’ve got plenty of them).

Green Bay Packers quarterback Aaron Rodgers said Tuesday that he will be among the parade of guest hosts on "Jeopardy!" after Alex Trebek's death.

50 classic TV quotes that are now part of everyday vocabulary

'Sex and the City' reboot coming to HBO Max, minus Kim Cattrall

"Sex and the City" will return to the screen, 17 years after its last episode, with a reboot titled "And Just Like That...," HBO Max has confirmed.

REVIEW: 'WandaVision' avenges our loss of good TV; in a word: It's great

So totally different, so off-brand, it seems like someone is punking Marvel’s universe. It's one of the best new shows in years.

Catch these titles before they leave Netflix in January

Catch these titles before they leave Netflix in January