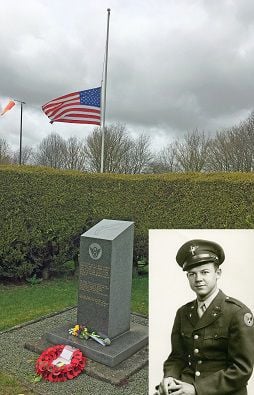 MUSCATINE — In memory of the late Arthur Sensor, the United States flag was flown at half-staff at the Memorial to the 489th Bomb Group in Halesworth, England. A posy of flowers was laid there on his former WWII airbase by volunteers who knew him.

Arthur Sensor was born January 23, 1921, in West Union, Iowa, to Harley and Winifred Sensor. He passed away March 19, 2020, in Iowa City, Iowa. At the time of his death, he was a resident of Muscatine, Iowa.

Arthur grew up in Fayette County, Iowa. He had one sister, Dorothy. In 1944, he enlisted in the Army Air Corps and was commissioned a 2nd Lieutenant. He served as a navigator on B-24 aircraft bombing Germany from Halesworth, England, during WWII. Toward the end of the war, he was stationed in Arizona flying long-range practice missions on B-29s training for the war in the Pacific until his honorable discharge.

He earned his BA at Upper Iowa University and earned a master's degree in education from the University of Iowa. Art served 39 years as a teacher, school principal, and superintendent of schools in several Iowa school districts. He and his wife, Marian, were married for 69 years and have four children, Donn (Karen), Ann Rogal, Paul (Carol) and Wayne (Cindy); eight grandchildren; and eight great-grandchildren.

Throughout his life, Art enjoyed spending time with his family and friends. Many happy weekends and seasons were spent camping together with family and friends at The Woods. He loved flying and built an experimental VP-2 open cockpit airplane. Many evenings, he could be found carving intricate wooden spoons and figures. He was an amateur (ham) radio operator for many years, and enjoyed gardening, reading, and traveling.

Arthur was preceded in death by his wife, Marian; his parents, Harley and Winifred Sensor; his sister and her husband, Dorothy and Gordon Maring; his daughter-in-law, Karen; and many family members and friends.

A memorial service will be held at a later date. Online condolences may be sent to the family at www.lensingfuneral.com.

To plant a tree in memory of Arthur Sensor as a living tribute, please visit Tribute Store.

Sign up to get the most recent local obituaries delievered to your inbox.

Add an entry as

Add an entry
Watch the guestbook. Stop watching this guestbook.