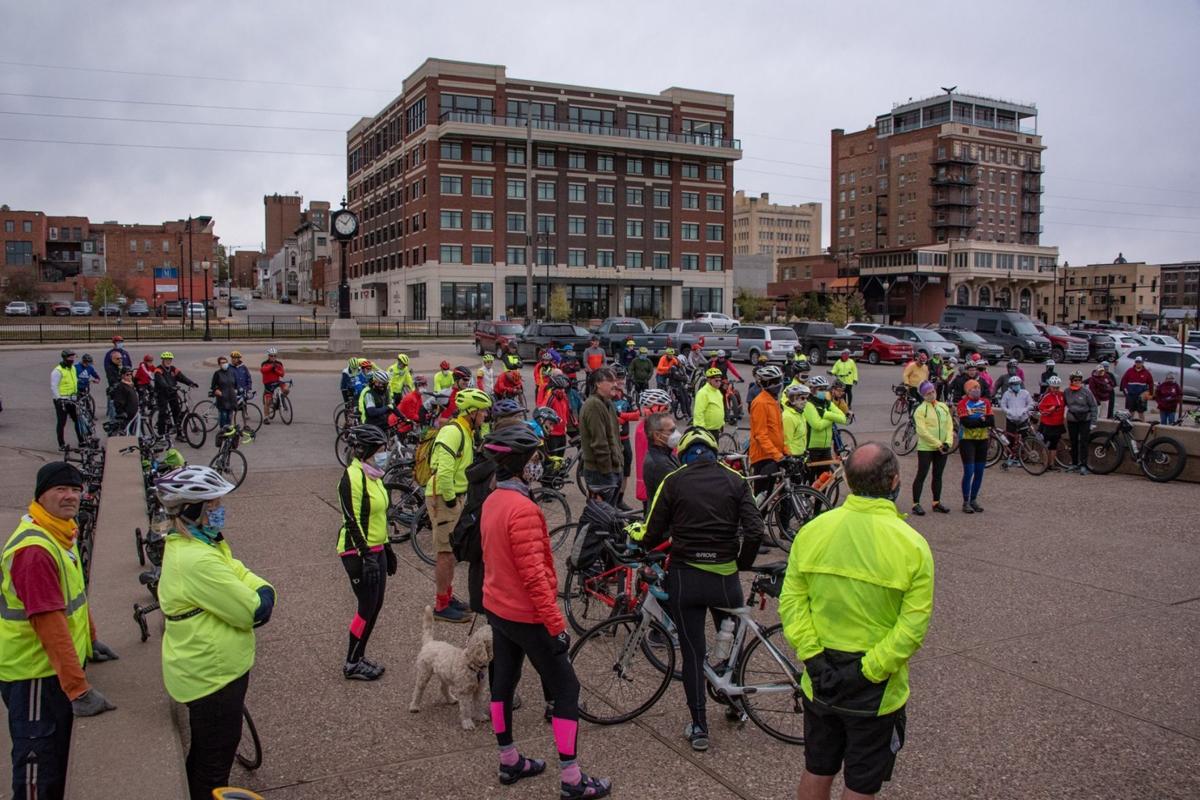 Over 130 people and 90 cyclists gathered at Pearl City Station on Saturday, Oct. 17 to honor and remember Joe Mann. 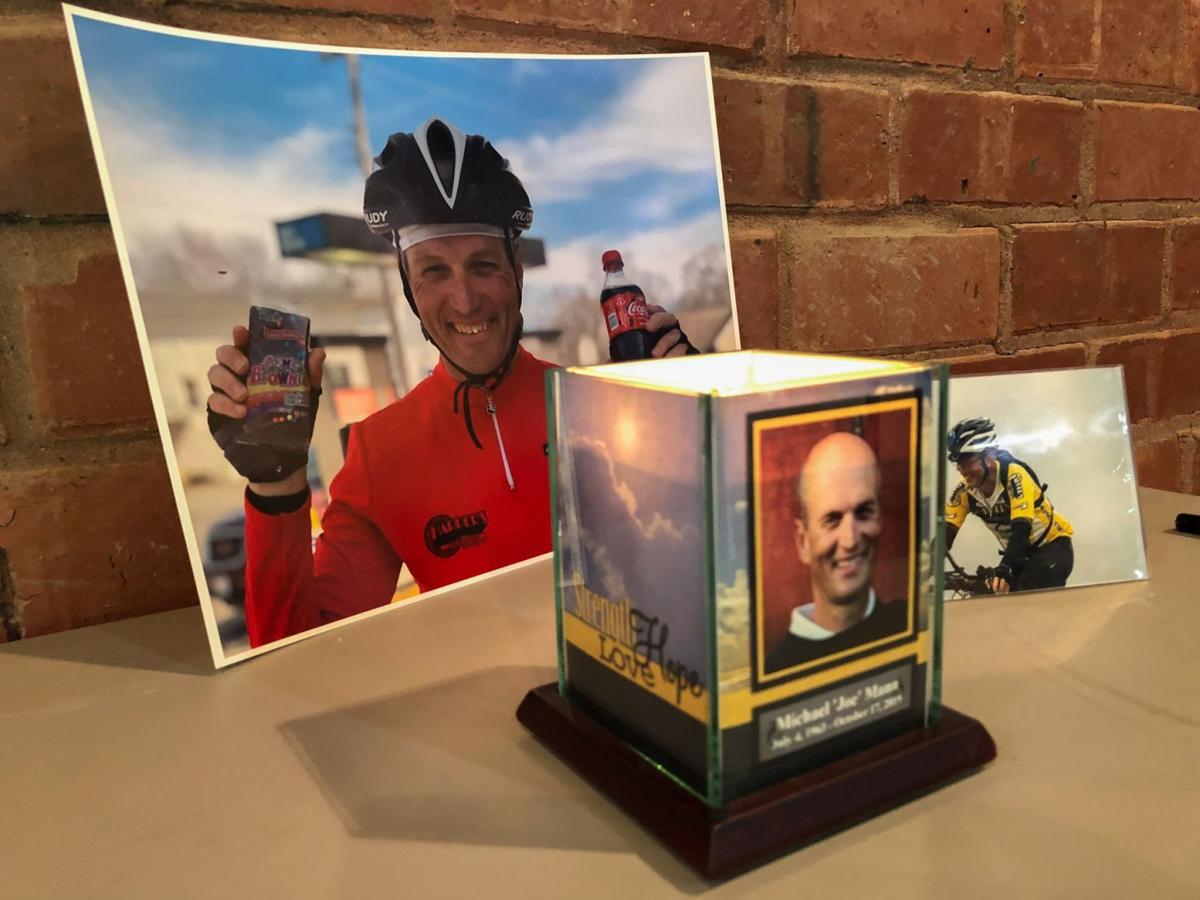 In 2019, Joe Mann was hit by a vehicle while riding his bike. One year after his death, family and friends gathered to ride their bikes in his honor and share stories and memories of Joe. 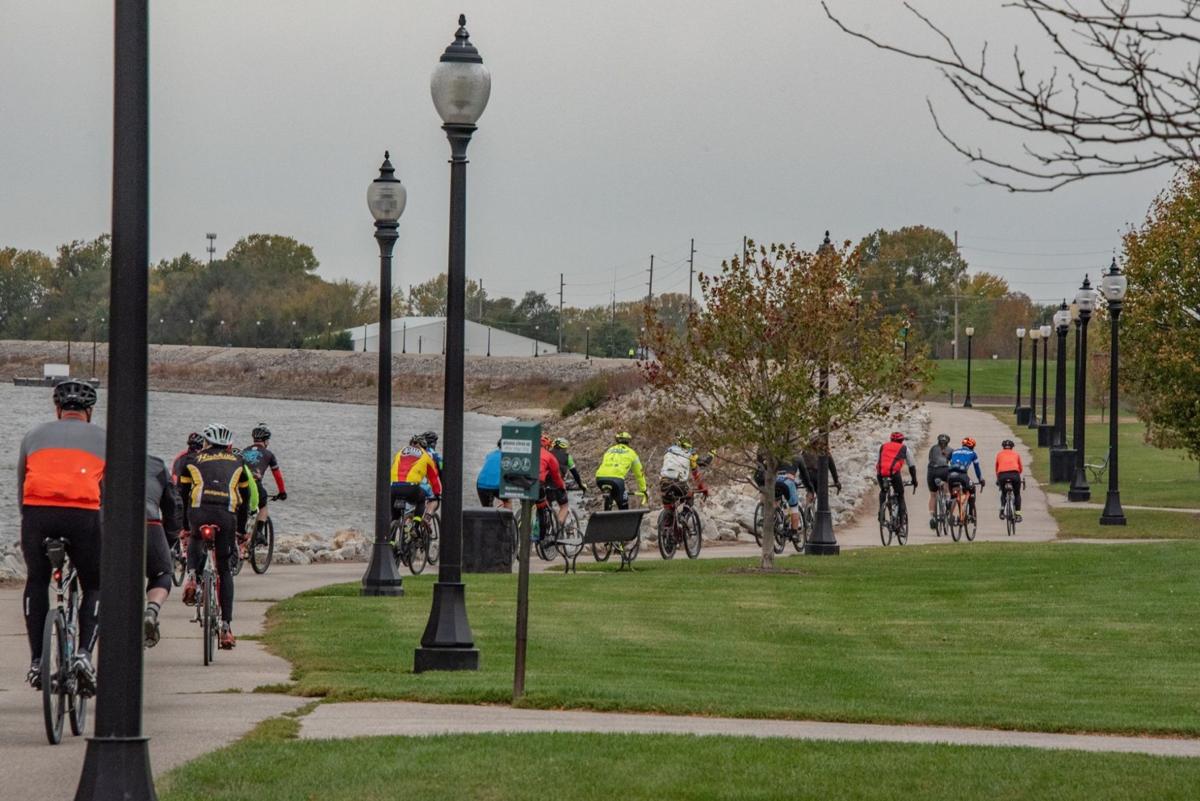 Cyclists rode through harsh winds this past Saturday in order to honor fellow cyclist and friend Michael "Joe" Joseph Mann on the first anniversary of his death.

MUSCATINE — On October 17, 2019, Muscatine resident Michael “Joe” Joseph Mann was struck by a vehicle while riding his bike, a crash that took his life. One year later, his family, friends and cycling enthusiasts gathered at Pearl City Station to remember Joe’s life through a special memorial bike ride.

They remember Joe as an avid cyclist and a member and former president of the Melon City Bike Club.

Over 130 people gathered Saturday morning, with 90 cyclists braving cold temperatures and high winds to ride in his memory. Connie Mann, Joe’s widow led the memorial ride with Caleb Mann, one of his two sons.

“It was amazing to see so many riders and family and friends that came out in support and to honor Joe,” Connie said. They had people from Utah, Colorado, Missouri, Illinois, Wisconsin and more attend, she said.

“They came from everywhere. It was a really special day, and a great way to honor what he loved doing.”

“My dad loved three things,” Caleb said at the gathering. “He loved God, he loved his friends and family, and he loved cycling.”

“He was so encouraging, he always had a positive influence on everyone. He loved getting new people out on the road and giving tips and pushing people to their limits,” Connie said.

“It was a good gathering of cycling friends and the biking community all around,” said Greg Harper of Harper’s Cycling and Fitness. “It felt good to memorialize Joe, because he was just an all-around great guy and an amazing cyclist. There’s so many things that could be said about Joe, it’s hard to really encapsulate it all. He will be deeply missed.”

Harper enjoyed meeting other cyclists who had ridden with Joe over the years. Joe had also participated in endurance rides throughout his life, such as RAGBRAI, the 24-hour Ultra-Distance event, and the Race Across the West section for Race Across America.

“It was just fun to be with them and see them face-to-face,” Harper said, “because (Joe) would talk about all the people he’d met and rode with. It was good just to be there. Everybody kept pretty good spirits and rode to their own ability.”

Two different routes were used. One, a 30 mile route, honored the 35 years Joe worked prior to the retirement he was looking forward to. The other route, 50 miles, was used to honor Joe’s 56 years of life. Both were a mix of gravel and pavement, with the first mile a Ride of Silence.

While the weather was chilly and windy, that was fitting, Connie said.

“We were going to have this event rain or shine,” Connie said, “Joe rode in all conditions, and there were no excuses. He liked that kind of weather.”

“The wind is just one of those things that gives you character, and it’s all part of the experience,” Harper said.

After the ride, cyclists gathered to share a meal and memories. Riders were invited to donate money toward the Iowa Bicycle Coalition, which promotes safe cycling legislation in the state. Two hundred T-shirts commemorating the event were sold for that cause.

Money was also used to buy a water bottle-filling station for the riverfront bike trail, along with a plaque with Joe’s name on it. “That’s where we usually started our group bike rides over the years, so we thought that was pretty appropriate,” Connie said.

Harper said the event showed how much the cycling community recognizes how they are effected by vehicle-related crashes. “We all rode safe, and it just felt like the right thing to do,” he said.

“I just thought it was a great bike ride to have. (Joe) always said he didn’t have many friends, but I think this event proved otherwise,” Connie said.

Local artist seeks to get pinstriping recognized as an art form

MUSCATINE — The Holiday Stroll may look a bit different this year, but many small business owners and community members are doing their part t…

MUSCATINE — The subject of the use of fireworks came up again during the Muscatine City Council meeting Thursday.

Dog to be removed from city after being declared dangerous

MUSCATINE — Muscatine has many talented artists, and one is using his skills to help those in need this holiday season.

Dancing to give back: Miss Louise School of Dance continues annual holiday performance

MUSCATINE – For 36 years, the class at Miss Louise School of Dance has performed in the Sherwin Williams store front window, and though the Ho…

FRUITLAND — No sooner had the car pulled into the parking lot of Island United Methodist Church Thursday morning when a group of volunteers, c…

MUSCATINE – Due to an Iowa Supreme Court ruling continuing jury trials until February 2021, a pretrial conference and the pretrial motion dead…

Over 130 people and 90 cyclists gathered at Pearl City Station on Saturday, Oct. 17 to honor and remember Joe Mann.

In 2019, Joe Mann was hit by a vehicle while riding his bike. One year after his death, family and friends gathered to ride their bikes in his honor and share stories and memories of Joe.

Cyclists rode through harsh winds this past Saturday in order to honor fellow cyclist and friend Michael "Joe" Joseph Mann on the first anniversary of his death.