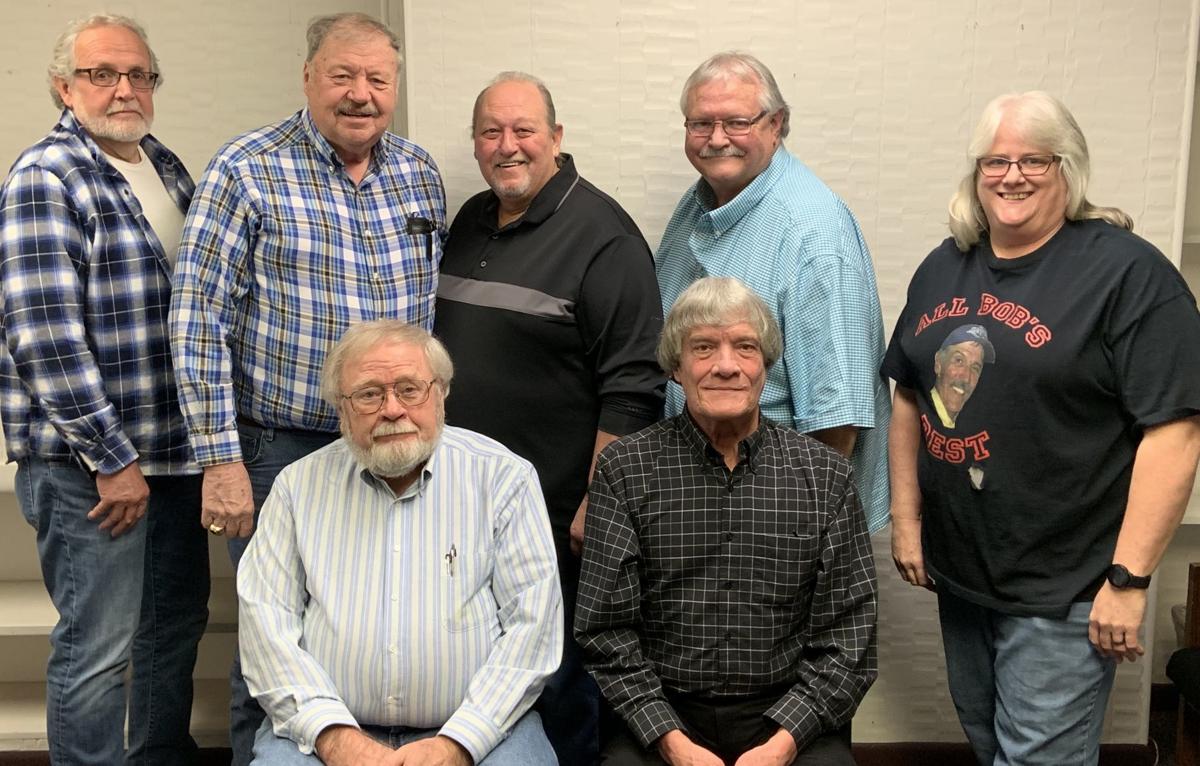 On their band's 50th anniversary, the Muscatine band Lefty and the Spinners received induction into the Iowa Rock 'n Roll Hall of Fame for all their years of fun shows filled with 60s and 70s hits. 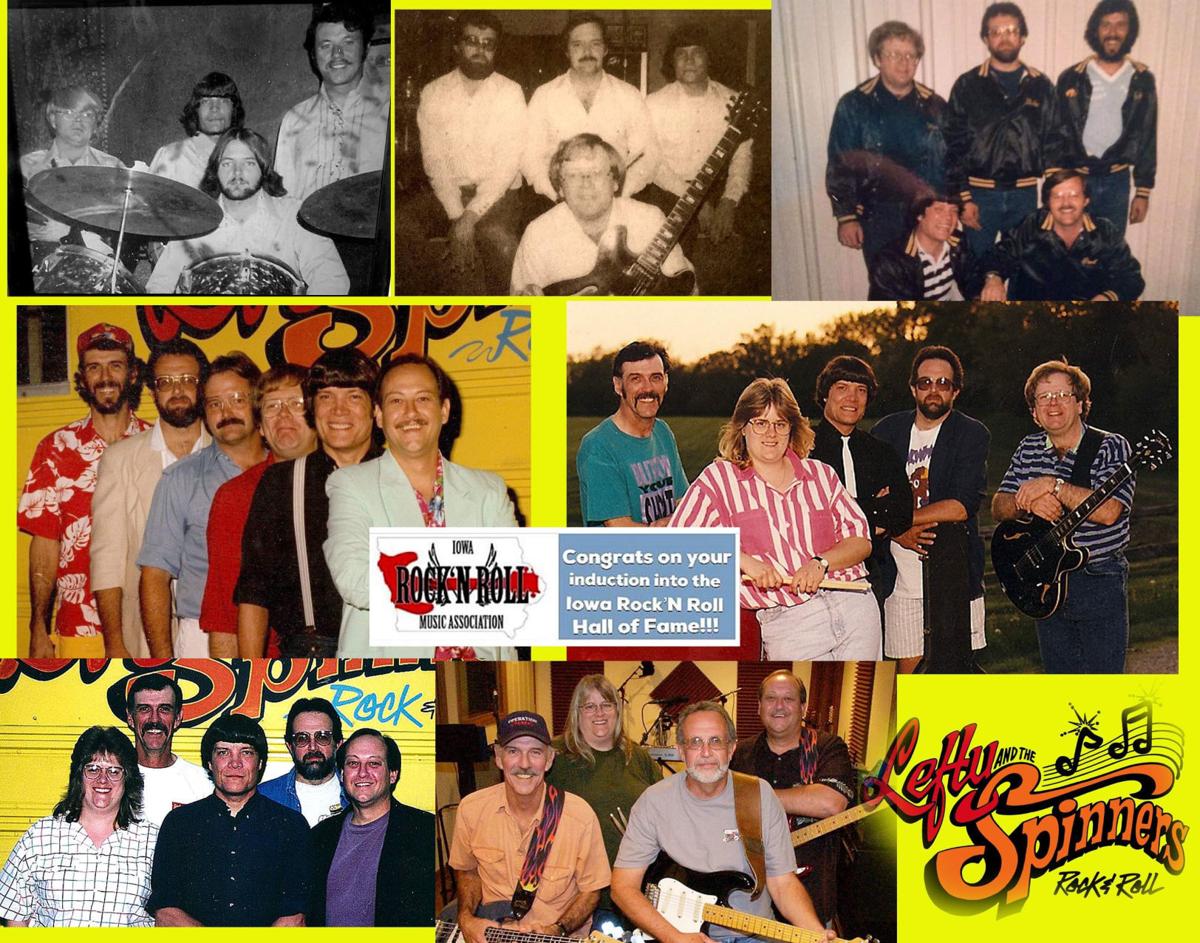 This collage made by Lefty and the Spinners band member Beth Hecht-Van Zandt showcases the band's entire 50-year run and all of its various band member line-ups.

MUSCATINE — For fifty years, one Muscatine band has played all across eastern Iowa and western Illinois, and this fall they will officially be given state-wide recognition for their talent.

The band Lefty and the Spinners has officially been made one of the Iowa Rock ‘n Roll Music Association’s 2020 inductees for the Iowa Rock n’ Roll Hall of Fame. The group, along with the rest of the inductees of this year, will be honored during the Induction Spectacular Weekend on Sept. 5 and 6 in the Iowa Great Lakes.

The band began in 1970 at Muscatine Community College, with their name coming from Scott Hendriks, their left-handed drummer.

“I started the band with three guys out from the college, and that band kind of evolved as people left to go to school and things like that,” said Hendriks, “In ’71, Bobby had joined us, and so we kept going in ‘72, and Paul and Wayne got with Bobby and I, and we kept going…”

Lefty and the Spinners had several line-up changes through the years, with members keeping in touch with each other. Along with Hendriks, this included Bob Guy (who will be a double inductee, already inducted into the Hall of Fame through another band, the XL’s), Wayne Stuart, Paul Elshoff, Mike Seright, Bob Eichelberger (who died in 2011), Parke McConnaha and Beth Hecht Van Zandt. “It just kind of evolved, and the band kept going,” Hendriks said.

“I looked up to both (Scott Hendriks) and (Bob Guy), and I almost fainted on the day when they called me up and asked if I’d be interested in joining,” said Elshoff, “I wasn’t going to say no.”

All of the members of the Spinners have played in different bands before joining, with some members knowing each other through middle and high school. “I was a fan before I was demoted to a member,” Van Zandt joked.

Back when she was in the band Series, Van Zandt played a job with Lefty and the Spinners, prompting her to follow them until she joined in 92’. She later added that those years she played with the Spinners were some of the best of her life.

“Scott and I have known each other our entire lives, pretty much,” McConnaha said, “and I was playing with a country band that I had been for 14 years… I had wanted to get back into playing rock and roll again and who better than these guys to play with?” After following them, McConnaha considered them one of the best bands around at the time.

Over the years, Lefty and the Spinners played many shows, both private and public. For many people who grew up in the 70s and 80s, this local band was the first one they saw perform live, still following them to this day.

“Sometimes we would have three to four generations of the same family out dancing at one of our shows,” Hendriks added. The band opened for various rock legends and played at events such as the British Re-Invasion Tour, the Dancin’ in the Streets outdoor festival, and Burlington Steamboat Days.

At the band’s core, they specialized in 60s and 70s music. Lefty and the Spinners was the first Muscatine band to be firmly dedicated to rock ‘n roll oldies and are officially documented as such. When asked why they chose to focus on covers over original songs, it was simply because they knew what people wanted to hear. “They want to be able to know the songs and sing along," Stuart said.

“It’s really cool that we’ve done this long enough and that a lot of our children and now our children’s children are interesting in playing also,” said Seright.

While their shows were definitely fun, the group agreed that some of their favorite memories were in-between shows during set up and take down or when they were hanging out and making jokes together. Members Eichelberger and Stuart especially enjoyed playing jokes on each other.

“It was all special, it didn’t matter what the event was,” Elshoff said, “just to be with these clowns on all those weekends for all those years, it was like our second life. The prized moments were the non-performing moments.”

Though the band officially retired November 2008, the oldest members — Hendriks, Elshoff, Stuart and Seright — have since started playing benefit fundraisers such as Rockin’ on Sycamore Festival to help raise money for the Shop with a Cop event and the Salvation Army’s Rock the Red Kettle.

Brian Chick, who helped get the oldest members back together for the benefit, first saw them perform for his grandparents’ 40th wedding anniversary. “We were the first band he ever saw perform live, and he just clung to us. From that point on, we’ve always been his favorite,” said Elshoff.

In February, the band will be playing at the Armed Forces Armory for the Fruitland Community Lions’ Club All Veteran’s Memorial Fundraiser Dinner and Dance.

“It’s been an honor for us to be inducted into the Hall of Fame, and it’s also been an honor for me to play with all these people over the years. I really appreciate that very much,” Hendriks said. All of his fellow members shared the same sentiment, and agreed that they wouldn’t have wanted to be doing all this with any other band.

Muscatine Police ask people to be vigilant due to attempted burglaries

MUSCATINE — The Muscatine Police Department is warning residents to remain vigilant after a series of attempted burglaries were reported.

Two charged with terrorism in Muscatine after early morning incident

MUSCATINE – About 40 years ago, Sharon Phillips remembers Mulberry Street being filled with bars — bars she would go to every night.

LOUISA COUNTY — A Wapello teen was killed Friday in a crash on County Road X61 near E Avenue in Louisa County.

MUSCATINE – Retirement may seem like a time to take it easy, but Tom Summitt is keeping busy and doesn’t see himself fully walking away from t…

On their band's 50th anniversary, the Muscatine band Lefty and the Spinners received induction into the Iowa Rock 'n Roll Hall of Fame for all their years of fun shows filled with 60s and 70s hits.

This collage made by Lefty and the Spinners band member Beth Hecht-Van Zandt showcases the band's entire 50-year run and all of its various band member line-ups.