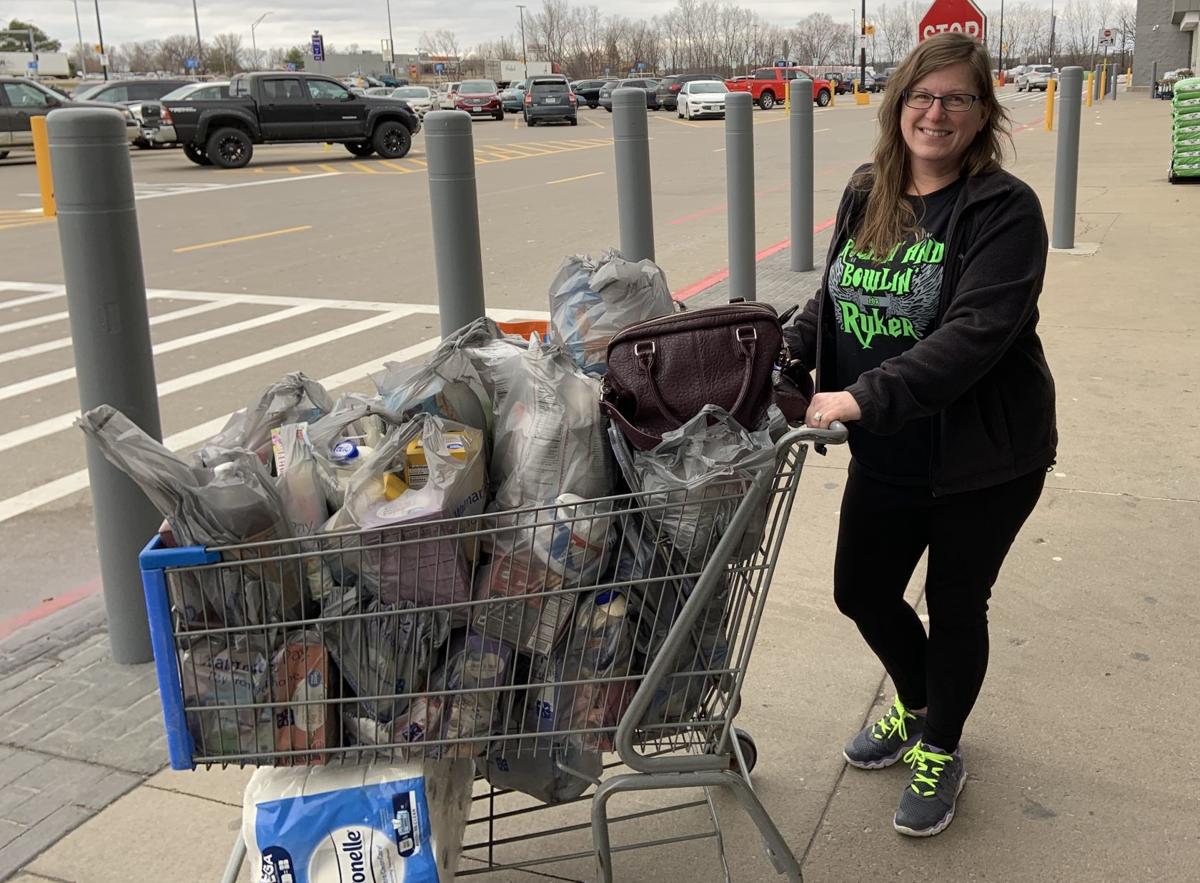 “This is the first time I’ve gone grocery shopping in a couple weeks…" said resident Heather Dusenberry, "I got one of the last things of toilet paper.” Even against some COVID-19 stockpilers and a few empty shelves, many residents are still able to get the groceries they need. 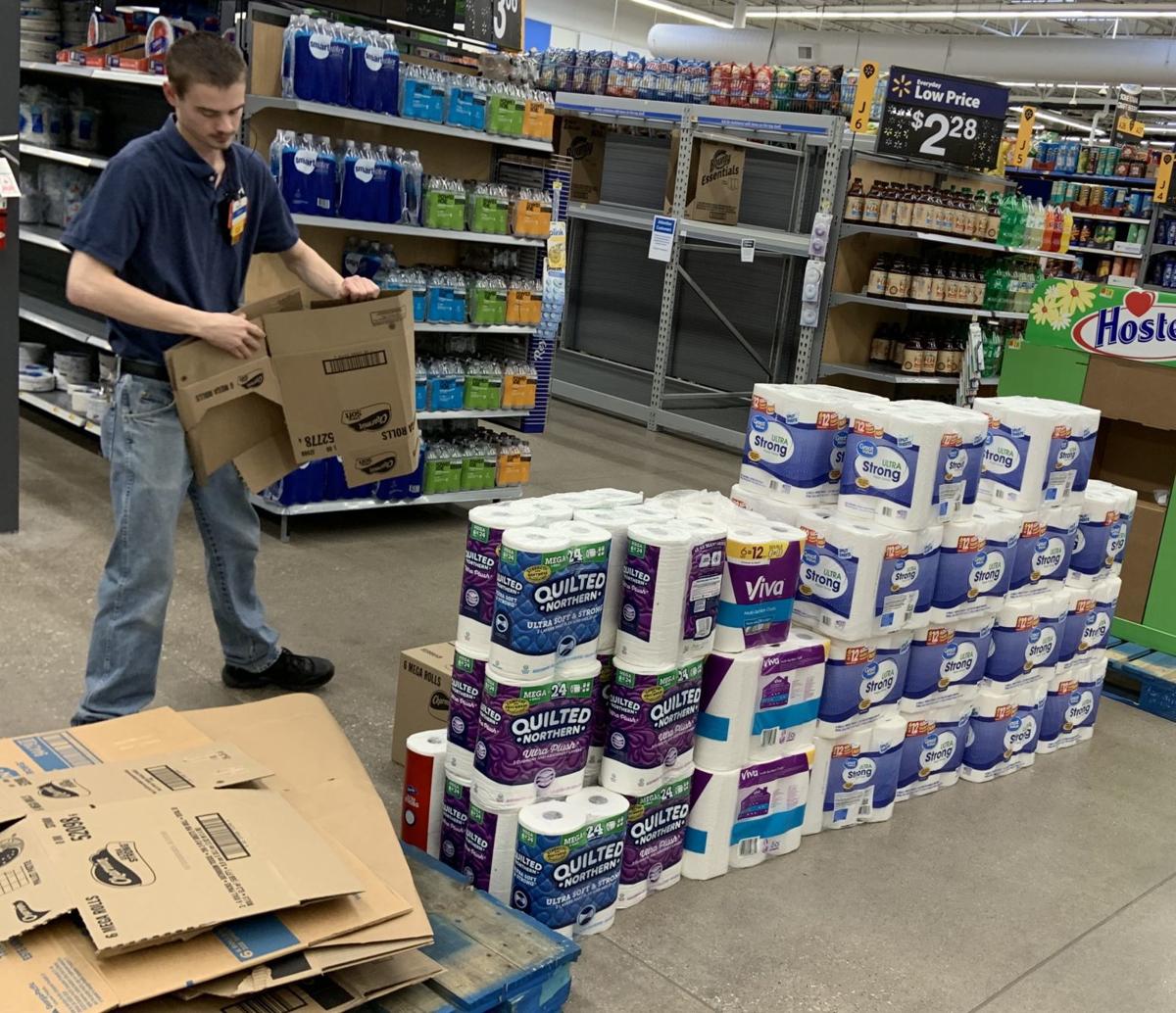 Walmart and Hy-Vee employees alike were working hard Friday morning to keep high demand items such as toilet paper, bread and bottles of water on store shelves, with some items even being placed in the middle of walkways for easy unpacking and access.

MUSCATINE — It’s a cool Friday morning and for many residents, especially those who are older or who may not have to work until later, it’s their weekly grocery shopping day.

But with concerns centered around COVID-19 and the supply shortages caused by it, getting a few items may seem like more of a hassle than ever. Even so, many shoppers are still trying to keep calm as they stick to only what they need instead of trying to stockpile.

Ed Vanderpool, a truck driver who was stopping by Walmart to grab some supplies for his drive to California, doesn’t consider the COVID situation to be too different from the hurricane and blizzard panic buying that he’s seen in the past. He added that he’s been through much worse and isn’t too scared.

“I’ve been doing this for over 30 years and I’ve been through a lot of stuff, it’s nothing new,” he said, “It’s just like chicken pox, mumps, measles and everything else. People are getting too excited.”

Another shopper, Heather Dusenberry, managed to fill up her whole cart despite some empty shelves. “This is the first time I’ve gone grocery shopping in a couple weeks… I got one of the last things of toilet paper.” While she did grab some extra things, her cart mostly held her normal amount of groceries. “I’m not worried, I just think everybody needs to use some common sense and follow what the CDC is saying… Hopefully we come out of this a little better and a little kinder, that’s what I’m hoping.”

Inside the store, old friends and former co-workers Karen Franzen and Doris DeFosse are still socializing, even as they stand a safe distance apart and wear gloves to protect themselves, along with their frequent handwashing.

“My daughter-in-law called me and said I’d better get here early for the senior citizen hour,” said DeFosse. Many stores, such as Walmart and Hy-Vee are dedicating the first hour of shopping to those who could be compromised by the COVID-19 virus. While she was unable to find flour, she was able to get other things she needed and added that she felt fine overall.

As for Franzen, because she lives with only her toy bander-poodle, she isn’t too concerned about stocking up.

“I’m pretty basic, I can do without something where some families would need them.” She added that she had a neighbor offer to pick up groceries for her, but declined, not wanting them to deal with having to go to multiple stores for certain items. While she wasn’t yet concerned about the virus, she did comment that all the panic shopping could result in a lot of spoiled food.

While many people across the country have tried to stock up in the past few weeks, stores have started putting limits on high demand items such as milk, bottles of water and, of course, toilet paper. One Walmart employee said that while they are getting a toilet paper delivery nearly every day, it’s often all gone within 15-20 minutes even with the ‘one package per person’ limit.

Julie Paulsen from Wilton managed to be lucky enough to get two small packs, one for herself and one for her sister. “I’m 64 and I’ve seen a lot of things in this life, but I’ve never seen this before ever,” she said, “and all I can think of is that it must remind people my mother’s age of the Depression.” However, she isn’t concerned and has faith that things will work out, warning that if everyone gives into the craziness of the situation, “we’re all gonna go. So get the basic essentials and help if you can, and that’s all you can do.”

Other items have been struggling to stay on shelves as well, such as rice or noodle products, sanitized wipes, bread and various meats. Down at Hy-Vee, many of the same shelves are empty. Still, Lonnie Brock was lucky enough to get the things he needed, including hand sanitizer. “I’ve got plenty at home anyway, so I don’t need to come and stock pile. I just want to leave some of it for other people so they can get it.”

While he isn’t as concerned about the virus or even the possibility of truck deliveries stopping, Brock did wonder if the producers and the factories making these high demand products would be able to produce enough at a fast enough pace. “They’re working hard though. Everybody’s working hard to try and get product to people. Everybody just needs to keep their heads cool, get what they need and see how things pan out.”

Brad Buckwoldt, a Muscatine teacher, admitted that he is stocking up slightly. “I normally try to go a week at a time, but I decided to get a few more groceries than I normally do.” He considered it a precaution, allowing him to “hunker down” for a bit longer instead of having to go out every week. As an educator, he was also concerned for his students and fellow faculty members. “It kinda throws us all of a loop here. It throws us off our normal routine.”

Carrie Truitt, who works at the Hy-Vee gas station, was a bit calmer as she shopped for her groceries for the week. Living out in the country, she was already used to preparing for situations such as snowstorms. Should a quarantine happen, she has six months’ worth of food. However, she is still making sure to be cautious and careful in light of the COVID situation.

“I don’t plan on my house burning down anytime soon, but we still have a fire extinguisher,” Truitt said, “So you’re just being cautious and still making sure you have everything you need. But I think it’s going to run its course and things will get back to normal. God’s in control” Adding a bit of extra light to the situation, her favorite treat wasn’t one of the high demand items, allowing her to get it easily. “I’ve gotta have my licorice,” she laughed.

MUSCATINE — Beginning Monday, April 6, 2020, 231st Street will be closed to traffic for a grading and paving project from Independence Avenue …

MUSCATINE — A Muscatine County employee was confirmed to have COVID-19 on Wednesday.

MUSCATINE — Every morning, the students of Saints Mary and Mathias Catholic School start their day off with morning prayer and morning announc…

MUSCATINE – During her daily update on the spread of the coronavirus in Iowa, Gov. Kim Reynolds announced Muscatine County has had its first d…

To celebrate the good things happening in Muscatine, the Muscatine Parks and Recreation Department has announced an online photo contest.

MUSCATINE — With many residents feeling stuck at home, it could be pretty easy for them to fall into boredom. However, the Muscatine Parks and…

DEWINTER: Good things are happening in Muscatine … because of great people

Just like the rest of you, these last two weeks have been extremely challenging for Muscatine Community College faculty, staff and students. L…

MUSCATINE – Throughout most of her life, Michelle “Shelly” Servadio Elias has served others in one form or another and now she feels the next …

MUSCATINE — With three reported cases of COVID-19, the new coronavirus, as of Monday in Muscatine County, the county Department of Public Heal…

“This is the first time I’ve gone grocery shopping in a couple weeks…" said resident Heather Dusenberry, "I got one of the last things of toilet paper.” Even against some COVID-19 stockpilers and a few empty shelves, many residents are still able to get the groceries they need.

Walmart and Hy-Vee employees alike were working hard Friday morning to keep high demand items such as toilet paper, bread and bottles of water on store shelves, with some items even being placed in the middle of walkways for easy unpacking and access.