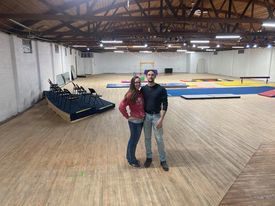 Dustin and Kari Finley show off the dance floor in the former Skateland building which they are currently using as a gymnastics studio and hope to repurpose for other community uses. 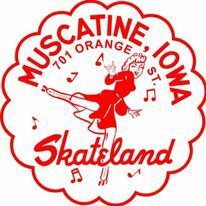 The former Skateland, which closed in 2000, had been a mainstay in Muscatine since the building was first built in 1950.

MUSCATINE — While Skateland in Muscatine closed its doors in 2000 and the building has mostly sat empty at 701 Orange Street for 20 years, a couple newly arrived in Muscatine hopes to breathe life into the building as they plan events for the 9,700 square foot building.

Dustin and Kari Finley bought the building exactly one month after they were married in November 2019. They were looking for space that Kari could use for her gymnastics classes named “Rock Tumble Roll (RTR),” and the large 70 year old maple skating and dance floor fit the bill perfectly. They had no way of knowing that just a few months down the road the COVID-19 pandemic would cause much of the country to have to close, including all gyms in Iowa.

“We bought it specifically for RTR,” Dustin said. “We had to shut down for a couple of months. We have been doing private lessons since then. That is pretty much what we have been doing for the last six months.”

The Finleys join a long line of entrepreneurs who have worked to find a new use for the old building. In past years it has served in many capacities, including a weight gym, a dance studio, and several others. After the Finleys purchased the building, a Tae Kwon Do class rented space from them. Dustin said the class was one of the victims of the COVID-19 pandemic as holding group classes became too difficult.

Dustin said he and Kari don’t use a lot of the building right now, and the gymnastics equipment on the dance floor can easily be moved and stored for events. They use the building a couple of hours a day and hope to bring in others to bring new uses to it.

One of the most immediate uses is a winter bazaar craft fair coming up Feb. 6 There were 36 slots open for the bazaar and Kari says the slots were quickly filled even after she only announced the event on Facebook. She said people from other states were contacting her about the bazaar. Dustin said if the weather was better, they would allow tables to set up in the parking lot outside.

With all the interest in the event, Kari has set up a Facebook page advertising the bazaar and is putting up almost daily posts profiling the vendors who have reserved spaces. She promises everything from seasonal décor, to artwork, to wood crafts and Tupperware. The Facebook page can be viewed at facebook.com/events/3564243750331812.

The idea for the show came about when the couple was discussing plans to move ahead. They had decided to post the idea on Facebook and see what kind of response there was. After posting the idea, within a few hours they had more responses that they could handle, and they had only posted it on a Fruitland chat site.

Dustin said during the bazaar, social distancing would be observed and they would strive to make the event as safe as possible for all guests. The couple realize that even with a vaccine quickly on its way to the community, people are still concerned about going out and bringing their children out to public events.

The couple hope to find uses for the building that will benefit everyone in the area, be it entertainment or a series of events or sales.

“We just wanted to bring this to the community” Kari said.

COLUMBUS JUNCTION — On Tuesday, Tyson Foods announced that the Tyson Plant in Columbus Junction is one of 35 plant locations that has been rec…

MUSCATINE — It was when Christina Kelly, founder of Healing Compass, hurt her back moving furniture that her life changed for the better.

MUSCATINE — In conjunction with UnityPoint Health-Trinity Muscatine, the Greater Muscatine Chamber of Commerce and Industry will host a second…

MUSCATINE – As part of its 35th year anniversary of citizen diplomacy, Muscatine Sister Cities will be holding a special event every month. Th…

Dustin and Kari Finley show off the dance floor in the former Skateland building which they are currently using as a gymnastics studio and hope to repurpose for other community uses.

The former Skateland, which closed in 2000, had been a mainstay in Muscatine since the building was first built in 1950.