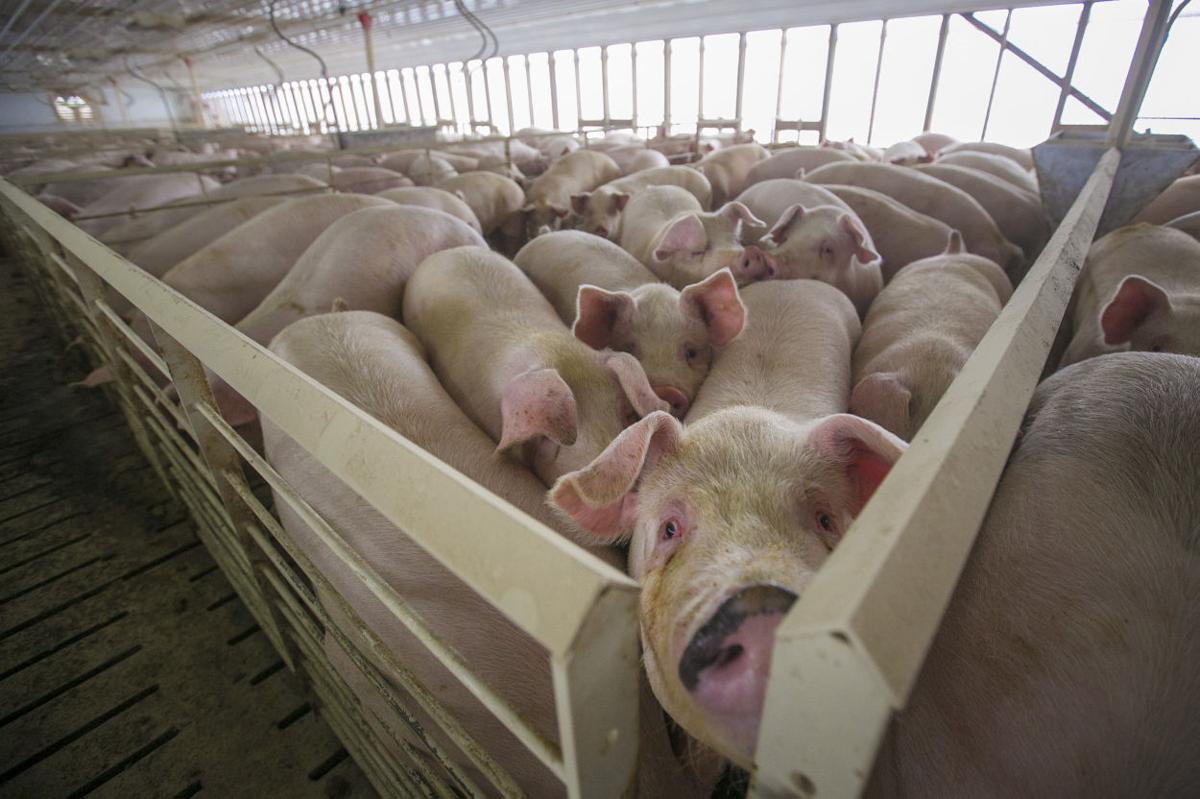 In this April 2016 photo, hogs fill a pen inside farmer Jamie Schmidt's confinement near Garner, Iowa. 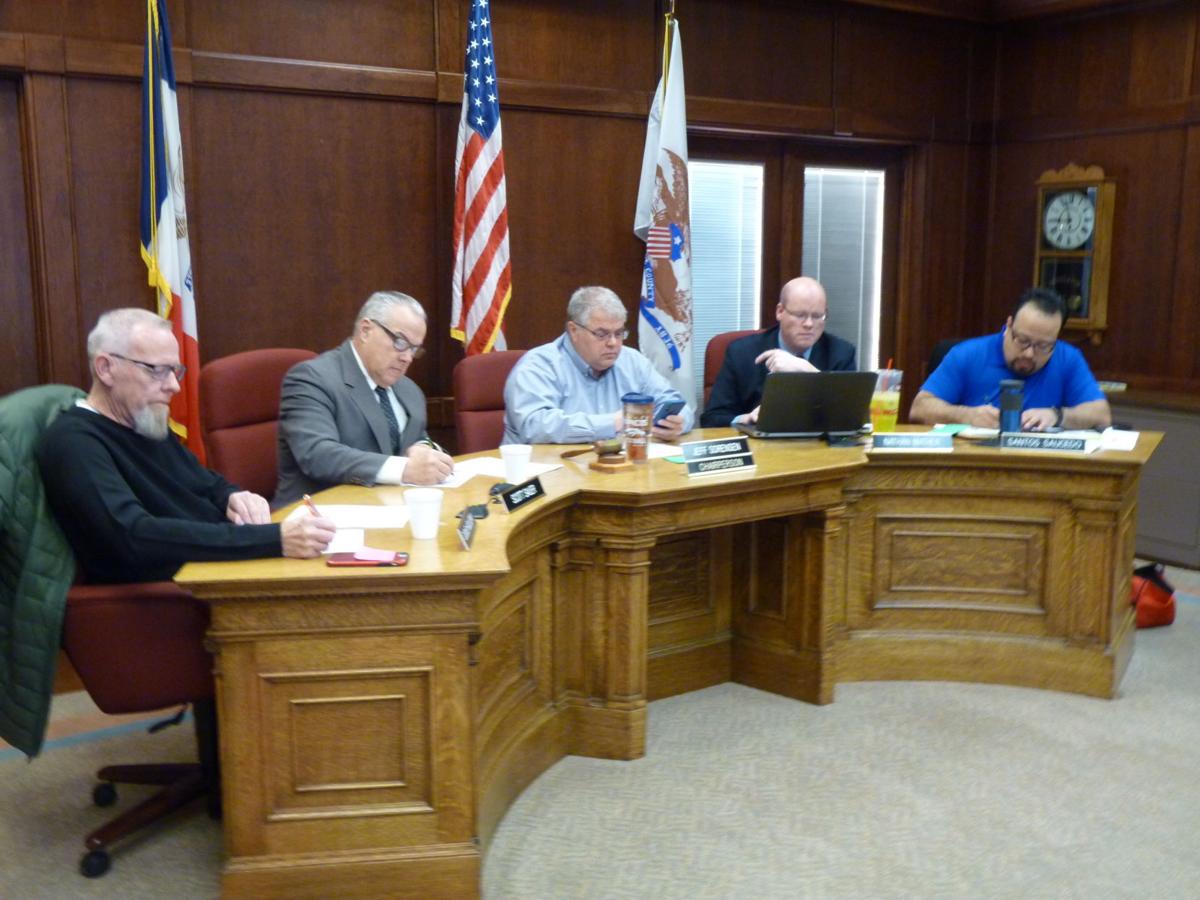 The Muscatine County Board of Supervisors held its annual re-organizational meeting Monday morning.

MUSCATINE — After spending close to an hour hearing concerns about a proposed hog confinement in Muscatine County, the Muscatine County Board of Supervisors had a split vote to approve a letter to the Iowa Department of Natural Resources (IDNR) regarding the permit application.

During Monday’s meeting, planning and zoning administrator Eric Furnas told the board he asked the IDNR it extend the amount of time the county had to comment on the construction permit application. While there was a public hearing at the supervisors’ meeting, another public hearing will be held at 9 a.m. Saturday at the 76 Township Hall for anyone interested in giving an opinion.

During the vote, supervisors Scott Sauer, Doug Holiday and Jeff Sorensen all voted in favor of approving the letter, while Santos Saucedo voted against it. Supervisor Nathan Mather abstained from voting, saying that the law firm he works at represents people on both sides of the issue and said it would be a conflict of interest.

At issue is a proposed hog confinement to be constructed north of Letts in 76 Township by Lucky LLC that will house 4,960 head of finishing swine. According to opencorporates.com, Lucky LLC was incorporated on Jan. 1 and Ryan O’Toole of Letts is named as an officer. Furnas told the supervisors the proposed plan for the confinement met the requirements of the state’s master matrix, a scoring system used to evaluate whether a confinement or feeding operation can be permitted. The supervisors held the required public hearing before the vote, despite the fact that the supervisors have no control over whether the confinement will be built and ultimately the IDNR will decide if projects can move ahead.

Several people expressed concerns about the operation, including smell, runoff, and truck traffic. Diane Furlong commented she owns the only vineyard in the county and she is concerned there will be issues with the confinement. Several people said they wanted more information and discussion before a decision is made.

Neighbor Lori Bashore commented she has two households that live across a field from the proposed confinement site. She also said she has two wells she is concerned about. She said that she has several issues she feels need to be looked at.

”One of the reasons we are in the country is I have two who have asthma,” she said.

Freedom Malik-Roberts, the removal energy advocate and humane policy volunteer for Muscatine County, also mentioned things like the reduction in property values for surrounding land and the link between confinements and antibiotic-resistant bacteria.

Furnas said he had requested the IDNR to extend the time the county can comment on the confinement by an additional 30 days. The time the county could have commented would have run out Wednesday. When asked if the public can make comments to the IDNR, Furnas said the department is a state funded department and he is sure there is a way state taxpayers can comment on decisions they have to make.

Saucedo said it would be at least a year before the confinement is built and ready to begin producing.

Muscatine residents press for MPW to change to renewable energy

MUSCATINE -- The planning continues at Muscatine Power and Water to switch from coal fired to natural gas fired power generation, and some loc…

MUSCATINE — In conjunction with UnityPoint Health-Trinity Muscatine, the Greater Muscatine Chamber of Commerce and Industry will host a second…

COLUMBUS JUNCTION — On Tuesday, Tyson Foods announced that the Tyson Plant in Columbus Junction is one of 35 plant locations that has been rec…

MUSCATINE – A Wapello man was pronounced dead Friday morning after a vehicle he was driving struck a tractor at Highway 61 and Fruitland Road.

Following a short public hearing that did not draw any local residents or comments, the Columbus Junction City Council approved the city’s Fis…

In this April 2016 photo, hogs fill a pen inside farmer Jamie Schmidt's confinement near Garner, Iowa.

The Muscatine County Board of Supervisors held its annual re-organizational meeting Monday morning.