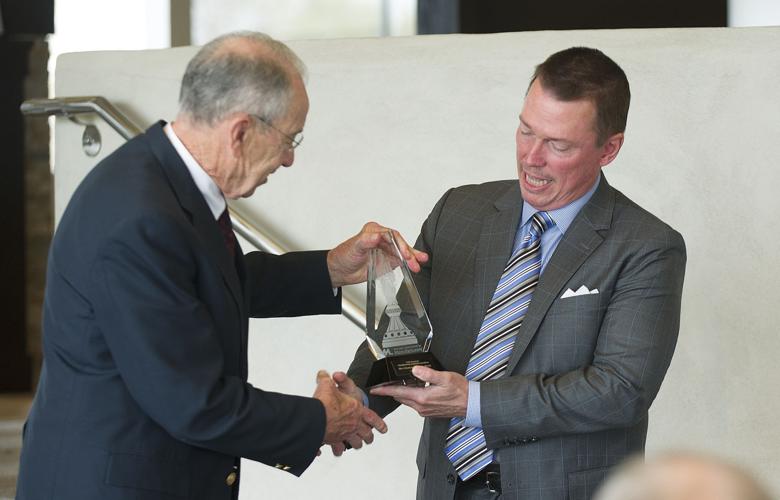 Sen. Chuck Grassley, R-Iowa, accepts a National Association of Manufacturers Award for Manufacturing Legislative Excellence from Gage Kent, chairman of the board and CEO of Kent Corporation and a NAM board member, Tuesday morning at Kent Corporation headquarters in Muscatine. 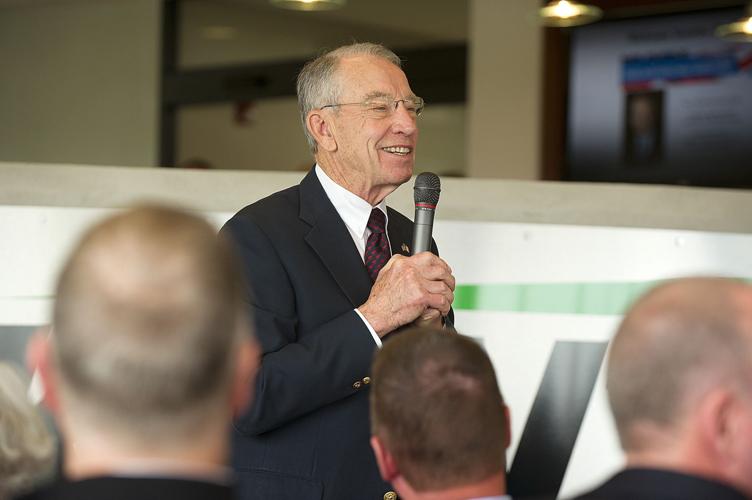 MUSCATINE — During a visit to Muscatine Tuesday morning, U.S. Sen. Chuck Grassley, R-Iowa, the chairman of the Senate Judiciary Committee, said he expects a Supreme Court Justice resignation within the year.

"I would expect a resignation this summer," he said.

A person would likely be nominated from the same list from which recently appointed Justice Neil Gorsuch was chosen, Grassley said, most of whom he said are well-qualified.

"I don't know about racial and ethnic divisions, but there's some very good females on there that would make good Supreme Court Justices as well," he said.

When questioned about the possibility of more resignations, he said it could be possible, but hearings would likely not be held during an election year. When former President Barack Obama nominated Merrick Garland to take the place of the late Justice Antonin Scalia, Grassley and other Republicans opposed holding hearings until the election was over.

"If there's a vacancy in the last year of a presidency, people ought to have a voice," he said.

He referred to a speech Joe Biden made in 1992, urging former President George H. W. Bush not to nominate a Justice during a contentious election year, if a seat were to come available.

"I took the same view that Democrats did," Grassley said. "You can be sure the Democrats are going to remind me of that."

Those listening chuckled, and went on to ask Grassley about business regulations. Many of those attending the event were NAM members and asked several questions regarding businesses, trade and regulations.

Grassley said this administration's position has been any time a new regulation is issued, old regulations should be examined to see if they are needed.

"For instance, let's say safety at the plant here, probably was passed by Congress in 1972," he said. "It hasn't been changed a whole lot, but the regulations might go up or down, but they tend to accumulate up and up and up."

Although he said regulators sometimes go beyond what Congress intended, regulations should be based on the intent of Congress when a law is passed.

Grassley was in Muscatine to accept a National Association of Manufacturers Award for Manufacturing Legislative Excellence presented by Gage Kent, the Chairman and CEO of Kent Corporation, who serves on the board of NAM.

"He's always been a friend to manufacturers," Kent said.

A protest is planned this week in connection with an incident that left one teen hospitalized and another in jail.

MHS inducts 12 more people into its Athletic Hall of Fame.

This Saturday, February 11, Muscatine High School (MHS) will be honoring nine athletes and three coaches through its annual Hall of Fame cerem…

Zhanna Slyviak and her mother, Maria, are currently making and selling traditional Ukrainian-style dumplings – also known as “Varenyky” - to t…

Employees from Allsteel in Muscatine donated time and money to MCSA in honor of Ron Hartman, who retired after 35 years of service in December 2022.

Sen. Chuck Grassley, R-Iowa, accepts a National Association of Manufacturers Award for Manufacturing Legislative Excellence from Gage Kent, chairman of the board and CEO of Kent Corporation and a NAM board member, Tuesday morning at Kent Corporation headquarters in Muscatine.