Trump, speaking live on coronavirus, puts Pence in charge of US control effort

EMT Aimee Boul and Louisa County Ambulance director Linda Verink show the 1998 ambulance in the Louisa County fleet. The service has recently decided to save money to try to replace the ambulance. 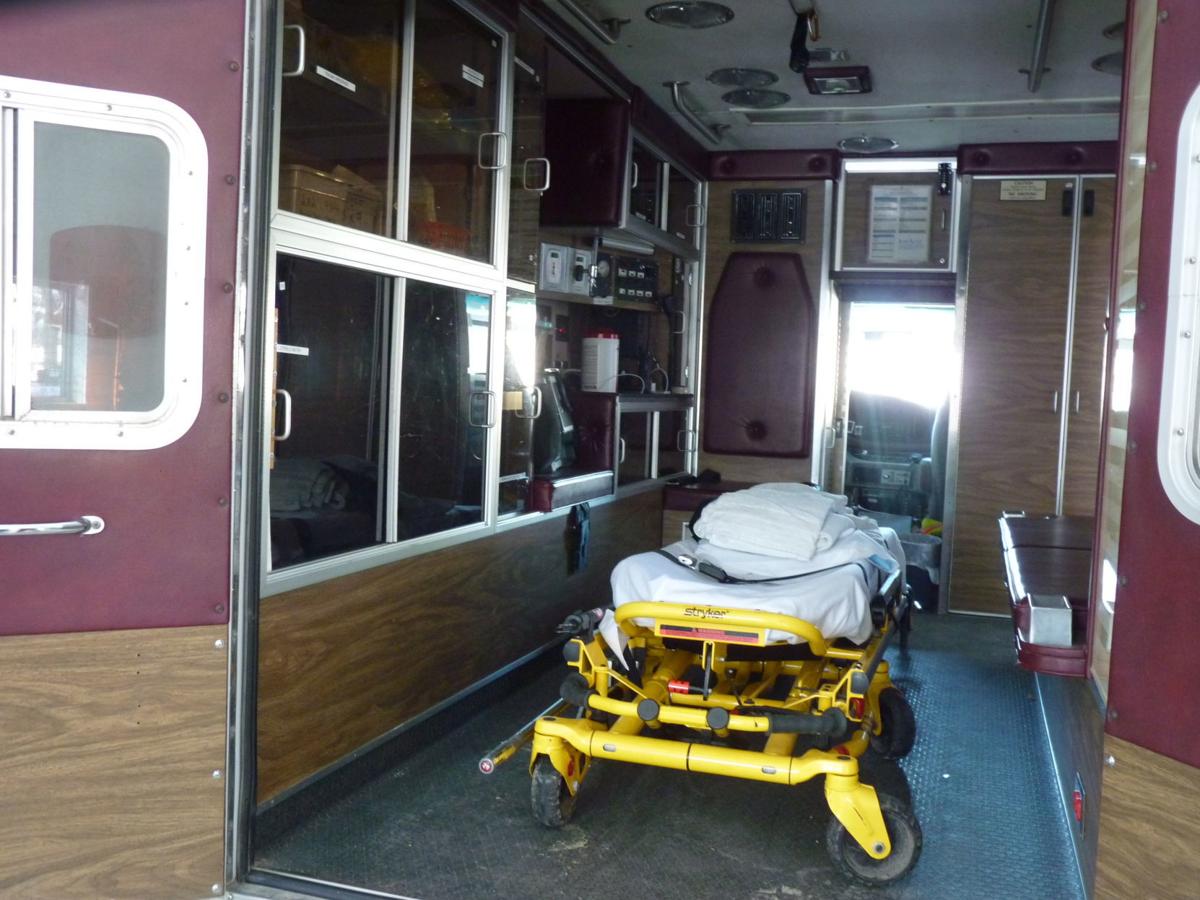 Louisa County's 1998 Ford ambulance includes wood paneling in the back, which is no longer common in ambulances.

COLUMBUS JUNCTION — Looking at the old ambulance, complete with 1990s wood trim in the back, which sits in the bay of the Louisa County Ambulance Service in Columbus Junction, director Linda Verink says that she and the ambulance had joined the service at about the same time.

The year was 1998 and Verink was taking her EMT certification classes. As part of the training, she was doing ride-alongs with EMTs in Louisa County. She recalls the ambulance being the vehicle she first responded to an emergency. The incident was a call where a subject was having trouble breathing. The subject was transported to the hospital.

“I was scared to death,” she recalls with a laugh. “Your adrenaline is pumping so hard. The training and experience has made a big difference.”

While she still has many years left to her career, the ambulance she began the career in is almost obsolete. Finding parts to service the 1998 Ford is no longer an easy thing to do. Verink said recently she had to replace the siren on the ambulance, which required her taking the existing 1998 siren out, taking photos of it, and sending the photos to a supplier, hoping they could find something that would fit.

Last fall it was determined that the ambulance needed to be replaced. The only problem with that is the price tag of a new ambulance. For the volunteer EMS department, the cost of a $250,000 ambulance is something that is several years away. The department is funded partially by property taxes, but does not receive money from the city.

“The ambulance isn’t that much but with some of the new rulings if you buy an ambulance it says you have to have special extra lift cots in them and those run about $50,000,” Aimee Boul, EMT and public relations chair, said. “So now we are looking at about $300,000. It just keeps getting worse.”

The first fundraiser scheduled since the decision to work on replacing the ambulance will be a trivia night at 5 p.m. Feb. 22 in the Muscatine National Guard Armory at 5901 Highway 61S. Tables are $80 for an eight-person team. There will also be a silent auction and a 50/50 raffle. Funds will go to the new ambulance rig and for protective gear for the paramedics.

It was also as an EMT hopeful that Verink learned about the “golden hour.” This hour — from the time of an incident until a patient arrives at a hospital — is the amount of time EMTs consider to have that they can get someone care and give them a better chance of survival. Verink said the closest ambulance services to the area are in Wapello, Washington or Muscatine, depending on where a patient is. In Columbus Junction, each is about a 30-minute drive.

Louisa County Ambulance has about 50 volunteer EMTs or above. The Columbus Junction headquarters is always staffed. Anyone calling at any time will be able to get an EMT or paramedic and an ambulance driver. The department regularly handles close to 700 calls per year, with the majority of calls being difficulty breathing, chest pain and falls.

People wishing to donate to the ambulance service can do so by contacting the service on its Facebook page.

Muscatine Board of Supervisors to cut Special Olympics funding

MUSCATINE — While the Iowa State Patrol has not released the name of one of the victims in an crash on Highway 38 on Jan. 28, a Muscatine woma…

MUSCATINE — Muscatine Power and Water is asking for the community’s input on its water tower’s new look.

MUSCATINE — Are the people living in an area mobile home park at the mercy of the new owner of the park? That is what a group of residents bel…

MUSCATINE — Three buildings are going up in Muscatine. Construction projects are underway on Park Avenue, 5th Street and Blaine Street that wi…

MUSCATINE — Little information is available about an incident on the Norbert F. Beckey (Highway 92) Bridge over the Mississippi River Saturday…

MUSCATINE – Sen. Joni Ernst will be at the Muscatine Hy-Vee, 2400 Second Ave. on Feb. 29 to meet and greet and thank her supporters in Muscati…

EMT Aimee Boul and Louisa County Ambulance director Linda Verink show the 1998 ambulance in the Louisa County fleet. The service has recently decided to save money to try to replace the ambulance.

Louisa County's 1998 Ford ambulance includes wood paneling in the back, which is no longer common in ambulances.