Members of the Muscatine Symphony Orchestra warm up their instruments before the start of rehearsal in April. 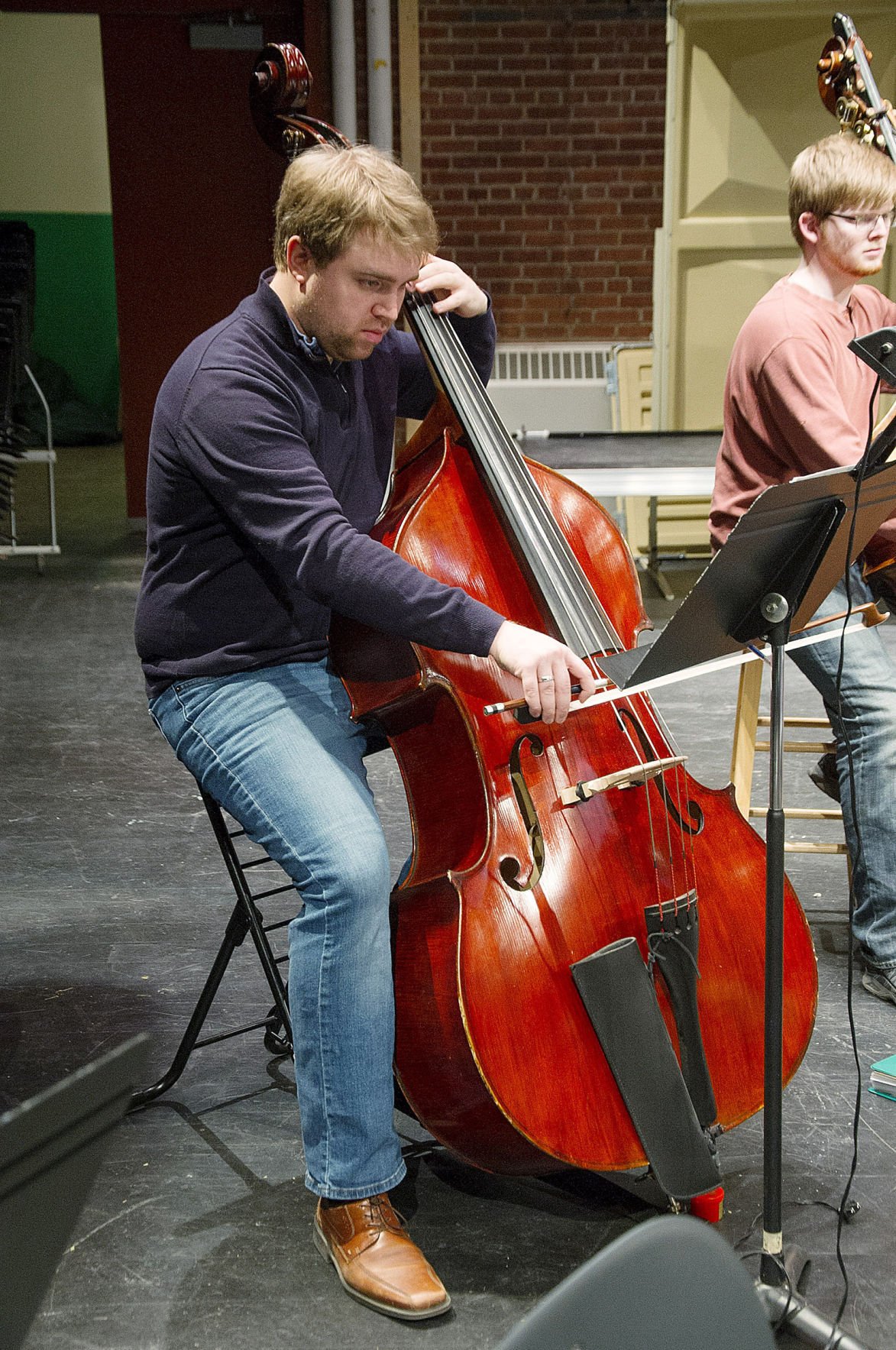 Jonathan Thoma, director of orchestras at Muscatine High School, also plays bass in the Muscatine Symphony Orchestra. They orchestra will be performing Saturday in Muscatine. 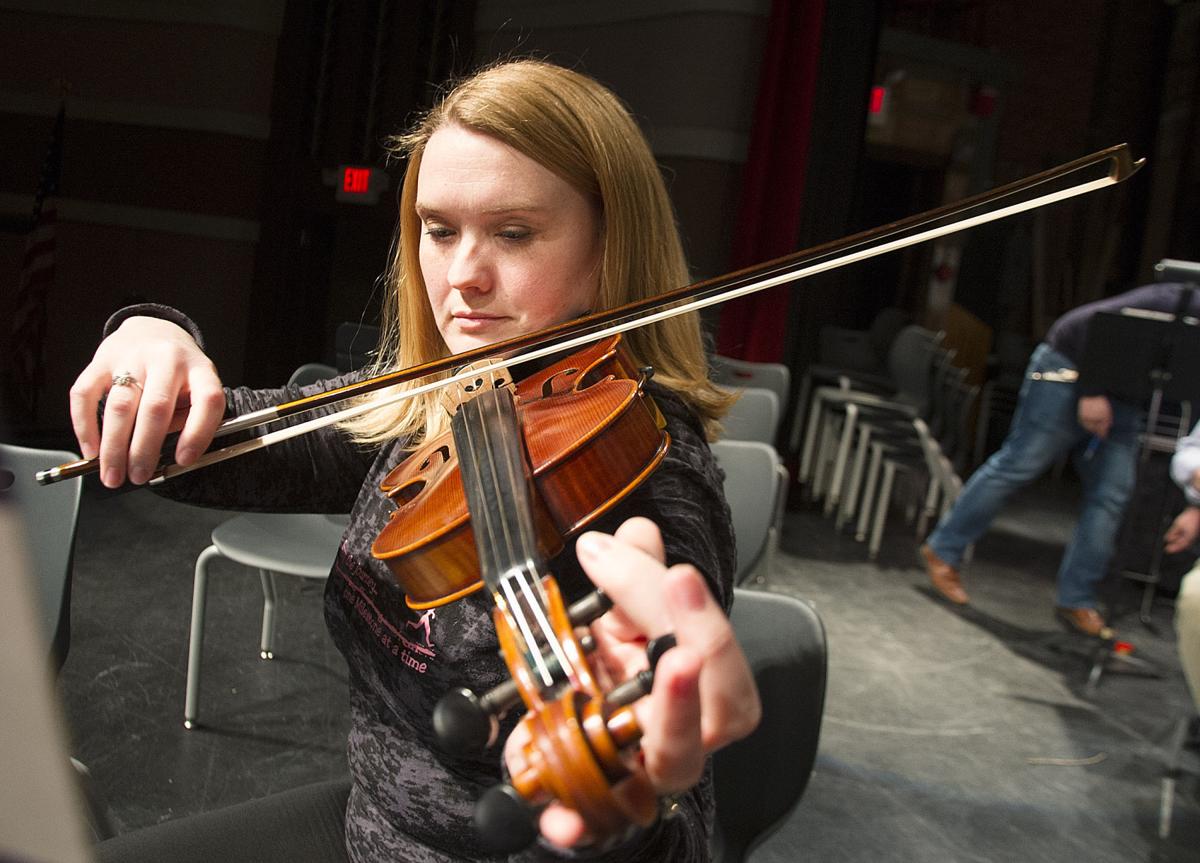 Rebekah Weber of Bettendorf gets tuned-up and ready for rehearsal with the Muscatine Symphony Orchestra Thursday evening in Muscatine.

MUSCATINE — Children make the best audiences. At least, that’s the opinion of Brian Dollinger, conductor and musical director of the Muscatine Symphony Orchestra.

“The exciting part about having families is hearing the kids react to things, you know, adults they’ll applaud after pieces,” he said, “but kids will react differently and it kind of adds a kinetic energy to the whole performance.”

So, with children and families in mind, Dollinger selected a concert that will introduce them to classical music through a performance of “Mozart’s Magnificent Voyage.”

The orchestra will perform the music, and actors from Classical Kids LIVE!, a Chicago-based nonprofit that created the show, will tell the stories.

On Thursday night, Dollinger and members of the Muscatine Symphony Orchestra were hard at work in rehearsal, putting the finishing touches on the performance.

Jonathan Thoma, who directs Muscatine High School’s orchestra, plucked his bass moments before rehearsal was set to begin. He’s played many of pieces before, he said, but not all of them were familiar.

“I like the Mendelssohn (piece). It’s just interesting and I’ve never played it before,” he said. “Sometimes, as a musician, it’s nice to get music that’s a bit off the beaten path.”

Taking a break from conducting, he said, helps him with his teaching.

“Every once in a while, it feels really nice,” he said. “It helps me remember what it’s like to be in the chair and I can go back to the classroom and have a sense of perspective, you know, know what they are going through.”

The orchestra will rehearse the concert with the actors from Chicago right before Saturday’s performance, practicing the pauses and their pacing.

Dollinger thinks classical music shouldn’t be more expensive than burgers or movies, and he wants children to experience classical music as early as possible. Since money can sometimes be a barrier to coming to concerts, the orchestra will only charge adults for the show. Children enter for free. The show will include familiar pieces like “The Marriage of Figaro,” and newer pieces, with stories that complement the music.

Parents, he said, will enjoy it, too.

“This concert and the whole show is stuff that people are going to recognize,” he said. “Some of them learned to play the piano pieces when they were little.”

What: Mozart's Magnificent Voyage, a concert for families and children.

Where: Central Middle School auditorium on 9th and Cedar streets

Tickets: Tickets can be gotten at Hy-Vee and at the door. Adult tickets cost $15, seniors pay $12. Students are free. For more information on tickets, call 264-2071.

MUSCATINE — Muscatine artist Chris Anderson has distinguished himself through murals and community projects. This holiday season he isn’t just…

MUSCATINE -- An annual holiday event for Muscatine residents is going back to basics as it celebrates its 37th year. On Friday, Dec. 3, from 5…

MUSCATINE — For kids hunting for a good time this holiday season, the Muscatine Parks and Recreation Department will hold its Candy Cane Hunt …

MUSCATINE – In December 2020, Peyton Story, 10, decided to use his birthday money to help people in need in his community. Nearly one year lat…

The new veterans memorial at Island Cemetery is complete with standing images of soldiers cut from steel, flags honoring all the services, a stone plaque, and a sign honoring several organizations that helped make the new and improved memorial a reality.

MUSCATINE — With a bid of $532,000 Jim Schroeder Construction was awarded a contract to replace a 100 foot bridge over Mud Creek on York Avenu…

Members of the Muscatine Symphony Orchestra warm up their instruments before the start of rehearsal in April.

Jonathan Thoma, director of orchestras at Muscatine High School, also plays bass in the Muscatine Symphony Orchestra. They orchestra will be performing Saturday in Muscatine.

Rebekah Weber of Bettendorf gets tuned-up and ready for rehearsal with the Muscatine Symphony Orchestra Thursday evening in Muscatine.