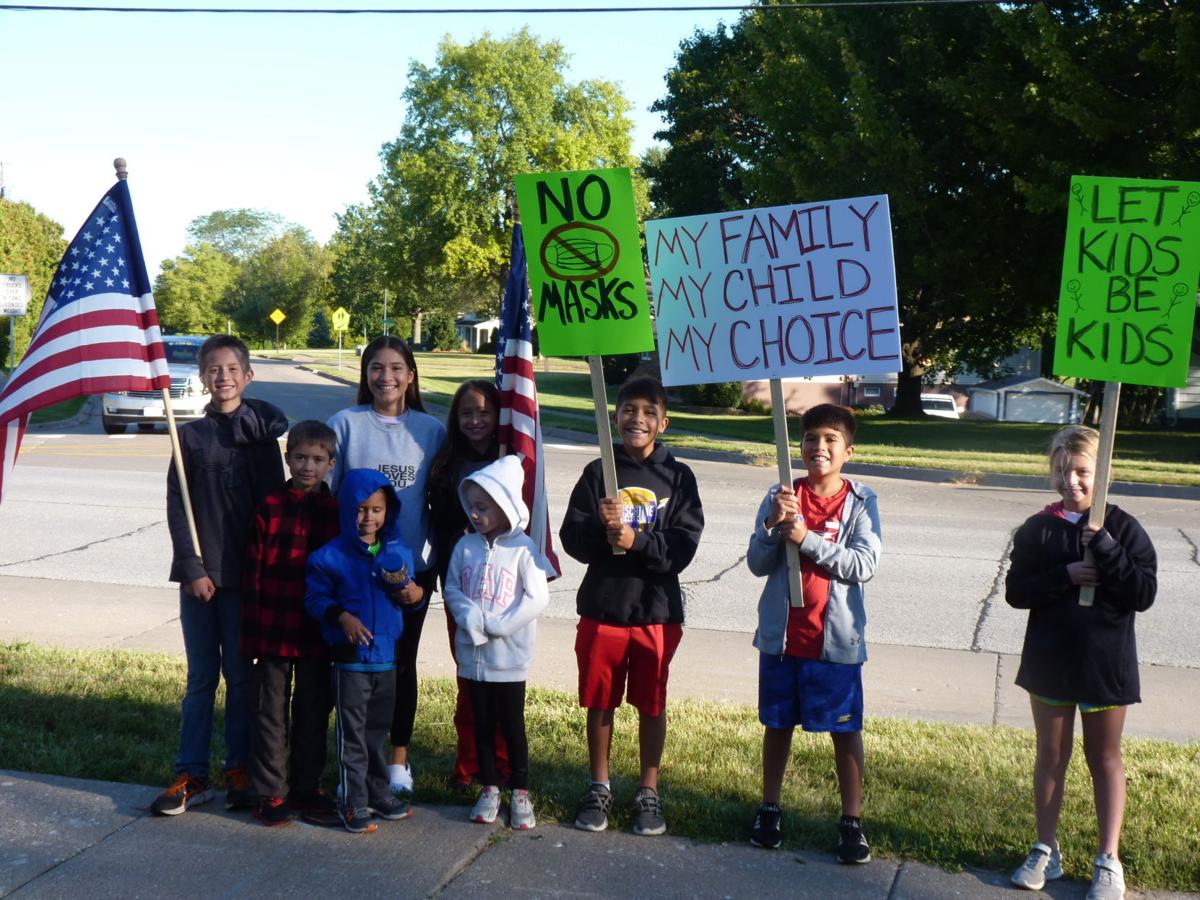 On Wednesday morning more than 60 people demonstrated at the Muscatine School District office against the school board decision to implement a mask mandate in the district. 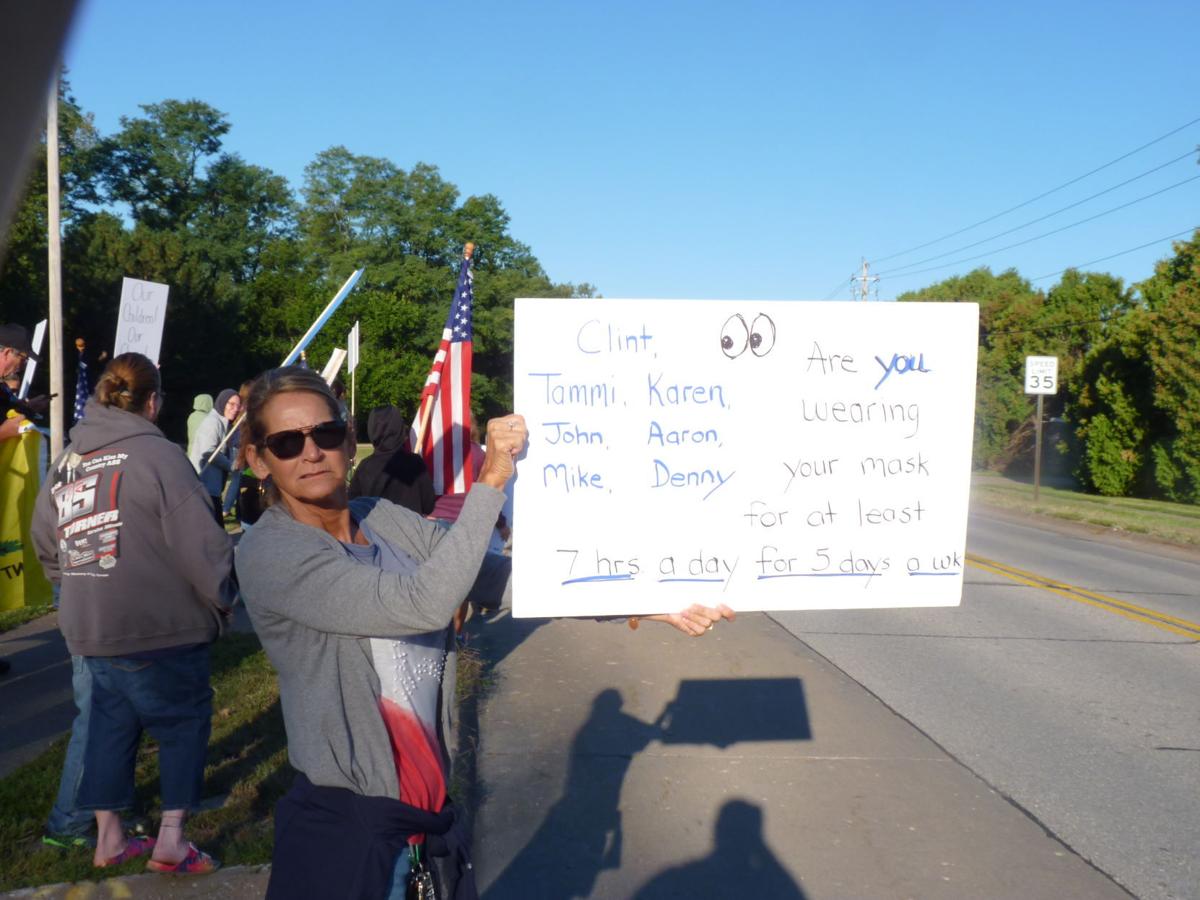 Tami Hultquist shows a sign to a passing car during a demonstration against the Muscatine School District mask mandate. According to information filed in federal court, 11 Iowa school districts, including Muscatine, reported more positive COVID-19 cases in the first month of the school year than during the entire previous year.

MUSCATINE — As the work day started at the Muscatine Community School District office on Wednesday, a group of over 60 people, including several children, lined the grounds along Mulberry Avenue to protest the school's mask mandate.

Protest signs and American flags were common as the people who came out to show their belief that wearing face coverings is a decision that is meant for parents, not the school district.

None of the protesters wore masks.

“I have a son and daughter-in-law who are teachers, my ex-husband’s wife is a teacher and she has cancer, and I have three children in grade school,” Tami Hultquist said as she held up a sign to passing cars. “I don’t care if people want to wear a mask — that’s fine. Please don’t make the people who don’t want to."

Hultquist was one of the people who spoke at the special school board meeting Friday, Sept. 17. During the meeting the school board voted 6-1 to require the use of face coverings for students in pre-kindergarten through sixth grade. School board members said this is because COVID-19 vaccines aren’t available to people that age and if they become available, the mandate would be reconsidered. The district encourages all students and staff to wear face coverings.

Masks are not required at sporting events.

The mask mandate began Wednesday. Muscatine School District Superintendent Clint Christopher said that most students arrived with masks and there had been no issues throughout the day.

“The majority of our students arrived at school today prepared for the day and with face-coverings,” Christopher said in a written statement Wednesday. “No students were turned away for not wearing a face-covering. The district will also continue to have face-coverings available in all PK-6 buildings for students that do not have their own. PK-6 families were contacted earlier this week and notified of options should they not want their students to wear a face-covering.

"For students who are not wearing a face-covering, we are working to provide adequate social distancing within the classroom. We know that the best place for all students to learn is in person, in the classroom with their peers. Our board of education also made it clear that they will re-examine this mandate once vaccines are made available for PK-6 aged students. The district respects the opinions of those who gathered this morning at our administration building, and we thank them for conducting their protest peacefully.”

During the meeting about 70 visitors were present, most of whom spoke against having a mask mandate. As part of the special meeting, a Google Form was offered for people to make online comments to the board. There were 1,072 responses with about 63% against a mask mandate.

Organizer Jesus Gonzalez said he was happy with the turnout to the demonstration. No police was present alongside the protestors, but several officers were inside the district office building. There were no reported incidents where officers were needed.

“This is just the first step to kind of gain momentum and get attention on what is happening here for the ones that were unable to attend the school board meeting,” Gonzalez said.

“We are letting people know this is America and we have rights,” Gonzalez said. ‘We have individual rights, we have parental rights and no school board can take that away from us. They are elected by the people for the people to represent us and they are doing the exact opposite.”

The Centers for Disease Control and Prevention recommends everyone age 2 and older wear a mask. Muscatine County has had a positivity rate of 12% in the last week and has had 6,415 total cases since the start of the pandemic. There have been 109 deaths in the county.

MUSCATINE — The Canadian Pacific Railroad Holiday Train won't stop in Muscatine again this year, because of the continuing threat of the COVID…

On Wednesday morning more than 60 people demonstrated at the Muscatine School District office against the school board decision to implement a mask mandate in the district.

Tami Hultquist shows a sign to a passing car during a demonstration against the Muscatine School District mask mandate. According to information filed in federal court, 11 Iowa school districts, including Muscatine, reported more positive COVID-19 cases in the first month of the school year than during the entire previous year.