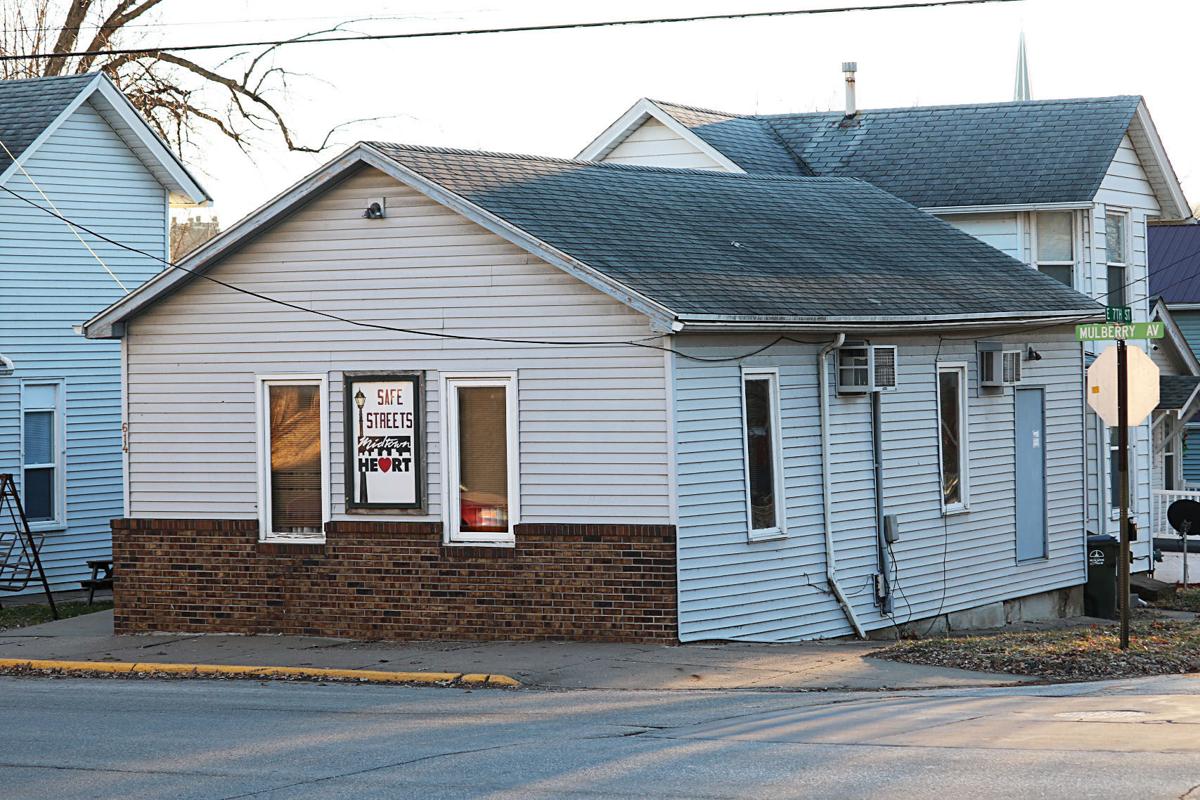 Formerly the site of Safe Streets in Muscatine, the building at 614 Mulberry Ave. will become a single-family home this year with Rebuilding Together Muscatine County taking on the task of remodeling it. 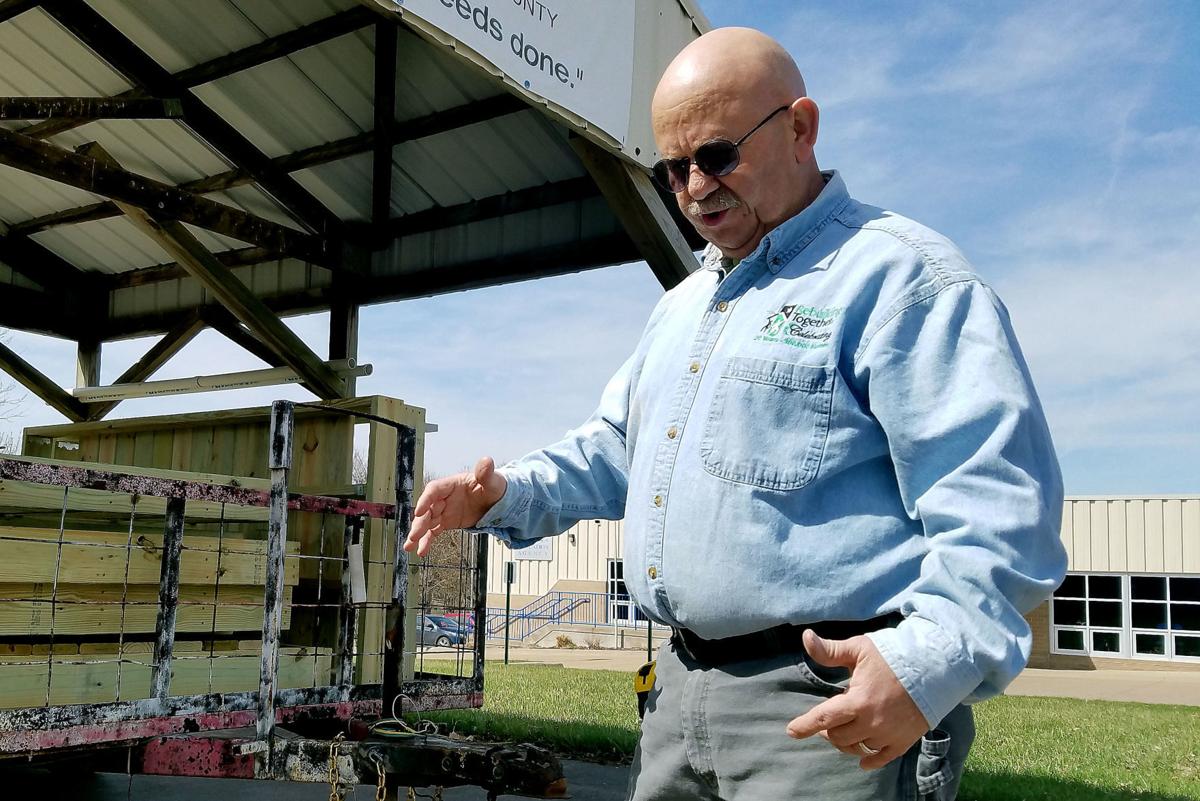 Frank Iliff, executive director of Rebuilding Together Muscatine County, along with a team of volunteers and contracted work crews, will convert a former office building on the corner of 7th Street and Mulberry Avenue, Muscatine, into a two-bedroom home.

MUSCATINE — Frank Iliff really cares about the Muscatine community, and he enjoys proving it.

“I’ve rebuilt it in my mind probably a hundred times,” he said of the property at 614 Mulberry Ave. Rebuilding Together Muscatine County will officially purchase Tuesday from the City of Muscatine. Iliff serves as executive director of the nonprofit and he, along with a crew of volunteers, has plans to convert the former Safe Starts office to a single-family home by mid-to-late summer.

Rebuilding Together is a national organization that aims to provide affordable housing for low-income homeowners. It also focuses efforts on rehabbing existing homes to revitalize neighborhoods and allow older homeowners to live at home longer. The group has worked on many projects over the years — about 100 throughout the county — but this is the first home it will take on.

“Let’s see how this one turns out,” Iliff said.

Turning the 740-square foot former office into a two-bedroom home is no small task. Shelving will be removed, a shower and kitchen sink will be installed and appliances including a refrigerator and stove will be brought in. Volunteers will complete much of the work inside and Iliff said electrical and HVAC system work will have to be contracted.

He’s hoping to keep the total cost in the low $20,000s, he said, but because this is the first time the group will tackle a whole home remodel, it may cost more.

“Projects always have surprises,” he said. “I don’t care for them. Surprises always cost more money.”

According to city documents, the building has been vacant since the end of 2017. The city put out a request for a proposal for the property this past summer, but received no responses. A purchase agreement was then negotiated between the nonprofit and the city for $250, with city council approving the purchase at its last session.

“It will be a nice little airtight house for somebody,” Iliff said.

After his experience helping build a porch for an elderly resident in need through a community relations committee at Monsanto, Iliff started the local Rebuilding Together chapter in 2007. He and about 14 other employees tore off the existing structure and built a new one. Iliff said the man was brought to tears by the act. “He said, ‘Frank, no one’s ever done this for me.’” The man had done many things to help the community, he said, and now “it was his turn” to be helped.

And since then, the organization has completed projects to make homes safer, especially for elderly residents. Major employers Musco Lighting and Kent Corp. have also partnered with the group on past projects. Work includes building ramps, repairing or constructing porches, installing windows, and electrical and HVAC fixes.

In the past, he said he’s requested grant funding from any resources he could find and has received money for the work from Community Foundation of Greater Muscatine, Muscatine Charities, Inc. and local churches. He said he’s looked “any and everywhere” for money to ensure the projects get done.

“I haven’t stood downtown with my hat in my hand,” he said, but considering the passion in his voice for the work he does, that might not be off the table.

With no formal training, Iliff has been building projects since he was eight years old. He said growing up, every time his family moved, he would be responsible for finding a place to make into a playhouse for his younger sister to “keep her out of mom’s kitchen.” He would clean up and convert old chicken or hog buildings where his sister could take toys make her own play kitchen. He said if his mother was missing a pan, they would always check the playhouse.

After retiring from Monsanto in December, Iliff is working for the nonprofit full time. Over the years, he has noticed how the outcomes of fixing up a home are more than the physical work. People build friendships, develop a deeper connection to their neighbors and neighborhoods, and inspire others to look at ways they too can benefit another or the community.

He said often times it can be too easy to drive through town, see a yard that needs mowed, a house that needs painting or a roof that needs some shingles replaced and not give it a second thought. Sometimes, the people residing there may need the help, but may not know how to get it.

“If you don’t do it, who will,” he said. And that attitude is also revealed in the organizations motto, “It just needs done.”

“If that house gets fixed up,” he said, “it not only helps raise the value of the home, but also of the community.”

Helping those in need and showing consideration for the community also prevents drug use and crime from creeping into neighborhoods, he said.

“In a cleaned up community, you’re not going to have meth,” he said. People wanting to use drugs “go to places where nobody is watching because nobody cares.”

“Everybody just needs to do a little bit,” he said, “and everybody can do something. It’s neighbor helping neighbor.”

MUSCATINE — With three reported cases of COVID-19, the new coronavirus, as of Monday in Muscatine County, the county Department of Public Heal…

MUSCATINE — Three people were hospitalized Friday after a two-vehicle crash at Highway 6 and Moscow Road.

Muscatine playground equipment closed to public due to COVID-19

MUSCATINE — As of Tuesday, public playground equipment will be closed to the public through Thursday, April 16, 2020, according to the Muscati…

MUSCATINE – With a second case of COVID-19 confirmed in Muscatine County, Mayor Diana Broderson stressed the need for people to continue pract…

MUSCATINE – In response to the novel coronavirus (COVID-19), the Muscatine Police Department is making some temporary changes to operations in…

MUSCATINE — The city of Muscatine will follow in Muscatine County’s footsteps and close its buildings to the public, the Muscatine City Counci…

Muscatine businesses are feeling the impact of Covid-19

MUSCATINE — With COVID-19 spreading across the U.S., empty shelves and empty tables are becoming a common sight in Muscatine.

Formerly the site of Safe Streets in Muscatine, the building at 614 Mulberry Ave. will become a single-family home this year with Rebuilding Together Muscatine County taking on the task of remodeling it.

Frank Iliff, executive director of Rebuilding Together Muscatine County, along with a team of volunteers and contracted work crews, will convert a former office building on the corner of 7th Street and Mulberry Avenue, Muscatine, into a two-bedroom home.