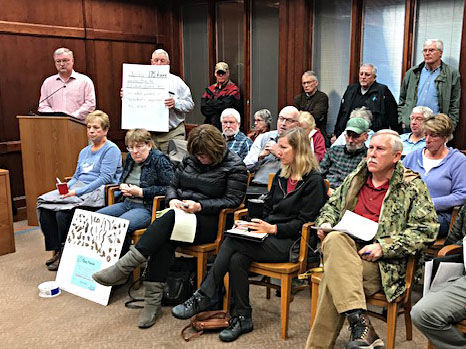 A committee of concerned county residents gathered to hear more information about the future of the use of slag, a by-product of steel, on county roads. 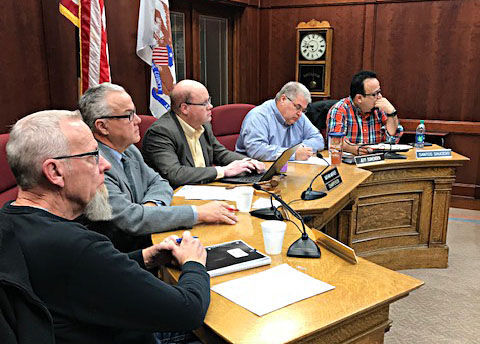 In this January 2019 file photo, Muscatine County Board of Supervisors Chairman Nathan Mather responds to information presented by a residents group about the dangers of slag.

A committee of concerned county residents gathered to hear more information about the future of the use of slag, a by-product of steel, on county roads.

In this January 2019 file photo, Muscatine County Board of Supervisors Chairman Nathan Mather responds to information presented by a residents group about the dangers of slag.

MUSCATINE — Discussion on the fate of slag made for another another tense morning between the Muscatine County Board of Supervisors and concerned residents.

A back-and-forth argument took place Monday morning on when information on the toxicity of the material should have been made available to the board.

The citizens slag committee, represented by residents Doug Hoag and Daryl Sywassink, claimed local resident and scientific consultant Ed Askew, who was in attendance but was not permitted to formally present information on slag before the board Monday because supervisors would not allow the item to be added to the agenda.

According to Hoag, supervisors requested a copy of the report Askew was going to present at the meeting, seven days in advance — a request Hoag said "has never been asked for before or required before and I don't know why it was required today for these public meetings."

Supervisor Jeff Sorensen clarified that requesting information in advance has always been a requirement of the board. He said the slag committee may not have been asked about it before, but "certainly, it's common practice for the board to get that (information)."

Sywassink said Chairman of the Board Nathan Mather called him Sunday evening to ask what would be brought before the board Monday morning. Mather said after attempts to get a copy of the report that would be presented, Askew and Sywassink would not give him the information.

Sywassink argued that there has been discrimination against Askew and censorship by not letting him present before the board. He also said he thought there has been some intimidation. For those reasons, he said he will file a formal complaint with a sunshine group that investigates reported violations of Iowa's Open Meetings Law, "because I think the spirit of the law has been violated here."

Hoag presented information from the report in question provided by toxicologist Stuart Schmitz with the Iowa Department of Public Health. Hoag said Schmitz did an analysis of the material based on information recently provided to him from SSAB Inc., by Askew and that Schmitz worked with the supervisors in 2008 when the use of slag was being considered. SSAB is the steel manufacturer that supplies the slag to Harsco, which sells it to the county.

Schmitz "recalculated the adverse health effects for children and adults for the slag this county uses," Hoag said, "and found that the concentrations of metals are up to 124 times greater than the maximum allowed limits for children," and children's exposure to the material should be limited to exposure to slag to less than two to three times per year. The results also showed concentrations of the metals are 1.75 times greater than the maximum allowed limits for adults, he said. In the report, available on Askew's website, Schmitz writes specifically about manganese in the material.

"After reviewing the information that you provided on the slag that is being deposited on roads in Muscatine County," he wrote, "I would conclude that children living and playing in areas where the slag was deposited could experience adverse health impacts from the manganese within the slag."

"So, I think it's pretty clear that we've run into and found the information that you guys have asked for," Hoag said. "It is harmful to children. It is harmful to adults. So, we do need to get this slag stopped."

Mather has maintained that the board has sought evidence about issues with the slag, including its potential toxicity, and said the county hasn't used slag on the roads since June.

Board chairman Nathan Mather said he would include a motion on next week's agenda for supervisors to vote to discontinue the use of slag.

"Will that satisfy you?" he asked the group.

The group collectively said that wasn't enough. Askew said there are years worth of the material already on the roads that needs to be properly cleaned up.

"Tell me exactly how we're going to do that," Mather said.

Following an example from Askew of mass contamination in Times Beach, Missouri, where the community was completely evacuated due to dioxin contamination, Mather proposed a plan to address the issue and said, "I think it's appropriate for the board to consider suspending the use of slag."

Testing every property in the county would be costly and time consuming, so Mather asked the group if each homeowner would agree to have samples collected from their properties on affected roads to test for an toxic materials. The group agreed to the collection of samples. The board meets at 9 a.m. Monday.

"I don't see anything wrong with gathering information," Mather said, "and I do want to thank you guys for presenting — what I hope won't be taken the wrong way — evidence of actual, possible contamination."

He said he would like the board, slag committee and interested landowners to work together to resolve the issue and apologized if he came across as "antagonistic."

"We have some evidence,” he said, “and I think we can begin to formulate an action plan on this point.”

Want a summary of today's news? Sign up for daily headlines.