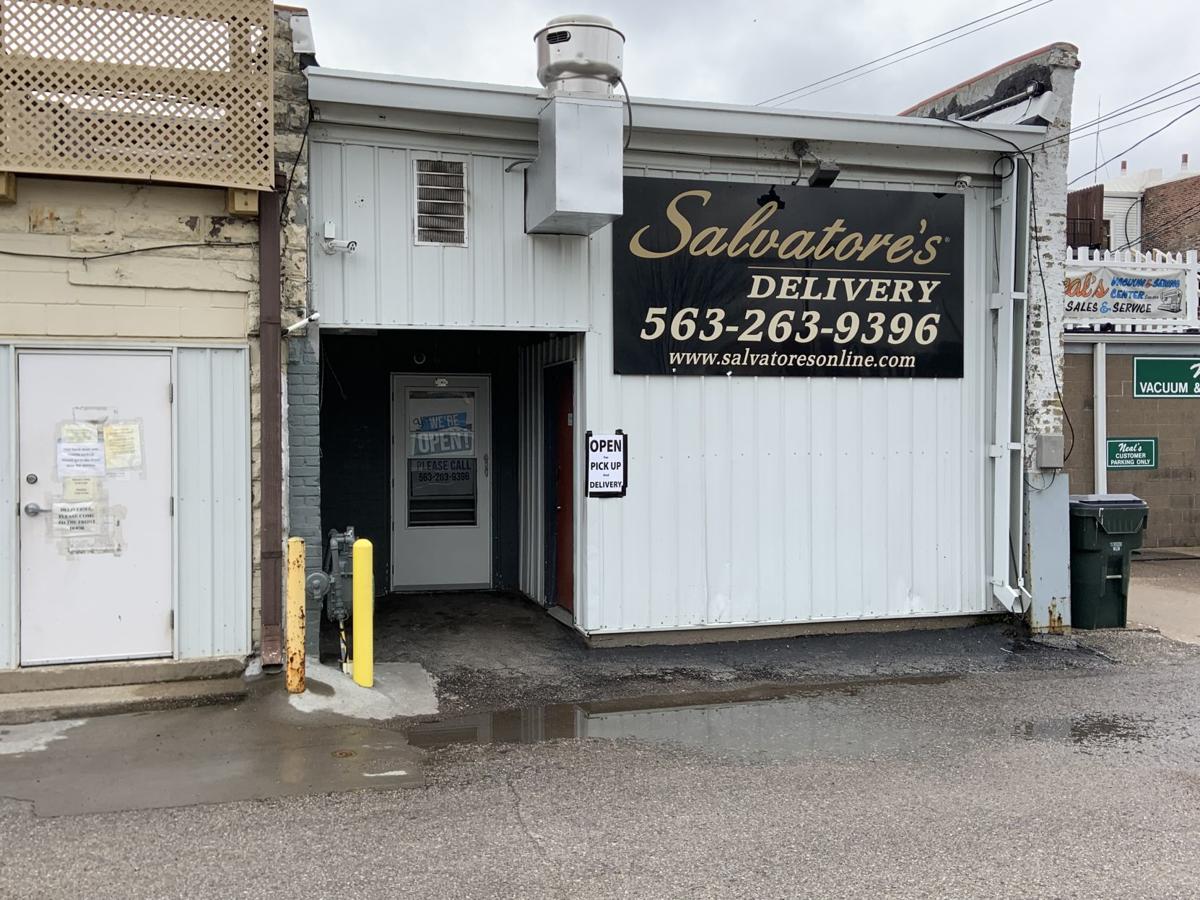 While some Muscatine restaurants are reopening their dining rooms with limited capacity, Salvatore's is currently forced to keep theirs closed during construction and instead have customers pick up their food at the back door — which according to owner Claudio Vitale is a lot harder for some residents to find. 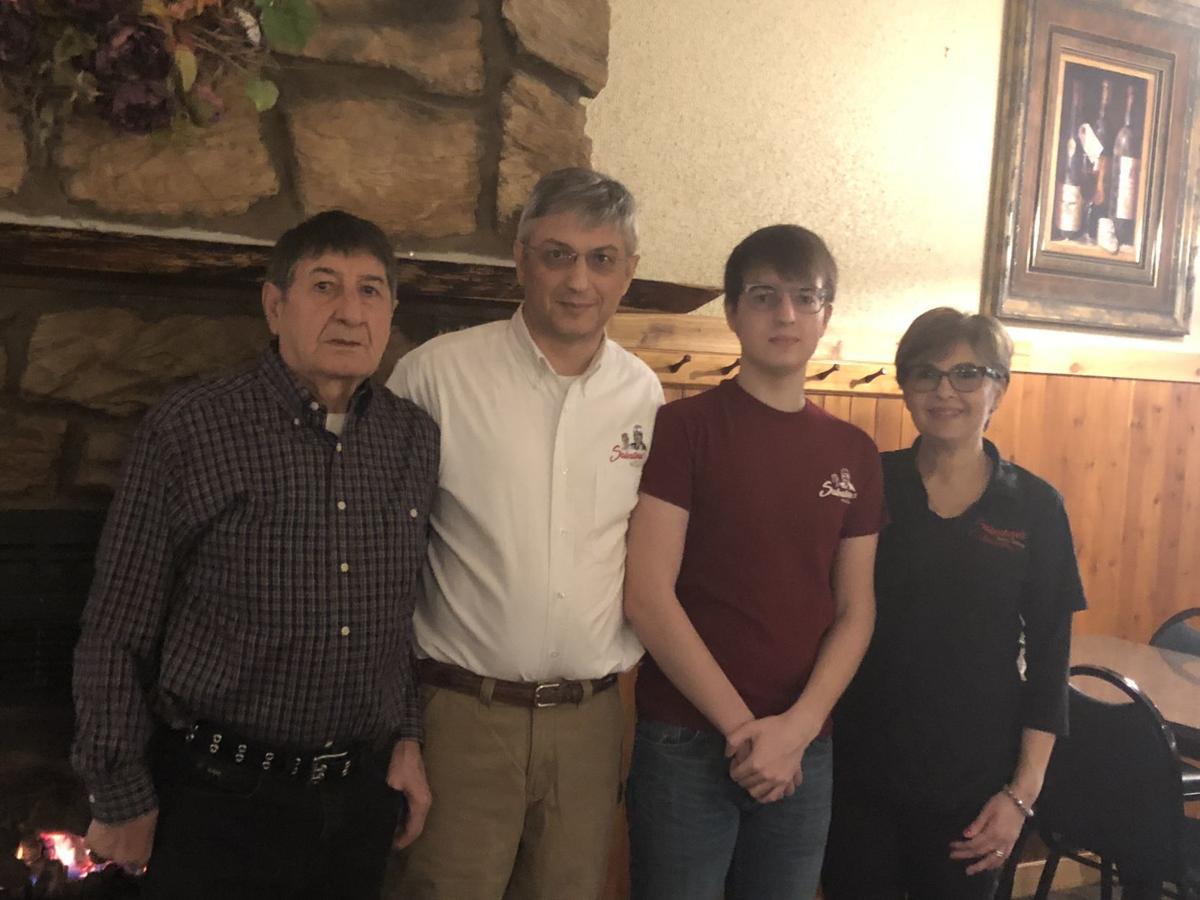 It's a family affair at Salvatore's by Papa Reno in downtown Muscatine. From left are the founder, Papa Reno Vitale; son Claudio, who runs the restaurant; son Anthony; and Claudio's wife, Domenica. All four work at the restaurant.

MUSCATINE — Opened in 1985, Salvatore’s Ristorante by Papà Reno has been a destination for diners from the Muscatine community and beyond, attracting patrons from the Quad-Cities and even Chicago.

However, because of not one but two long-term challenges, the Italian eatery may be at risk of closing its historic doors for good.

“I’ve never been a person to complain, but this is really hurting my livelihood, my family’s livelihood and my employees’ livelihood,” owner Claudio Vitale said.

Vitale was forced to join other Muscatine restaurants in closing the dining section and only allowing pick-up and delivery because of the coronavirus.

“The COVID pandemic on its own has been devastating to morale,” he said, having had worries about people getting sick. As such, he has been very diligent in following hygiene and social distancing guidelines. “I used to be a clinical researcher, so I have a reputation in town.”

Despite taking a hit however, Salvatore’s had managed to get good support during the beginning of the pandemic with both orders and gift card purchases coming in, allowing Vitale to break even and continue paying his bills and employees.

“People were happy, they’d come in and keep their distance, it was just beautiful,” he said.

However, another challenge was just around the corner.

Having ran his family’s restaurant for years, Vitale has grown to enjoy the downtown area where it resides.

“The different stores around us makes it kind of a unique atmosphere,” he said.

That location, however, has left him with another obstacle.

In the beginning of April, construction began on 2nd Street, and Salvatore’s front door entrance was blocked off because of the work being done on the street and sidewalk. Vitale said he was originally told that the construction would only be 4-6 weeks.

Now he’s been told it could last until July.

“They just don’t understand that there’s two restaurants on the block that are struggling,” he said, with the other restaurant being Riverside Café.

Vitale and his crew have tried to direct pick-up customers around the blocked off areas by posting alternate route directions on Facebook and sometimes directing them on the phone, but even that isn’t a perfect solution.

With the only way to get into the dining room now being through the kitchen, Salvatore’s is unable to allow dine-in customers for health reasons. Other hazards have been an issue, such as the now jagged sidewalk around the restaurant being a tripping hazard and the streetlights near Salvatore’s not being lit.

“The only lights that are on is my storefront and maybe the sewing shop next to me. Down the street though, it’s completely pitch black.”

Vitale added they have tried to convince people to do delivery, but bad experiences with companies such as DoorDash have made customers want to just pick their meals up themselves.

“And that’s when the ordeal starts. A lot of people don’t even know the construction is there, and when they do come down to pick up their food, they’re just frustrated,” he said.

Though he has talked to city council members and the mayor, who have understood his struggles and tried to help him, Vitale said that talking to the engineers on the project has been a different story entirely, making it seem like they’re in no hurry to finish and only offering excuses.

“They just don’t care about local businesses. COVID-19 was nothing you could fight against, but this is a man-made disadvantage for us that could easily be fixed, and I would hate to close down because of something that could have been avoided.”

Believing in tradition, Vitale isn’t interested in moving his restaurant uptown or to a mall or shopping center.

“There’s a lot of unique areas and a lot of cool people downtown,” he said, adding that he owes everything to his father, Papà Reno, who started and previously ran Salvatore's and is eager to work there again.

Despite worries that this one-two punch of a pandemic and construction could be the ultimate finishing blow for his restaurant, Vitale hopes that bringing awareness to these issues would help make his community understand his situation, encouraging them to support him and Salvatore’s Ristorante by Papà Reno through these difficulties.

He also encouraged his community to hold strong as they follow the public health guidelines and to keep an eye on downtown businesses.

“We’ll get through this all together, but only if we do the right thing," he said.

Trio charged in alleged robbery ring after being arrested Sunday

FAIRFIELD — Three Muscatine County residents were arrested early Sunday and have been charged with conspiracy to commit robbery, a Class C fel…

MUSCATINE – There were very few words to describe the anger, the pain and the outrage Miyah Payne felt when she picked up the latest edition o…

Artist Christopher Anderson said the mural he started last fall on the side of the building at 122 W. 2nd St., which is inspired by a poem by …

TanTara's Hawkeye Hauler drops off over $10,000 worth of food donations at Salvation Army

MUSCATINE — While this Monday started off cloudy and a little cold and rainy, there were still smiles all around as the Hawkeye Hauler was unloaded.

DRURY TOWNSHIP, Ill. — Just about five miles outside of Muscatine in the Drury Township of Rock Island County, one local cemetery has decided …

Honoring Memorial Day with a bang

While some Muscatine restaurants are reopening their dining rooms with limited capacity, Salvatore's is currently forced to keep theirs closed during construction and instead have customers pick up their food at the back door — which according to owner Claudio Vitale is a lot harder for some residents to find.

It's a family affair at Salvatore's by Papa Reno in downtown Muscatine. From left are the founder, Papa Reno Vitale; son Claudio, who runs the restaurant; son Anthony; and Claudio's wife, Domenica. All four work at the restaurant.