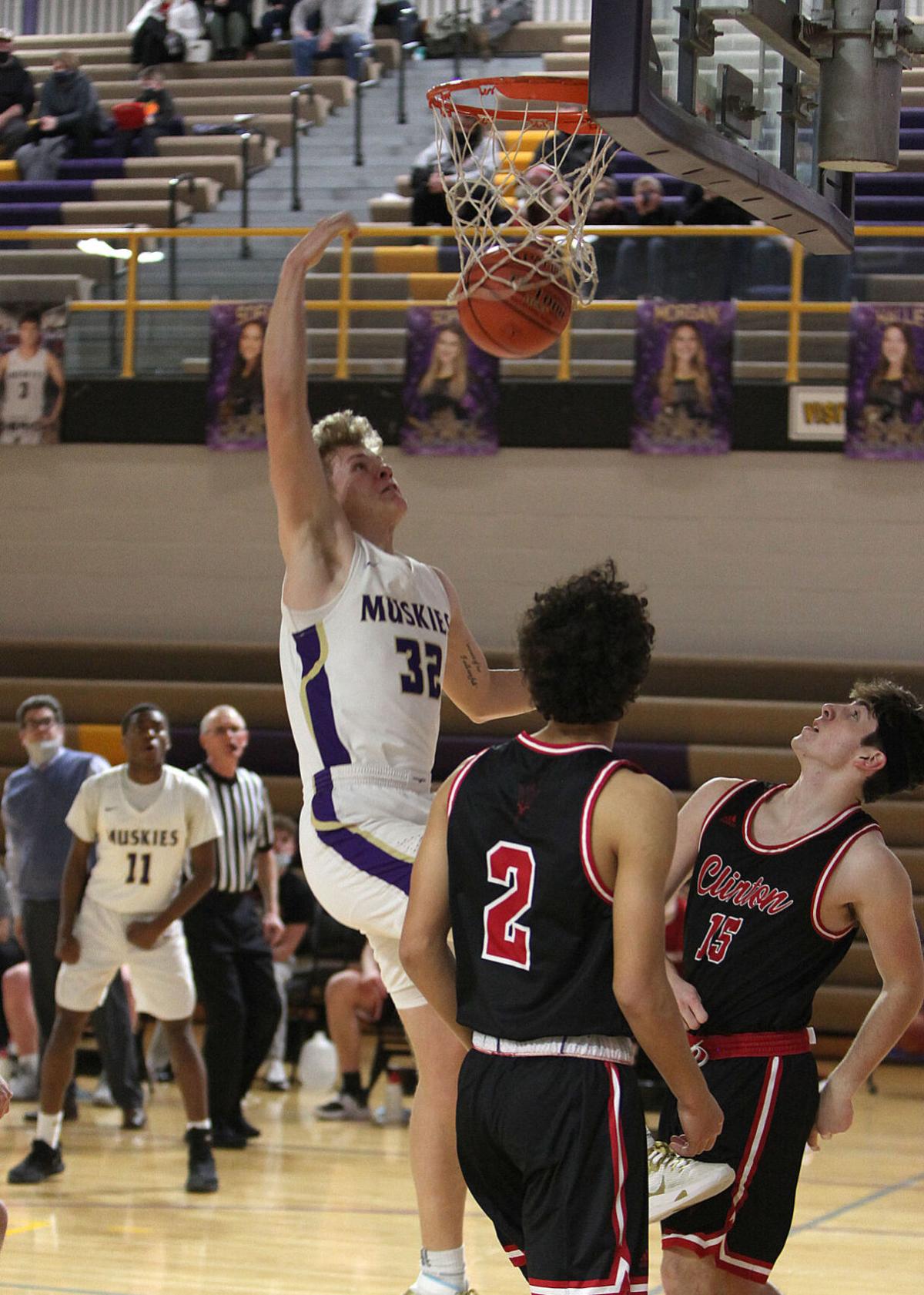 Muscatine's Josh Dieckman slams the ball through the hoop against two Clinton players during Monday night's Class 4A substate game. 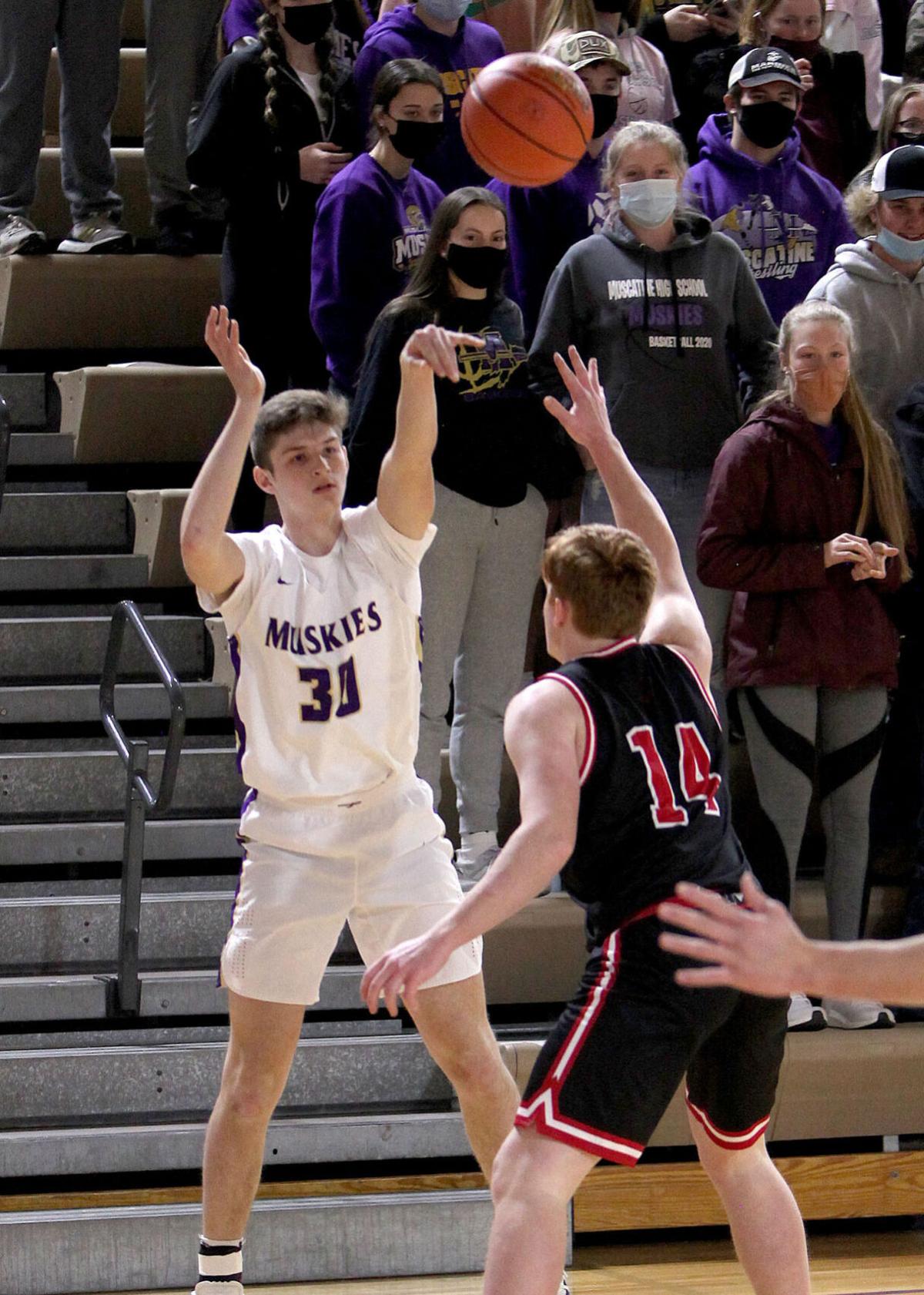 Waker Cler of Muscatine loops a pass over Clinton's Logan Mulholland (14) during the first half Monday night.

In Muscatine's last postseason win, current Iowa Hawkeye Joe Wieskamp went for 36 in a 58-55 Muskie regional final win over Linn-Mar on Feb. 27, 2018, to lead the Muskies into the state tournament.

It’s been quite a journey for the current senior class, several of whom cut their varsity teeth as sophomores when the Muskies went 0-21.

Monday night was as balanced an offensive attack as Muscatine has had all season. Six players ended in double figures as the Muskies took down Clinton  at Muscatine High School in the Class 4A Substate 5 first-round game by an 85-66 final.

“We were clicking on all cylinders on offense tonight, no doubt,” Muscatine head coach John Windham said. “Offensively, it was nice to have (balance). We’ve relied on those six guys to score all year long.”

Muscatine advances to the 4A Substate 5 semifinal, where North Scott awaits. That game will be at 7 p.m. at The Pit in Eldridge. Muscatine has beaten the Lancers twice this season, but those two games were decided by a combined eight points.

Muscatine (10-10) almost had four players reach double figures in the first half alone in seniors Josh Dieckman, Noah Yahn and Reed Ulses along with junior Dante Lee. All finished the opening two quarters with at least seven points.

Yahn took over in the third quarter, going 6 of 6 from the field, including three 3-pointers. The senior had 17 points in the quarter and finished with a game-high of 25.

“It felt like the shots were going to go in before I even took them,” Yahn said.

Treveon Bailey scored early in the third to pull the River Kings' deficit to 10 at 40-30. Bailey, a senior, finished with 13 for Clinton as did junior Jai Jensen.

But then Yahn scored 10 of the Muskies’ next 11 as Muscatine extended the lead to 51-38 with just under five minutes left.

“We did a very good job tonight (with the tempo),” said Windham. “We talk about pushing the ball up the floor and creating some easy scores.”

Yahn then punctuated the quarter with a buzzer-beating 3.

Dieckman had a nice all-around performance, going for 14 points on 5-of-7 shooting and grabbing seven rebounds while recording four blocked shots.

"It's been a long time since we've felt this good," Dieckman said. "Noah couldn't miss tonight. It was crazy. We definitely wanted to get him the ball tonight.

"I think this game shows who we really are and what we've worked for. It shows who we've become. We've come a long way."

Ulses chipped in 14 points and had the Muskie rebound lead with nine. Lee and junior Braden Hufford each ended with 11 and junior Waker Cler rounded out the Muskie scoring with 10.

Clinton (1-19) junior Isiah Struve had a team high for the River Kings, finishing with 20 points.

Struve tried to keep pace with the Muskies in the third, often exchanging baskets with Yahn on opposite ends. Struve ended the third with 11, but by then Muscatine had built a 70 to 52 lead.

The tournament game comes a month after the sides played their first matchup, the Muskies took that one, 62-39. Muscatine were led to victory against the River Kings on Jan. 21 by a trio of players who scored in double figures in Josh Dieckman (14 points), Noah Yahn (13) and Waker Cler (12).

“It’s always been a process,” said Yahn. “This has always been a goal. Of course, we’re not done, but this is the result of a lot of hours spent in the gym together.”

“It’s been a long trek for this team,” Windham said. “Three years ago we had no wins, now we have 10 … this is an accomplishment. It’s something we haven’t seen here since Joe left.”

DAVENPORT — Muscatine came within a few outs of sweeping a Mississippi Athletic Conference doubleheader from Davenport North on Thursday.

Muscatine's Josh Dieckman slams the ball through the hoop against two Clinton players during Monday night's Class 4A substate game.

Waker Cler of Muscatine loops a pass over Clinton's Logan Mulholland (14) during the first half Monday night.