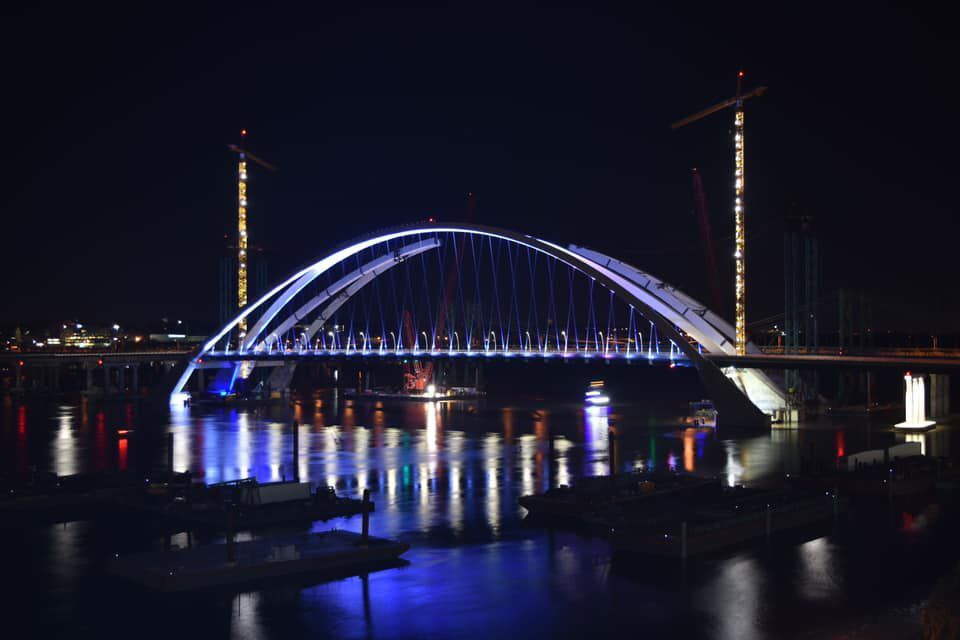 Lighting is being added to the new Illinois-bound span of the Interstate 74 bridge, which will match the lights on the westbound crossing. The lights have been tested but will not be used until both spans are completed. 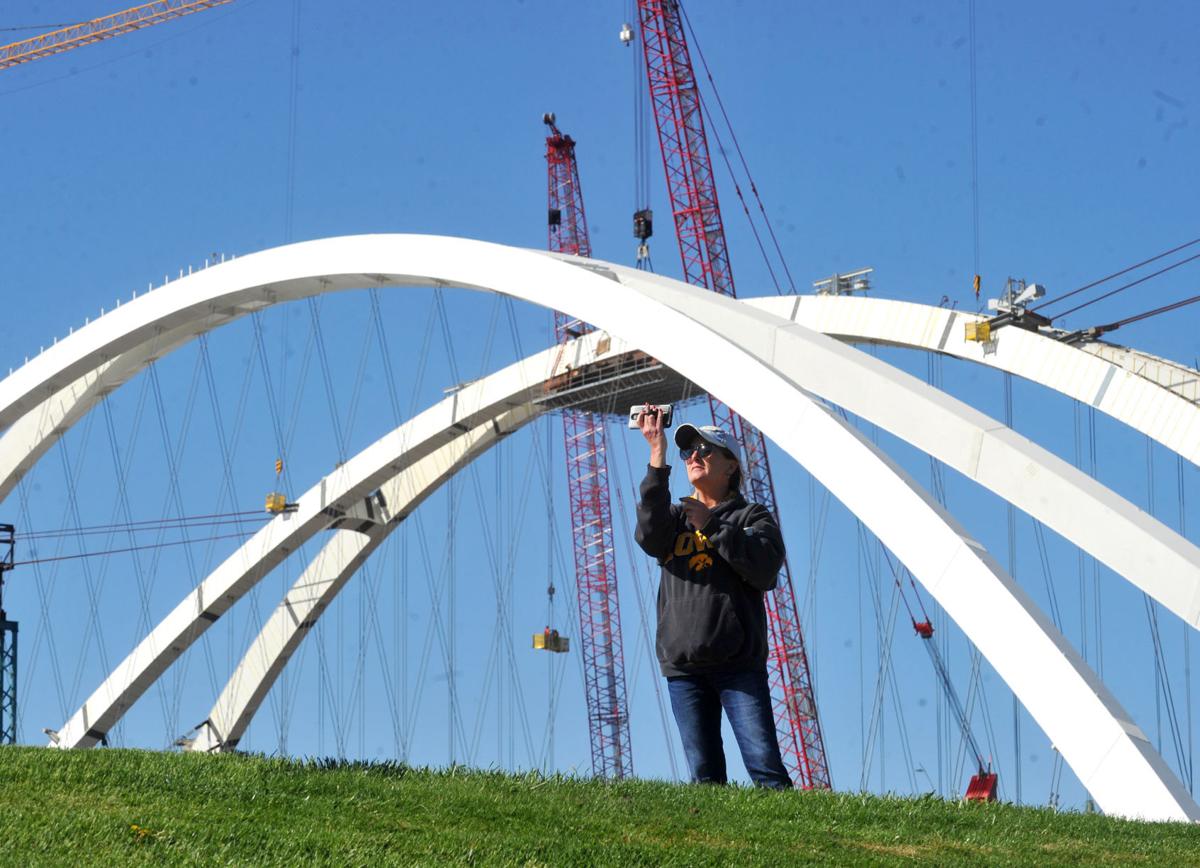 Final girders are being set on the new eastbound (Illinois-bound) span near the riverfront in Bettendorf this week, and concrete barriers are being poured on the new roadway in Moline. Lane striping is not far behind.

Meanwhile, the sections of driving deck that fit between the arch are to be placed later this month.

And, despite a snag related to cost, the bike and pedestrian path on the downstream side of the Illinois-bound bridge is to open as scheduled.

Bridge planners realized last year that some components that go into the elevator cars on Bettendorf's $2.2 million let-down structure from the bridge/bike path do not comply with the project's Buy America agreement.

Replacing some of the Canadian-made components with custom-made American parts would roughly double the cost. If a waiver from the agreement is not approved, Bettendorf is likely to wait out the completion of the project and expiration of the agreement and add the elevator later.

"The bike path floor modules adjacent to the arch will be placed after the arch floor modules," said George Ryan, I-74 corridor manager, Wood Environment and Infrastructure Solutions, Inc. "The roadway and bike path are both scheduled to be completed by the end of this year."

The bike path will be 14 feet wide and will be separate from traffic. Fully ADA accessible, the path will have a scenic overlook with a see-through feature in the floor.

Lighting already is in place on the westbound span and now is being added to the new Illinois-bound bridge.

The primary contractor on the bridge, Lunda Construction, has been in arbitration with both the concrete supplier and the steel supplier for Interstate 74. Lunda was sued by Hahn Ready Mix Co. and Industrial Steel Construction, or ISC.

Court records show that Lunda and Hahn were ordered into arbitration and recently reached a partial resolution.

In the ISC lawsuit, Lunda was accused of breach of contract, and the steel maker was claiming more than $12.5 million was owed.

Filed in federal court, records show Lunda filed a counter suit and was awarded more than $240,000 last month as a result of arbitration.

The tallest cliff in the Solar System is one steep drop

The tallest cliff in the Solar System is one steep drop

WH turns focus to getting under 30 vaccinated

WH turns focus to getting under 30 vaccinated

Psaki: The fight for voting rights 'is not over'

Psaki: The fight for voting rights 'is not over'

"He never waited to live his life": Son of man killed in Stockton manure digester remembers his father's life

Bob Baenziger, 54, died in a farm accident on June 9 in Stockton, Iowa. He was diving to repair a broken cable at the bottom of an anaerobic digester, where cattle manure and food waste generate biogas.

A Muscatine man charged with shooting a Moline teenager to death entered a plea of not guilty Tuesday. He also waived his preliminary hearing …

As I am writing this column Sunday afternoon, I am feeling just a little relieved by the fact that some rain is falling. It’s not a lot of rai…

Quad-Cities animal shelters are bursting with cats and dogs, and shelter workers are pleading with the public to volunteer as foster families until the animals can be adopted.

Bettendorf Police have arrested a Wilton, Iowa, man after he was found in possession of methamphetamine during a traffic stop Friday, accordin…

Jumer's Casino and Hotel in Rock Island has been sold to Bally's Corporation for $120 million.

Grace Lynn Keller, 22, of Island Lake, Illinois, was crowned Miss Iowa 2021 Saturday night to wrap up the competition held this weekend at the…

Lighting is being added to the new Illinois-bound span of the Interstate 74 bridge, which will match the lights on the westbound crossing. The lights have been tested but will not be used until both spans are completed.