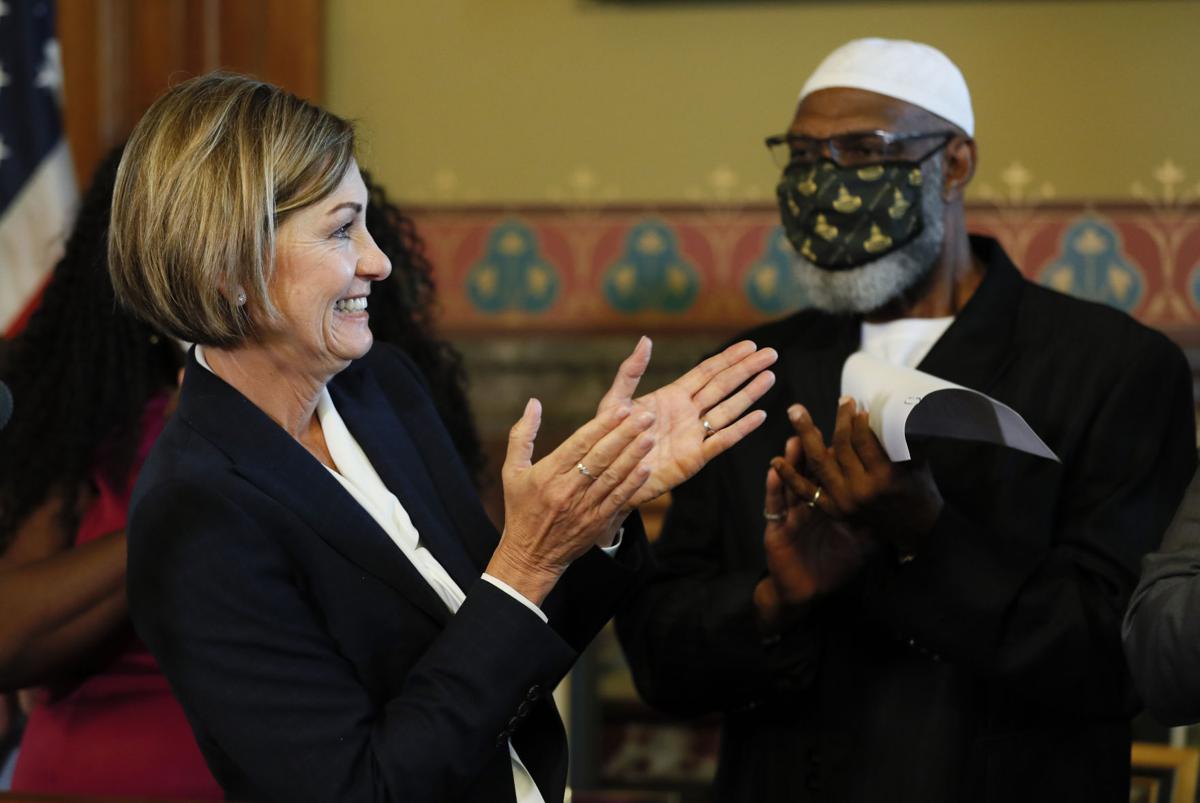 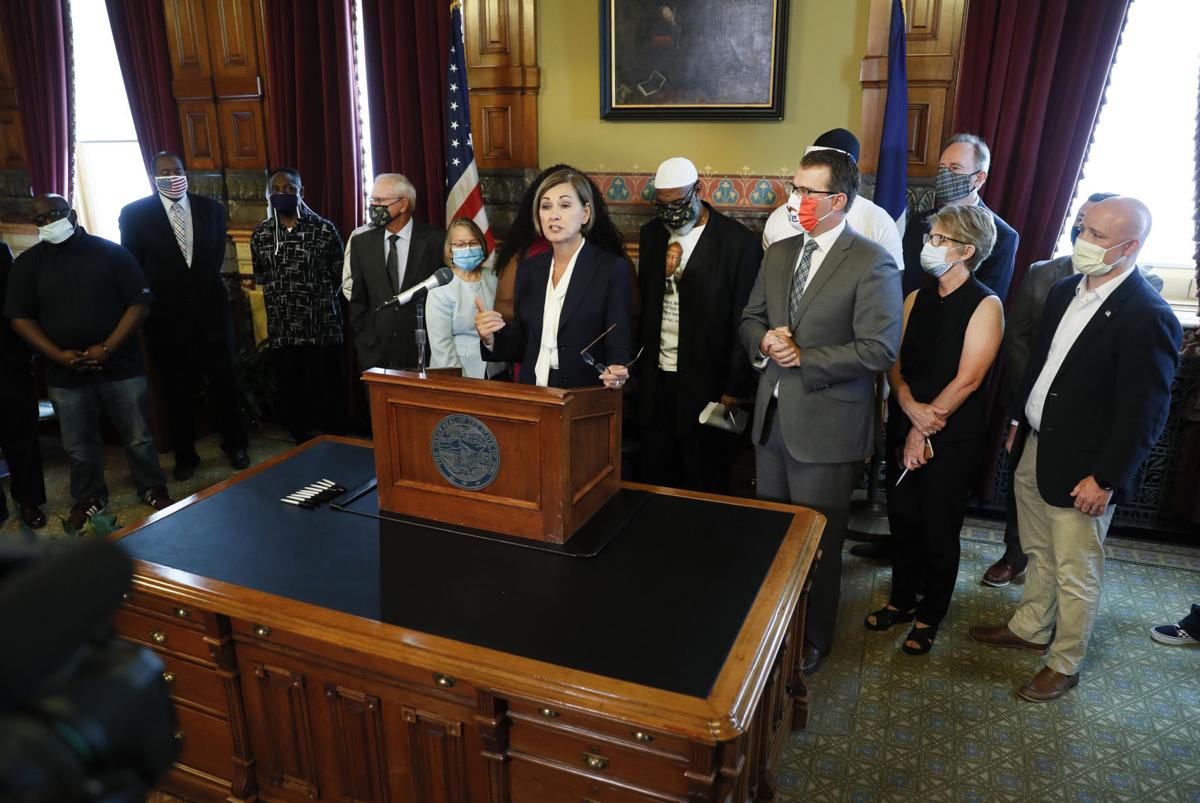 Iowa Gov. Kim Reynolds speaks after signing an executive order granting convicted felons the right to vote during a signing ceremony Wednesday at the Statehouse in Des Moines. 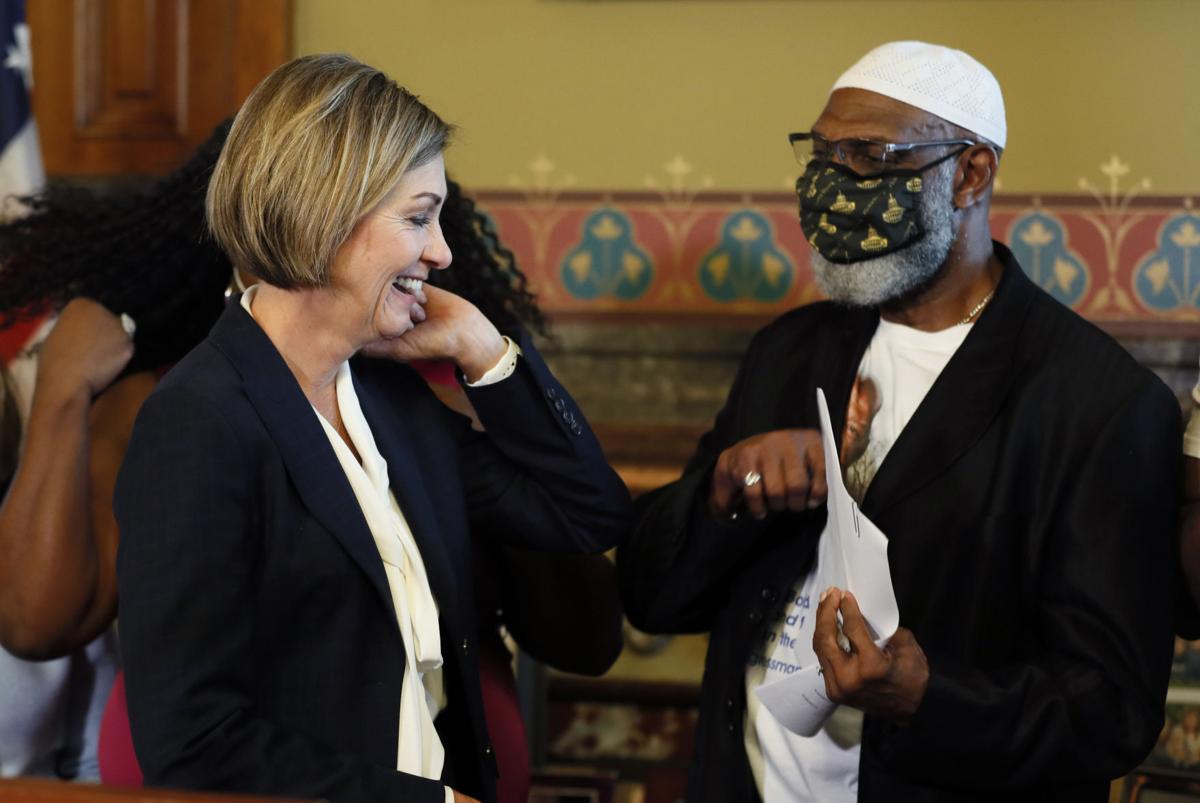 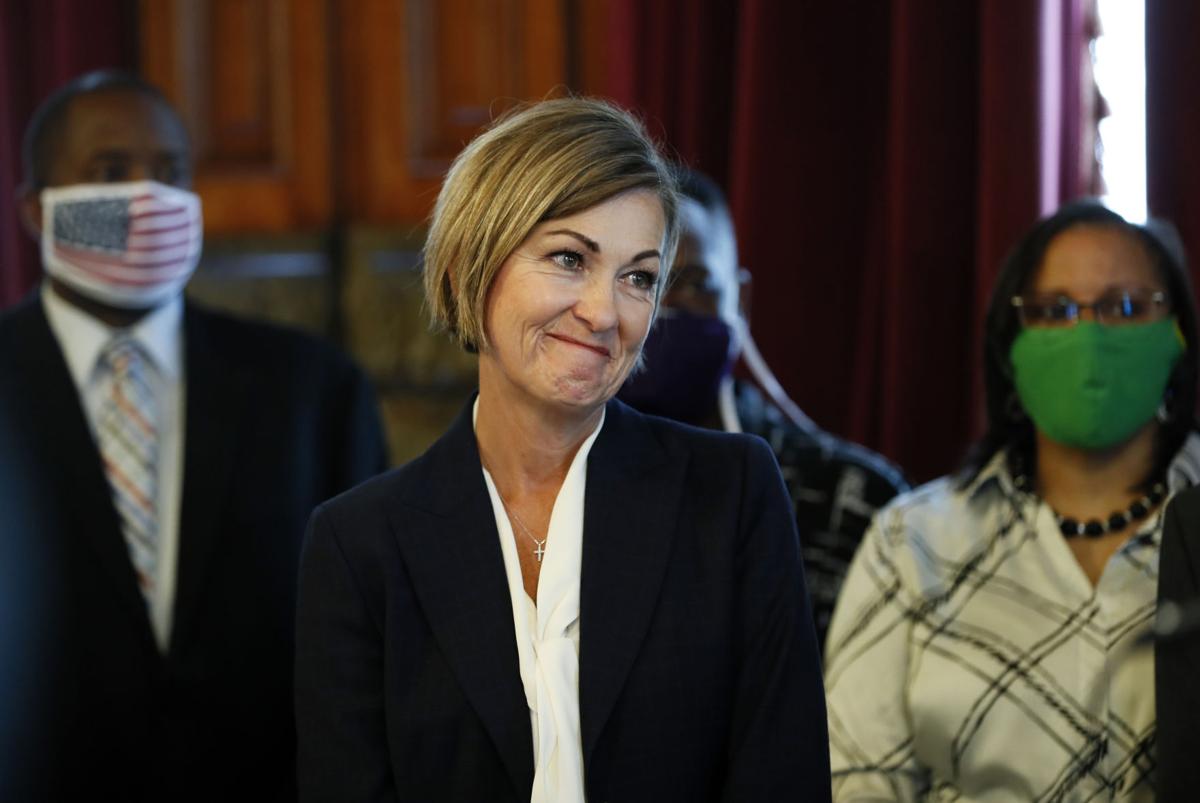 Iowa Gov. Kim Reynolds looks on after signing an executive order granting convicted felons the right to vote during a signing ceremony, Wednesday at the Statehouse in Des Moines.

DES MOINES — Thousands of qualifying felons in Iowa will be eligible to vote this November thanks to an executive order Gov. Kim Reynolds signed Wednesday that automatically restores their voting rights once they have discharged their sentence or been granted probation or parole.

Making good on a promise, Reynolds signed the order during a Statehouse ceremony that drew state legislators, Black Lives Matter activists and a coalition of groups that have worked since 2011 to restore felons’ right to vote and run for public office.

“I just have to say, yee haw, we did this,” said Betty Andrews, leader of the Iowa-Nebraska NAACP, who witnessed the signing in Reynolds’ Capitol formal office. “We understand that there is a lot more to do, but certainly this is a strong step in the right direction. We are looking for more. We will continue to persist.”

Reynolds, an Osceola Republican, signed the order to restore the right to vote to felons who have completed their sentences or have been paroled or placed on probation, and to set up a process where she will daily restore voting rights of eligible felons going forward.

“It boils down to our fundamental belief in redemption and second chances,” she said. “Quite simply, when someone serves their sentence and has paid the price our justice system has set for their crime, they should have their right to vote restored automatically, plain and simple.”

The order does not apply to felons who were convicted under Iowa’s Chapter 707 homicide criminal code section — which includes murder, manslaughter and voluntary manslaughter — nor does it extend voting rights to felons with special lifetime sentences for sexual crimes or other offenses.

Those cases would have to go through the Iowa Board of Parole or separate applications to be considered.

Restoration of voting rights is not contingent on any financial payment, victim restitution or fines, according to the governor’s office. But the executive order does not grant clemency or waive any court-ordered financial obligations, either.

“It’s a big step for so many on the road to redemption and proving to themselves and maybe to others that their crimes or their convictions do not define them,” Reynolds said. “Today we are taking a step to at least temporarily fix that injustice that our current system creates. But let me be clear, an executive order is at best a temporary solution.”

Reynolds initially had resisted issuing an executive order, preferring instead that the Iowa Legislature begin the process of amending the Iowa Constitution to include automatic felon voting rights restoration upon discharge of a criminal sentence or release on probation or parole as a permanent solution — not subject to change by a future governor or General Assembly.

As it is now, released felons can individually petition the governor. Reynolds has said no one person should have that power, and called for a state constitutional amendment to guide the process. But lawmakers have disagreed on which felons would be eligible and when, so Reynolds said she would sign her own directive.

Lawmakers who support a state constitutional amendment say they intend to bring up the issue again.

“It is imperative that we get it done,” said Rep. Ako Abdul-Samad, a Des Moines Democrat active in brokering bipartisan solutions for social justice and Black Lives Matter movement issues such as Wednesday’s achievement.

Wearing a T-shirt bearing the image of the late civil right activist and U.S. Rep. John Lewis, Abdul-Samad thanked the governor for “taking a stand and standing up to a promise” in taking the executive action.

Senate Democratic Leader Janet Petersen of Des Moines criticized Senate Republicans for “dropping the ball” last session by not approving a constitutional amendment resolution that had passed the Iowa House 95-2 in 2019.

“With the General Election less than 100 days away and in the absence of leadership by Senate Republicans, an executive order was the best way to give a second chance to many Iowans who lost their voting rights when they went to prison,” Petersen said in a statement. “However, this is a temporary solution.”

Currently, Iowa is the only state in the nation to ban all people with felony convictions from voting unless they apply individually to the governor’s office to have their rights restored.

Fifteen years ago, Democratic Gov. Tom Vilsack issued an executive order allowing felons to vote after being released. About 115,000 felons regained voting rights as a result. However, Gov. Terry Branstad, a Republican, rescinded the order in 2011 and replaced it with an appeal process.

Earlier this year, the GOP-run Legislature approved and the governor signed Senate File 2348 — a bill that is not in effect yet, which granted felon voting rights but stated that those convicted of murder, child endangerment resulting in the death of a minor, serious sex offenses or named on the sex offender registry, or first-degree election misconduct would not be eligible to have their voting rights restored. That bill would be effective only if a constitutional amendment on felon voting rights is ratified by 2023 by voters.

The governor’s order will allow thousands more Iowans the chance to participate in the November elections. Andrews estimated the number at about 40,000.

“We’re relieved that the governor’s order does not make eligibility to vote dependent on how much money a person has, that is, it’s not contingent on paying off fees and fines or other associated debts,” said Mark Stringer, ACLU of Iowa executive director. “We are disappointed that those who have served the terms of their sentences for various forms of homicide were not included in the order. This category includes involuntary manslaughter, among others. We will continue to work to ensure that all Iowans who have completed their sentences can once again participate in the democracy that so profoundly affects them.”

Iowa Gov. Kim Reynolds speaks after signing an executive order granting convicted felons the right to vote during a signing ceremony Wednesday at the Statehouse in Des Moines.

Iowa Gov. Kim Reynolds looks on after signing an executive order granting convicted felons the right to vote during a signing ceremony, Wednesday at the Statehouse in Des Moines.