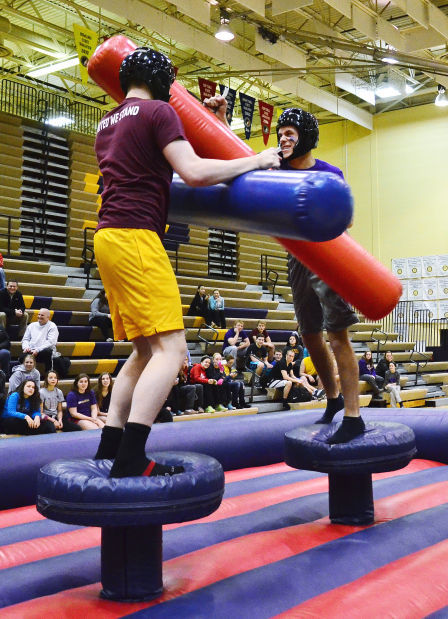 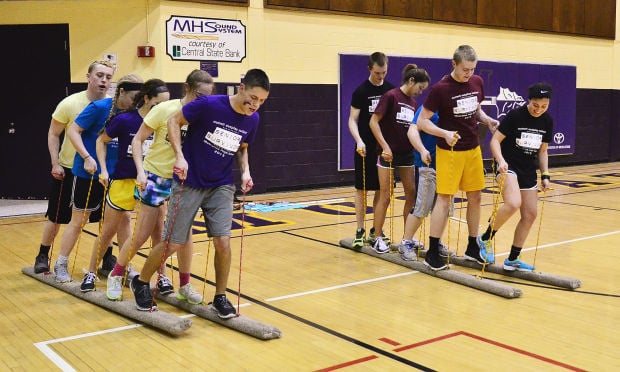 Ten of the 12 Muscatine Seniors participating in Senior Survivor try to coordinate their steps during one of the challenges of the obstacle course Wednesday evening.

Paired up into six teams, the students have been duking it out in the high school for the past five nights, completing physical and mental challenges as they compete to win money for charity. All this after racing against still more teams to raise enough money in the weeks leading up to the five-day, five-night event in order to participate in this week's challenges for the chance to win even more money for their causes. Though money the students raised during that time is already designated to their charities, the pot raised by the challenges held before the community each evening of this week is still at stake.

He and his partner, Katelyn Wagner, chose the Muscatine United Way as their charity.

"There's a lot of the hard things like not sleeping, not getting good food," Wagner listed in agreement, referring to the Tailored Operational Training Meals (TOTM) they're fed during the week, "and our legs, we can't feel them. But there [are] times when we're laughing and stuff. We have really good moments. We have all had fun together. It's a really good experience."

Taustin Kaste, who is partnered with his twin sister, Miranda, in competing for St. Jude Children's Hospital, concurred with Finn.

At the beginning of Thursday night's event, the competition became an actual fight: The students faced off on an inflatable jousting ring where they had to push each other off pedestals using large, round poles, which were almost as long as most of them were tall. Of the boys, Finn claimed victory and Miranda won among the girls. Then each team chose an audience member to joust for them, gaining Katie Spellman and Matt Sovers, who were competing for the Iowa Children's Miracle Network, a win as well.

But it's not all about competing.

"Sometimes we have big group challenges where all the teams compete [together]," Miranda explained, "and I feel like we help each other really well. ... All of us get along really well, even though we're all competitive."

The teams showcased their ability to work well together during the second challenge of the evening on Thursday, when they were split into groups of five to board walk across the gym and back. Each student placed their feet on carpet-covered boards with strings attached in front of where they positioned their feet for them to use to drag the board along as they and their teammates all stepped forward one foot at a time. If any of their team members stepped off the board, they had to start again. With cries of "Left! Right! Left! Right!" both teams eventually made it.

Then they were presented with another group challenge by having their legs tied together in a line. The person on each end of the six-person line had one foot free, while all the others had both legs tied to people on either side of them, and each line had to step through four hula hoops laying on the ground without dragging the hoops across the floor. After a little trial and error, the groups figured out how to step and shuffle individually, supporting themselves and each other their arms across the shoulders of the people next to them.

All in all, it was a hard night's work, especially since the students had only a few hours sleep the night before, which included what most of the teams reported as the most difficult challenges so far.

"We look like zombies," said Reyna Melendez, who was partnered with Blake Eller.

The pair had chosen University of Iowa Dance Marathon as their charity, due to Melendez's personal tie to it. Several years ago, her younger sister was diagnosed with leukemia. This year marks her family's ninth year of involvement with the dance marathon.

Teams Connor Lawhead and Emilee Meyer and Jaren Winkey and Stephanie Garrido also chose their charities because of personal ties. For Lawhead and Meyer, it was the Erika Kate Foundation because Erika Kate was Meyer's neighbor growing up.

For Winkey and Garrido, it was the Breast Cancer Research Fund, because of their family histories of breast cancer.

"It looked so impossible," Garrido explained about choosing to be a part of Senior Survivor, "but I kinda just wanted to push myself a little bit so I was like, 'Well who can I do it with?' and who better to do it with than your best friend on your senior year?"

The fundraiser had raised at least $11,000 by Thursday night, said organizer Elena Bobay, adding that the full total for this year wasn't yet known. Thursday night alone had brought in $2,698. Over the six years that Senior Survivor has been held, the event has raised about $129,000 for charity and it's all, according to Bobay, thanks to the community for supporting the students.

"It's a humbling experience for sure," Sovers said.

Get our local education coverage delivered directly to your inbox.

Education and general news reporter, as well as film critic

A federal lawsuit involving a Davenport boy was at the center of the school board's debate over whether to mask up.

The commercial bus company, Tri-State Travel, will donate a bus for the team's next away game and throw the team a pizza party.

Student outlooks are changing as more time passes since the Sept. 11 attacks.

Ten of the 12 Muscatine Seniors participating in Senior Survivor try to coordinate their steps during one of the challenges of the obstacle course Wednesday evening.