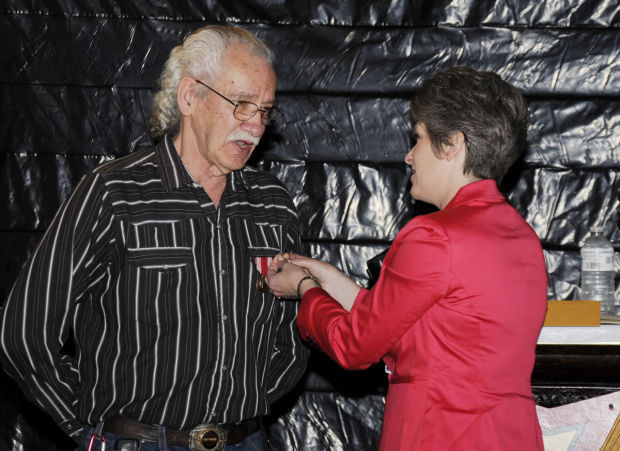 Lyle Kemper, left, receives medals for his service during the Vietnam War from U.S. Senator Joni Ernst , R-Iowa, Tuesday morning at the Veterans of Foreign Wars Post 1565 in Muscatine. 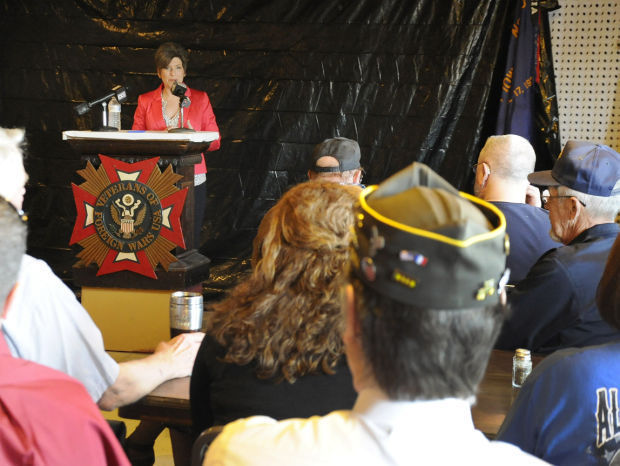 MUSCATINE, Iowa — Veterans affairs — and the long-delayed medals for one local vet — brought U.S. Sen Joni Ernst to the Muscatine chapter of the Veterans of Foreign Wars on Tuesday morning.

In a brief ceremony at the organization's Muscatine headquarters, Ernst, R-Iowa, presented Muscatine resident Lyle Kemper with the Good Conduct Medal and the Expert Rifleman's Badge.

"I'd like to extend my gratitude to you for your services to your country," said Ernest, who served in Kuwait during Operation Iraqi Freedom and is currently a lieutenant colonel in the Iowa National Guard.

Kemper served in the U.S. Army at an Albuquerque, New Mexico, military base from 1961 to 1966 during the Vietnam War. After his service, the longtime Muscatine resident worked for Prime Mover and the Hon Company before retirement.

Kemper noted that he had never received the medals decades after his service ended. Through the Muscatine County Veterans' Affairs office, he was put in contact with Ernst's office, and he said they had managed to resolve the issue in just a couple of weeks.

After the ceremony, Ernst, who is only in the third month of her first term in the U.S. Senate, said she wants to make sure that her office is open for all Iowans and their concerns, noting that she has already met with 800 Iowa residents at her Washington office so far this year.

The senator also reviewed several veterans related and national security issues she has been working on since arriving in Washington. She discussed the first bill that she has introduced into Congress, which would both expand mental health services at VA care facilities and allow veterans access to private care providers to shorten waiting periods for such services.

Ernst noted that the average wait for an initial mental health consultation for veterans in the VA system is 36 days, and that an average of 22 veterans are committing suicide every day.

"If we can prevent that, we need to do it," Ernst said. "Every era [of veterans] struggles with these issues."

Ernst said that she included the private option for mental health care to speed up waiting times, and make such care more accessible to rural veterans who may not have easy access to VA facilities.

The stop in Muscatine was one of three for the day, part of her 99-county tour. She was also slated to visit Kinze Manufacturing in Wililamsburg and Brownells Factory in Grinnell.

The Iowa Department of Public Health (IDPH) has been notified of 19 additional positive cases of Iowans with COVID-19, for a total of 124 posi…

In January of this year, Buffalo Center, Iowa, brought on police officer Dustin Buck to provide law enforcement coverage when the Winnebago Co…

DES MOINES — The Iowa Department of Public Health (IDPH) has been notified of 56 additional positive cases of Iowans with COVID-19, for a tota…

The governors of Illinois and Iowa took to live video streams Sunday, offering updates on the spread of the new coronavirus, COVID-19, in thei…

DES MOINES — Iowa has added another 15 positive cases of novel coronavirus, bringing the total to 105, according to officials with the state D…

DES MOINES — The Iowa Department of Public Health (IDPH) has been notified of 34 additional positive cases of Iowans with COVID-19, for a tota…

MUSCATINE — A person has tested positive for COVID-19 in Muscatine County, the governor announced Thursday at her daily coronavirus briefing.

Lyle Kemper, left, receives medals for his service during the Vietnam War from U.S. Senator Joni Ernst , R-Iowa, Tuesday morning at the Veterans of Foreign Wars Post 1565 in Muscatine.