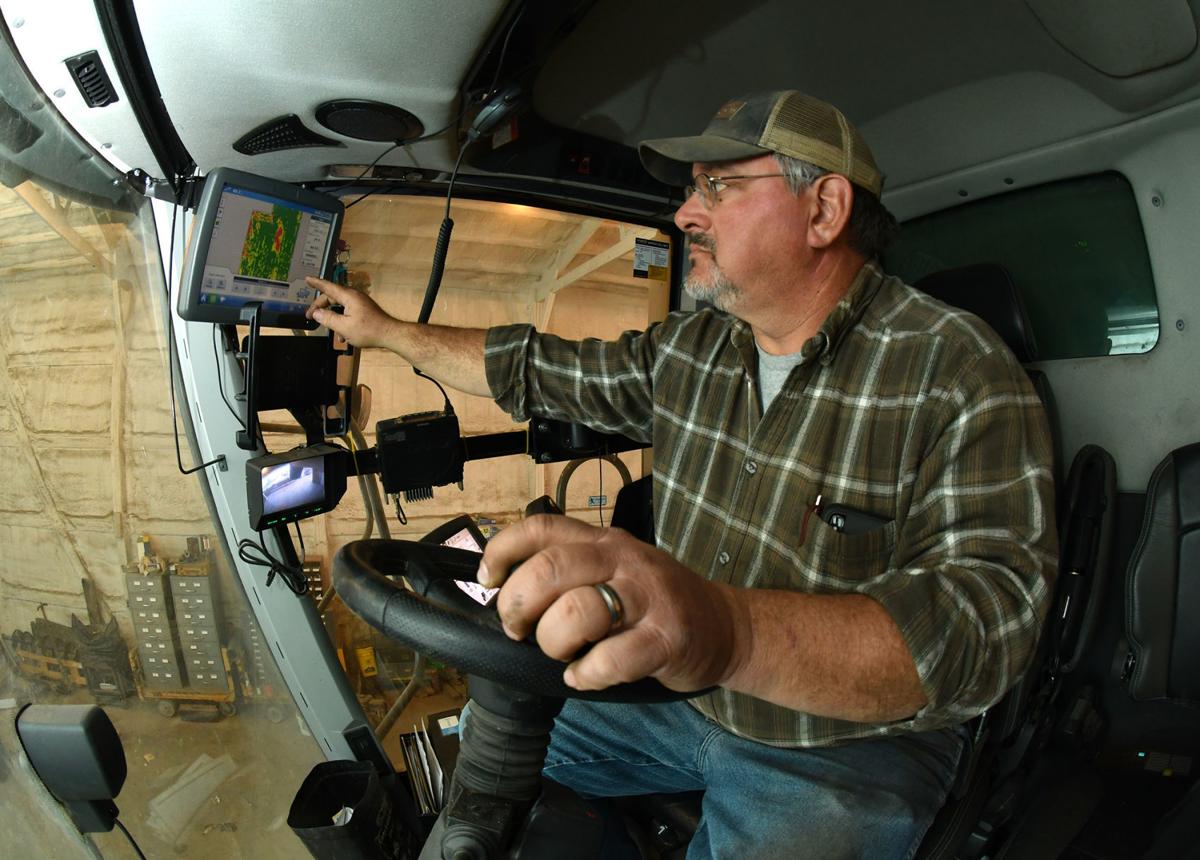 Michael Zecher, president of Mercer County Farm Bureau checks over the various monitors inside the cab of his harvester as he works his farm during harvest, Sunday, Nov. 10, 2019. 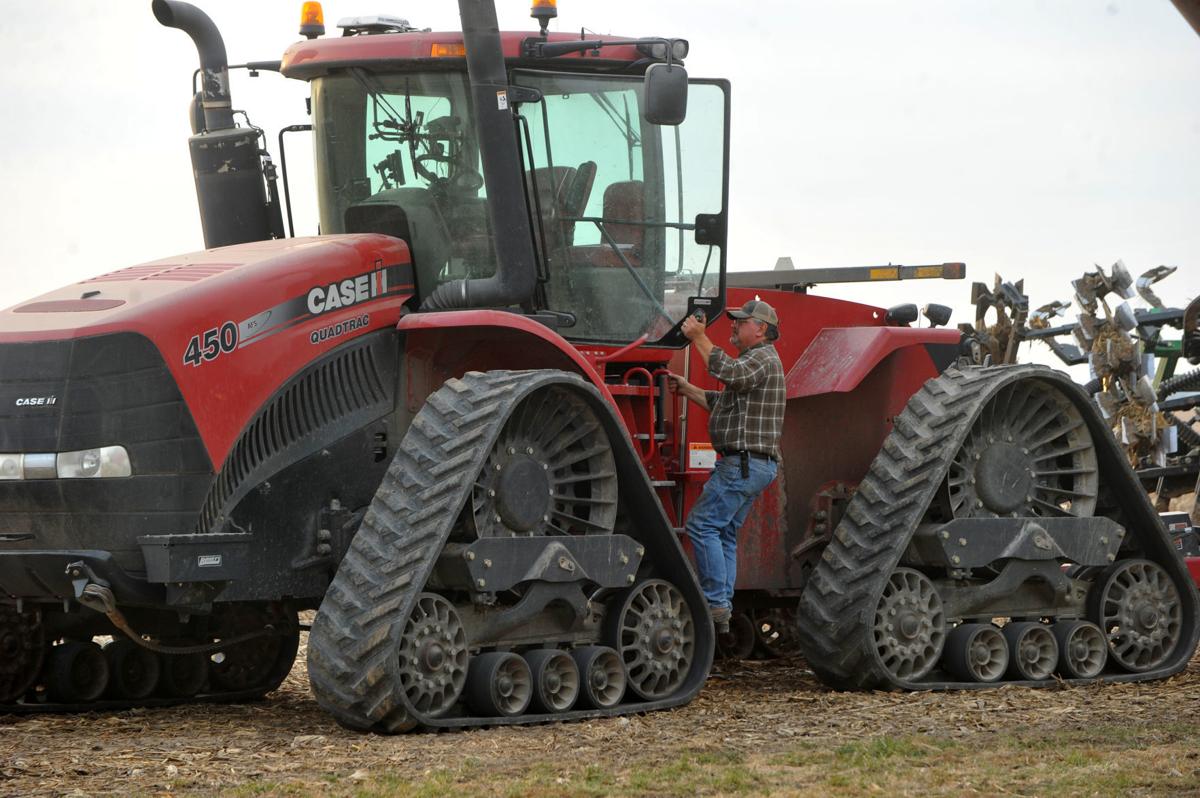 Michael Zecher, president of Mercer County Farm Bureau prepares to start his tractor as he works his farm during harvest, Sunday, Nov. 10, 2019. A shortage of propane is among the issues farmers are facing this fall. They need it to dry out corn crops. 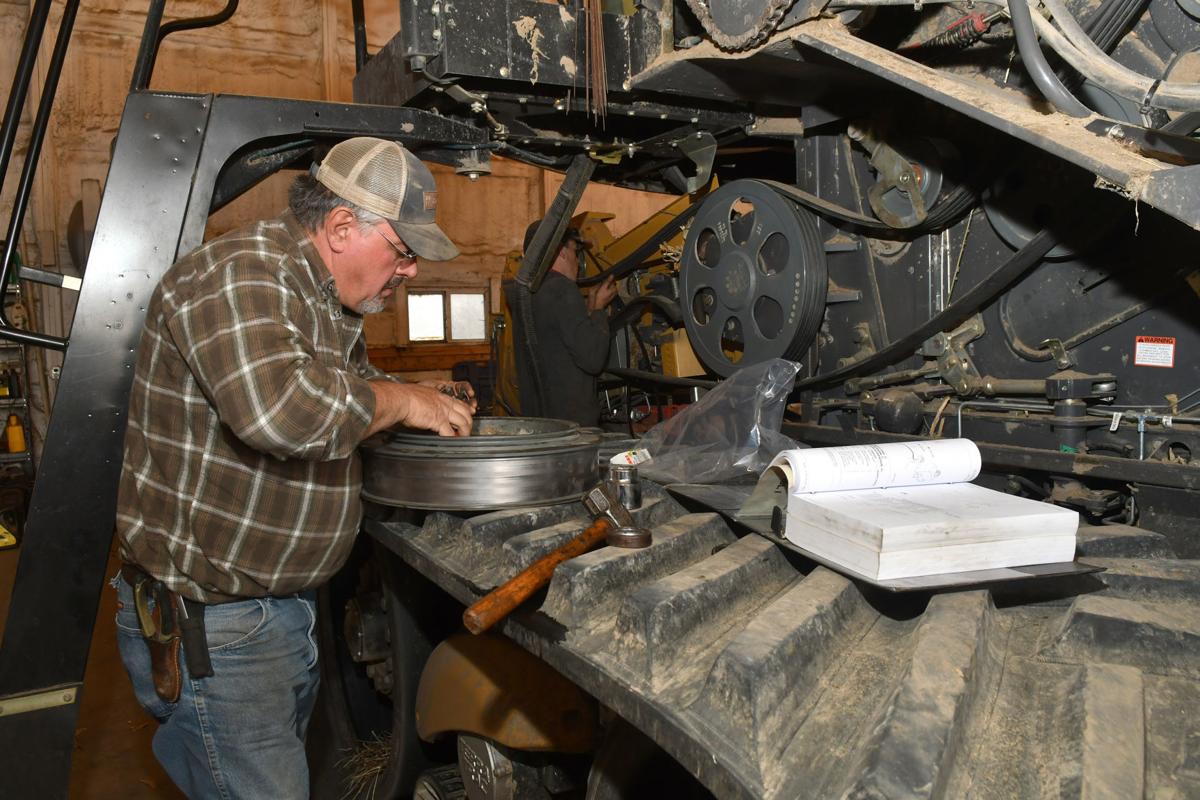 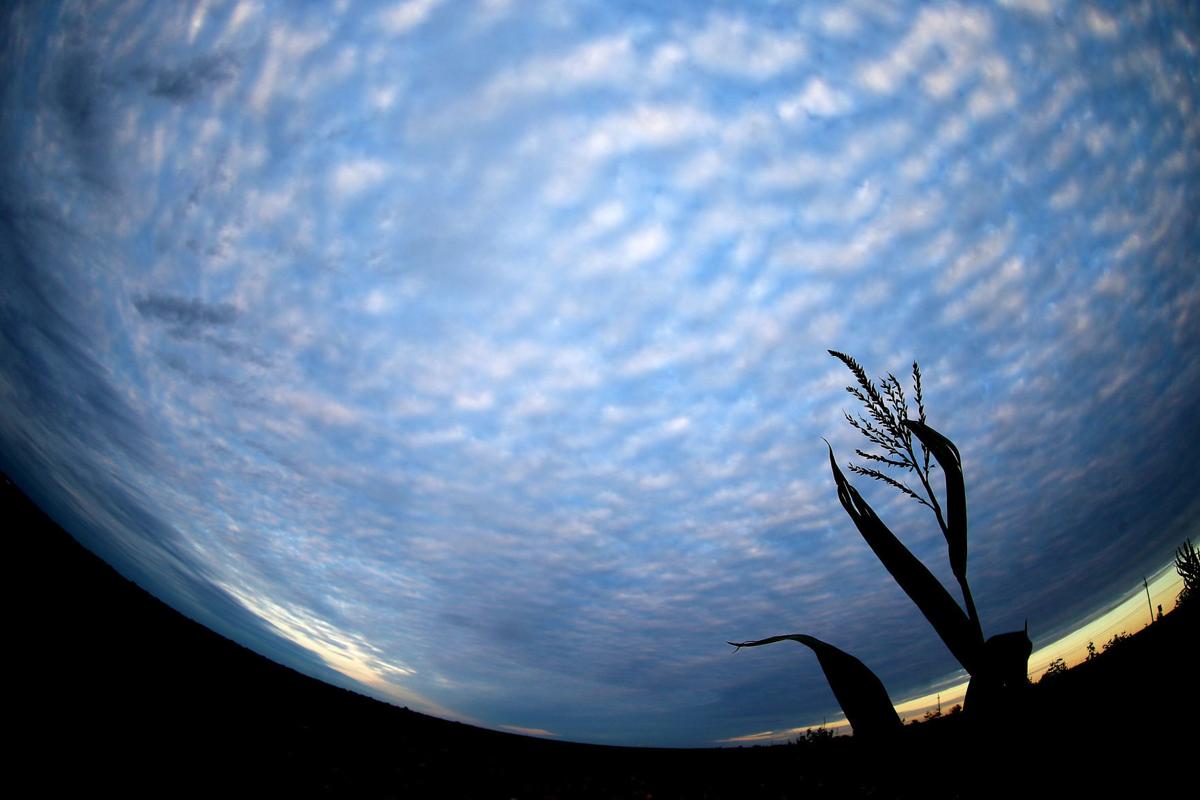 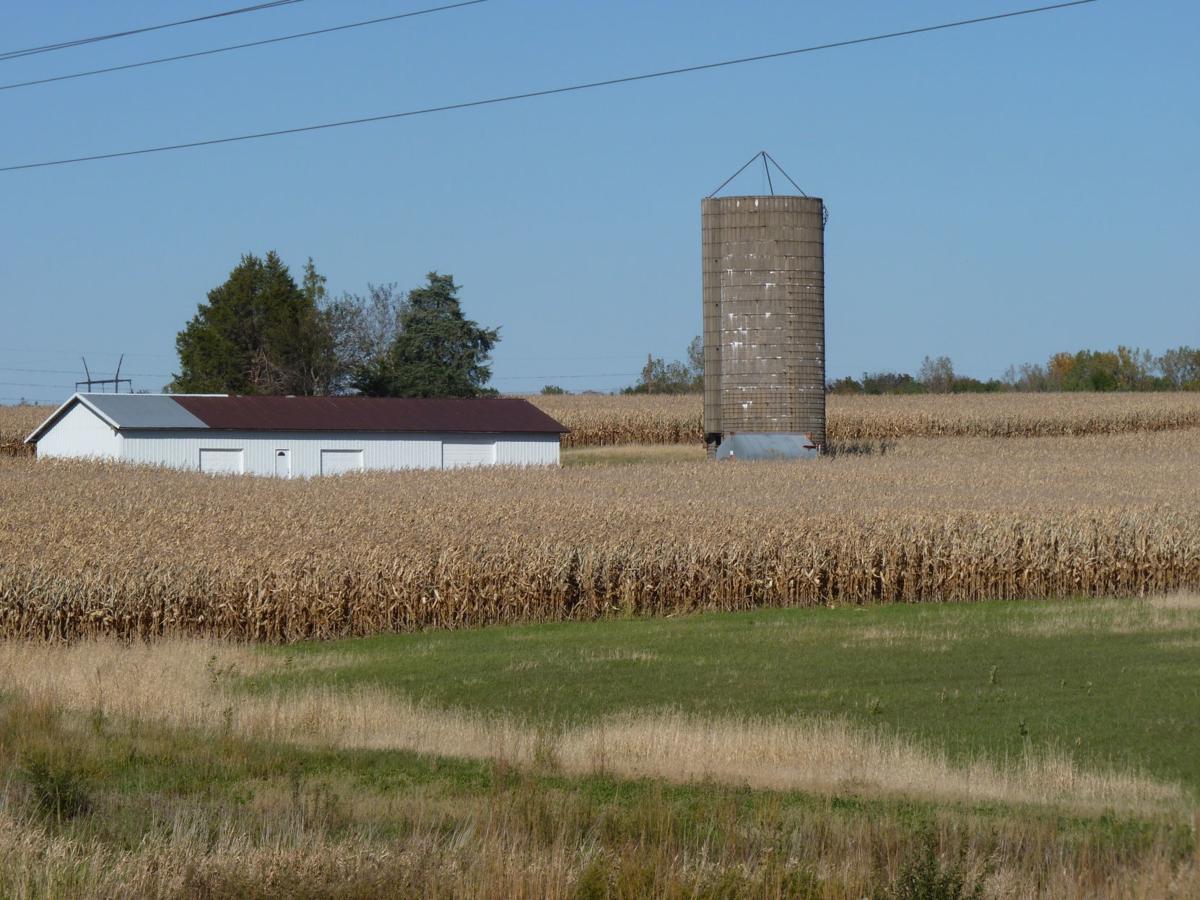 Only a small amount of corn has been harvested so far this year due to the late start of the season. Rains earlier this year kept farmers from planting their crops for almost a month.

Michael Zecher, president of Mercer County Farm Bureau checks over the various monitors inside the cab of his harvester as he works his farm during harvest, Sunday, Nov. 10, 2019.

Michael Zecher, president of Mercer County Farm Bureau prepares to start his tractor as he works his farm during harvest, Sunday, Nov. 10, 2019. A shortage of propane is among the issues farmers are facing this fall. They need it to dry out corn crops.

Only a small amount of corn has been harvested so far this year due to the late start of the season. Rains earlier this year kept farmers from planting their crops for almost a month.

As an international trade war drags on and farmers continue to grapple with roller-coaster weather, harvest season has become a "race against time."

That’s the message from Dennis Verbeck, president of the Henry County Farm Bureau, who farms with his brother in eastern Henry County and western Bureau County.

“It was a planting season from hell,” he said.

“We went from one extreme to the next and then back to the other … in September, we had 10 to 12 inches of rain.”

A rainy spring and flooding delayed planting. Cloudy days and snow in late October and early November have compounded issues with the harvest.

For Verbeck, harvest season began in the last few weeks after the majority of his planting occurred between June 3 and June 17. That’s a month behind normal.

“As the days get shorter and we transition from fall to winter, it’s kind of a race against time. We wish we had that month back.”

Farmers have been keeping an eye on the latest updates from the ongoing trade war that began last year all while having to deal with less than ideal conditions. Issues last year, where some farmers sat on some of their harvested crops to wait out price stabilization, were compounded when spring flooding closed river terminals so farmers couldn’t get their product to buyers.

That led at least one farmer — Michael Zecher, president of the Mercer County Farm Bureau — to take his corn to Galva’s Big River Resources, an ethanol plant.

“The vast majority of the 2018 crop that got stored into the summer went into ethanol plants just because the closest markets were the river terminals that weren’t able to” export, he said. “I had to go where I could to sell my crop.”

Heavy rains that led to flooding in the spring gave way to weeks without any rain in the summer. While things returned to a relative normality later in the summer, September saw even more rain. Recent weeks have featured sunny days book-ended by two snow falls.

Verbeck was able to get all of his soybeans harvested by late last week, but he said he and his brother likely have 100 acres of corn in their fields.

Those clear days, about a 10-day stretch, helped speed up the soybean harvest for area farmers. But regardless of clear, sunny days, the natural drying process for crops has been slowed due to early cold temperatures last month.

Grant Strom, president of the Knox County Farm Bureau, whose family farm is in Williamsfield, said there has been “a lot of high moisture corn that will have to be harvested.”

“It’s extra time and money because you got to dry corn to market moisture,” he said last month. “Yields are highly variable, but for sure they’re going to be the poorest yields we’ve had in six years or so.”

“As an Ameren Illinois customer, if you dry when the temperature is 25 degrees or less, it’s a surcharge,” Strom said. “There’s a tremendous amount of corn to be dried and pretty much everybody is on an allotment of propane.”

Strom said for three months farmers have said they would need propane. “I hope there’s not some gouging that’s going to take place on this. Farmers are in high need of propane and natural gas. It’s disappointing that the infrastructure didn’t prepare itself better.”

For harvest, Strom said it will slow things down if farmers can't dry their corn with gas.

"Without a doubt, there will be corn still left in the field by December," he said.

Verbeck estimated the cost of using propane to dry corn has increased by 50%.

"There could be corn standing in the field on the first of the year with the way that's going," he said.

Zecher, who farms in Mercer and Rock Island counties, is hopeful to finish the harvest season by the end of this month.

“That’s not too far off of normal. Much of the time, we normally finish up Thanksgiving weekend so we will be real close to that, barring any more big snow events,” he said late last week.

Dennis VanDaele, who farms in Reynolds across three properties, said the moisture of his current crop is comparable to 2009.

Some in the farming community have begun to compare 2019 to 2009, when some farmers were still in the fields in January 2010. But Verbeck said 1992, which was worse than 2009, might be a better comparison.

DeAnne Bloomberg, director of Issue Management with the Illinois Farm Bureau, said added moisture, whether it is snow or rain, leads to more drying time and messier fields for farmers to navigate.

“Farmers once again will adapt to the situation and manage it the best way possible,” she said, echoing the sentiment of farmers always being optimistic.

“I think what’s so hard for some people to understand is the amount of variables that have been thrown at farms this year and they’re in a world today where we want to try to control the outcome. If anything, you got to remember that’s why you will find farmers that will be very reliant on their faith.

“And if they’re going to manage risk, what’s different from today as opposed to the '80s is we have a number of risk management tools in their toolboxes.”

While some farmers interviewed were encouraged by the United States-Japan trade deal in recent weeks, the focus is still on China and the inaction of the U.S. Congress on the U.S.-Mexico-Canada Agreement, or the trade deal commonly referred to as USMCA. There is also dispute over the renewable fuel standards and whether the EPA will fulfill President Trump's agreement that called for blending 15 billion gallons of ethanol and biodiesel into other motor fuel.

“Farmers see what’s in front of them and they move through it. Is it disheartening? Frustrating? Challenging? You bet,” Bloomberg said. “That’s why I would say more than anything farmers want to see resolve in these trade arguments and a positive outcome on the supplemental rule on the Renewed Fuel Standard waivers."

For Strom in Williamsfield, he has been encouraged with some of the talks around a potential China deal but remains skeptical until something is signed.

“Until something is actually signed, it’s just hard to be too optimistic. On the trade front, the most disappointing thing for most farmers is that the USMCA has not been ratified by the U.S.,” he said last month.

“Until something is signed and enforced, I don’t think the market can trust or believe much of anything until we see it happen,” he said Monday.

“It’s encouraging that it appears both sides have verbally come to some agreements that hopefully get signed. I will say, back in March it sounded like we were close to signing something and it blew up.

“At this point, we are hopeful, but not going to hold our breath.”

Meanwhile, the U.S.-Mexico-Canada trade agreement is still stalled in Washington.

“Washington doesn’t seem to care much about anything besides impeachment right now. I just wish both sides could come together to sign some good, bipartisanship legislation … once the calendar turns 2020, there’s just not going to be any talk of any meaningful legislation with the election.”

Verbeck, in Henry County, said Congress is playing “political football” with the USMCA trade deal. He also liked the deal with Japan but said it was worse than the Trans-Pacific Partnership, which President Donald Trump withdrew the US from earlier in his tenure.

“Trump pulled us out of TPP and wanted to go at it alone and so the deal we reached with Japan was worse than TPP,” Verbeck said. “We got a deal, but it’s not as lucrative for agriculture if we would have stayed in TPP.”

VanDaele summarized the trade war by saying, “You know how wars go? Nobody wins.”

Give Me Five: Travails of farmers discussed by Bloomberg

Feds: Truck drivers can stay on the road longer to supply propane

Federal action has been taken to allow commercial truck drivers to drive longer periods of time to address propane needs for area users and farmers seeking to dry their crop.

Quad-Cities area farmers, Midwest economists and representatives of businesses in the agriculture sector seemed to be encouraged by Tuesday mo…

The ag community gathered inside of the QCCA Expo Center Sunday as the first day of the annual farm equipment show kicked off on a frigid winter day.

Take a trip down memory lane in the The Muscatine Journal archives!

Get the latest Crime & Courts news in your inbox