Moline Interim City Administrator Marty Vanags has been placed on one week of unpaid leave following complaints he created a hostile work environment by making inappropriate comments of a sexual nature in the workplace.

"The Sikich Report was shared with GovTemps. Both the city and GovTemps agree with Sikich that the reported statements are not acceptable in the workplace," the statement reads in part.

Vanags will undergo sensitivity training next week, Nov. 1-7, and be absent at no cost to the city. Finance Director Carol Barnes will serve as acting city administrator in his place, and Vanags will return to his duties Nov. 8.

"The comments made by Martin Vanags in the workplace are both inappropriate and non-representative of the expectations and values of GovTemps and its employees," Earl said. "We have extended our apologies to the city and do so as well to members of the city’s workforce.

"Mr. Vanags understands his comments were unprofessional and he regrets his behavior. GovTemps looks forward to working with Mr. Vanags next week to begin a training program as well as on-going coaching designed to heighten awareness of appropriate workplace behavior."

Vanags was hired by the city in May on the recommendation of GovTemps' recruiter Mark Peterson at a base salary of $105 an hour, or $218,400 annually. Because Vanags is on a one-year contract with GovTemps, he was not subject to approval by city council members.

Acri said she and city council members received a formal complaint from a city employee on Oct. 1.

"Once we received those allegations, the council elected to hire an organization to do an investigation," Acri said. "We take any type of allegation very seriously. I think I can speak for the council; we are disappointed and we expect better. We have taken action to address the situation."

According to a redacted copy of the 79-page Sikich report, a male employee who reports to Vanags filed a complaint with Human Resources Manager Alison Fleming and city attorneys Derke Price and Margaret Kostopulos accusing Vanags of several incidents of inappropriate behavior.

One of the incidents happened during a car ride with Vanags and two employees in June, during which Vanags shared a story about a sexual encounter in a hotel room.

According to the report, Vanags "violated the discipline policy by conducting himself in an unprofessional manner in the workplace and at work events; and publicly making derogatory, unprofessional, inappropriate and, or divisive comments about members of the senior management team and inappropriate conversations with employees."

The report states, "in accordance with city policy on reporting sexual harassment, (the employee) was filing a report of several incidents that he recently witnessed regarding his supervisor, Martin Vanags, Interim City Administrator. Along with his email, provided six attachments (Exhibits B thru G) outlining specific events to support his allegations.

"He also stated he was fearful of retaliation from filing the complaint as he stated he had already been a victim of documented retaliation and retribution by Vanags since (Vanags) has been working for the council."

Among the exhibits is a report of Vanags stating Aug. 19 that "the city council is a bunch of buyers, and buyers are liars, and the city council members are guilty of talking out of both sides of their mouths." Vanags denied this statement to investigators.

Vanags told investigators, "I don’t know why I said that. I have no explanation, it was wrong."

Prior to a staff meeting Sept. 23, the report states the complainant asked Vanags how he wanted his coffee, to which Vanags replied, "black." After the complainant left the room to get the coffee, Vanags turned to another employee and said, "I wanted to say I like my coffee like I like my women; hot and black, but I’m not suppose to talk like that anymore."

The employee told investigators that Vanags cancelled a request for time off by the employee this summer when he confronted Vanags before about his behavior. The employee consulted with his attorney on several occasions prior to filing the complaint with human resources.

"I know when I called him out on the bullying and intimidation when he cancelled my vacation leave and demanded I return to work back in July it was received as retaliation, retribution, and discipline, so I know he will retaliate from reporting this violation," the employee told investigators.

Vanags on Friday took responsibility for his behavior.

"I made some uncharacteristic, inappropriate comments and I regret that," Vanags said. "I apologized to the residents of the city of Moline, the mayor and the city council. My intent is to learn from this experience." 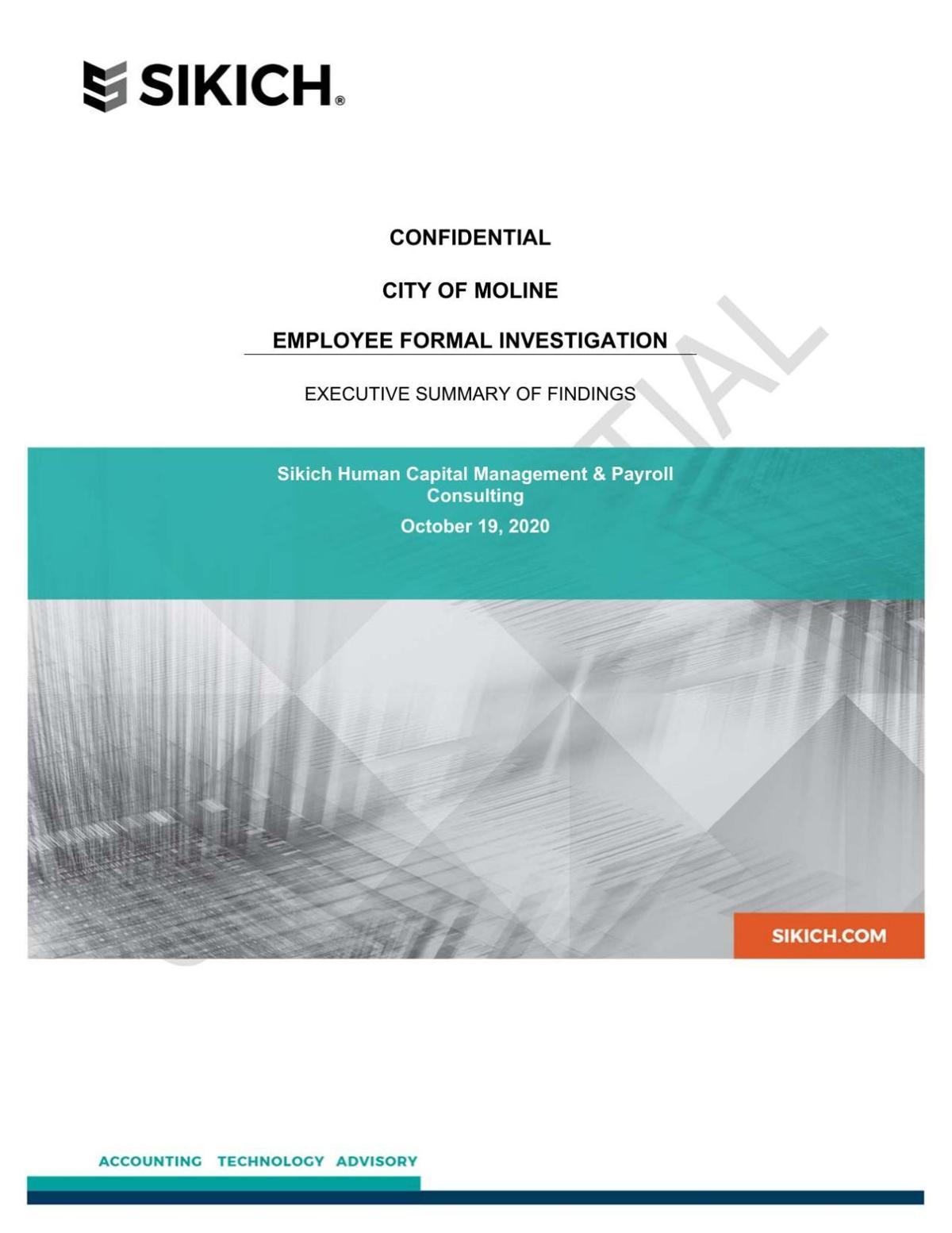 Moline resignations cause for concern

When the city of Moline has two administrators and multiple department heads resign in a short time, it is natural for the community to be con…

After working for more than 18 years for the city of Moline, engineer Scott Hinton has resigned. His last day will be Friday, Jan. 3.

MOLINE — Former City Administrator Lisa Kotter was forced to resign on Sunday, contrary to statements by city officials that she willingly qui…

After less than five months with the city, Moline City Administrator Lisa Kotter is out of a job, effective immediately.