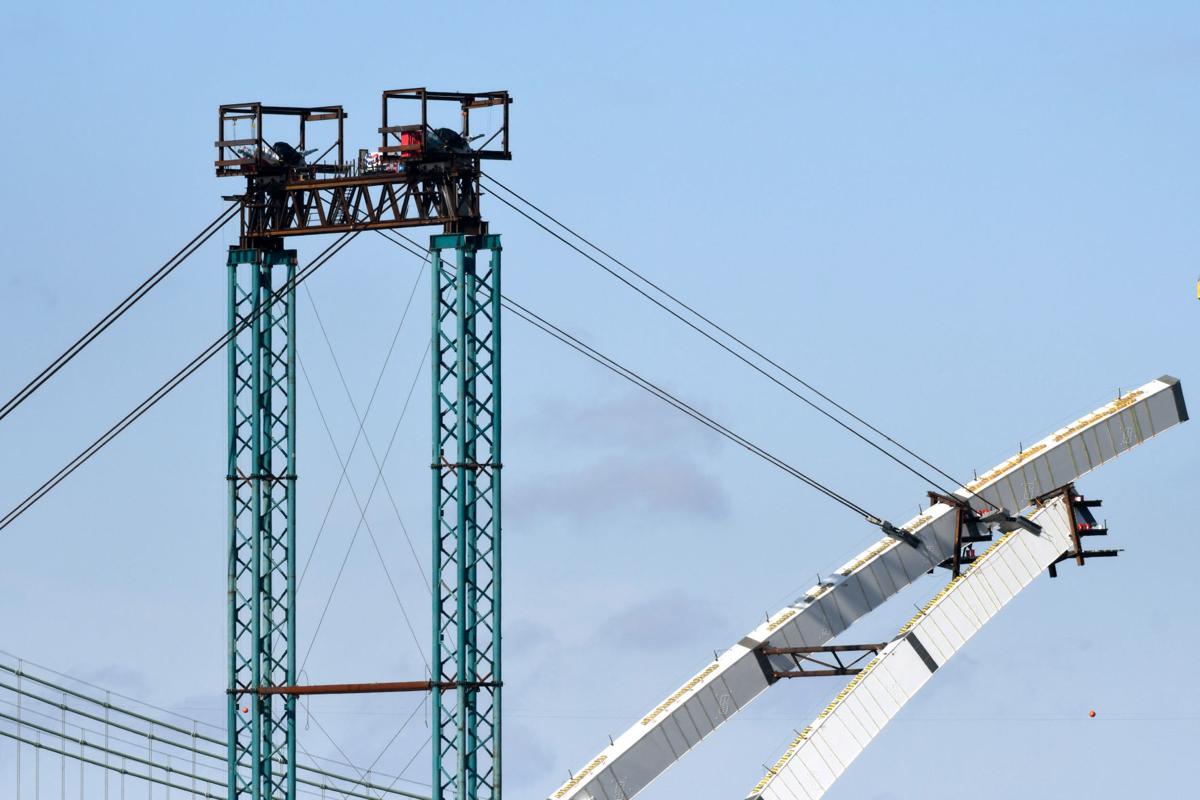 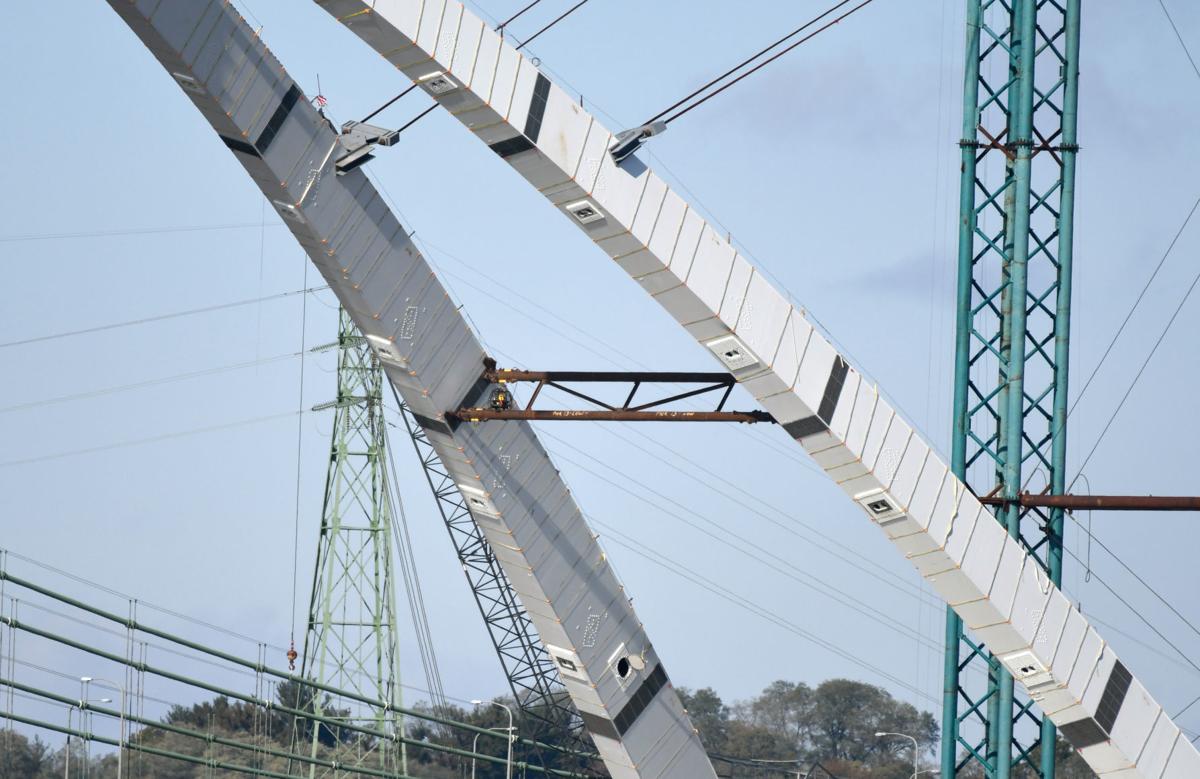 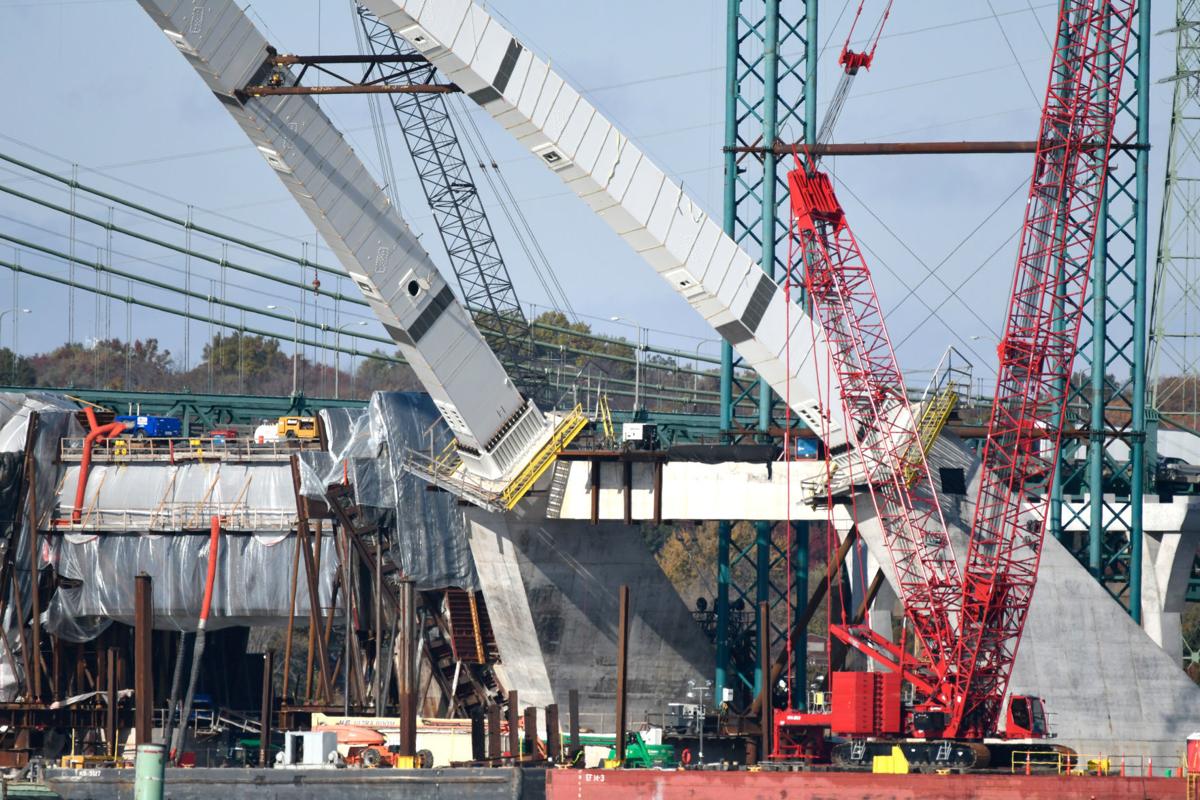 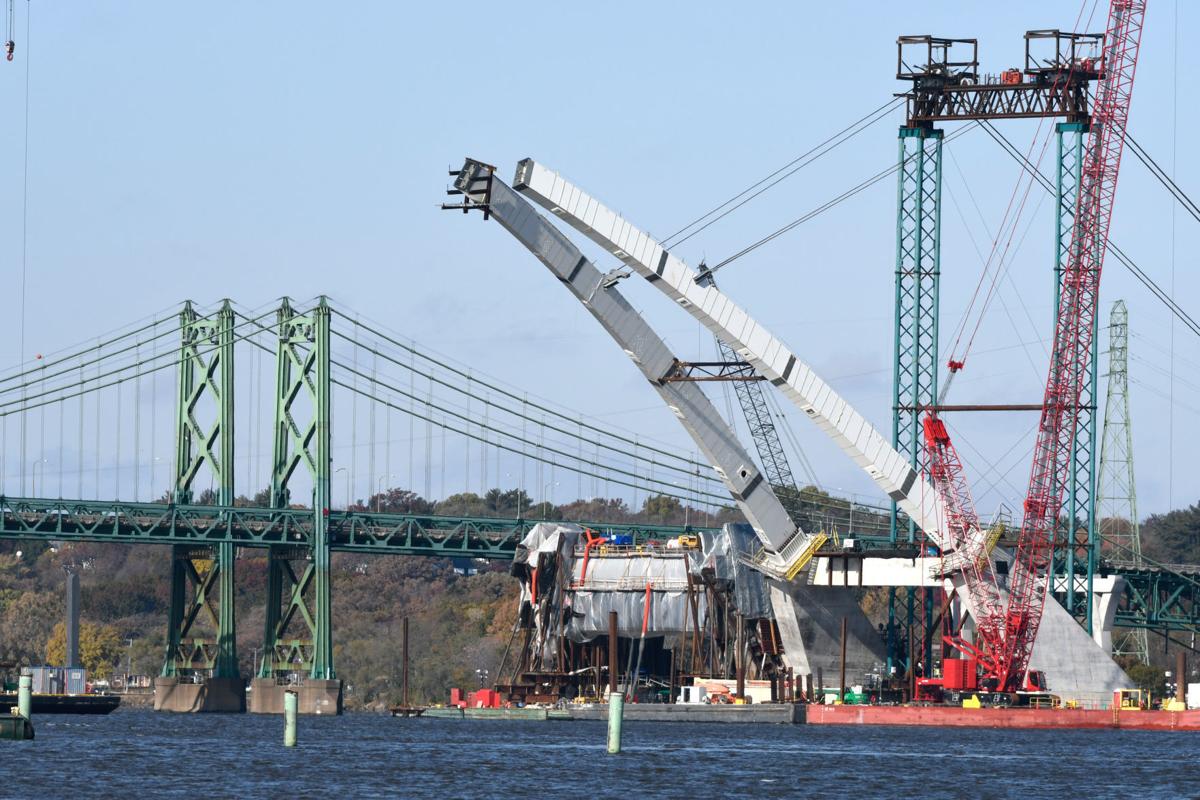 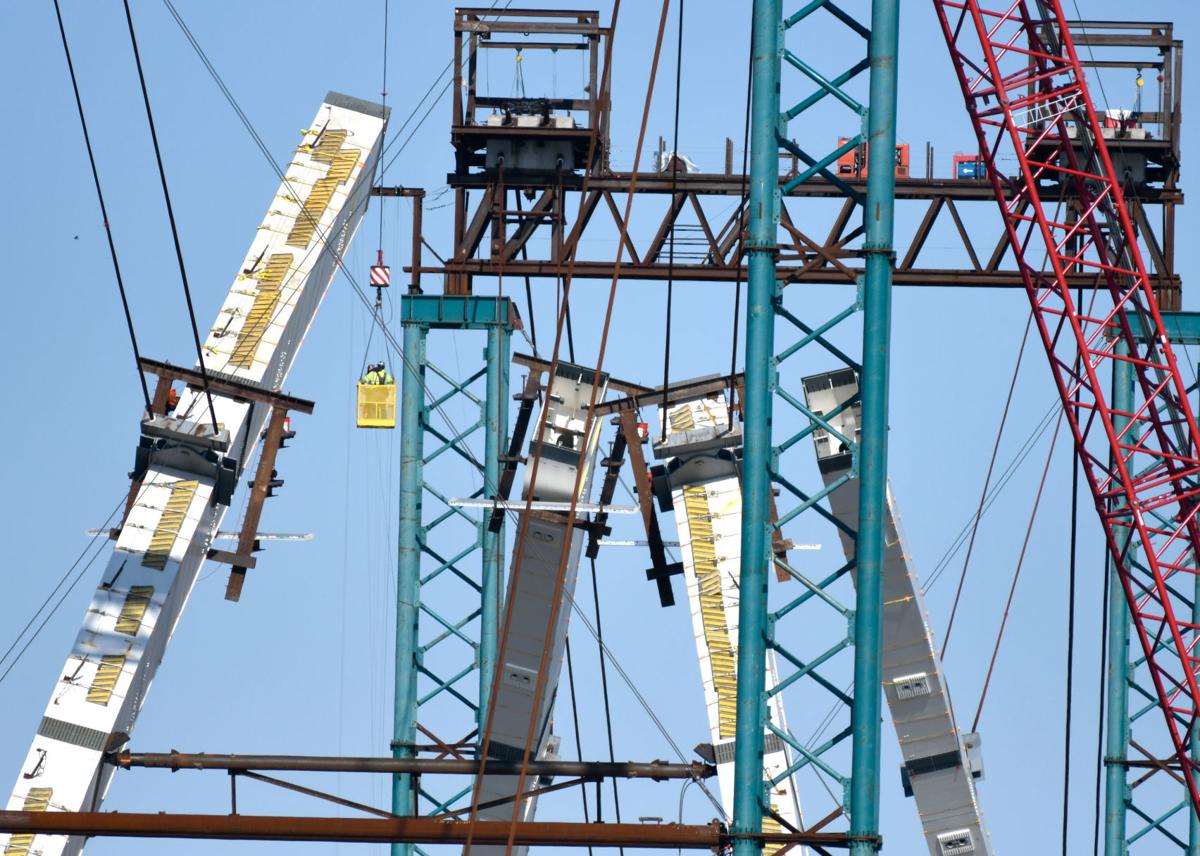 Two construction workers on the new Interstate 74 bridge are ferried down to the ground from the arch on the Illinois side of the river Tuesday in Moline. 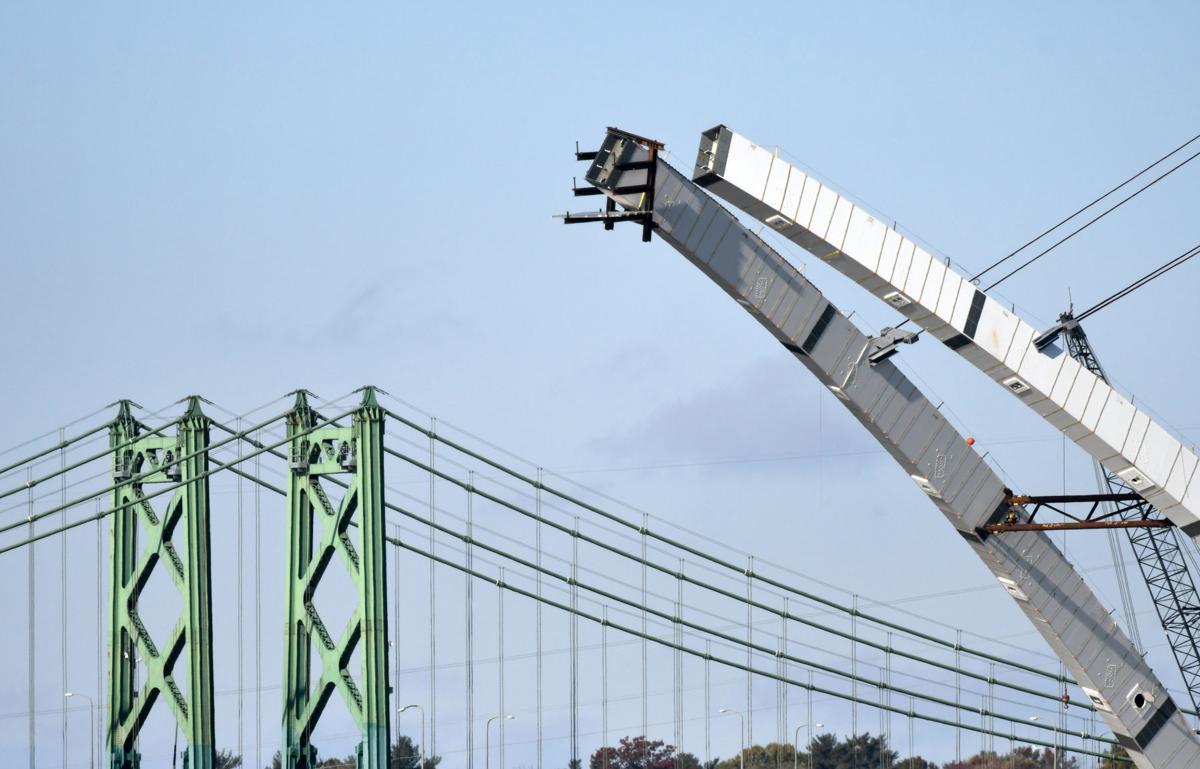 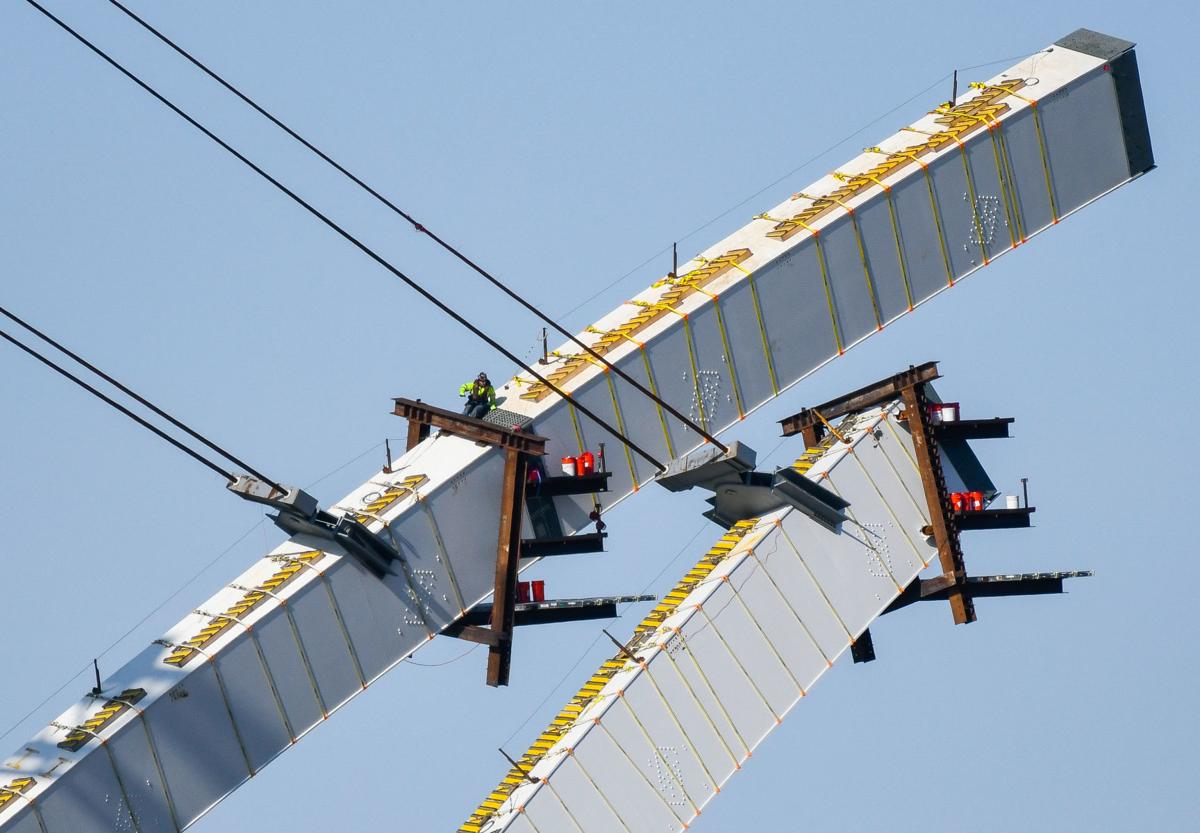 A construction worker carefully traverses across the top of the Interstate 74 bridge arch, on the Illinois side of the river, Tuesday, Nov. 5, 2019, in Moline. 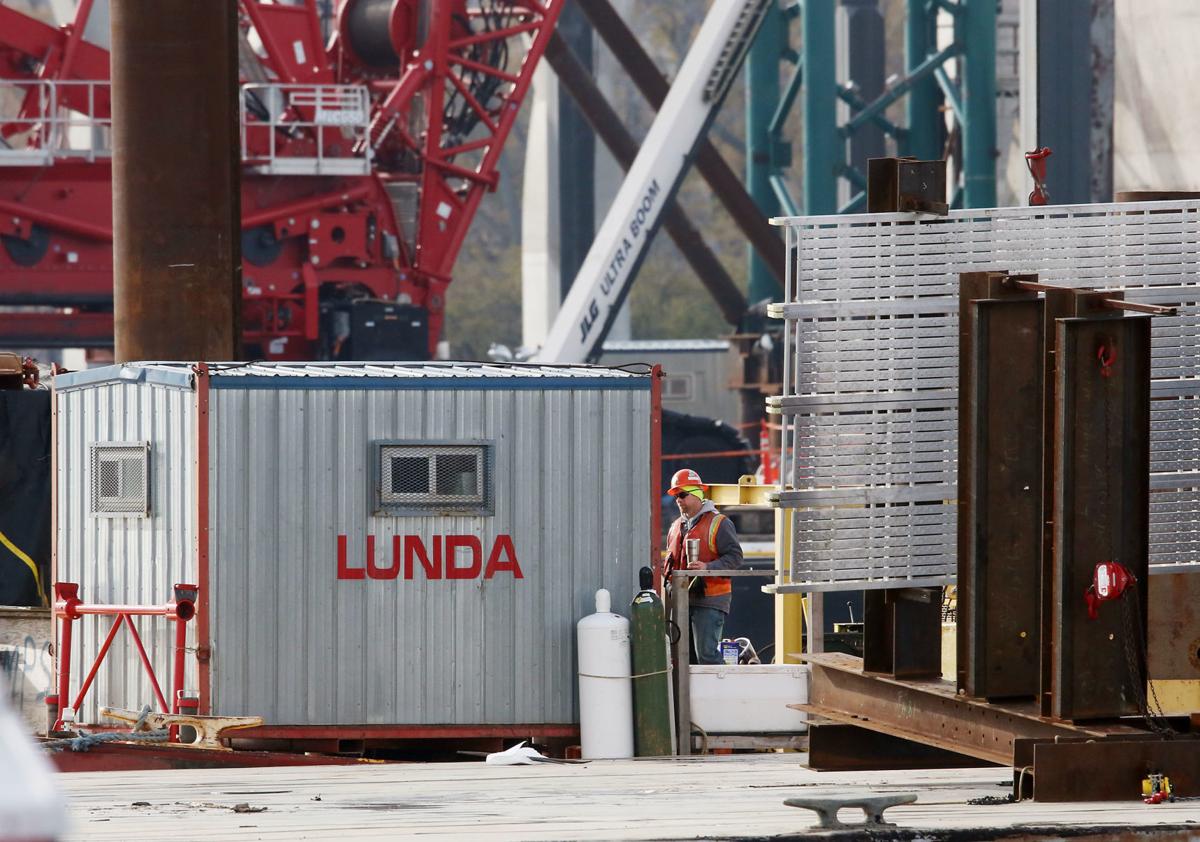 Workers go into a metal shed used as Lunda office space on one of the barges in the Mississippi River for the new Interstate 74 bridge project Monday.

Two construction workers on the new Interstate 74 bridge are ferried down to the ground from the arch on the Illinois side of the river Tuesday in Moline.

A construction worker carefully traverses across the top of the Interstate 74 bridge arch, on the Illinois side of the river, Tuesday, Nov. 5, 2019, in Moline.

Workers go into a metal shed used as Lunda office space on one of the barges in the Mississippi River for the new Interstate 74 bridge project Monday.

Current and former workers on the new Interstate 74 bridge say the primary contractor intentionally kept bridge construction off schedule over the summer in a clash with the state over funding.

As of Thursday, the Iowa DOT was acknowledging for the first time that construction is likely to lag about a year behind schedule. The westbound (Iowa-bound) span was to be finished this season. Bad weather and other delays pushed the schedule to the middle of next year. But that target may be missed too.

"We are pleased with recent momentum of setting the latest segments of the arch, however, there is still a lot of work to be done, and it is more likely that the completion of the Iowa-bound bridge will be in the second half of 2020," Danielle Alvarez said Thursday. She is the Iowa DOT's project manager for the I-74. "The completion schedule is dependent on the arch. Our priority is constructing a safe, sound structure and we are proactively taking steps to mitigate delays and complete the Iowa-bound bridge as quickly as possible."

Lunda Construction, based in Black River Falls, Wisconsin, is building the bridge. Of the estimated $1.2 billion in total costs for the span, ramps and related roadways, Lunda's original contract with the Iowa Department of Transportation was about $322 million.

In the spring, the DOT allocated about $16 million more to pay for more workers, among other things, to make up for lost time related to weather. Under the contract modifications, Lunda estimated it would finish the arch and the arch floor system for the westbound span by Nov. 4. On that date last week, the arch was not halfway finished, and no part of the floor system had been erected.

A former supervisor for Lunda said he was directed to keep bridge workers "off schedule" as the company sparred with the Iowa DOT over the release of contract-modification money. He said he was told to keep his orders "hush-hush," which was the same expression used by ironworkers who said they were pulled off bridge work over the summer.

"The I-74 bridge arch is a complex structure that presents unique challenges," according to a statement issued Thursday by Lunda in response to a list of questions supplied by the Quad-City Times. "Lunda has encountered issues with the design; specifically the geometry of the arch and tolerances utilized in the design."

While Lunda has maintained the design for the bridge is "not constructible," the project manager for the Iowa DOT said the state disagrees.

At issue: Design of bridge

The new westbound span of the I-74 bridge originally was scheduled to open this season.

Last winter was long and harsh, and the spring brought repeated and record flooding. As a result, construction was delayed.

However, the cooperative summer season did not deliver the kind of progress that was expected. Alvarez, I-74 project manager for the DOT, has repeatedly answered questions about the ongoing delays by pointing to the complicated nature of the basket-handle design arches. It is essential the arch segments rise in a precise trajectory from their piers on the river to their meeting point high above it.

Lunda spent a total of 55 days building a pulley-like stay-cable system that is used to guide the arches. By Thursday, a total of 16 arch segments were attached, leaving 18 to go for the westbound bridge. A DOT official initially said the entire arch-raising process should take just a few months, but eight months have passed since the first segment was set.

"Lunda is in control of scheduling each individual aspect of the bridge construction," Alvarez said. "The length of time to erect the stay-cable system was longer than anticipated, based on Lunda's schedule.

"Iowa DOT has continued to coordinate with Lunda to keep work moving, as evidenced by the recent erection of four new arch segments."

The statement from Lunda indicates the company did not delay work "under its original contract scope," but the company declined to address specific accusations and questions.

"At no point in this project has Lunda delayed work under its original contractual scope. Lunda looks forward to continuing in the partnering process to work through the issues of geometry, tolerances and contractual interpretation with the (DOT) to successfully complete this unique and exciting project."

Alvarez confirmed negotiations are ongoing and said the DOT does not agree with Lunda's assertion the bridge design is flawed.

"There have been discussions regarding clarifying tolerances, or in lay terms, the degree of accuracy needed each time a piece of the arch is set," she said. "Although the DOT has provided clarification of tolerances in response to Lunda’s requests, our position is that at all times it remains constructible."

The Iowa Attorney General's office has been involved in relations between the DOT and Lunda. As the DOT's legal counsel, however, the Attorney General cannot disclose the nature of its role in the contract matters, given the attorney-client relationship.

Lunda is using ironworkers from Quad-City-based Local 111 and from Joliet-based Local 444.

Some ironworkers spoke on the condition of anonymity. Several who previously spoke with the Quad-City Times about their pride in taking part in the historic build of the new bridge were disciplined by Lunda for doing so, they said.

Several of the ironworkers reported being pulled off ironwork on the bridge without explanation. They instead were assigned "busy work," such as fabricating dozens of frames that later were scrapped.

An engineer for a competing bridge-construction company, also speaking anonymously, said many in engineering and bridge-building circles have been questioning the delays on the I-74. Specifically, the engineer said, arch construction has taken way too long, especially given the cooperative weather during the summer construction season.

He introduced the notion that Lunda was claiming the bridge design was "not constructible," which the DOT and Lunda later confirmed. The bridge was designed by Pennsylvania-based bridge-design firm Modjeski and Masters. The firm's founder designed the Government Bridge at the Rock Island Arsenal and the original spans of the I-74.

The slow-moving progress that has marked the summer season has prevented Lunda from taking receipt of some of the additional money allocated by the DOT for catch-up work.

Of about $16 million outlined in a March contract modification, Alvarez said, only $3.9 million has been paid. The funding was earmarked for nighttime make-up work to expedite westbound-bridge construction.

A former supervisor for Lunda said he recently separated from the company, partly because he refused to supply the DOT with dishonest answers for delays. He said he felt like he was doing "a top-secret job."

The former employee, competing engineer and two ironworkers each categorized the bridge delays as attempts by Lunda to "hold hostage" the I-74 build until the DOT agreed to pay more money.

"We review all requests for additional compensation, and there is a process for coming to an agreement within the contract," Alvarez said, noting contract modifications are "common" on construction projects.  "There are some items that we've come to an agreement on and some where we are still negotiating with Lunda."

Record-breaking weather events haven't been the only foes of Interstate 74 bridge construction.

Progress, setbacks for I-74 bridge arches

The bartender hustled over with a cup of warm water — a tea bag on the saucer, lemon wedges …

Lateral braces are being added to the I-74 bridge arch. What's up with that?

Another target on the construction timeline for the new Interstate 74 bridge is being missed.

Even as the lead contractor on the new Interstate 74 bridge says the steel arches are "not constructible," work continues.

More progress has been made on the arches for the new Interstate 74 over the past month than was made all summer.

Second strut being installed on I-74 bridge, 10 arch segments remain

A critical piece of the arches for the new Interstate 74 bridge is in place, and the first news on arch alignment is good.

Even as the lead contractor on the new Interstate 74 bridge says the steel arches are "not constructible," work continues.

Get the latest Crime & Courts news in your inbox