Musician gets his show on the road, and brings it to Muscatine
Share this
Return to homepage × 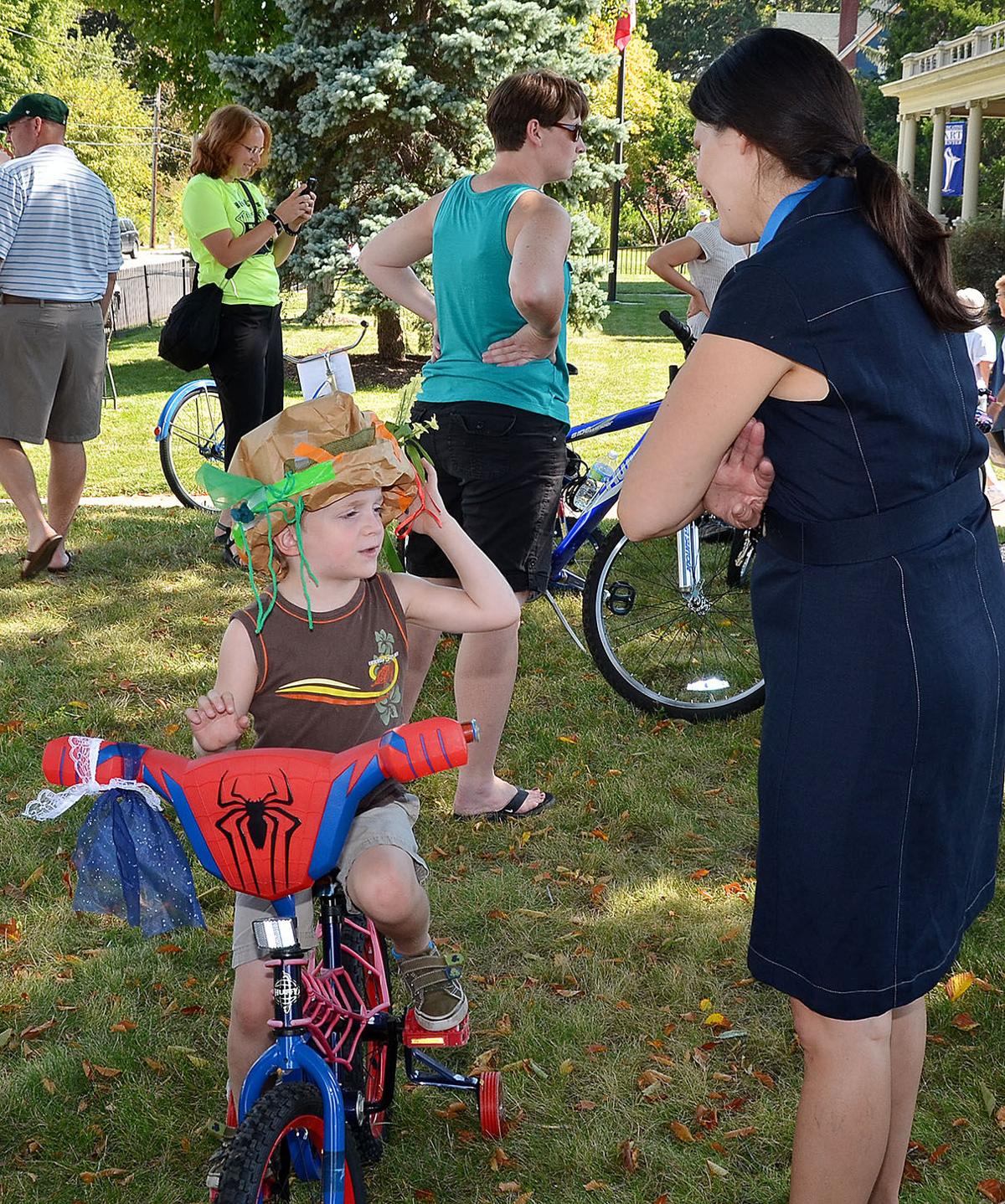 Eli Van Winkle, 5, of Muscatine, tells Muscatine Art Center executive director Melanie Alexander about the hat he made and about his Spiderman bicycle before the start of Mr. B’s Boogie Woogie Parade. Following the parade Mr. B’s Joybox Express performed on the lawn near the Stanley Gallery. 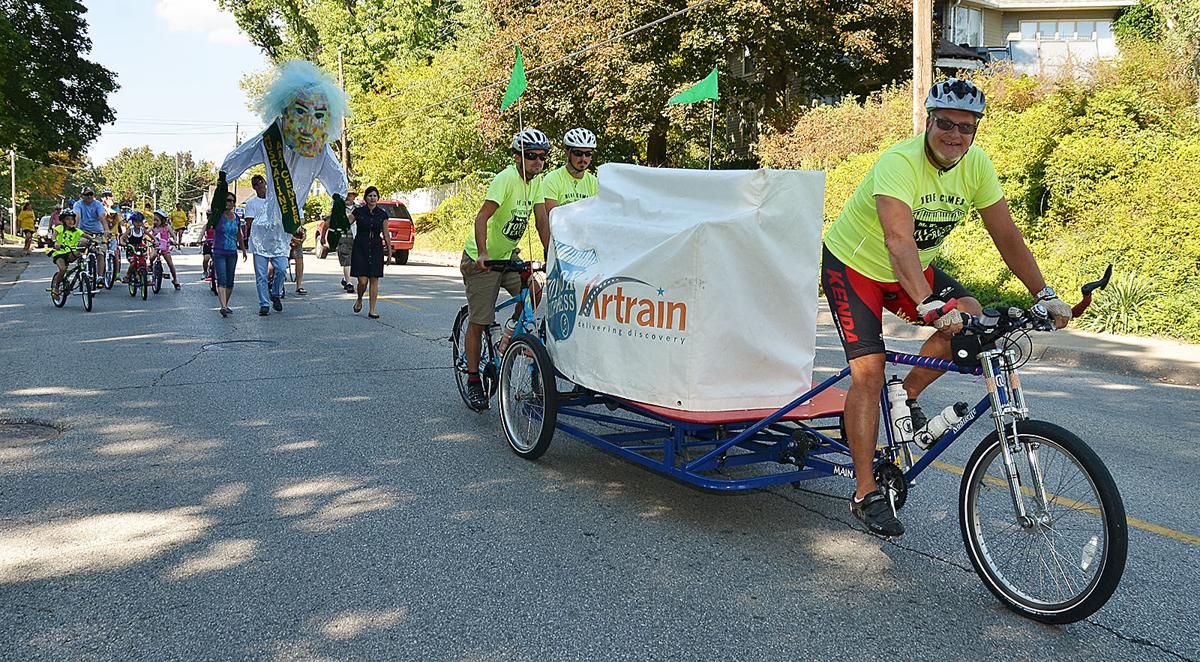 Mark Braun and his crew lead a bike parade down Mulberry Avenue prior to his performance at the Muscatine Art Center Sunday afternoon.

MUSCATINE, Iowa — It was a musical day for visitors to the Muscatine Arts Center Sunday afternoon when Mr. B's Joybox Express rolled into town.

The Express was part of a musical parade and show sponsored by the center as part of a free program that day. Led by Ann Arbor, Michigan, blues and boogie-woogie pianist Mark "Mr. B." Braun, the Express is part of a 2,000 mile-plus musical tour of communities along the Mississippi River.

It's sponsored by the Ann Arbor, Michigan-based Artrain Inc., a nonprofit group dedicated to providing arts and cultural programs to communities around the country. Shoshana Hurand, the tour's manager, noted that Artrain began more than 40 years ago sponsoring visual arts-based programs traveling around the country by train, but has diversified its presentations in recent years.

"We had some real nice opportunities to play for people so far," said Braun. "We're just eager to engage with as many people as possible and get people involved."

The goal of the tour is to promote not only music, but physical activity, as well. "It's to show both are important for an active life," Hurand said.

The Express has been doing that since beginning its tour Sept. 1 at Lake Itasca, Minnesota, the source of the Mississippi, and began heading to its destination in New Orleans, which performers hope to reach in 76 days. The centerpiece of the tour, the Joybox Express, is a 625-pound platform powered by three people on three attached bicycles transporting a Baldwin Acrosonic Console piano on the piano.

Accompanying Braun on the tour has been drummer and bike mechanic Sam Genson, as well as Artrain production team members Marty Stane and Jules Cunningham, with the four of them switching biking duties between them. A documentary crew is also accompanying the group for a feature on the trip.

That voyage has been a challenging one at times, with the hilly terrain along the upper Mississippi River area. To help avoid some of the hilliest areas around the Dubuque area, they traveled for a time on the Illinois side of the river. However, the weather, their equipment, and the riders themselves have been holding up well to the rigors of hauling a nearly one-third ton piano via pedal power, though the piano might need a tuning once the trip is done.

"We've had a lot of good fortune," Braun said.

The performance was just one of the events at the center Sunday. Among the other organizations there were the Muscatine chapter of the Pilot Club International, which was sponsoring a puppet show for children.

Betsy Hirshfeld, a new math teacher at Muscatine High School, heard about the event during an earlier visit to the center. She brought her 7-year-old daughter and 5-year-old son to the event, and both seemed eager to decorate their own bicycles as part of an art project.

"I thought it looked really fun," she said.

Jessica Olson, Muscatine, heard about the event from her mother, Diane Orr-Kelly, who was volunteering at the event, and decided to bring her daughters, Belize and Bella, down to the event.

"This one (younger daughter Belize) fell asleep, but [Bella's] having a good time," she said.

Performer will carry a tune all the way to Muscatine

MUSCATINE, Iowa — Visitors to the Muscatine Art Center on Sunday, Sept. 28 are in for a rare treat when blues and boogie-woogie piano player M…

Eli Van Winkle, 5, of Muscatine, tells Muscatine Art Center executive director Melanie Alexander about the hat he made and about his Spiderman bicycle before the start of Mr. B’s Boogie Woogie Parade. Following the parade Mr. B’s Joybox Express performed on the lawn near the Stanley Gallery.

Mark Braun and his crew lead a bike parade down Mulberry Avenue prior to his performance at the Muscatine Art Center Sunday afternoon.