Ernie’s Tire Shop, circa 1933, from a photo in the 1992 Muscatine Journal book, “A Pictorial History of Muscatine.” 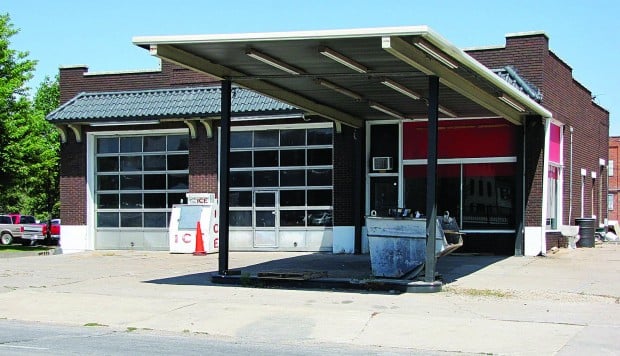 MUSCATINE, Iowa — A building that once helped people keep their cars moving will soon be a place where they come to rest for awhile.

The former service station at

111 Mulberry Ave. — at one time the oldest gas station in Muscatine, until it closed —will make way for a parking lot for HNI Corp.

Gary L. Carlson, vice president, member and community relations at HNI, confirmed the building will come down soon to add parking for its employees.

“We now find ourselves somewhat limited in parking. So we’ve decided to take that and the metal building behind it down,” he said.

Carlson added that the company has long had a commitment to investing in Muscatine and the downtown area, pointing to extensive work done to the former Morgan Machine Shop and Auto Parts building at 408 E. Second St. that now houses HNI offices.

The added parking, he noted, is a natural progression of a growing company that needs to respond the employee’s needs.

“We have to provide good parking for employees and we’d like them to park somewhere safe and convenient for them.”

in 1933, the building was eventually purchased by Leo Grosjean and became home to a family business

In 1943, Leo Grosjean moved his Home Oil Co. into the building and various family members owned or operated it under different names until 2001 when Matt Beason took over and operated it as Matt’s Downtown Service. John Grosjean purchased Matt’s about a year later and reopened the business as Grosjean’s Auto from 2003-09.

After the business closed in 2009, the building was purchased by HNI Corp.

Carlson said that due to the building’s age, the company took the step of notifying the Muscatine Historic Preservation Commission to document it before it came down.

Jane Reischauer, Chairwoman of the Historic Preservation Commission, said the building was originally built by Ernest Root. The Grosjean family purchased it in 1943 and it had been a gas or service station until it closed.

Reischauer visited the building Thursday morning to document it and take photos for the commission. She said since the building has been included as part of a national historic district, the city has to report any changes, including demolition, to the state.

“I was taking photos just for documentation purposes to keep on file at the city,” Reischauer said.

Although she and the commission would like to see the building stay intact, Reischauer said the city doesn’t have any sort of tool in place that prevents owners from tearing down a building on their property, even in a historic district.

“The Historic Preservation Commission would like to see all buildings in the historic districts be maintained as historic structures,” Reischauer said, adding the commission looks forward to working with HNI in the future on maintaining and improving the city’s historic districts.

She added that at this point, the commission knows that demolition is likely.

Carlson said the asbestos in the building has been removed and he anticipates the building coming down in the next 30 days or so.

“The best we can do,”  Reischauer said, “Is document the building’s past.”

8 children in van killed in crash in Alabama

Inflation ahead? Economist says it's complicated

Inflation ahead? Economist says it's complicated

According to a 2005 report prepared for a Site Inventory Form for the State Historical Society of Iowa (see link elsewhere with this story), t…

Barry Sulzberger of Sulzberger Excavating of Muscatine works on tearing off the roof of the former service station at 111 Mulberry Ave. Tuesda…

Ernie’s Tire Shop, circa 1933, from a photo in the 1992 Muscatine Journal book, “A Pictorial History of Muscatine.”