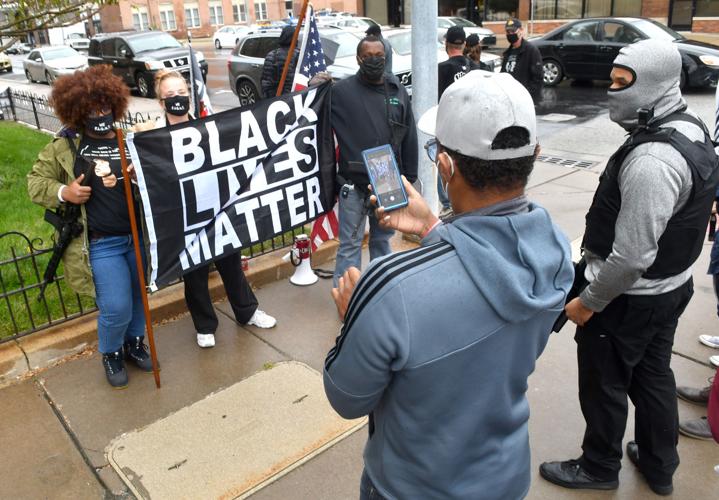 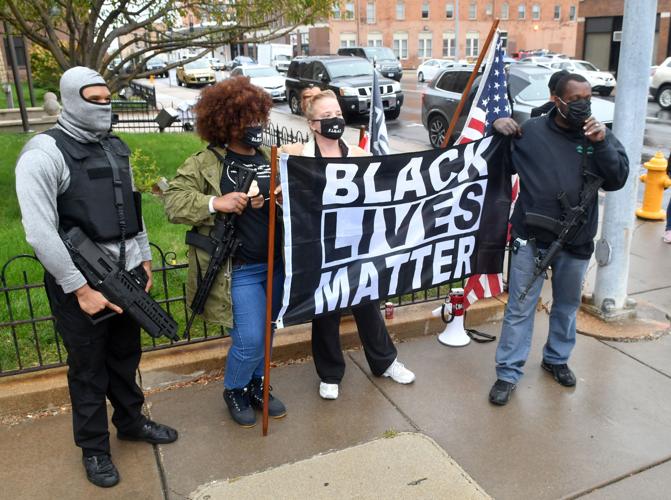 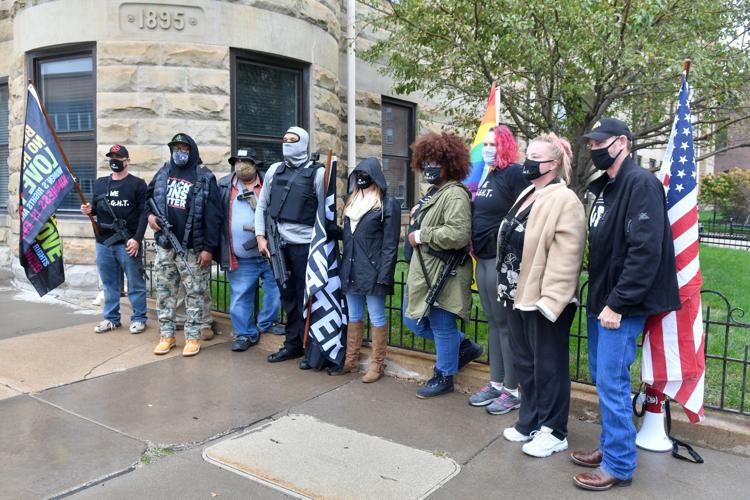 Members of We F.I.G.H.T. stand for a group photo outside Davenport City Hall. 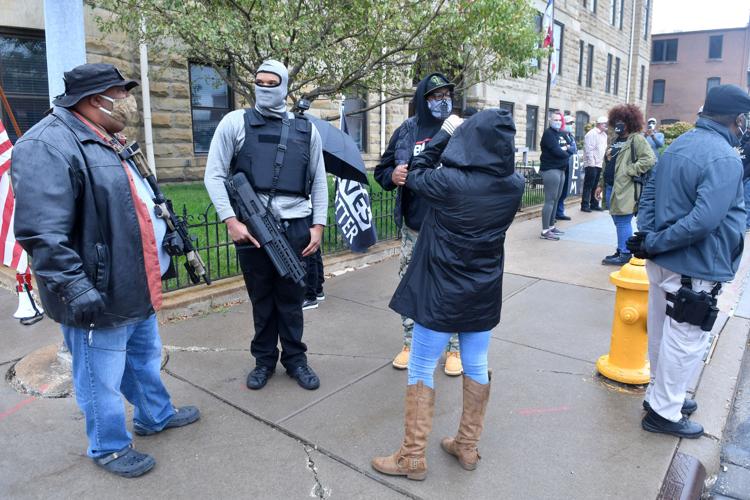 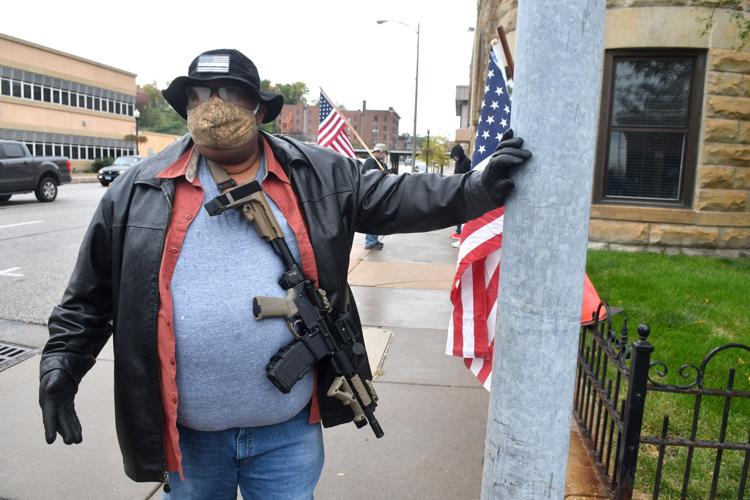 Narren Brown drove three hours from Cresco, Iowa, to Davenport on Saturday to attend an open carry rally in support of gun rights and all civil rights that was held in front of Davenport City Hall beginning at 4 p.m.

Brown, who operates thewellarmedprogressive.com and is part of the National African American Gun Association, was one of about two dozen people who showed up for the rally that included American flags, Black Lives Matter flags and the rainbow flag of the LGBTQ community.

The event was organized by We F.I.G.H.T. which is an organization that supports the civil liberties of all human beings.

Everyone was armed in one way or another with some carrying rifles while others had their pistols holstered.

“I believe in exercising all of my rights,” Brown said. “I believe in safe gun ownership, and responsible gun ownership. I believe in two-way literacy and gun safety. My kids have been raised around weapons. They know what to do. When they see a gun they won’t touch it. They assume it’s loaded and they’ll get an adult.

“I see 2A as a civil rights issue,” Brown added. “And also, when I thought about this event, it was one of those opportunities that if the police were out watching or whatever, to what people of color look like carrying. You see it in the media all day long -- white organizations, whether they are right- or left-oriented in their political spectrum, out armed to the teeth and then you see in the media all day people of color getting shot for legally carrying. And so in Iowa we can carry openly, and you can carry concealed with your carry permit.”

Henry Hodges Jr., of Davenport, looked around at all the different people at the rally and said, “The diversity is what makes us America.”

Hodges said he attended the rally because he is a resident of Davenport who supports the Second Amendment. But as a man of color, he added, “I can’t walk to the store with my rifle because of the categorization, we’ll call it.

“So what gets me out here today? I’m in a hoodie, which is stereotypical, and I’m looking just normal. I’m just a normal American citizen with the right to carry and I don’t deserve to have the police called on me because someone sees me with a gun,” Hodges said.

If the police were around, they weren’t seen.

“Nothing but lawful, safe, responsible gun ownership here,” said Davenport attorney, Eric Puryear, who helped organize the event. Puryear also has organized other events recently to protest police brutality and also racism, said that he has cared about gun rights ever since he was in law school more than a decade ago.

“I’ve been an NRA certified instructor for as long as I’ve been an attorney,” Puryear said.

Part of the reason for Saturday’s rally, he said, is that in August, a person organized their own open carry rally that Puryear said was a thinly-veiled forum for hate. Puryear said it was important to have a rally with no hate, no racism, and embodies the respect for gun rights and civil rights of all humans.

“I think it’s important now, more than ever, for good people, good non-racist people, to be armed for self-defense,” Puryear said. “I hope the need never arises. Every life is sacred, everyone has people who love them; I certainly don’t want to use a gun against anyone.”

There are no shortage of gun laws, he added. There also is no shortage of crime or criminals. Even if society had all the mental health treatments available and perfect schools, there would still be people engaging in criminality.

And then there is the rhetoric from the racist extremists, he said, adding, “That’s the reason why good people should be armed.”

Melissa Gilbert, Clinton, Iowa, said she wants to “support the Second Amendment, and support everybody’s civil rights, especially those of women and people of color.”

Vernie Klein, of Platteville, Wisconsin, is the secretary for We F.I.G.H.T. said the Bill of Rights and civil rights are causes, “very near and dear to my heart.” Her grandfather was in World War II and was a police officer in Omaha, Nebraska.

“Civil rights is something I’ve always been passionate about and just standing up for everyone because I believe that everyone has the right to be able to express themselves, to be free, to be who they are,” Klein said.

Robert Gamble smiled and waved as some motorists honked their horns in support, or against, his efforts Sunday afternoon.

Rent prices continue to soar across the United States

Rent prices continue to soar across the United States

Potentially hazardous asteroid to hurtle past Earth on May 27

Potentially hazardous asteroid to hurtle past Earth on May 27

Members of We F.I.G.H.T. stand for a group photo outside Davenport City Hall.