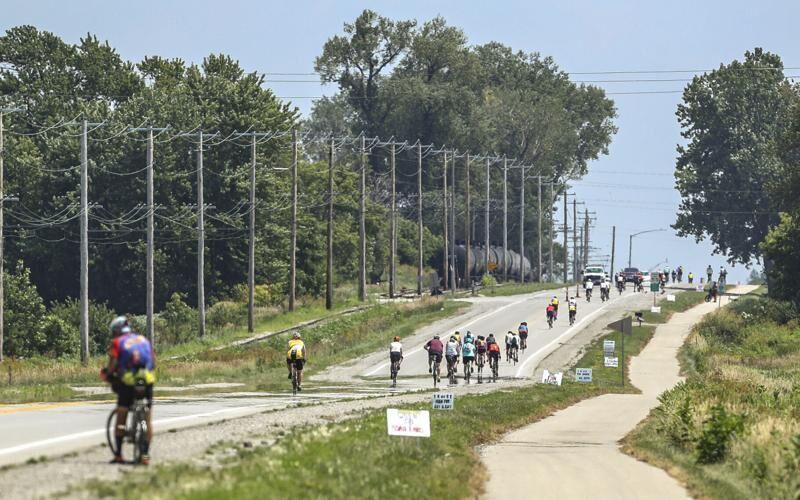 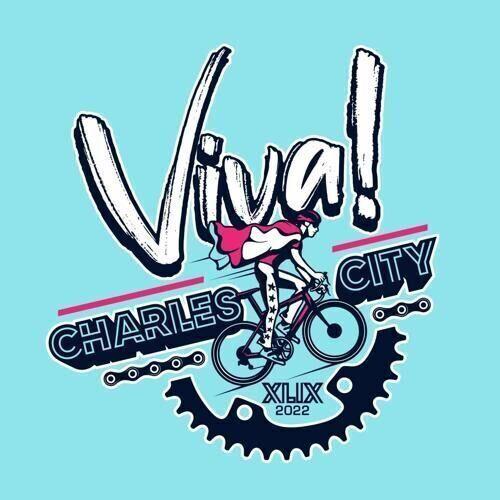 The logo for the Charles City pit stop of RAGBRAI

So the city is not shy in expressing confidence about the welcome riders will receive when they roll into town Thursday, the fourth stop of six on the 2022 RAGBRAI rout.

"We're always the best stop of the week when we host," said Phoebe Pittman, one of the many coordinators of the event.

The theme for Charles City is "Viva Charles City," a pep-in-your-step type of feeling with entertainment headlined by "Viva Knievel." There will be other music and activities on side stages.

The trek from Mason City to Charles City is roughly 47 miles. It is one of the shorter stops on the route with elevation just over 1,200 feet. Pittman has been told it is one of the easier days of RAGBRAI.

That's not only interesting fact about Charles City's day.

Pittman was told the number of bicyclists on the Friday portion of the ride has increased by 27%, per RAGBRAI headquarters in Des Moines. Charles City is expecting 20,000-plus riders.

"It looks like a delightful ride," Pittman said. "I don't think we were surprised. We've been ready for 20,000-plus people. Our previous hosting experience is really great practice for us."

The city of just more than 7,000 residents, per the 2020 Census, doesn't plan on taking any shortcuts on preparations.

Pittman expects as many as 20 vendors, with vegetarian/vegan offerings as well as a Philippine stand. The mix of entertainment will include ax throwing.

"We want to celebrate everything Charles City," Pittman said.

Dozens of residents have volunteered to host riders at their homes. Charles City will have numerous campsites and shower sites for people to get prepped and well rested for the next stop.

The community is oozing excitement.

"I know personally, I love hosting," Pittman said. "Charles City does a great job. When people like that are putting their best foot forward to greet 20,000 guests, it makes for a great time.

"It is why Charles City is going to be the best stop of the week."

Charles City Police Department Captain Brandon Franke stated several road closures are to be expected. Those will start on Wednesday night and run through Friday morning.

They include Highway 14 and main street, blocking off the northbound traffic. Nearly every intersection will be blocked off on main street. It will flow down to main and Ferguson street.

The only intersection that will be manned by police will be Gilbert Street and main.

"We're going to start blocking off the night prior," Franke said. "We started planning the day we knew they'd be coming here. It has been an ongoing process."

He and Pittman encouraged citizens to get out Thursday, greet the riders coming into town and participate in the festivities. In that same breath, both urged safety and high awareness.

"Town is definitely going to be full of people," Franke said. "Just be careful."

Zach Martin is a sports reporter for the Globe Gazette. Reach him via email at zachary.martin@globegazette.com and follow him on Twitter @zach_martin95.

PHOTOS, VIDEOS and ARTICLES on RAGBRAI 2022

See coverage of RAGBRAI 2022 that stretches from Sergeant Bluff all the way to Charles City, Iowa

The logo for the Charles City pit stop of RAGBRAI