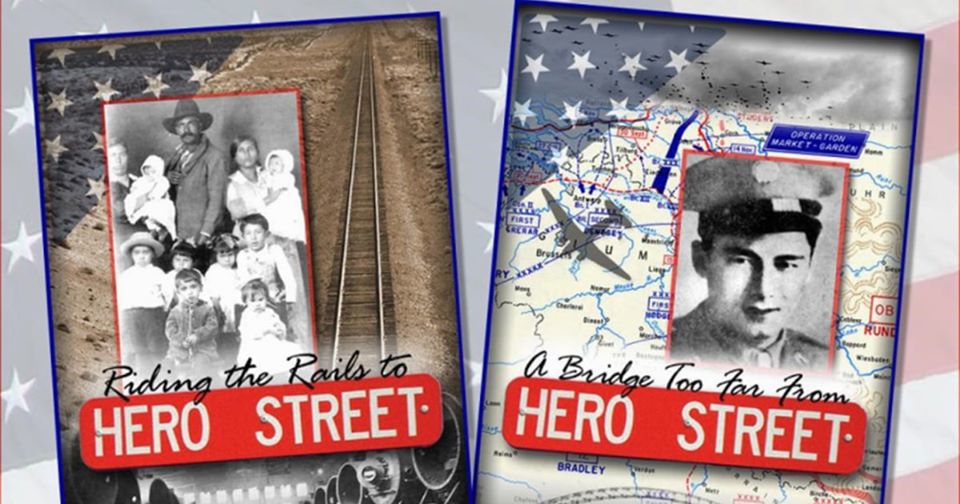 Poster art for the new documentaries "Riding the Rails to Hero Street" and "A Bridge Too Far From Hero Street." 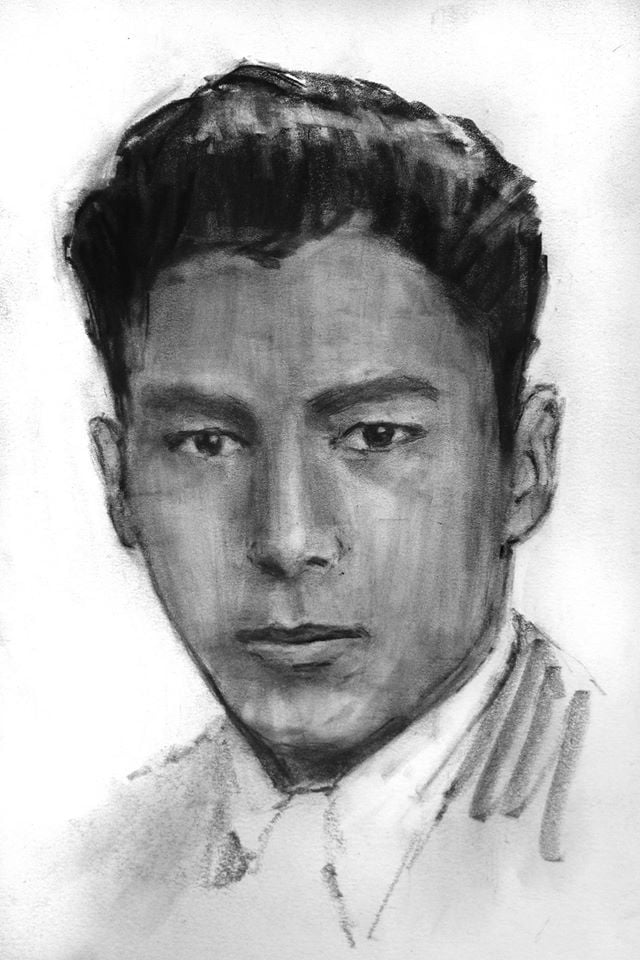 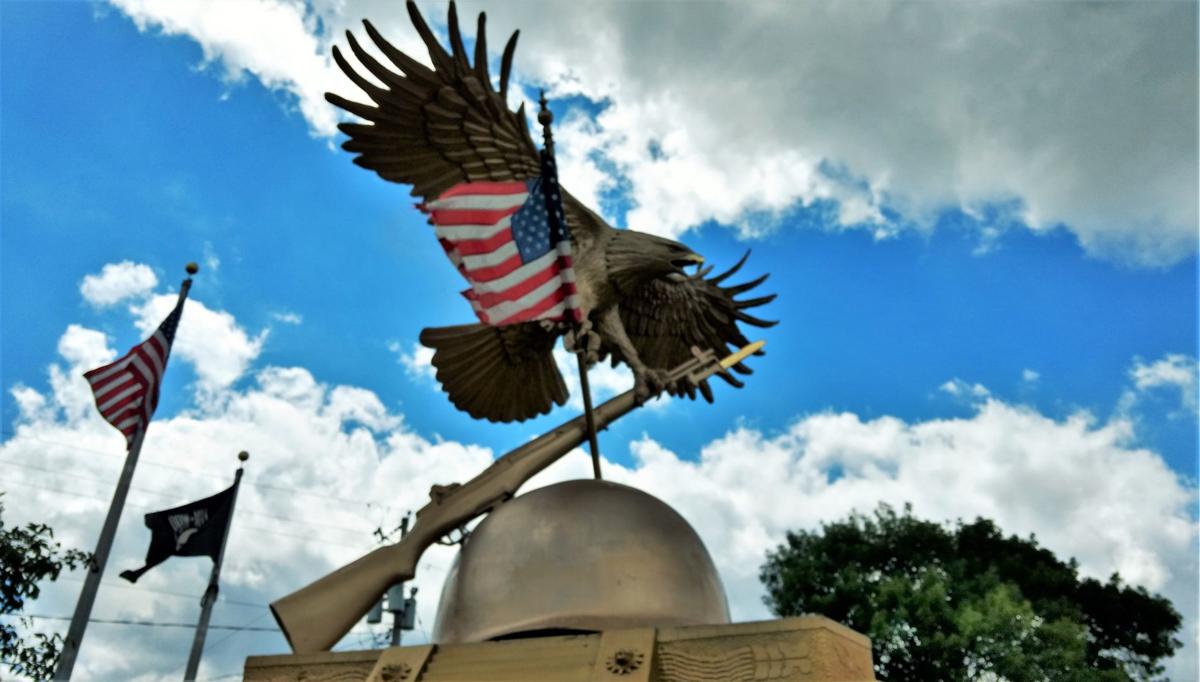 The Hero Street monument in Silvis will be the site of a veterans program on Nov. 9.

DAVENPORT – Fifty family members of Silvis veteran Willie Sandoval were among the 300 people who attended Sunday's premiere of two documentaries related to Hero Street, at the Putnam Giant Screen Theater.

“It brought me to tears seeing that reaction afterward, seeing these incredible people and incredible heroes get their due,” filmmaker Tammy Rundle, of Moline-based Fourth Wall Films, said Monday.

Relatives of Sandoval (killed in World War II at age 21) came from as far as Arizona, Tennessee, Colorado, and Indiana to see his story – “A Bridge Too Far From Hero Street” – and the companion prologue “Riding The Rails to Hero Street.” After the first showing, the audience gave Tammy and her husband Kelly a standing ovation.

“I liked it a lot,” Rufina Guerrero (Willie's 95-year-old sister) said Sunday of the films. “All of my brothers were heroes.” She and her brother Ruben (who died in 2018 at age 95) were interviewed on film by the Rundles. Ruben enlisted in the U.S. Coast Guard in 1943 and was honorably discharged in 1946.

That name was given by her friend, 18-year-old John Ponciano in 1954. “He was a high school senior and at that time, he and his brother Joe got together and they saw what we didn't – the fact that there were eight boys on this street that had been killed in action and that we should acknowledge, to change the name 2nd Street to Hero Street.”

Isidro “John” Ponciano (who died in 2011 at 74) wrote about the topic for a high-school project. The story then appeared in the Labor Daily, a now-defunct newspaper from East Moline. The article, which first suggested the name Hero Street, eventually became known nationwide. The street's name was officially changed in 1968.

Only a block and a half long, Second Street in Silvis lost six young men in World War II and two in the Korean War, more than any other street in America. Hero Street has provided over 100 service members since Mexican-American immigrants settled there in 1929 ("Riding the Rails" tells of that exodus from Mexico).

“Willie was a no-mess-around, good kid,” said Tanilo Sandoval, brother of the subject of the Rundles' “Letters Home to Hero Street” (a 2015 co-production with WQPT), Frank Sandoval (no relation to Willie), noting Willie and his brother Ruben were local boxing champions.

“We didn't have any sewage or electricity,” Tanilo said. “We had a dirt floor in the basement.”

“I couldn't understand that 4th Street, two blocks away from Hero Street, 4th Street had running water and sewer,” Joe Terronez, former Silvis mayor, said Sunday. “There was only one way we're gonna straighten this out and we'd get together, and we'd better start fighting. We're not gonna fight city hall from the outside; we've gotta get inside.”

Terronez served 26 years as a city alderman and four years as mayor. “Hero Street, I knew all the boys,” he recalled.

“I grew up on Hero Street. We were one family. Everyone knew everyone,” Solis said. “Everyone helped everyone. We all worked together. It was unlike anything else. To go outside Hero Street was like another world."

Kelly Rundle, who grew up in the Q-C, graduated United Township High School in '77 having never heard about the street. “That's how it was. I'm not proud of it," he said.

The planned 10-part Hero Street documentary series (including one episode for each hero) is meant to rectify that. The two new episodes will be shown on WQPT-TV on Thursday, Nov. 21 at 8 p.m.

In September 1944, Willie Sandoval was part of the ill-fated Operation Market Garden. In the wake of the successful D-Day operation, the plan was for Allied forces to capture strategically important bridges in the Netherlands, creating a path to strike at the heart of Germany.

In the largest air assault in history, Sandoval was among 20,000 paratroopers who leaped into the sky over German-occupied Holland. They secured the Grave Bridge and then assisted in taking the bridge at Nijmegan. On Oct. 6, 1944, his outfit was overrun while engaging the enemy near Zyfflich, Germany, and Sandoval was killed, though his body was never found.

Among the Hero Street eight, the body of John Munos (killed in Korea) was also never recovered; all their graves are at Rock Island National Cemetery on Arsenal Island.

"A Bridge Too Far From Hero Street" features original art from Davenport's Bruce Walters and guitar music from Joe Soliz, whose father was the nephew of Claro.

“We have wanted to work with Bruce Walters for a long time," Tammy Rundle said. "He's just such an incredible artist, here in the Quad-Cities. We have such limited photos of Willie. Cameras were not part of their inventory. This might be the perfect project. Bruce delivered. He was so good."

Dependent on securing funding, the final installment will document how Hero Street was paved, renamed and memorialized, including the creation of its park and monument.

"Unbelievable stories of Hero Street and these amazing families," Dave Herrell, president/CEO of Visit Quad Cities, posted on Facebook after seeing the films. "The amount of sacrifice and perseverance was extremely emotional and inspiring. I encourage you to watch and learn about Hero Street. I took my 10-year old son Lucas and we learned and took away a lot to think about.”

DAVENPORT – Seventy-five years ago, William Sandoval was part of the largest air assault in U.S. military history. The story of the 21-year-ol…

Two new films in the Fourth Wall Films' Hero Street documentary series will premiere on the eve of Veterans Day, Sunday, Nov. 10, at the Putna…

Watch now: Pelicans on the Mississippi River on Sunday, Mother's Day, in Davenport

Watch now: Pelicans on the Mississippi River on Sunday, Mother's Day, in Davenport

Watch now: Barb Ickes was live as the keystone was put in place the Iowa-bound arch of the new I-74 bridge

Watch now: Barb Ickes was live as the keystone was put in place the Iowa-bound arch of the new I-74 bridge

Poster art for the new documentaries "Riding the Rails to Hero Street" and "A Bridge Too Far From Hero Street."

The Hero Street monument in Silvis will be the site of a veterans program on Nov. 9.