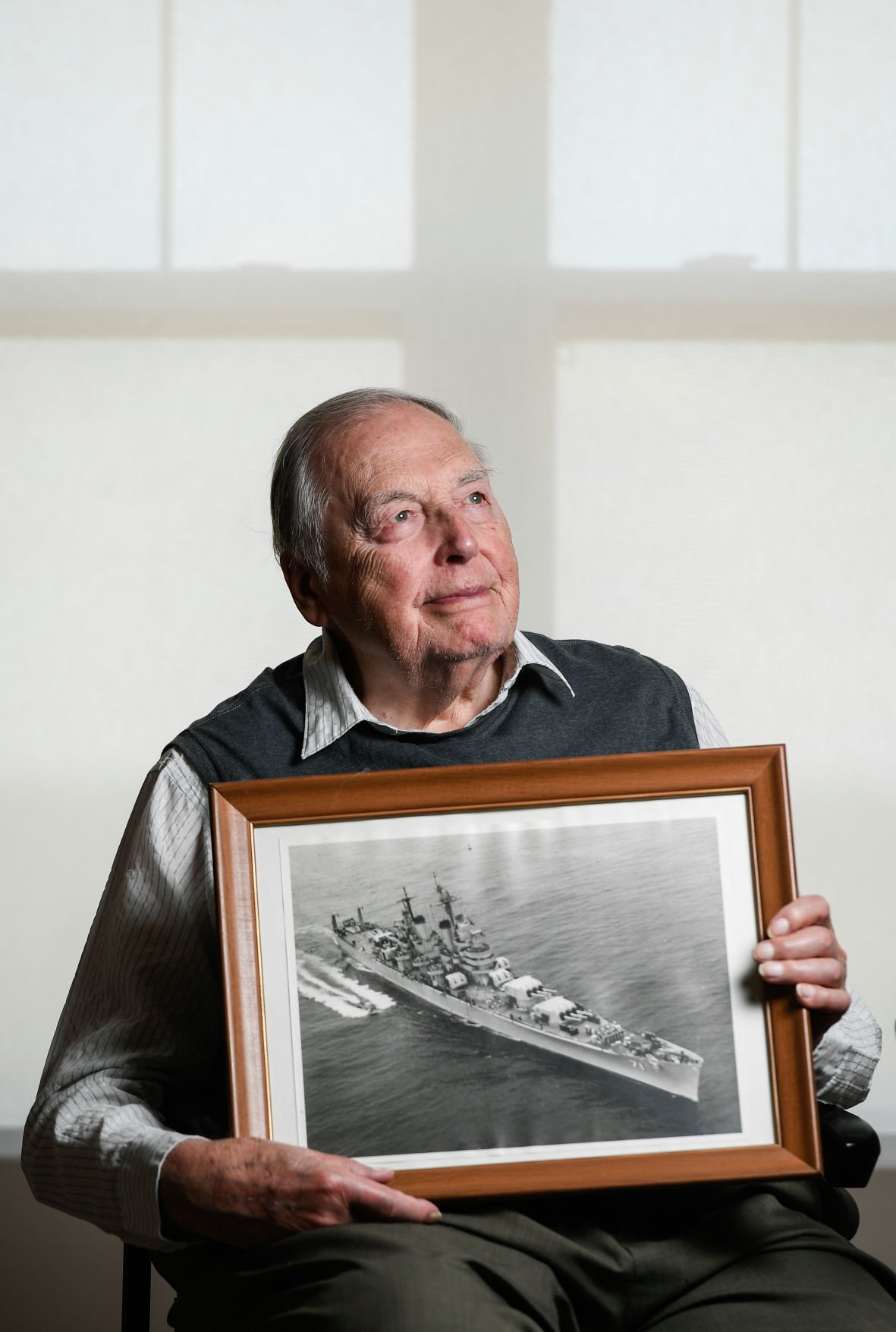 World War II veteran Henry Setton, of Moline, poses for a portrait with a photograph of the USS Quincy (CA-71), the ship he served on during the war. 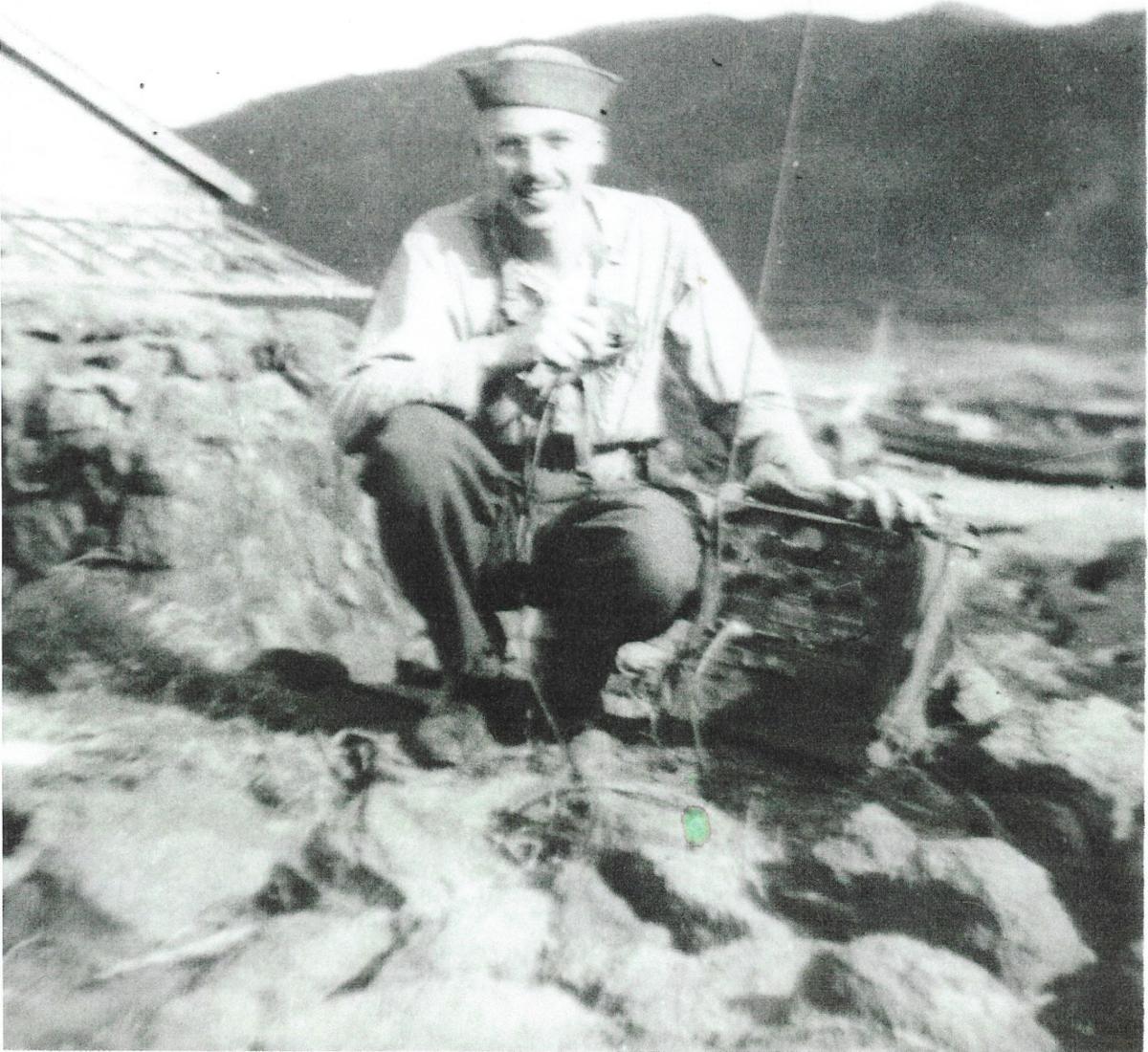 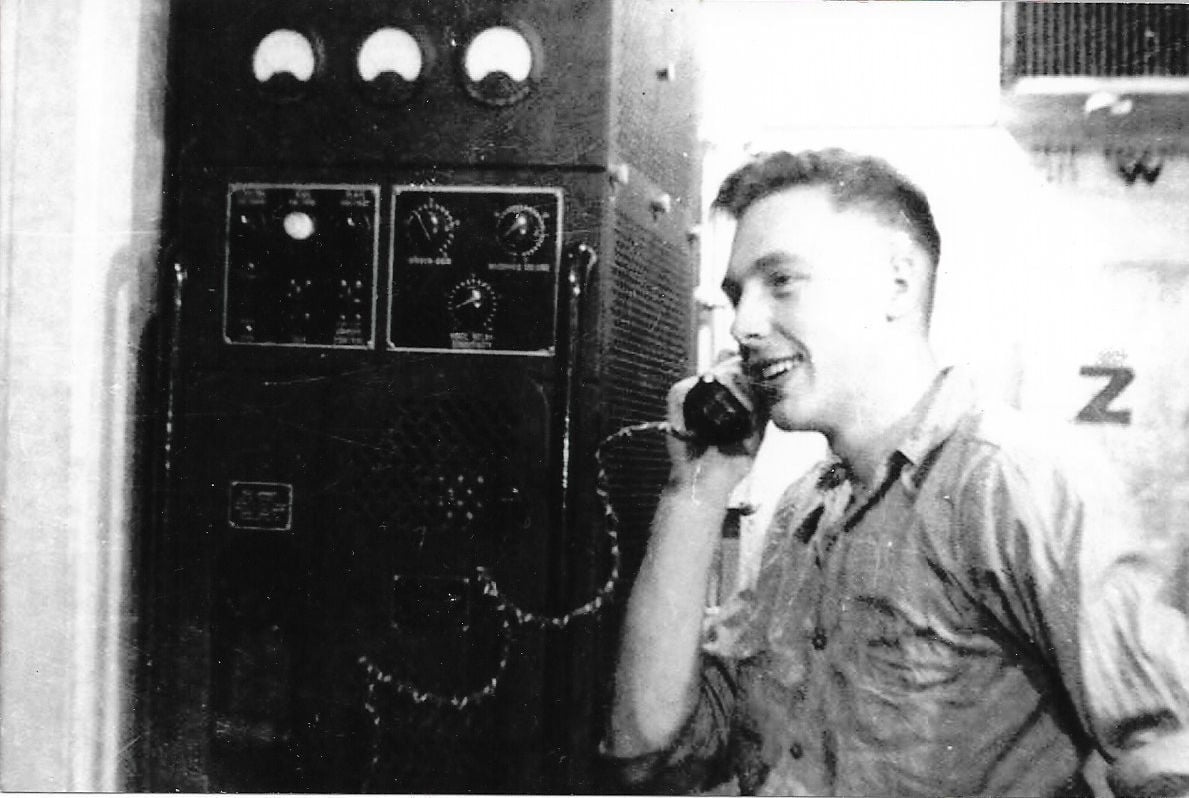 Henry Setton onboard the USS Quincy during World War II. 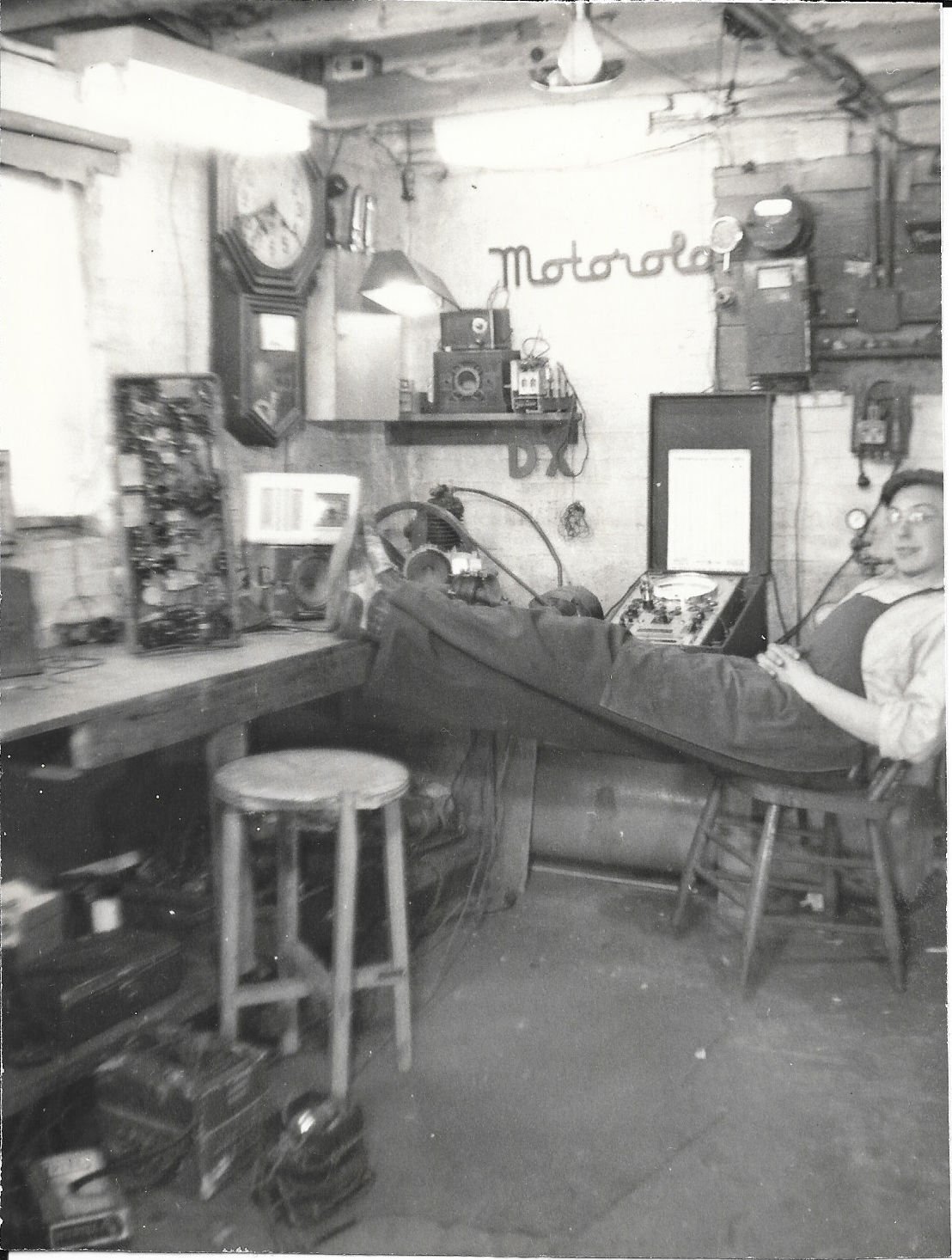 A young Henry Setton poses for a photo in the “Radio Shack” he built in the basement of this parent’s Chicago home during the 1940’s. Setton’s love electronics carried him into the Navy and beyond.

Henry Setton, of Moline, is shooting for 100.

The World War II Navy veteran only has three years to go until he hits the coveted century mark.

Anyone who meets the jovial Setton will quickly realize that he possesses a boatload of stories from his 97 years of life, and he is always willing to share.

Like so many men of his generation, his World War II story starts with the draft.

“Back in the old days, long before you were born, they had what is known as ‘Uncle Sam Wants You.’ And about the time you graduated high school — zip, they were right at your door to induct you into the service,” Setton recalled.

He grew up on the southwest side of Chicago, in the stockyards district where his great-grandparents had migrated to for work in the meatpacking industry.

It was in that close-knit South Side neighborhood that he met his future wife June and discovered a passion for ham radio. That hobby would end up helping guide the course of his life, both in and out of the military.

While relaxing in his fourth-floor apartment overlooking the west end of Moline, Setton reminisced about the little “radio shack” he built in his parent’s basement.

For as long as he could remember, Setton has been interested in electronics. He obtained his radio operator’s license while in high school.

“I built my own station. I built my own receiver. It was my hobby. So I was into electronics before I got into the service,” Setton said.

“I loved it. I spent all night doing it,” he said.

“I got into the service at a time when the British had developed a vacuum tube, which would allow them to put (radar) in an airplane. Before that our first antenna aboard ship was as big as a bed spring. It was 8 feet by 4 feet (mounted atop the ship and rotated). Then it came down to a little gadget about a size of a ball,” said Setton.

After being drafted he was sent to Great Lakes Naval Base in Illinois for basic training, followed by 10 months of electronic and radar training spread between Houston, Texas, and San Francisco, California. Up till then, he's never ventured farther from the South Side than short trips to Indiana and Michigan.

His last stop before being assigned to the USS Quincy (CA-71) was to learn how to operate the physical equipment that he would be operating and maintaining in the Navy.

"We’d work on the actual transmitters that we had aboard ship, with the actual radar that we were going to maintain and repair,” said Setton.

His time aboard the USS Quincy involved two defining moments of history.

The first was transporting President Franklin D. Roosevelt and his entourage in January of 1945 from Newport News, Virginia, to Malta and then Yalta.

In Malta the president met with British Prime Minister Winston Churchill and other dignitaries while onboard the Quincy. Roosevelt then continued to the Crimea by plane to attend the Yalta Conference, where he and other world leaders discussed the postwar reorganization of Europe.

Roosevelt reboarded the Quincy in February 1945 for another series of important meetings, including one with King Abdul Aziz of Saudi Arabia that resulted in a secret agreement that gave birth to the U.S. providing military assistance in exchange for oil.

The second defining moment of history was the days and weeks leading up to the United States dropping atomic bombs on both Hiroshima and Nagasaki. During that time the Quincy was heavily involved in the military strikes on Japan.

When asked about his most vivid memory he didn’t hesitate before answering.

“Whenever there was an emergency, or when we were about to be attacked, or attack someone, a bugler would blow into a microphone and everybody on the ship would get the message. You’d have to run to general quarters. And my general quarters was an interesting place. I was in charge for a while of the emergency radio. And that’s where I spent a lot of my time whenever there was an emergency.

While cannons were firing above and kamikaze pilots were aiming for the USS Quincy, Setton was sealed in a small square room, with the radio equipment, a few other sailors, all surrounded by steel beams and pipes. They could hear the battle but they never saw what was going on.

“We were told not to be too active. During an emergency, everything is shut down on the ship because they could be lofting gases at you. And those gases would asphyxiate everybody on the ship. So all the air ventilation was shut off. We only had the air which was in a room, and it was hot. We were instructed to just sit and not destroy what little available oxygen,” said Setton.

“I was probably 25 feet below the waterline. It was a place where a bomb on the outside couldn’t reach. It was the safest place (on the ship)," said Setton.

Thankfully for all the sailors onboard the USS Quincy, the ship never sustained enough damage to warrant the captain having to leave the bridge and take refuge in the emergency radio room.

“I was never really scared. Not that I can remember. I had my job to do and I did it. And that’s how we were trained,” he said.

In the Navy you follow orders, even when they don’t seem to make sense at the time. He remembers that they were told to cease bombardment and sail as fast as they could away from Japan.

It wasn’t until later, when they heard the Japanese propagandist Toyko Rose announce the dropping of the atomic bomb on Hiroshima. Then the ship’s orders transmitted from Pearl Harbor made sense.

When asked what he thought when he learned about the bombs, he repeated the mantra of so many soldiers — “We had nothing to say about it. I was interested in maintaining the equipment. I had my job to do and I did it.”

He built on that job after the war.

Setton began in the little radio shack in his parent’s basement, went to the emergency radio room, and then to a radio store in Chicago that he ran with his wife.

From there he went on to study engineering at the Illinois Institute of Technology, graduating in 1950. He later worked for IBM as an electrical engineer. In 1952 he joined the faculty of DeVry Tech as an instructor, and in 1955 he became a professor of engineering at the University of Illinois Chicago. He retired in 1983 but served as an adjunct professor at Triton College, 1984-2005.

He lost his wife June four years ago. He lives at Moline's Overlook Village and his family all reside in the Quad-Cities area, making it the perfect place for him to gently sail to the century mark.

Fired up: Applications for gun permits in the Quad-Cities increased during the pandemic

Gun sales have increased across the country and in the Quad Cities during the COVID-19 pandemic.

Court injunctions are part of the gamesmanship of strike negotiations, experts say.

'Work smarter, not harder': How Davenport plans to use a $700K federal grant to address gun crime

When it comes to reducing a gun crime rate that reached an all-time high in 2020, Davenport city and police officials say the motto is "work s…

World War II veteran Henry Setton, of Moline, poses for a portrait with a photograph of the USS Quincy (CA-71), the ship he served on during the war.

Henry Setton onboard the USS Quincy during World War II.

A young Henry Setton poses for a photo in the “Radio Shack” he built in the basement of this parent’s Chicago home during the 1940’s. Setton’s love electronics carried him into the Navy and beyond.