Hospitalizations in US start to decline after persistent climb; WHO blasts vaccine profits, inequalities 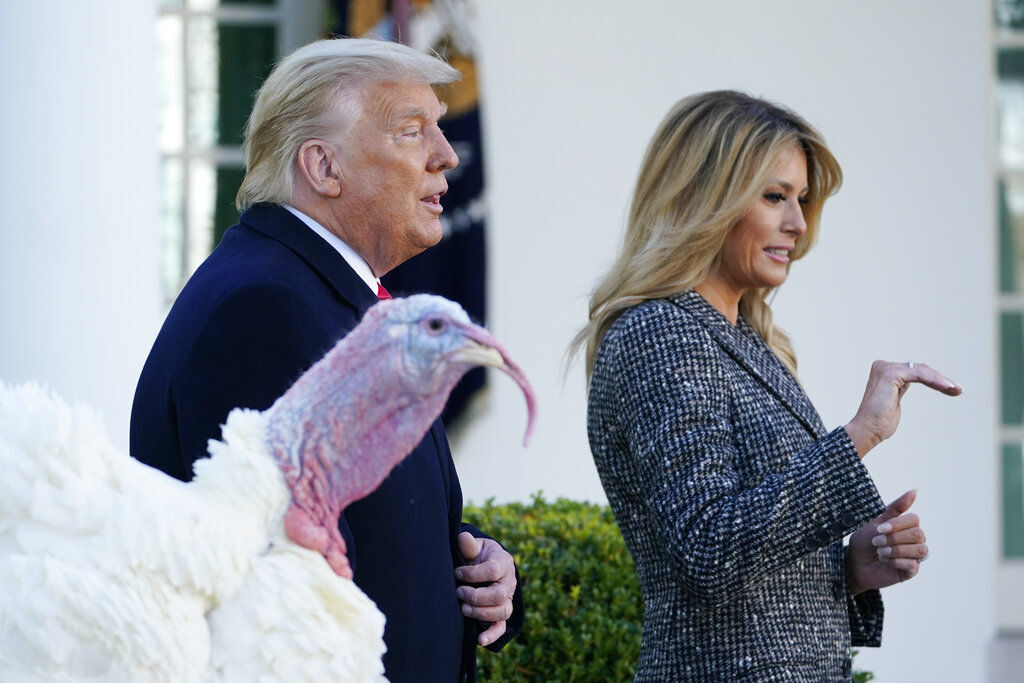 President Donald Trump walks away after pardoning Corn, the national Thanksgiving turkey, in the Rose Garden of the White House, Tuesday, Nov. 24, 2020, in Washington, with first lady Melania Trump watches. 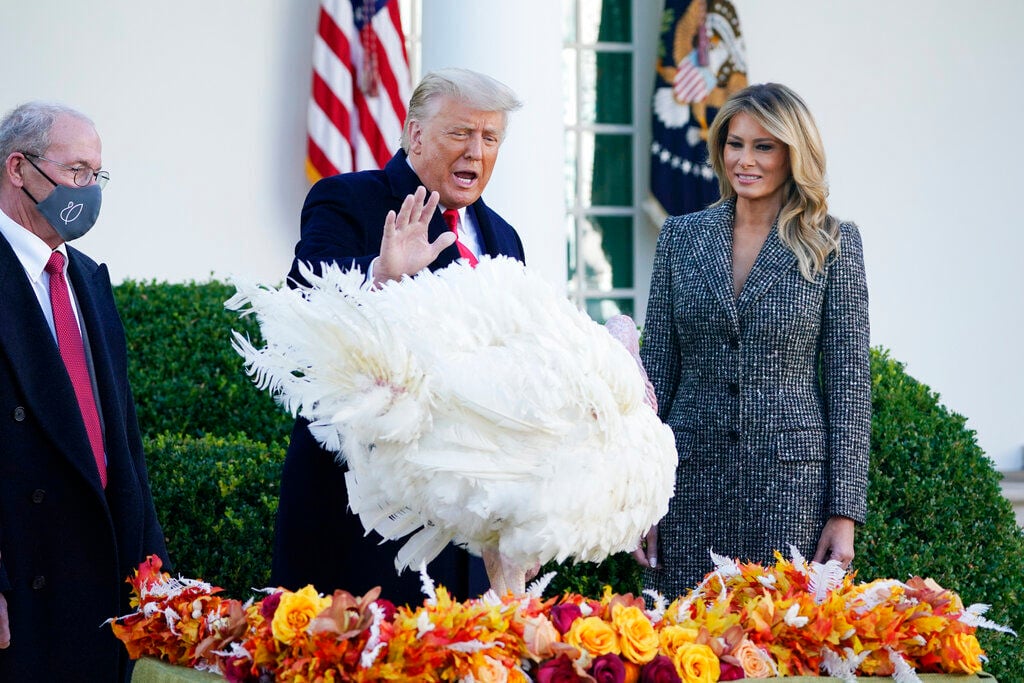 President Donald Trump on Tuesday in an annual Thanksgiving tradition, offered a "full pardon" to one of two "magnificent gobblers" from a "presidential flock" of 30 turkeys raised by Walcott turkey producers Ron and Susie Kardel.

The National Turkey Federation presented the two birds, named Corn and Cob in honor of their home state.

Trump, in a Rose Garden ceremony, selected Corn as the "lucky bird" to be named the National Thanksgiving Turkey.

"Like so many presidential flocks, this one started in the great state of Iowa," Trump said according to video of the ceremony. "In what can only be described as an act of blatant pandering — and, by the way, I love the state of Iowa — these two turkeys sought to win the support of Iowans across the state by naming themselves Corn and Cob."

Trump carried the state by nearly 10 percentage points in 2016 and by eight points over President-elect Joe Biden in the Nov. 3 election.

Both birds will live out "a very long, happy and memorable life" at the "tremendous" Iowa State University, Trump said, where animal science students, faculty and College of Veterinary Medicine students will contribute to their care. The turkeys will also be available for public viewing starting at 10 a.m. Dec. 5.

The Walcott family is the eighth from Iowa to raise turkeys for the annual pardoning.

A sixth-generation turkey and row crop farmer from Walcott, Ron Kardel serves as the current chairman of the National Turkey Federation and is responsible for supplying a turkey for the annual National Thanksgiving Turkey Presentation.

The first Presidential Turkey Proclamation event was held in 1947, when President Harry Truman received a live turkey from the National Turkey Federation, according to the Iowa Department of Agriculture. And "pardoning” as a custom began with President George H.W. Bush in 1989. However, the tradition of "pardoning" a turkey has been traced to President Abraham Lincoln's 1863 clemency to a turkey recorded in an 1865 dispatch by a White House reporter, who noted, "a live turkey had been brought home for the Christmas dinner, but [Lincoln’s son Tad] interceded in behalf of its life. . . . [Tad’s] plea was admitted and the turkey’s life spared," according to the White House Historical Association.

Trump drew a comparison of the pilgrims landing at Plymouth Rock, "who endured a bitter and dangerous winter," to the ongoing COVID-19 pandemic, and touted news of a vaccine the Centers for Disease Control and Prevention said could be released “by the end of the second week of December.”

"From our earliest days, America has always been a story of perseverance and triumph, determination and strength, loyalty and faith," Trump said. "This week, in a time that is very unusual but in so many ways, very, very good -- what we've endured and been able to endure, with the vaccines now coming out one after another. It's an incredible thing that happened. One of the greatest medical achievements that this planet has ever seen."

The president continued: "During this Thanksgiving, we extend our eternal gratitude to the doctors, nurses, health care workers, and scientists who have waged the battle against the 'China' virus, and we give thanks for the vaccines and therapies that will soon end the pandemic. It's just -- just such a tremendous feeling to know that they're coming, and they'll be coming probably starting next week, or shortly thereafter."

Trump also made a veiled dig at his former Defense Secretary James Mattis, who said the incoming Biden-Harris administration should do away with Trump's "America First" policies.

"We send our love to every member of the armed forces and the law enforcement heroes risking their lives to keep America safe, to keep America great, and, as I say, “America first.” Shouldn't go away from that: America first," Trump told a masked and socially distanced crowd gathered in the Rose Garden.

Trump used last year’s pardon to make jokes about the impeachment process. The House would go on to approve two articles of impeachment the next month and the Senate would subsequently vote to acquit him.

In 2018, Trump’s joked about one of the turkeys contesting the pardon election. The scenario he described bears a striking resemblance to the one he faces today.

“This was a fair election,” the president joked. “Unfortunately, Carrots refused to concede and demanded a recount, and we’re still fighting with Carrots. But I will tell you, we’ve come to a conclusion. Carrots. I’m sorry to tell you, the result did not change. That’s too bad for Carrots.”

-- The Associated Press contributed to this story

A Rock Island man is accused by Bettendorf police of engaging in "combat" over the weekend in a Bettendorf bar.

Helen Mae Lowery, 97, was what is commonly referred to as a kind, old soul.

From the National Weather Service at 6 a.m.:

Judging by concert cancellations or programs "on pause," one might conclude the COVID-19 pandemic has been devastating to the River Music Expe…

Last week, Millage said President Donald Trump should be impeached after attendees of the president's "Save America" rally forced their way into the U.S. Capitol on Wednesday.

Looking to eat healthy? Here's a guide to the most popular eating plans

President Donald Trump walks away after pardoning Corn, the national Thanksgiving turkey, in the Rose Garden of the White House, Tuesday, Nov. 24, 2020, in Washington, with first lady Melania Trump watches.