PHOENIX (AP) — On the floor of Veterans Memorial Coliseum, where Sir Charles Barkley once dunked basketballs and Hulk Hogan wrestled King Kong Bundy, 46 tables are arrayed in neat rows, each with a Lazy Susan in the middle.

Seated at the tables are several dozen people, mostly Republicans, who spend hours watching ballots spin by, photographing them or inspecting them closely. They are counting them and checking to see if there is any sign they were flown in surreptitiously from South Korea. A few weeks ago they were holding them up to ultraviolet lights, looking for a watermark rumored to be a sign of fraud.

This is Arizona's extraordinary, partisan audit of the 2020 election results in the state's most populous county — ground zero for former President Donald Trump and a legion of his supporters who have refused to accept his loss in Arizona or in other battleground states. Theses ballots have been counted before and certified by the Republican governor. Much of the country has moved on.

And yet, in this aging arena, Republicans are searching for evidence to support claims they already believe.

The effort has alarmed voting rights advocates, election administrators and civil rights lawyers at the U.S. Department of Justice, who this past week demanded confirmation that federal security and anti-intimidation laws are being followed. Senate President Karen Fann responded Friday by telling the department it had nothing to worry about.

"They lost, and they can't get over it," said Grant Woods, a former Republican Arizona attorney general who became a Democrat during Trump's presidency. "And they don't want to get over it because they want to continue to sow doubt about the election."

The 2.1 million ballots were already counted by Maricopa County election officials in November, validated in a partial hand recount and certified by Gov. Doug Ducey. Two extra audits confirmed no issues. No evidence of fraud sufficient to invalidate Joe Biden's narrow victory in Arizona and Maricopa County has been found.

Still, counters are being paid $15 an hour to scrutinize each ballot, examining folds and taking close-up photos looking for machine-marked ballots and bamboo fibers in the paper. The reason appears to be to test a conspiracy theory that a plane from South Korea delivered counterfeit ballots to the Phoenix airport shortly after the election.

When the recount started, the ballots were viewed under ultraviolet light to check for watermarks. A theory popular with QAnon followers has it that Trump secretly watermarked mail ballots to catch cheating.

There are no watermarks on ballots in Maricopa County. The effort has since been abandoned.

Despite their obvious partisan biases, the auditors insist they can be trusted because they're running an independent and transparent operation. Yet they're recruiting from right-wing groups. They tried to block media access. They fought in court to not disclose written procedures they're using to count votes and keep ballots secure. They lost.

And it's entirely unclear who is paying for it and how much it's costing. Taxpayers, through the Senate's operating budget, chipped in $150,000, but the CEO of the small company leading the audit has acknowledged that won't cover costs.

Fundraisers, one from the conservative One America News Network and another tied to Patrick Byrne, a former CEO who promoted election conspiracies, are raising hundreds of thousands more.

Critics call the undisclosed private funding a huge red flag — the audit could be funded by foreign governments or people with a stake in the outcome like ardent Trump supporters.

Ken Bennett, a former Republican secretary of state who is serving as the Senate's liaison to the auditors, dismissed mounting criticism.

"I think Republicans can count votes on ballots as well as Democrats or Libertarians or independents," Bennett said.

The audit has its own Twitter account and it has taken on a Trumpian air, deploying hyperbole and sharp attacks on Democrats and journalists.

"THE GREATEST AUDIT IN THE GALAXY CONTINUES!!" the account tweeted on May 4.

All of it is made possible by the GOP-controlled state Senate, which issued an unprecedented subpoena demanding access to all ballots and the machines that counted them in Maricopa County, home to the Phoenix area and 60% of Arizona voters.

After months of court battles with the GOP-controlled county Board of Supervisors, which maintains the election was well-run, the Senate got hold of the ballots. That came despite repeated audits and a hand-count of a sample of ballots that showed the results were accurate.

Fann, the Republican Senate president, insisted again Saturday that the audit has nothing to do with Trump and everything to do with the large segment of GOP voters who he convinced that he actually won, despite the lack of evidence.

The ballots were handed over to Cyber Ninjas, a tiny cybersecurity firm whose president, Doug Logan, is a Trump supporter who has shared outlandish conspiracy theories about the election.

That concern continues to the counters themselves. Anthony Kern, a former Republican state lawmaker who was photographed in restricted areas outside the U.S. Capitol during the Jan. 6 insurrection, has been spotted several times tallying the votes.

The audit is recounting only the presidential race and the U.S. Senate contest, two contests won by Democrats. Down-ballot races, where Republicans fared better, are not being reviewed.

The operation has been slowed by mistakes and operational problems. On the first day, a reporter noticed counters using blue pens, which are banned in ballot counting rooms because they can be read by machines. That prompted a court order requiring only red or green pens.

Staffing has been an issue as well. Despite promises that an army of counters is imminent, only about a third of the 46 counting tables are being used.

On Thursday afternoon, just 16 counting tables and 12 photography tables were in use, split into red, blue, green and yellow color-coded teams.

The fastest tables spent about 6 seconds per ballot. One particularly slow green table spent 20 seconds or more on each one. So much time passes between batches of ballots that, at any given time, half or more of the counters were not doing anything.

The Senate leased the Coliseum for four weeks as part of an audit that was supposed to take "about 60 days." But with one week left before the auditors have to vacate the arena for a series of high school graduations, only about 10% of the ballots have been counted.

Bennett said the count may continue into July.

A 13-year-old girl was hit in the face by a seagull while riding an amusement park ride in New Jersey. Here's video courtesy of the Press of Atlantic City.

Here's what to know about COVID-19 "breakthrough" cases. Should Americans be concerned? What are health experts watching for?

A new poll underscores challenges facing health officials amid soaring infections in some states: 45% of unvaccinated Americans say they definitely won't get shots. Plus, get the latest data and updates on a persisting pandemic.

New mystery: Ransomware victim got key to unlock networks, but from where?

The company Kaseya would not say Thursday how the key was obtained or whether a ransom was paid. A spokeswoman said only that it came from a “trusted third party.” More than 1,000 businesses and public organizations were crippled in the global incident.

The nation's top health agency was expected to backpedal on its masking guidelines and recommend that even vaccinated people wear masks indoors.

US vaccinations rising again as official declares: 'The fourth surge is real.'

Vaccination rates are rising in some states where new COVID-19 cases are soaring. Get the latest on the delta variant, rare "breakthrough" cases, and find answers to 5 key questions about the persisting pandemic.

CDC reverses course on masks in areas where virus is surging; schools included in new guidance

Scientists cited new information about the ability of the delta variant to spread among vaccinated people in announcing new CDC mask recommendations.

Walmart will pay for full college tuition and book costs at some schools for its U.S. workers, the latest effort to sweeten benefits as it seeks to attract and retain talent in a tight job market.

Biden to announce end of US mission in Iraq; typhoon headed for Olympics; Jan. 6 committee to start work

President Biden set to announce end of U.S. mission in Iraq; typhoon headed for Olympics; and Jan. 6 committee begins work. Get caught up. 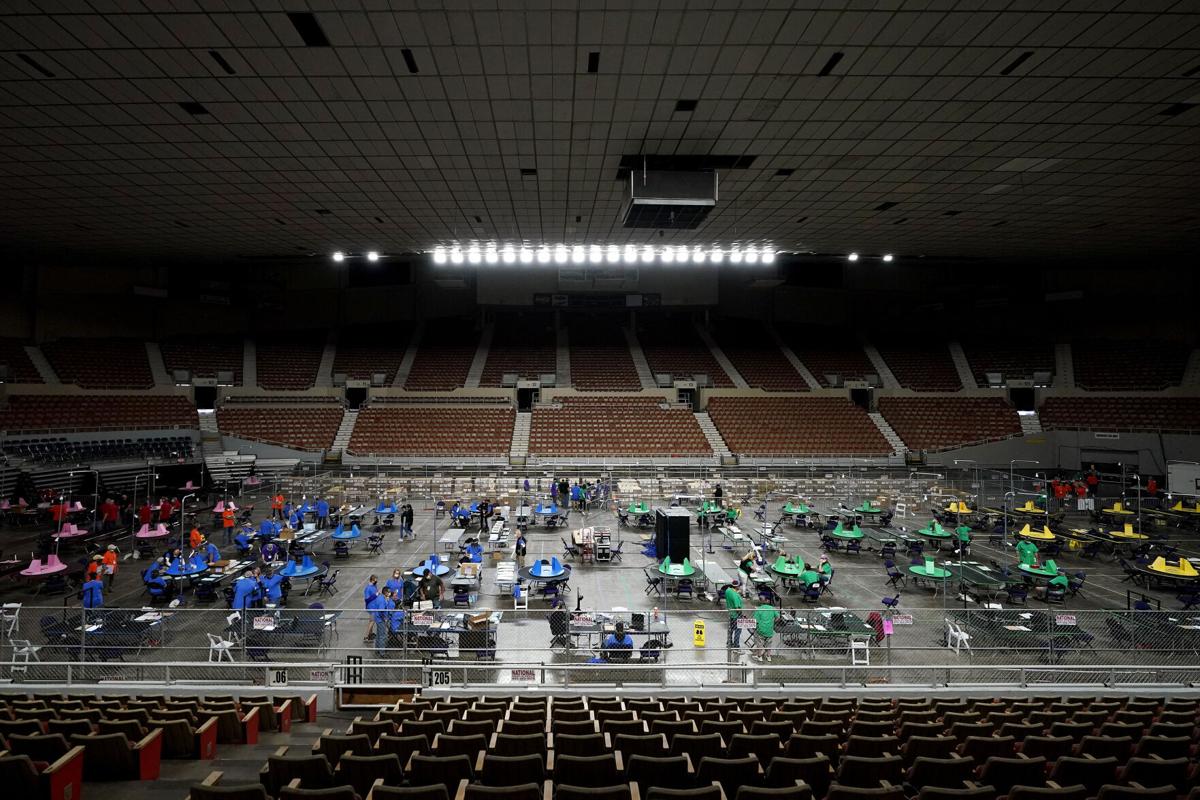 Maricopa County ballots cast in the 2020 general election are examined and recounted by contractors working for Florida-based company, Cyber Ninjas, Thursday, May 6, 2021 at Veterans Memorial Coliseum in Phoenix. The audit, ordered by the Arizona Senate, has the U.S. Department of Justice saying it is concerned about ballot security and potential voter intimidation arising from the unprecedented private recount of the 2020 presidential election results. (AP Photo/Matt York, Pool) 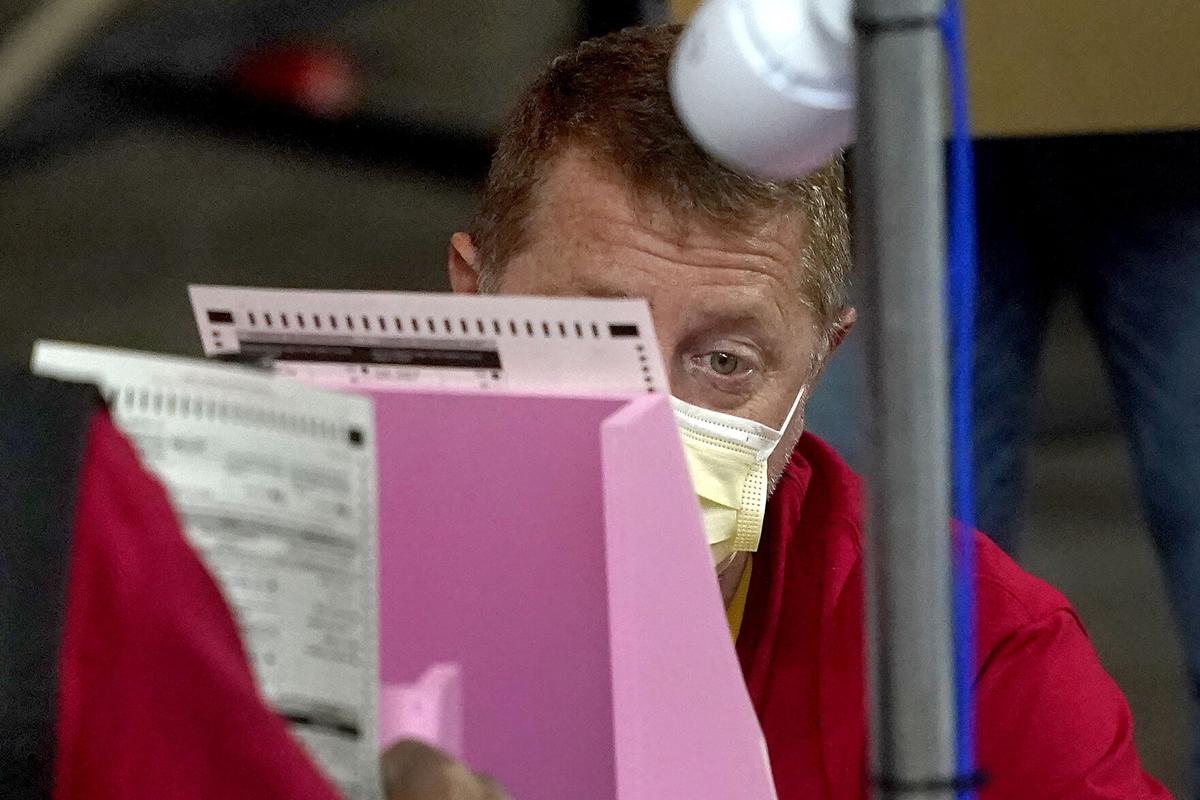 Maricopa County ballots cast in the 2020 general election are examined and recounted by contractors working for Florida-based company, Cyber Ninjas, Thursday, May 6, 2021 at Veterans Memorial Coliseum in Phoenix.