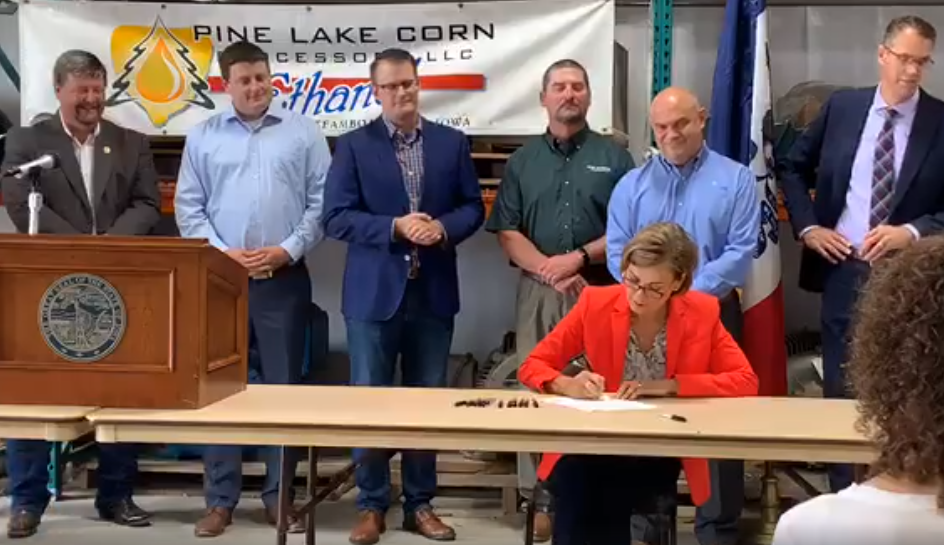 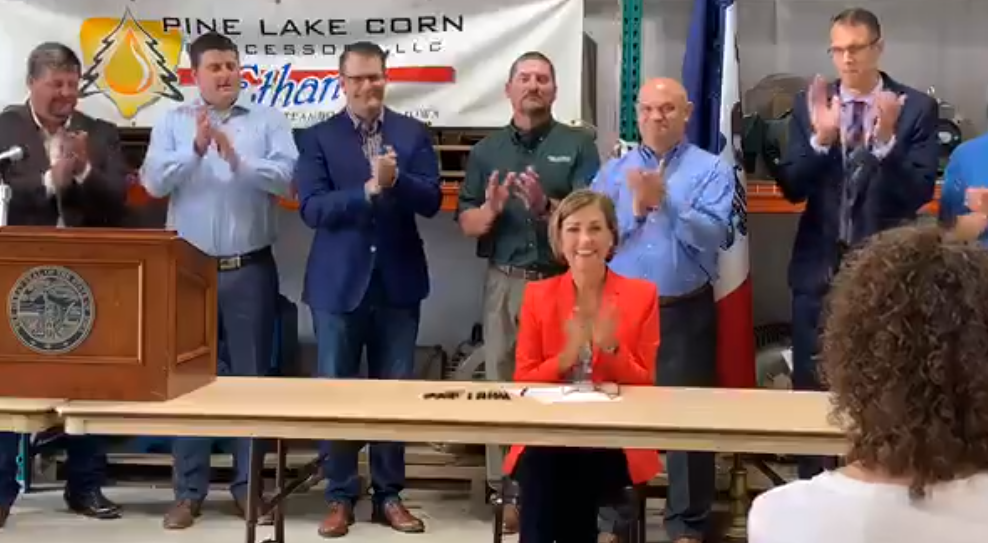 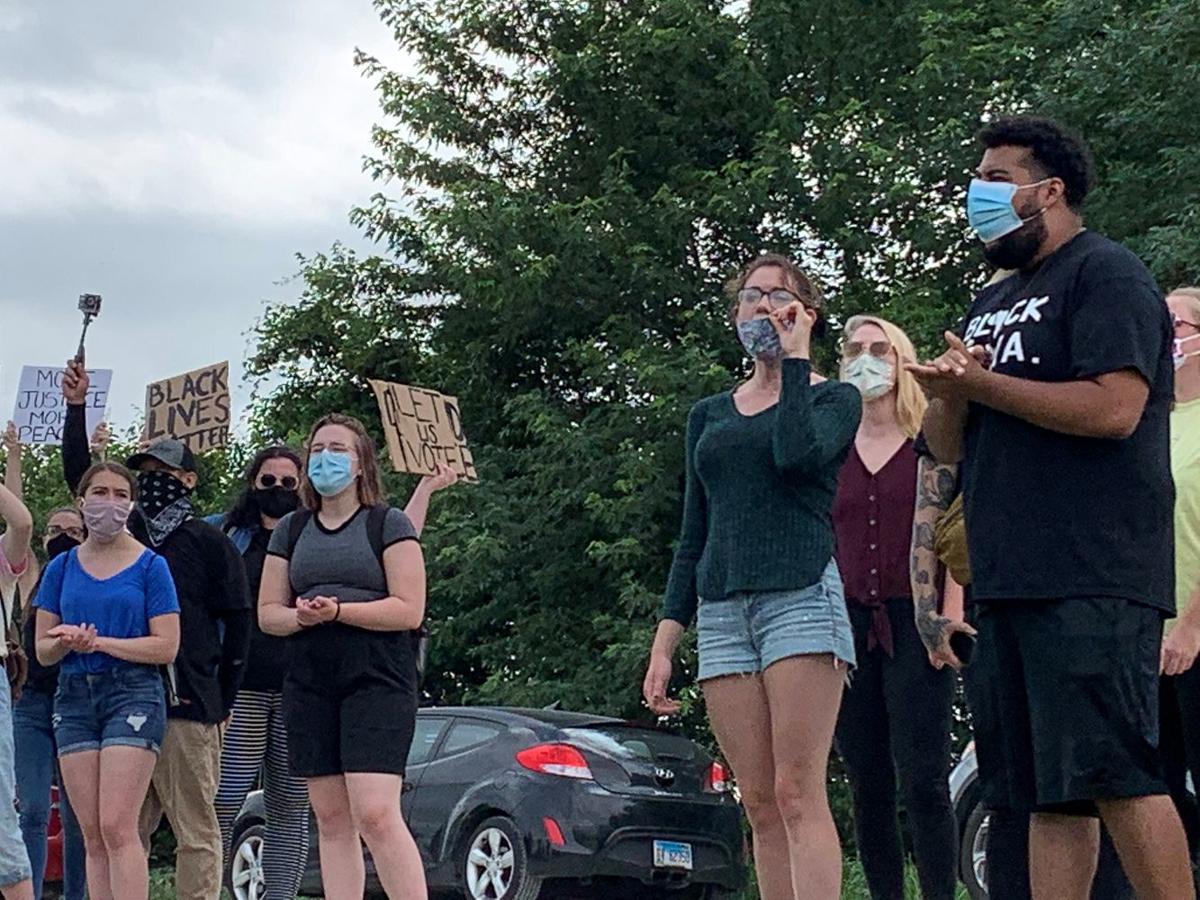 Black Lives Matter activists protest Tuesday at the weekly briefing of Gov. Kim Reynolds at Pine Lake Corn Processing in Steamboat Rock. Activists chanted "Let us vote," protesting that Reynolds hasn't yet fulfilled a promise to sign an executive order restoring the ability to vote to those who have served their time for felonies.

STEAMBOAT ROCK, Iowa — Flanked by area legislators and her lieutenant governor, Gov. Kim Reynolds signed into law a bill that lowers excise taxes on gasoline blended with ethanol, and called out the head of the Environmental Protection Agency charged with approving refinery waivers that limit ethanol's reach.

As she signed the bill at Pine Lake Corn Processors in Steamboat Rock, an ethanol plant that produces around 80 million gallons of ethanol per year, Reynolds said the bill was an important way to circumvent "the bureaucrats in Washington, D.C., that seem more interested in the interests of Big Oil than farmers."

The bill, Senate File 2403, puts the excise tax for gas without ethanol at 30 cents per gallon, while gas with ethanol blended in will get an excise tax of between 24 and 30 cents depending on how much ethanol is blended in.

"This is going to make higher-blended biofuels even cheaper at the pump," Reynolds said.

Reynolds also called on EPA head Andrew Wheeler to "reject the excessive number of waivers" that oil refineries ask for to avoid blending ethanol into gasoline as required by the Renewable Fuel Standard.

"We're going toe-to-toe with the EPA and Big Oil to do everything we can to protect ethanol," Reynolds said.

James Broghammer, CEO of Pine Lake, said it hasn't been easy on ethanol plants like his, noting some in Iowa have closed down amid a down economy and refinery waivers that cut into their business.

"I'm sure you've heard ethanol is not in a very happy state, but we're still here and we're still running," he said.

Around 25% of all ethanol production in the United States comes from around 40 plants in Iowa, Broghammer said, amounting to 4.1 billion gallons in 2019. Seventy-five percent of Pine Lake's expenses were paying Iowa corn farmers, he added.

"If you want to talk about an industry that supports Iowa, supports the United States, it's ethanol," Broghammer said.

"It is the crux of our agricultural economy in Iowa," Feenstra said.

"We really want to help the biofuels industry bounce back," she said.

"We're not seeing what's happening in Texas and Arizona and Florida," she said.

She also announced a change in the way the Iowa Department of Public Health would be tracking recoveries: Instead of confirming a recovered person via phone call — Reynolds noted "a lot of follow-up calls go unanswered" — the state would now classify cases as "recovered" when 28 days had passed from the time of a positive test.

That immediately meant that, instead of 62% of cases recovered, Iowa now had more than 80% of cases classified as recovered.

"We believe the change more accurately represents the number of recovered," Reynolds said.

Around 20 Black Lives Matter activists protested outside of Pine Lake Corn Processing after Reynolds spoke, chanting "Let us vote," in a bid to pressure Reynolds, who hasn't yet fulfilled a promise to sign an executive order restoring the ability to vote to those who have served their time for felonies.

Reynolds has said she would sign such an order before the November election.

Black Lives Matter activists protest Tuesday at the weekly briefing of Gov. Kim Reynolds at Pine Lake Corn Processing in Steamboat Rock. Activists chanted "Let us vote," protesting that Reynolds hasn't yet fulfilled a promise to sign an executive order restoring the ability to vote to those who have served their time for felonies.