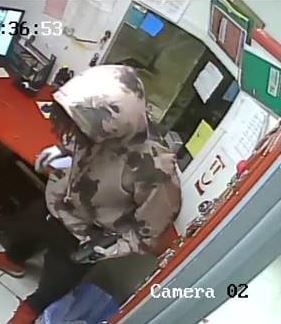 An employee told police the two masked men entered the store armed with pistols and demanded cash, according to a news release from Moline Police. The two escaped on foot with an undisclosed amount of cash.

Police said one suspect was described as a Black man in his teens or early 20s, between 5-feet, 8-inches and 5-feet, 10-inches tall, with a slim build and what appeared to be braided black hair. He was wearing a white hooded sweat shirt with a gray camo pattern, long black pants,  and red ankle high athletic shoes and white or light colored gloves. His face was covered by a light blue surgical style mask. He was armed with a black pistol.

Police describe the second suspect as a Black man in his teens or early 20s, also about 5-feet, 8-inches and 5-feet, 10-inches tall, with a slim build. He was said to be wearing a black hooded sweat shirt, with a white or light colored shirt under it, and the shirttail hanging down below the hem of the sweat shirt, long black pants and black shoes. His face was covered by a light blue surgical style mask, and he was wearing medium blue surgical gloves. He had a black backpack on and was also armed with a black pistol.

Approximately one hour prior, Davenport Police investigated a robbery shortly before 9:30 p.m. Saturday at Pizza Hut on Locust Street. Moline Police say they have not made an arrest in connection with the Papa John's robbery and could not confirm if the two incidents were related.

Moline Police Department ask anyone with information to call the Special Investigations Group at 309-524-2131 or Crime Stoppers of the Quad Cities at 309-762-9500 or use the free mobile app P3 Tips.

MMA star Pat Miletich has been fired by Legacy Fighting Alliance (LFA) for being at the riot on the U.S. Capitol on Jan. 6, according to ESPN.

An Orlando, Florida, server used a sign to secretly communicate with a boy, and police are crediting her with saving him from his abusive parents.

DES MOINES — Republican President Donald Trump’s term in office officially ends Wednesday, exactly two weeks after he sparked a siege on the U…

It will be up to the rank-and-file to determine if Iowa Republicans are moving on from Donald Trump, GOP Chairman Jeff Kaufmann said Saturday.

GOP congresswoman to introduce articles of impeachment against Biden

U.S. Rep. Marjorie Taylor Greene, R-Georgia, told Newsmax on Wednesday that she plans to introduce a measure to impeach Biden on his first full day in office next week.

DES MOINES — Cindy Axne, the lone Democrat in Iowa’s Congressional delegation, cast the lone vote from the state in favor of impeaching Republ…

Helen Mae Lowery, 97, was what is commonly referred to as a kind, old soul.

DES MOINES — With reports of armed protests possible, steps are being taken to ensure the Iowa State Capitol remains a safe place in the comin…