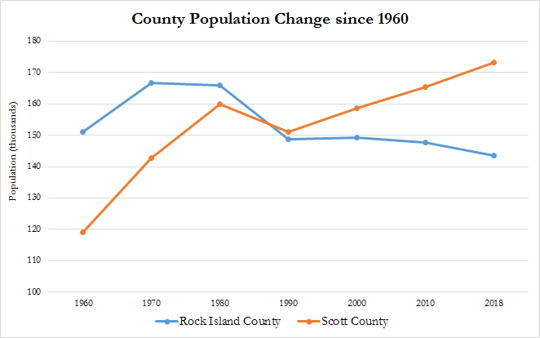 It's probably human nature that we become most alarmed at the changes in our lives, and in our communities, that are most dramatic.

The sudden loss of a job. A big increase in taxes.

The things that happen slowly and over time often just become part of our everyday lives. They're the things we are most likely to accept as immutable.

We sometimes wonder if that's the case with population loss in the Quad-Cities.

Most Quad-Citians know this place grows slowly, if at all. But for the last 30 years, as is amply demonstrated in the chart accompanying this editorial, the populations of Scott and Rock Island counties have dramatically diverged.

The two counties contained nearly the same number of people in 1990. But since then, Scott County has gained roughly 21,000 people, while Rock Island County has shrunk by about 4,000.

Those of us who have lived here a long time know this; it's been a slow-rolling phenomenon. In some ways, it's just become an accepted fact of life in the Quad-Cities.

But it shouldn't be.

Rock Island County’s shrinking population is a big problem. It has been for a long time, and it continues to be.

A diminished population means fewer people to share the fixed costs of government, fewer people to lure commerce, fewer workers to provide a base of employees for new companies and those existing operations that want to expand.

More insidiously, a dwindling population convinces our children that their futures lie elsewhere.

This isn't just a headache for Rock Island County. It also is a problem for Scott County. The Quad-Cities is one economic unit. That is how most economic development prospects often see us; it's how we're marketed. It's also how we see ourselves.

We would note, too, that while Scott County is growing, it is slow. In fact, in some years more people move out of the county than into it, and the only way we keep pace is by what demographers call "natural increase," or having more births than deaths.

We're also not exactly keeping up with some of our larger Iowa neighbors.

Since the 1990s, metros like the Cedar Rapids and Des Moines areas have easily outgrown us. Since 1990, Linn County has added about 55,000 people; Polk County's population has surged by more than 150,000 people.

We got a fresh reminder of some of these trends in a series of articles over the past week by Dispatch-Argus reporter Graham Ambrose.

Ambrose documented how automation has affected the manufacturing industry, long a staple of our economy; how our population is aging as birth rates have fallen; perhaps worst of all, people have chosen simply to migrate elsewhere in the U.S.

From 2010 to 2018, Scott County has struggled to remain even. But Rock Island County has seen a net of more than 10,000 people relocate elsewhere in the U.S.

We would note that it's not just a loss of overall population that is troubling. As we have pointed out previously, the number of people in the Quad-Cities who are of prime working age (25 to 54) has dropped — on both sides of the river. (As with overall population, the problem is worse in Rock Island County than in Scott County.)

What can be done about this?

We hope that Illinois Gov. J.B. Pritzker will follow through with his promises to deliver property tax relief in the state, which we believe is a significant contributor to Rock Island County’s woes. The governor launched his property tax task force last week with a charge to return recommendations within 90 days.

If places like Rock Island County are to reverse its population trends, this task force has to be more than just a show piece. Illinois must find a way to ease its property tax burden.

There are other problems, of course. The state's budget and pension woes need to be fixed. Illinois also needs to figure out a way to grow high quality jobs.

That's a challenge the Iowa side of the river faces, too. We also believe our state leaders need to put more emphasis on the challenges that places like Davenport, Waterloo and Clinton face.

We all know about rural Iowa's struggles, but there's less attention paid to smaller and mid-sized metro areas.

Economic development leaders in the Quad-Cities clearly recognize that our dwindling population is a major problem. And we know that this is a problem in much of the Midwest.

Still, these trends are long-standing ones for which we have simply failed to find solutions.

We don't believe these trends are irreversible. Others have found a way to grow.

Is there really an ‘Illinois exodus’? Here's where Illinois and Iowa residents are moving.

Data show that Illinoisians aren’t moving to Iowa. Instead, they’re bailing for a different Midwestern state.