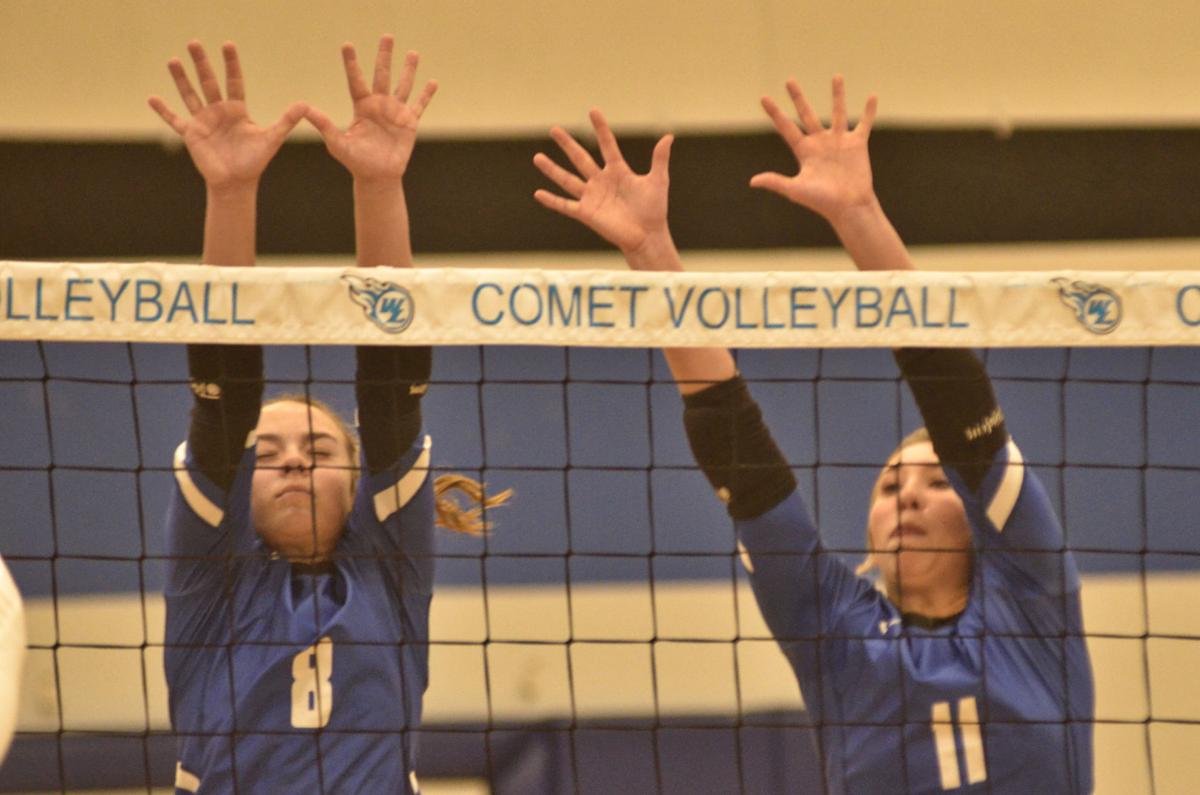 West Liberty's Brooklyn Buysse (8) and Averi Goodale (11) attempt a block an Anamosa return during the first set of their Class 3A Region 8 quarterfinal in West Liberty, Oct. 19, 2020. The Comets won in straight sets. 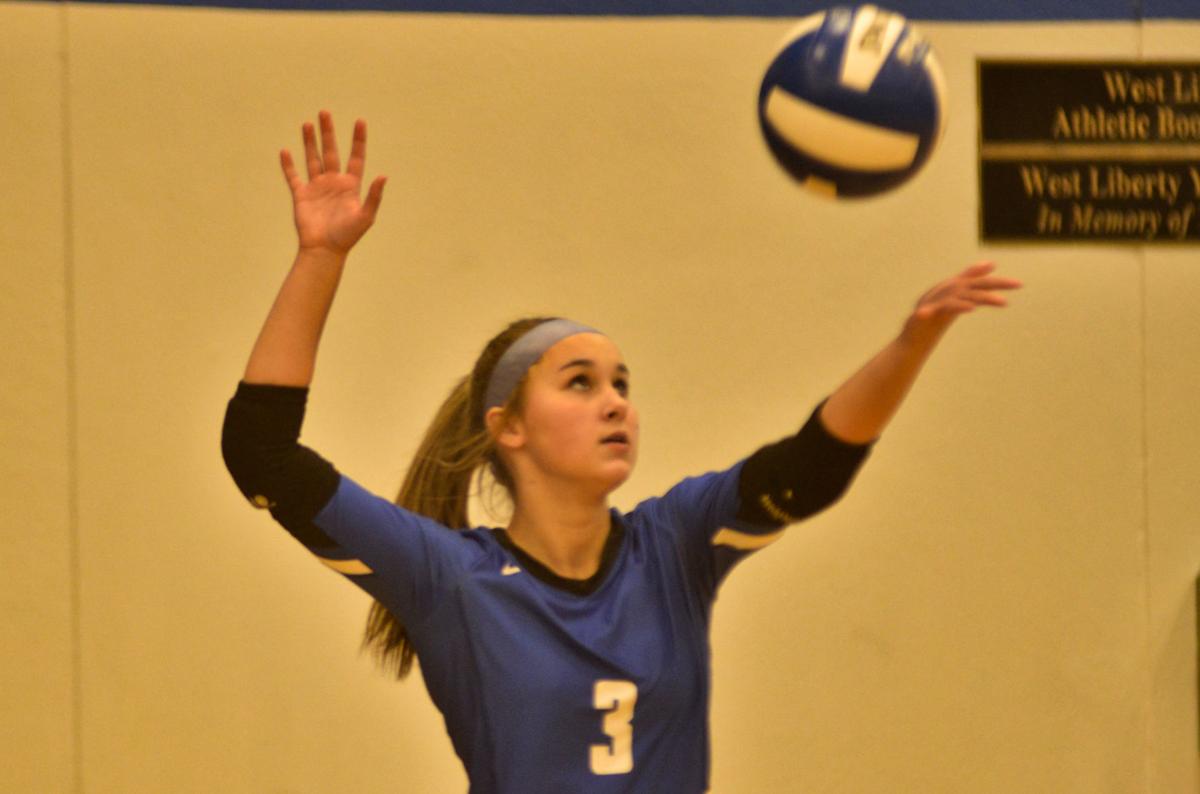 West Liberty's Rylee Goodale serves during the third set of the Comets' Class 3A Region 8 quarterfinal against Anamosa in West Liberty, Oct. 19, 2020. The Comets won in straight sets.

WEST LIBERTY — Although there wasn’t much of a gap in terms of record between the West Liberty Comets and Anamosa Blue Raiders prior to Monday night’s Class 3 Region 8 quarterfinal, the Comets proved there was a sizable gap on the court.

West Liberty, playing on its home floor, took down the Blue Raiders in straight sets, 25-11, 25-19, 25-14. Both teams entered the contest with six losses on the season though the Comets came in with a handful more wins.

"I think we had a really good week of practice, and I think the girls are ready to play," said West Liberty head coach Ruben Galvan, "and I think, having played Anamosa once already, I kind of questioned the mental state we would come in with, but I was happy with how we played."

The Comets won that first meeting in straight sets as well. That one took place in West Liberty on Oct. 8.

But Monday night’s match only really got tense for a few points toward the end of the second set. Otherwise, it was all Comets, all night.

In the middle set, Anamosa scored the first three points, but West Liberty took a 5-4 lead after a block by junior Macy Daufeldt and the Comets never trailed again in the set. Anamosa came within three several times, but Daufeldt and the West Liberty (25-6) hitters always came up with a kill to keep the Blue Raiders (19-7) at a distance.

Daufeldt ended the set with a kill that split the middle of the Anamosa back row, the Comets taking it 25-19.

West Liberty was more consistent than anything against Anamosa. The Comets didn’t go on any huge runs, but would get three or four points often enough while holding serve that the lead rarely shrunk.

One of the bigger rallies for the Comets came when the team scored four straight while sophomore Rylee Goodale was serving. That run expanded the West Liberty lead from 7-6 to 11-6 and the Comets wouldn’t look back.

The Drake-bound Daufeldt led West Liberty with 17 kills, with seniors Martha Pace adding 10 and Averi Goodale six. West Liberty had 38 kills in total and sophomore setter Brooklyn Buysse dished out 29 assists while recording a kill of her own and six digs.

West Liberty’s kills leaders displayed their versatility, as each reached double-digit digs as well, with Daufeldt’s 11 and Pace’s 10. Sophomore Monica Morales would lead the Comets in that category, however, with 14.

Serving also proved to swing in West Liberty’s favor, as the Comets notched five aces to Anamosa two, with both Blue Raider serves coming as the team’s back was against the wall trailing midway through the third set.

"Our offense was really clicking," said Galvan. "We served really well and we served aggressively. The number one thing was they were having fun out there."

On the night, West Liberty only committed one service error and were led by senior Averi Goodale’s three aces.

Averi Goodale’s final kill of the night made it 24-13 in the third set. Anamosa would get one more point before a Blue Raider return would sail out of bounds to give the win to West Liberty, who will be at home on Wednesday, Oct. 21, for the 3A Region 8 semifinals to play Central Lee (22-7).

"Winning the (River Valley Valley Conference) tournament was huge for momentum going forward," Galvan said. "This one (against Anamosa) will get us ready for the next one and we have a tough road ahead of us and we have to keep digging and hopefully we'll come out ahead."

Deep thoughts from Spencer Petras, Keith Duncan reviewing artwork and continued health questions on the Iowa offensive line are are all part o…

Iowa’s 300-pound quarterback, the Hawkeyes’ wildcat and Iowa running fakes were all questions discussed by Hawkeye coordinators on Thursday an…

Kaevon Merriweather’s patience, Keith Duncan trying to get back to par and James Franklin on Iowa’s defense are all part of today’s Hawkeye 10@10.

Quarterback sneaks, quarterback carries and the return of an offensive lineman are all part of today’s Hawkeye 10@10.

Hawkeye 10 @ 10: Piling on and and another milestone

West Liberty's Brooklyn Buysse (8) and Averi Goodale (11) attempt a block an Anamosa return during the first set of their Class 3A Region 8 quarterfinal in West Liberty, Oct. 19, 2020. The Comets won in straight sets.

West Liberty's Rylee Goodale serves during the third set of the Comets' Class 3A Region 8 quarterfinal against Anamosa in West Liberty, Oct. 19, 2020. The Comets won in straight sets.