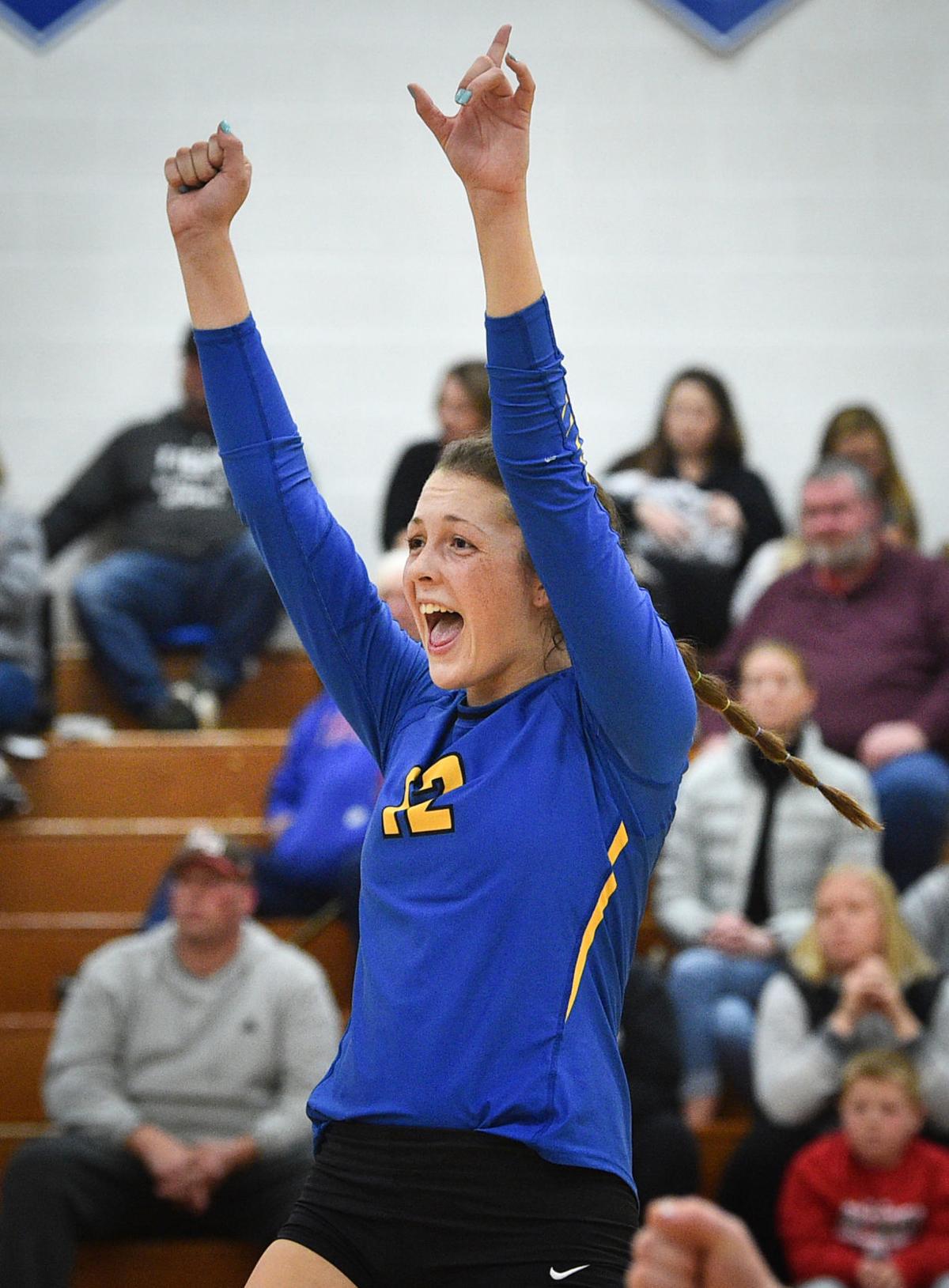 Wilton's Ella Caffery (12) celebrates a point scored against West Branch during the Class 2A regional final at Durant High School. 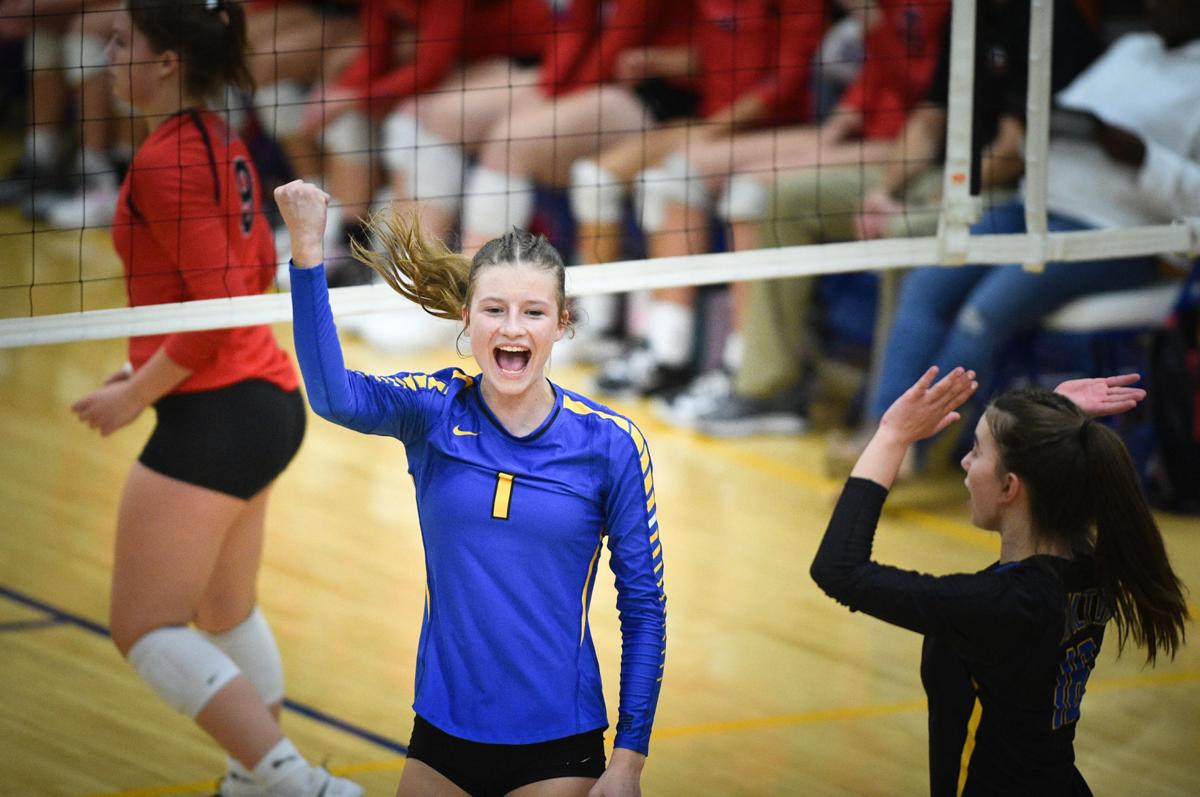 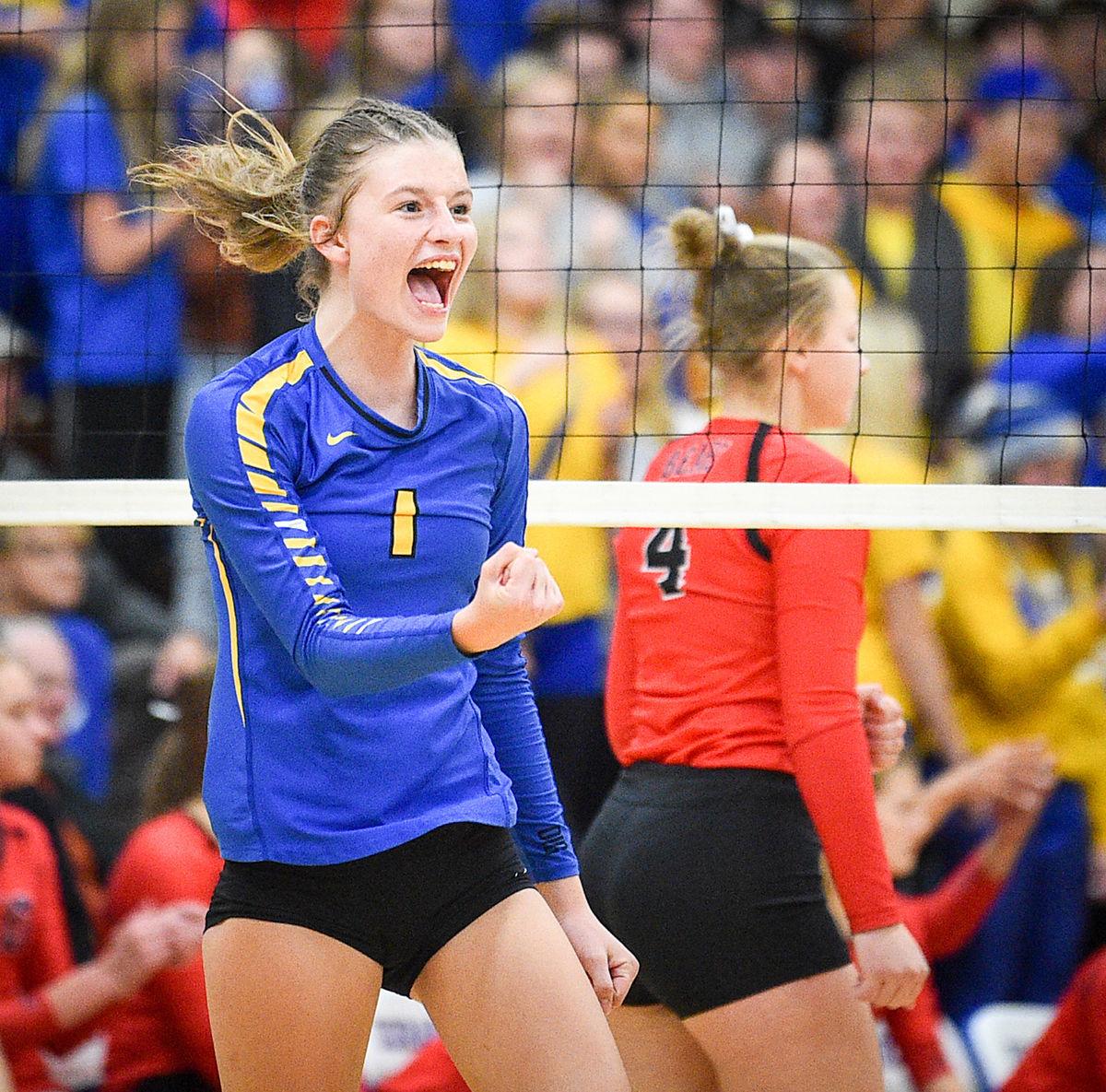 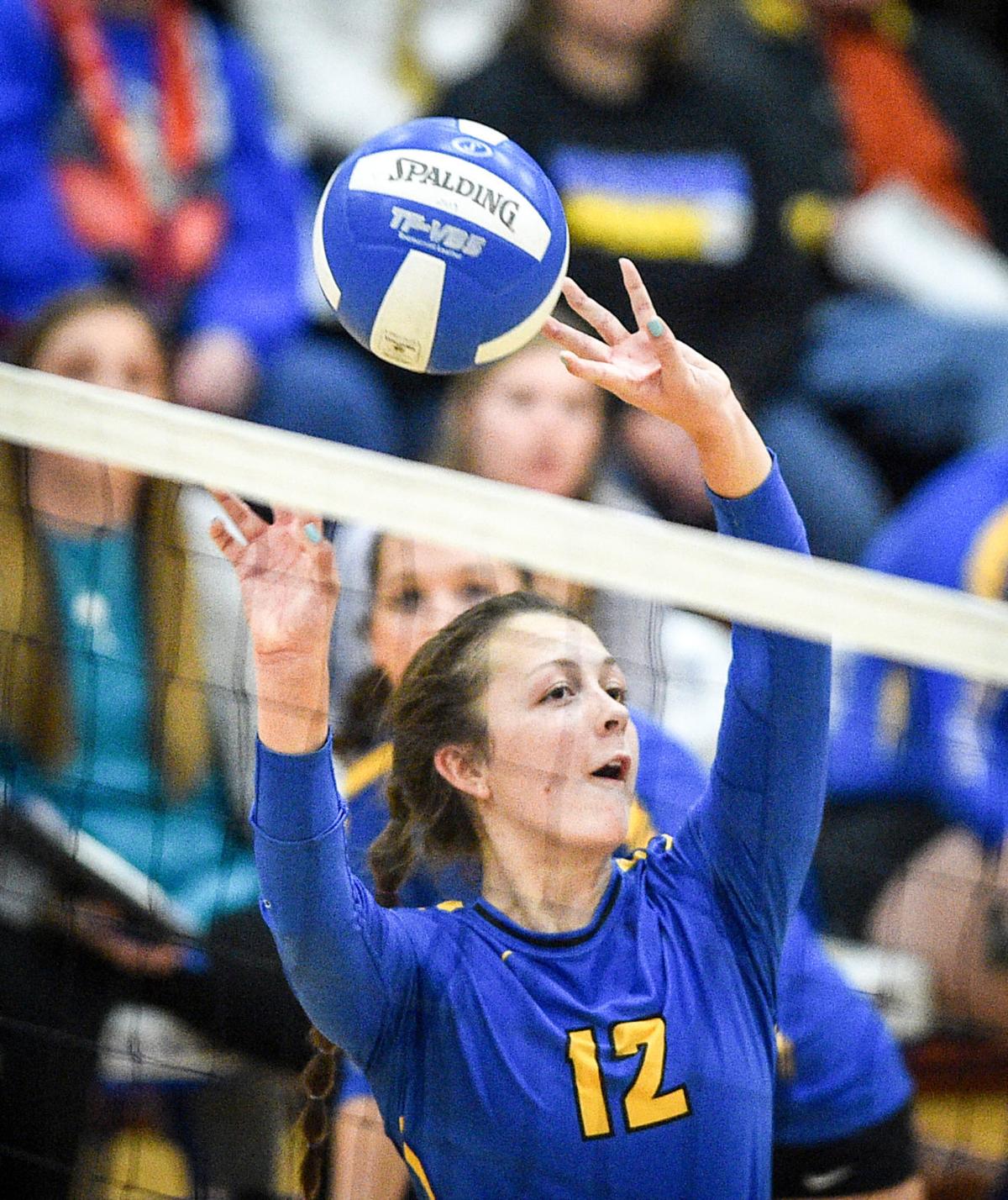 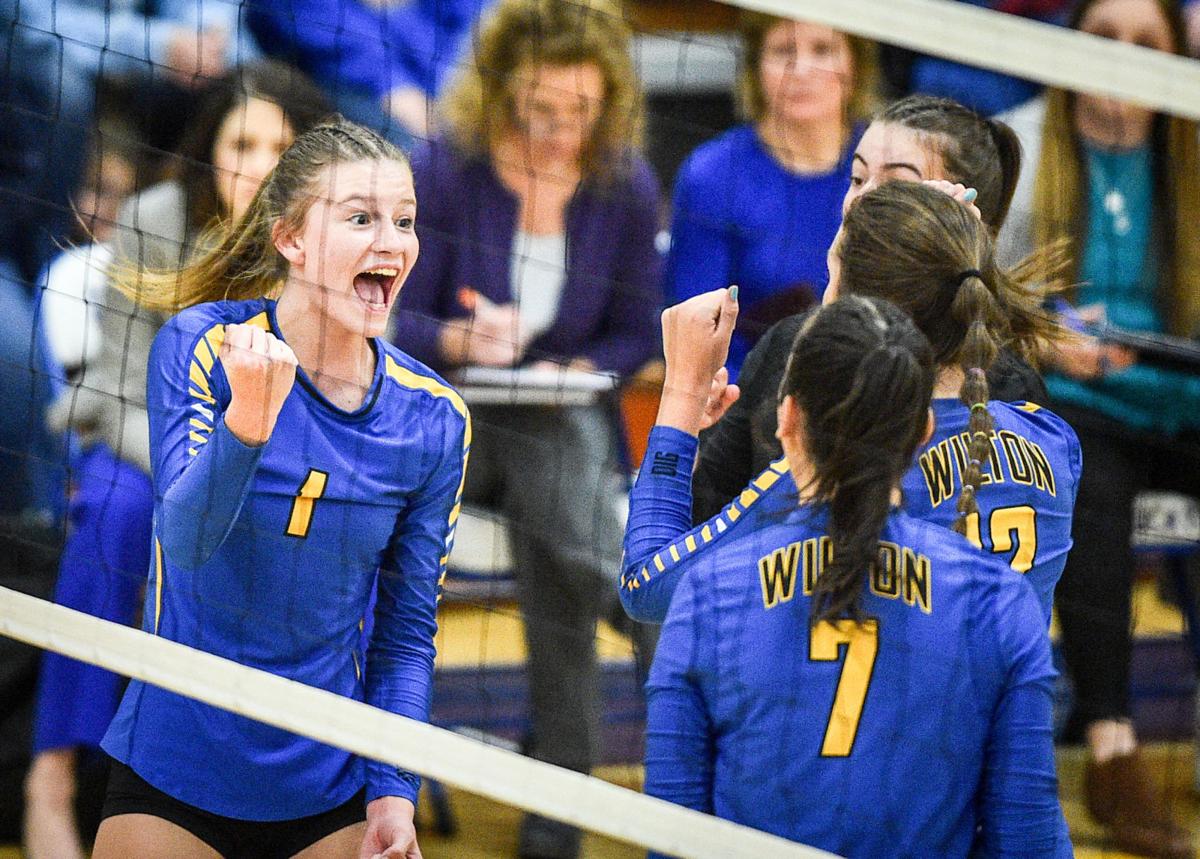 WILTON, Iowa — The Wilton volleyball team made it to state last season, but after losing its top three kill leaders, this season brought about plenty of uncertainty.

Regardless, the team is making a return trip to the U.S. Cellular Center in Cedar Rapids to compete in the Class 2A state tournament for the second consecutive year.

The Beavers enter Wednesday's contest as the No. 3 seed. They enter with almost the same regular-season record as a year ago (35-3 this season compared to 36-5 in 2018). But the makeup of their roster this time is far different than that senior-laden team of yesteryear when they lost in the state quarterfinals.

With only two seniors and one junior on the team, Wilton takes a unique combination of underclassmen with big-game experience with it to Cedar Rapids.

"I am so very proud of this team," Wilton head coach Brenda Grunder said. "As all that experience and talent that walked off the court last year ... for (this team) to find a way to come together and win I think is just a great story.

"It's just a special team for me in so many ways."

Their opponent, Clarion-Goldfield-Dows, heads to state in a similar position. CGD made it to state last year and has no seniors to speak of on the roster. The difference, however, is that the CGD Cowgirls return their kill leader from 2018 in junior Morgan Middleton.

The Beavers' attack is led by their one-two punch of Kelsey Drake and Ella Caffery. Both are sophomores and return from last season's state-qualifying team.

But against CGD, they'll be going up against Middleton, whose 526 kills is second-best in Class 2A.

Caffery and Drake have combined for 142 total blocks this season, so the Beavers may be capable of throwing an effective counter at Middleton's big swings.

"We know they have one big-hitter," Caffery said, "but we want to do better than last year."

Behind Middleton, junior Kendall Lienemann is the biggest worry Wilton will have to contend with. Lienemann, who has 225 kills on the season, gives CGD a formidable second option that the Beavers must be aware of at all times.

Both sides have shown an affinity for putting points up off the serve, as well. Drake leads Wilton with 68 ace serves, followed by sophomore Alexa Garvin's 58. On the other side, Clarion-Goldfield-Dows has three players on the roster — juniors Alaina Freisleben, Middleton and Jadyn Jondle — who have all eclipsed the 50-ace mark this year.

"We didn't know we would make it back again because we lost a lot of seniors," Garvin said, "so going back is really exciting because everyone doubted us."

So as Wilton heads to the U.S. Cellular Center to put a punctuation mark on the season, its first opponent is one in a familiar situation and similar style. Something the Beavers believe they are ready for.

"(The team) has very high hopes," said Grunder. "We know if we play our volleyball then we will be successful in so many ways."

What: Class 2A state semifinal

DES MOINES — For six-plus innings, the stage never seemed too big for the Durant baseball team.

Wilton's Ella Caffery (12) celebrates a point scored against West Branch during the Class 2A regional final at Durant High School.