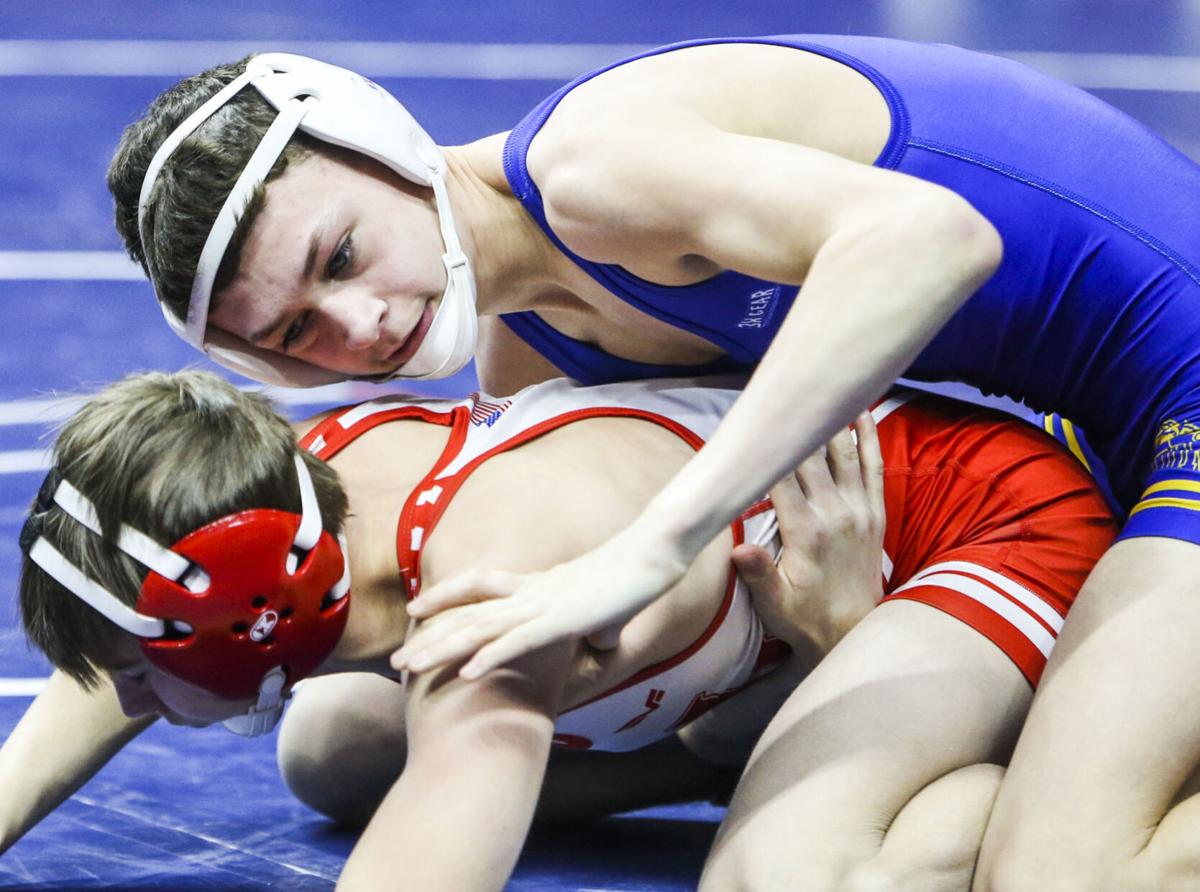 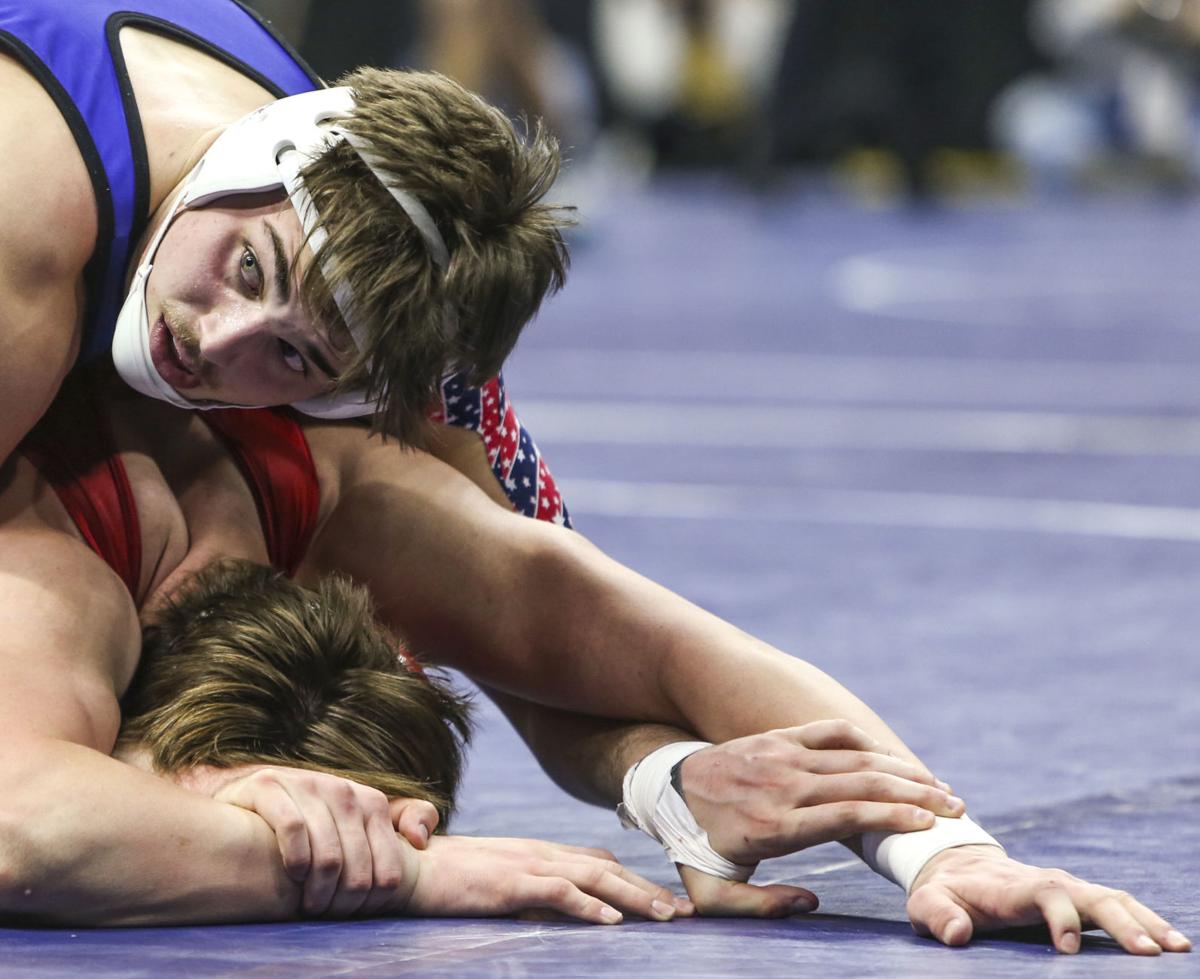 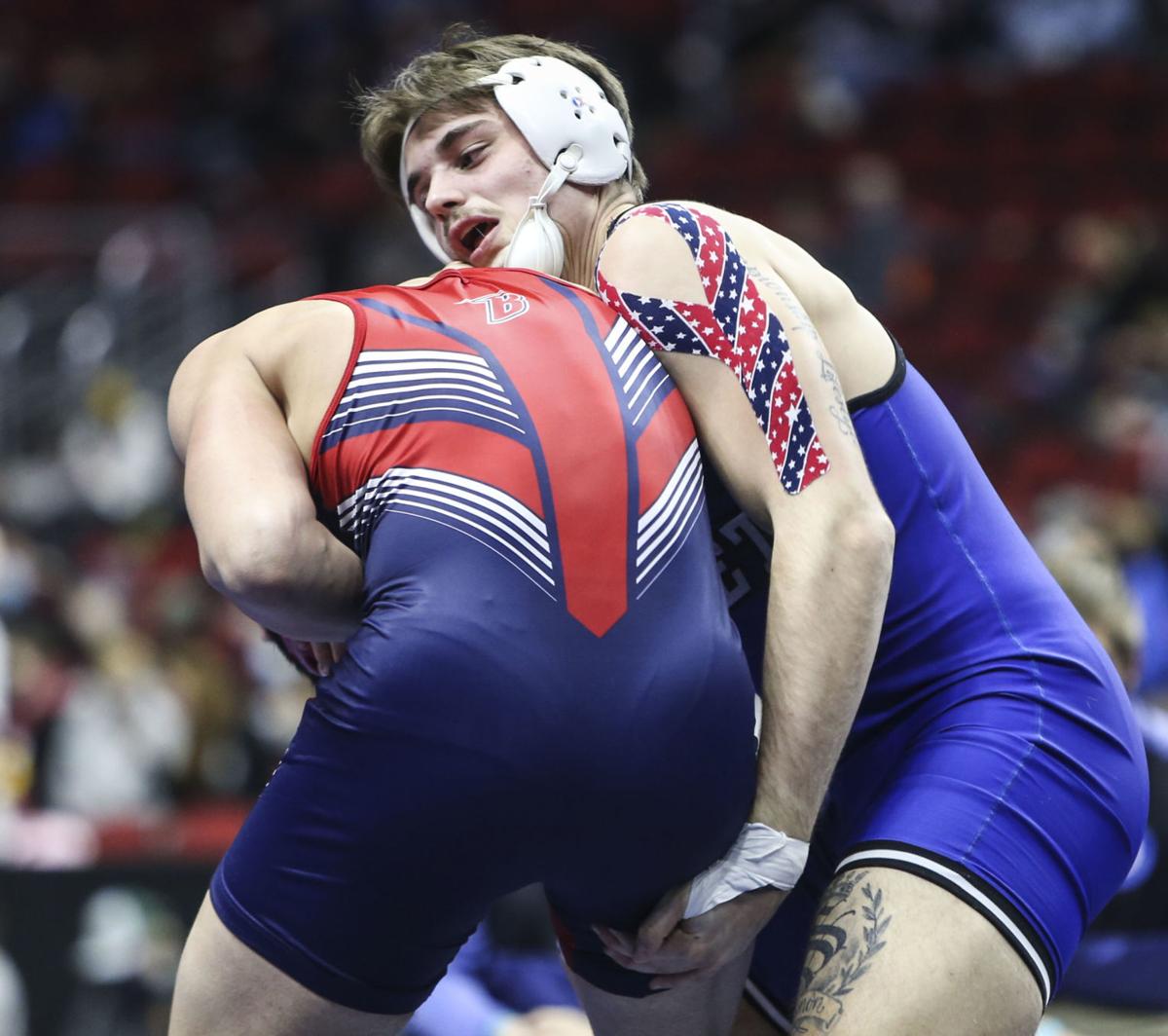 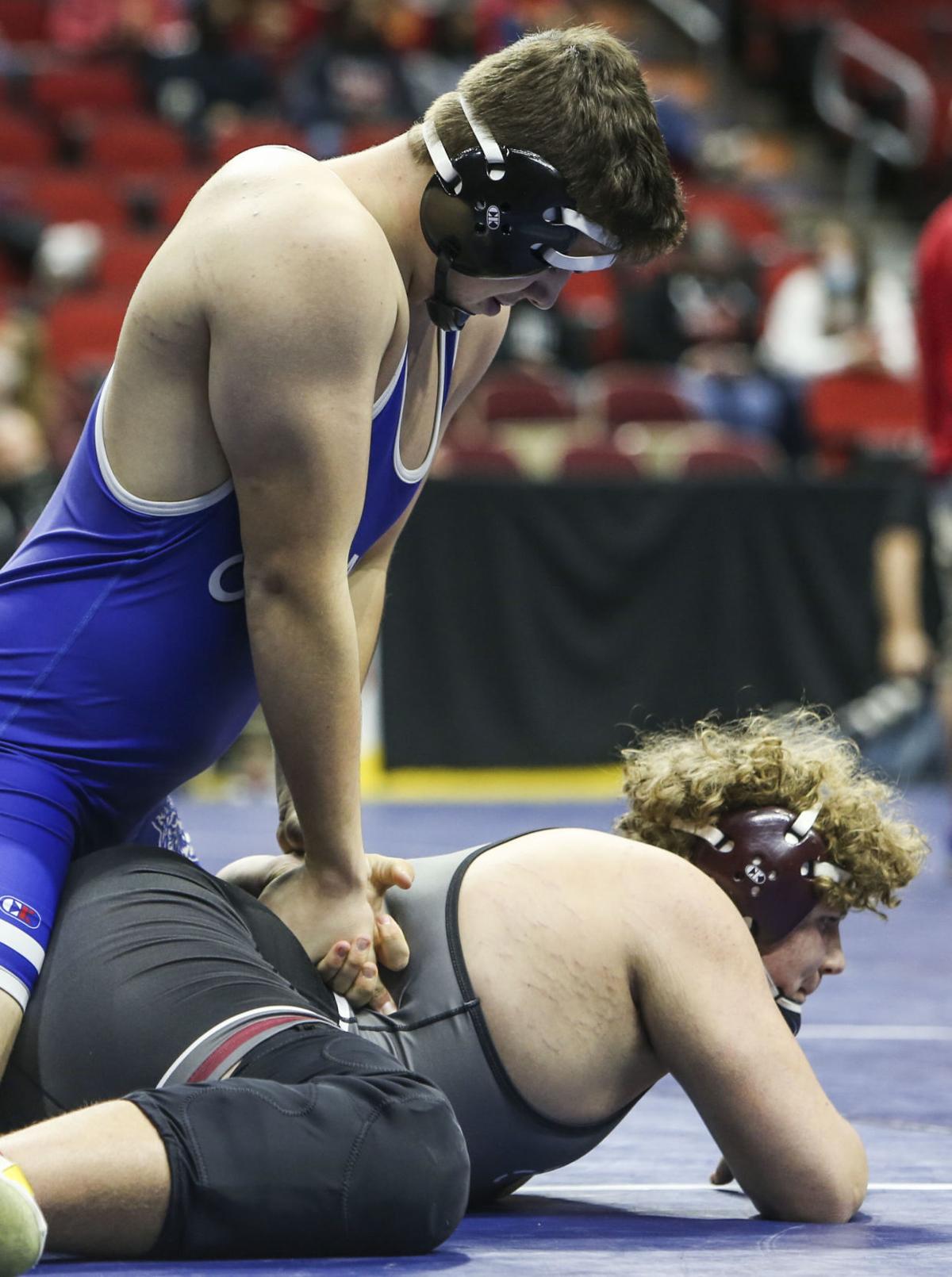 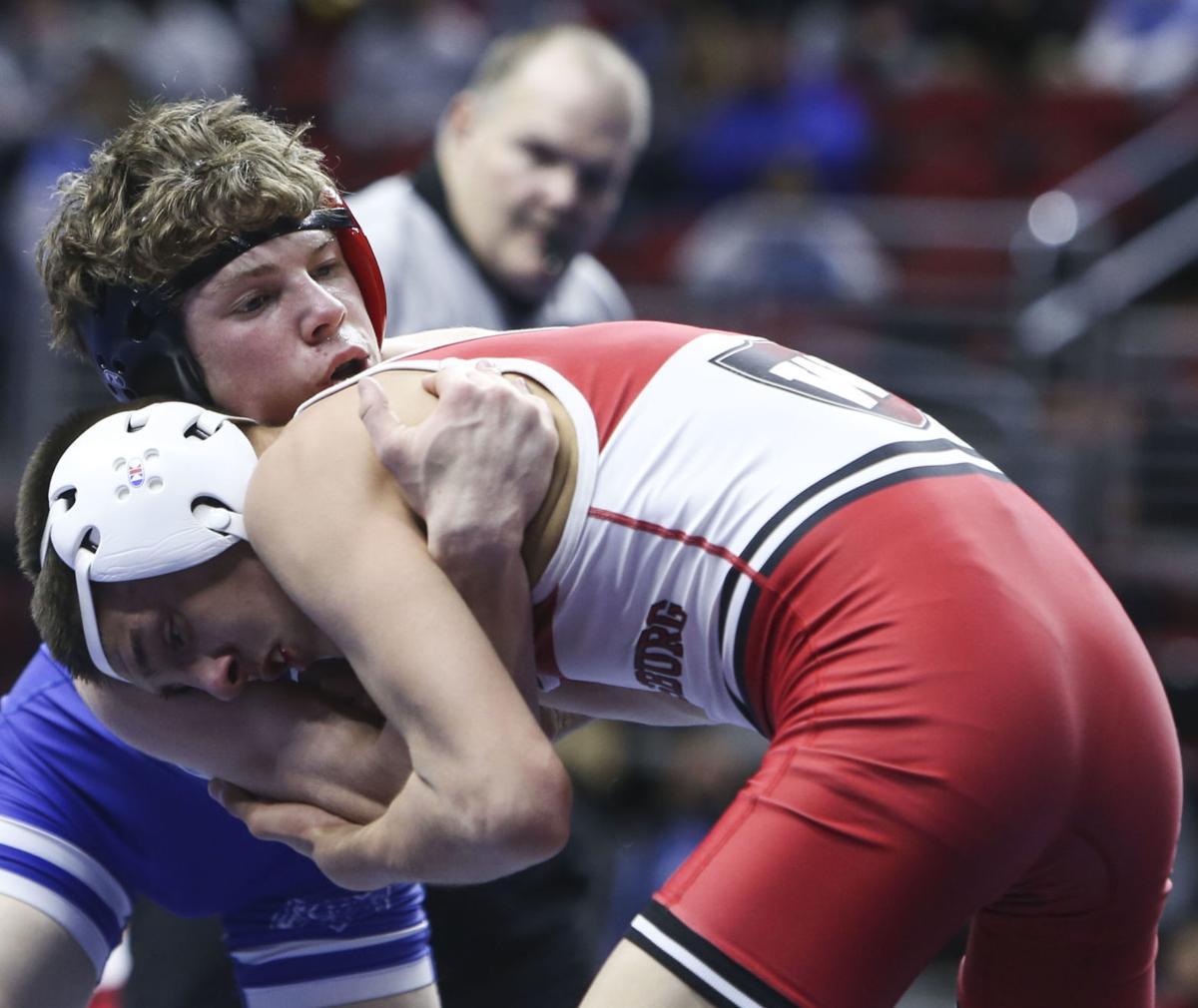 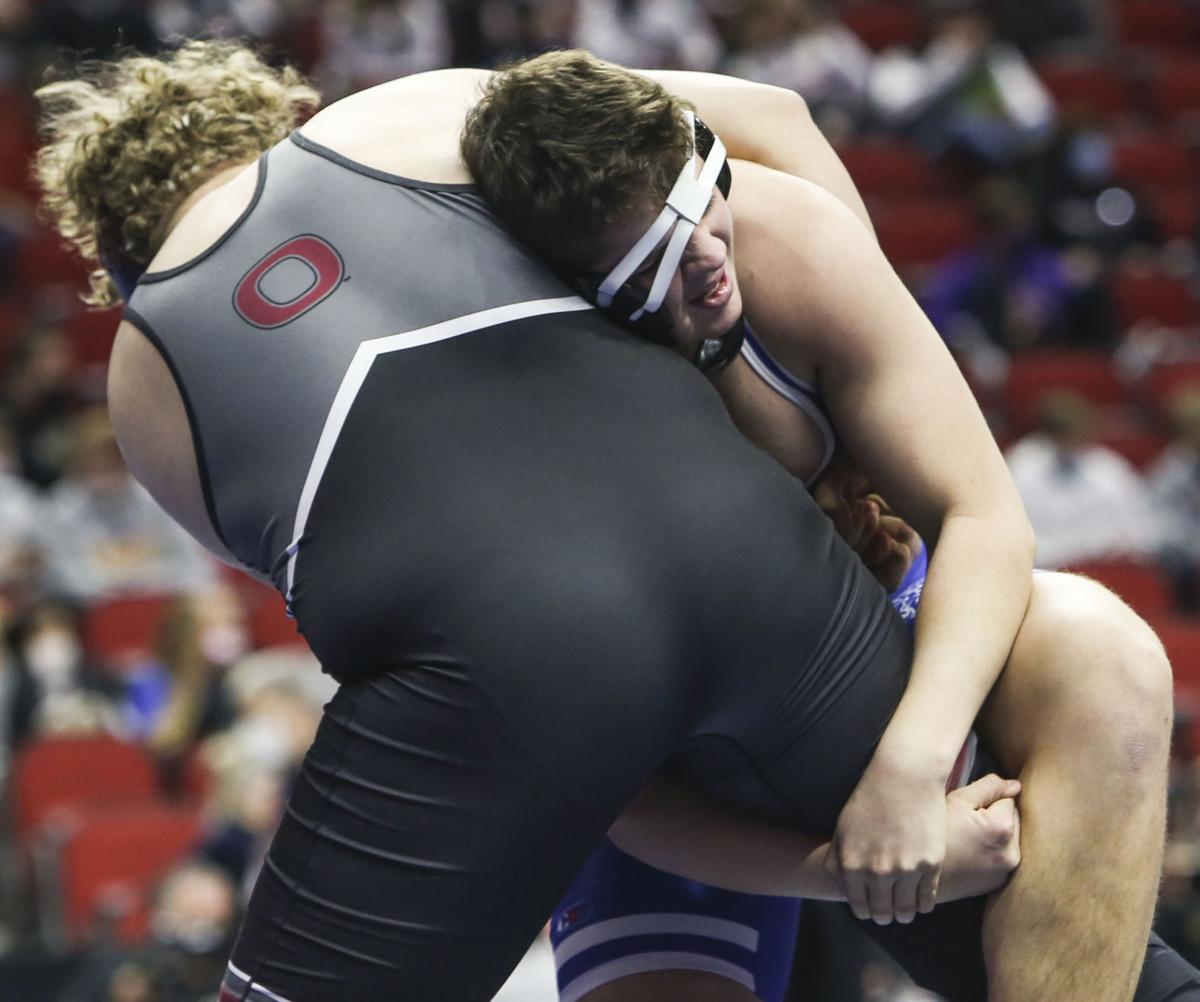 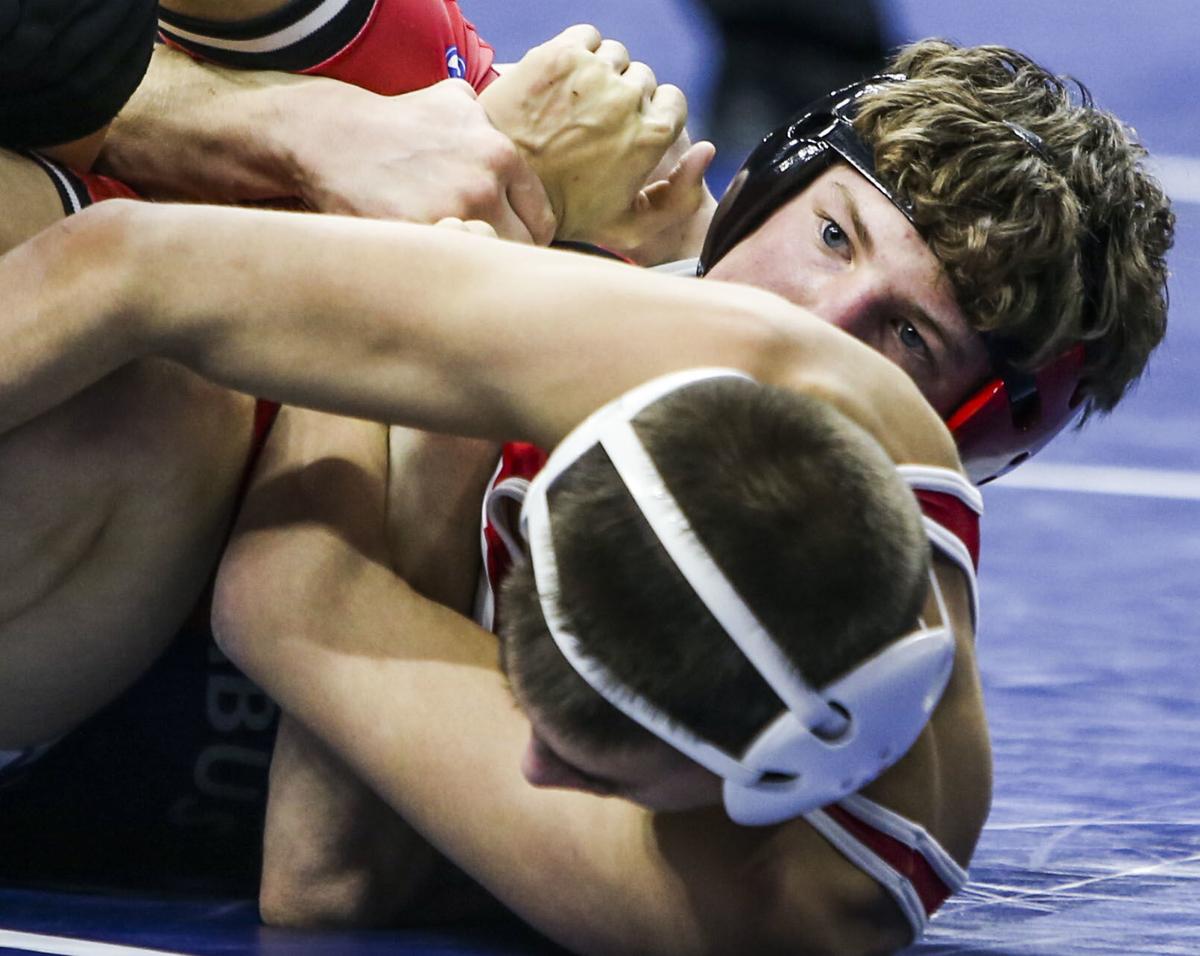 Five seconds after his match started at the Class 1A state wrestling tournament, the Wilton freshman had a takedown. He added five more over the next 2½ periods to register a 19-4 technical fall in the opening round.

“There was maybe a little bit of adrenaline running through me, but I wasn’t nervous,” Brisker said. “Just wrestling here all my life, I was ready to go. I knew I had this one in the bag.”

Brody came to Wells Fargo Arena as a second-grader for the first time to watch this tournament. For the past six years, he has been here either to compete in AAU kids tournaments or watch his two older brothers.

The bright lights did not faze him one bit.

"I wanted to get to my attacks and start this tournament off with a good win," Brody said.

His brother, Kael, joined him in the quarterfinals with a 22-6 technical fall in 2 minutes, 39 seconds at 138 pounds.

It was the 17th technical fall for Kael since Jan. 2.

“The goal is to break everybody here,” Kael said. “I’ve got some tough kids in my bracket and the next few matches are going to be tough, but it is good to get the first one out of the way.”

Wilton’s four other qualifiers — Garrett Burkle (113), Colton Cruse (152), Kaden Shirk (160) and Tyrrell Hughes (220) — dropped first-round matches. Burkle and Hughes rebounded to win in the consolation round and remain in the hunt for a medal.

Don Bosco leads the team race after the opening day with 41 points, followed by Lisbon (31) and Logan-Magnolia (23). Wilton is ninth with 13 points.

The Briskers have been doing a lot of winning this season for the Beavers.

Since losing to Williamsburg’s Gavin Jensen at the Marion Invitational on Jan. 16, Brody has strung together 17 consecutive wins.

From getting to his leg attacks to three sets of near fall points, Brody overwhelmed West Hancock freshman Evan Boothroyd. He takes a 48-4 record into Friday's quarterfinals against eighth-ranked Caleb Coffin of Don Bosco.

“I’m actually pretty surprised how much progress I’ve made from eighth grade to now,” Brody said. “It has been about going into each practice knowing there is a purpose and to have a proper mindset.”

Kael, a two-time state place-winner and the top seed at 138, won for the 49th time in 50 matches this season. He registered eight takedowns in 2½ minutes against Lisbon sophomore Indy Harbaugh.

“Last year, I kind of just showed up and didn’t really have any expectation,” Kael said. “I might say in the moment I did, but I didn’t put in the work to say I was here to win it.

“This year, all summer long, I put in the work. I did extra sprints, extra lifts and was trying to get bigger. That is paying off.”

Columbus Community advanced both of its qualifiers to the quarterfinals Thursday night in Lane Scorpil (113) and Chance Malone (285).

Malone recorded a takedown in the first period and another in the third to beat Okoboji's Nick Bronstad 5-0. It was the 37th win in 40 matches for the Columbus senior this season.

West Liberty's Kobe Simon, a state runner-up last year, breezed into the quarterfinals at 220 pounds with a fall in 3:49. Simon posted two takedowns in the first 15 seconds of the match and nine first-period points.

"The first one is always the toughest," Simon said. "It is a feeling of relief knowing you got that one of the way and you're on to (Friday).

"I wish I could have put him away sooner, late in that first period, but overall I wrestled great. I got to my offense and came away with a fall."

Simon, the top seed in his weight class, takes a 34-3 mark into the quarterfinals against Clarion-Goldfield-Dows' Kain Nelson.

"Composure is a big thing when you're wrestling out here on the big stage," Simon said. "Just stay calm, focus on your match and keep wrestling to the whistle."

Simon's teammates, Alex Beaver and Drake Collins, were pinned in the first round. Beaver lost by fall to Sergeant Bluff-Luton's Ty Koedam in 3:15 at 126; Collins was stuck by Davenport Assumption's Allen Catour in 2:36 at 160.