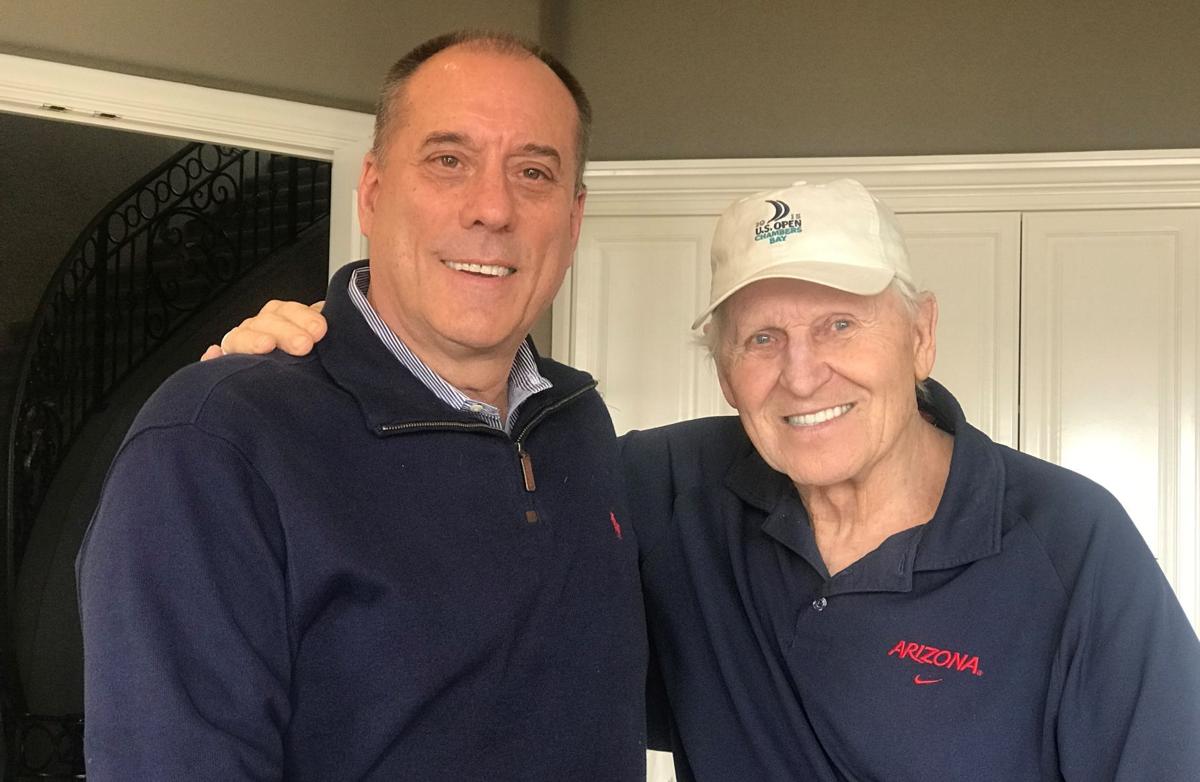 Lute Olson, right, poses with long-time assistant Scott Thompson in February. Olson, who had a Hall of Fame career as a coach at Iowa and Arizona, passed away late Thursday night. 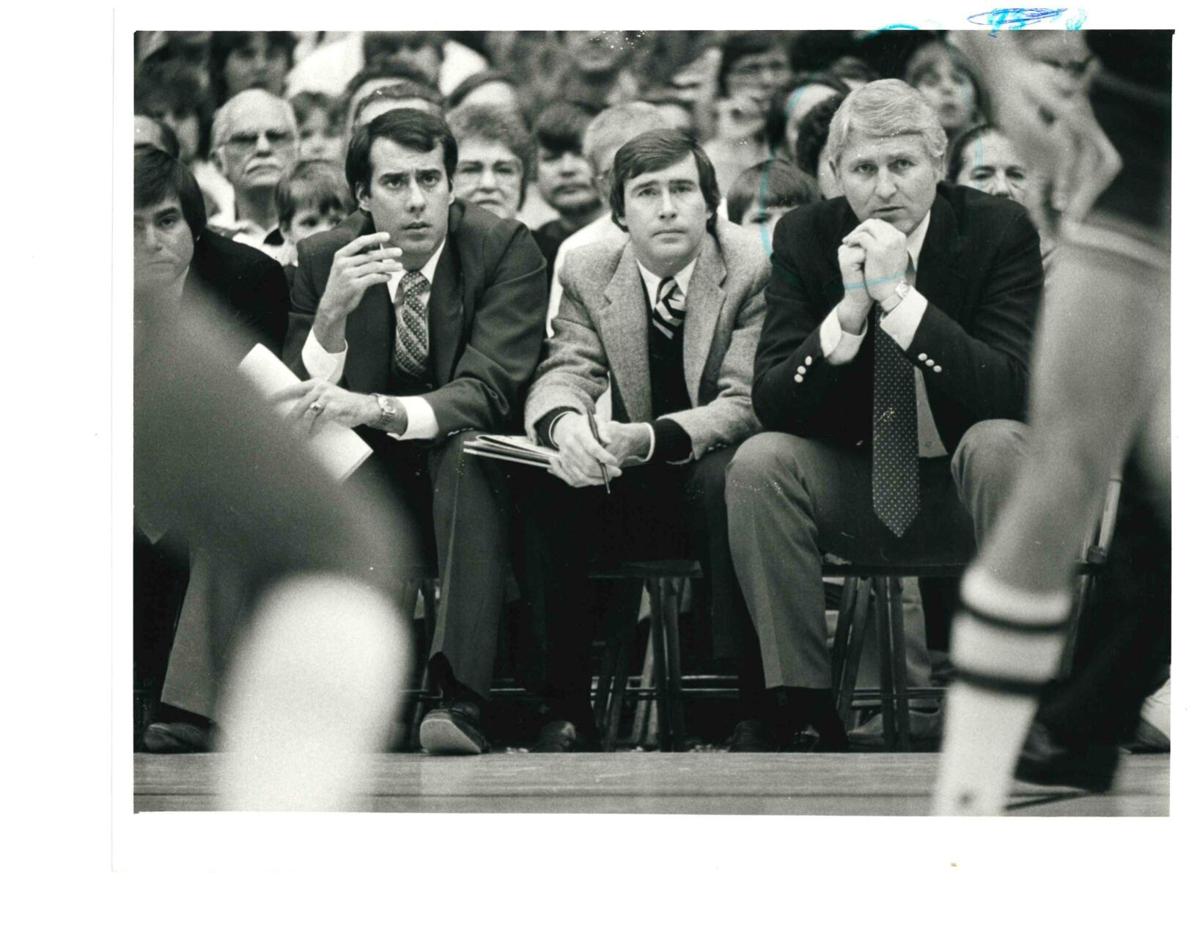 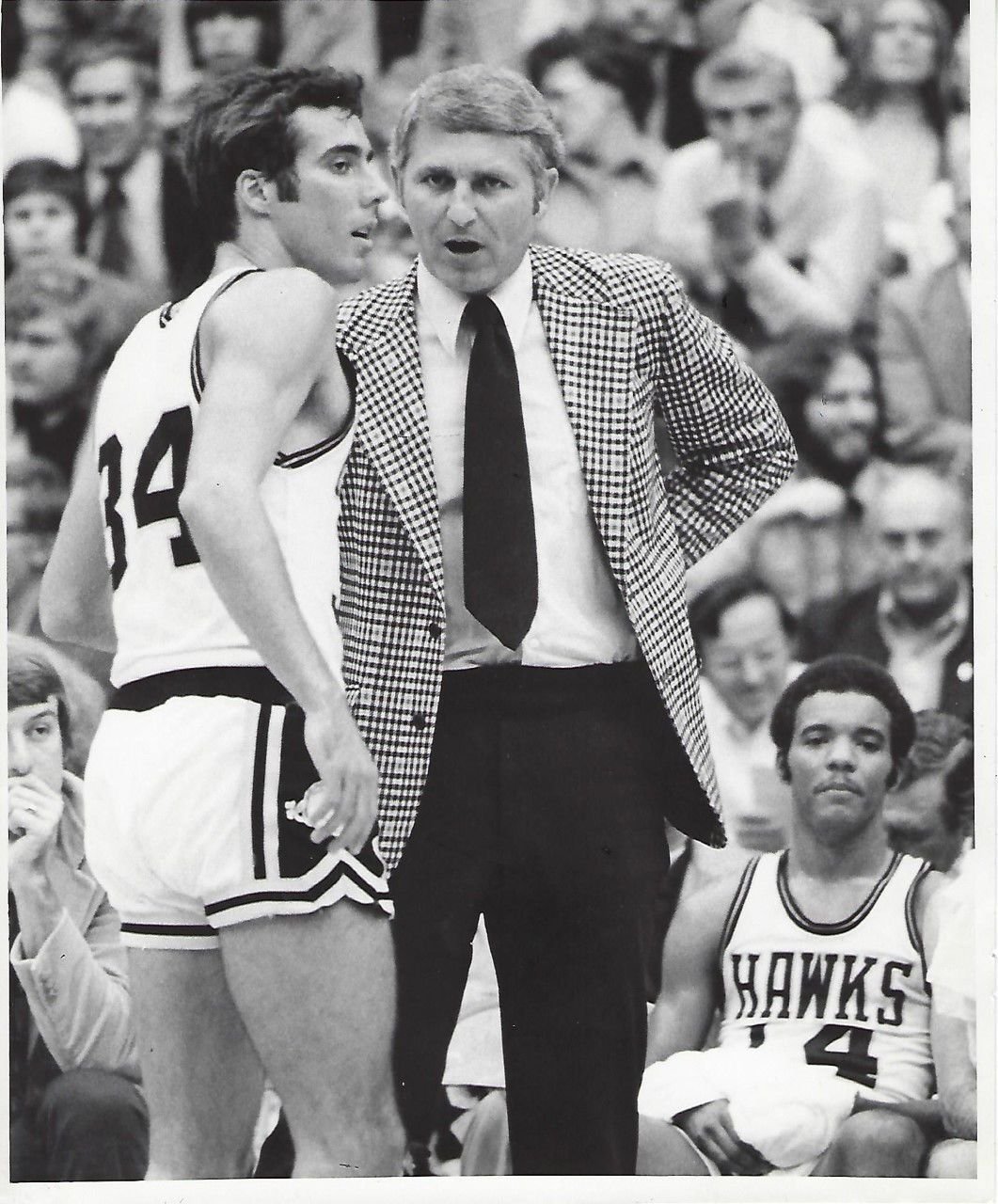 Let’s start with a confession.

I didn’t like Lute Olson as much as I did Hayden Fry. That’s OK because I’m pretty sure Lute liked me even less.

I suspect most University of Iowa fans had a similar pecking order. Most of them really liked Lute. They loved Hayden.

It may have been because Lute was almost too polished. He wasn’t as homespun as Hayden. He could be cold and distant. He may have been even more of a control freak than Fry’s successor, Kirk Ferentz.

That being said, what Olson did for Iowa basketball was very comparable to what Fry did for the football program. He took a floundering ship and steered it to national prominence.

It was impossible not to have immense respect and admiration for what he accomplished in his nine years in Iowa City.

And that’s why Iowa fans everywhere are mourning Olson, who died late Thursday night at the age of 85.

A year before Fry terminated the Hawkeyes’ 23-year Rose Bowl drought, Olson ended a 24-year absence from the Final Four by taking Iowa there in 1980.

The Hawkeyes have gotten back to the Rose Bowl occasionally since then. They haven’t returned to the Final Four.

Olson had an uncanny ability to see things in players that other coaches missed and had a flair for extracting talents that perhaps even the players themselves didn’t know they had.

Even the people who hired him at Iowa may not have known what they were getting.

"Nobody knew who he was because he was coming out of Long Beach, Calif., so there was no history that anybody knew about …," said former Moline star Scott Thompson, who served under Olson as both a player and assistant coach.

"If there was anybody that was close to John Wooden, I think it was him because he came in and was very fundamental and knew what he wanted."

Thompson told us all this a few months ago when we interviewed him about his induction into the Quad-City Sports Hall of Fame. It’s an honor he figured he never would have achieved were it not for Olson.

"I didn’t consider myself a great player, but he was able to maximize players’ talents," Thompson added. "I was a pretty good shooter and he fit me into the system and helped coach me in the areas where I became an All-Big Ten player. I think there are many players who he helped maximize their talents."

Olson also had a knack for fitting players together into a unit.

That 1980 team that he guided into the Final Four wasn’t supremely talented. It did have one of the best point guards in the country, but Ronnie Lester missed a big chunk of that 1979-80 season with a knee injury and was less than 100% during the NCAA tournament.

Most of the other key players on that team never even sniffed the NBA.

But they played very, very hard and blended together into a cohesive unit.

"That was Lute Olson for you," said Kevin Boyle, who was a junior in 1980. "He knew how to put a team together. There was some blue collar players, hard-working guys who weren’t that gifted athletically and we had some athletes, and we all meshed well together."

Lester also pointed to Olson as a superb role model. He said he never heard him use profanity.

"Lute changed the culture of Iowa basketball by just being who he was," Lester added. "He believed that if you worked harder than the next team, you should have high expectations."

The Final Four run came in Olson’s sixth season at Iowa and he never managed to build on it.

That flash of success, however, did convince the school to build a new arena in an effort to keep him around.

He only stayed around long enough to coach 10 games in the new Carver-Hawkeye Arena.

The Hawkeyes made the NCAA tournament in 1981 and 1982 but lost in the first round both times. The 1983 team was almost certainly Olson’s most talented and it managed to win two games in the tournament, but you got feeling that team could have gone further.

In those few years, it seemed perhaps Olson held the reins a little too tightly. A few players confided that they sometimes played too cautiously for fear of inciting the wrath of the tall, silver-haired stoic in front of the bench.

When a young beat reporter for the Cedar Rapids Gazette dared to write that, Lute bristled. Like we said earlier, he wasn’t my biggest fan.

After the Hawkeyes lost to Villanova in the third round of the NCAA tournament in Kansas City, Olson didn’t return to Iowa City with the team.

Instead, he flew to Arizona to talk to people there about becoming the Wildcats’ new head coach.

"He decided that’s what he’s doing," said Thompson, who had joined Olson’s staff in 1981. "So he called a staff meeting and … he says ‘I’ve taken the job at Arizona.’ And I thought he’d lost his marbles."

Thompson went to Arizona with him to renovate a program that was in even more dire straits than Iowa had been when Olson arrived.

The Wildcats had gone 4-24 the season before and basketball was such a low priority that eyebrows were raised when Thompson wanted to assemble a full-color recruiting brochure.

Olson did an even better coaching job there than he had done at Iowa.

Within two years, he had the Wildcats in the NCAA tournament. He won 20 or more games 20 years in a row and went to four Final Fours. In 1997, he did something he likely couldn’t have done at Iowa — win a national championship.

His Arizona program had many of the same traits as his Iowa teams. He still looked for players who had character as well as talent.

"He always recruited good players and good people, guys who really liked each other and pulled for each other," Lester said.

But Olson was able to attract better athletes to the desert. And he seemed to stop holding the reins quite so tightly.

Not that he would want us to say that.

Lute Olson, right, poses with long-time assistant Scott Thompson in February. Olson, who had a Hall of Fame career as a coach at Iowa and Arizona, passed away late Thursday night.