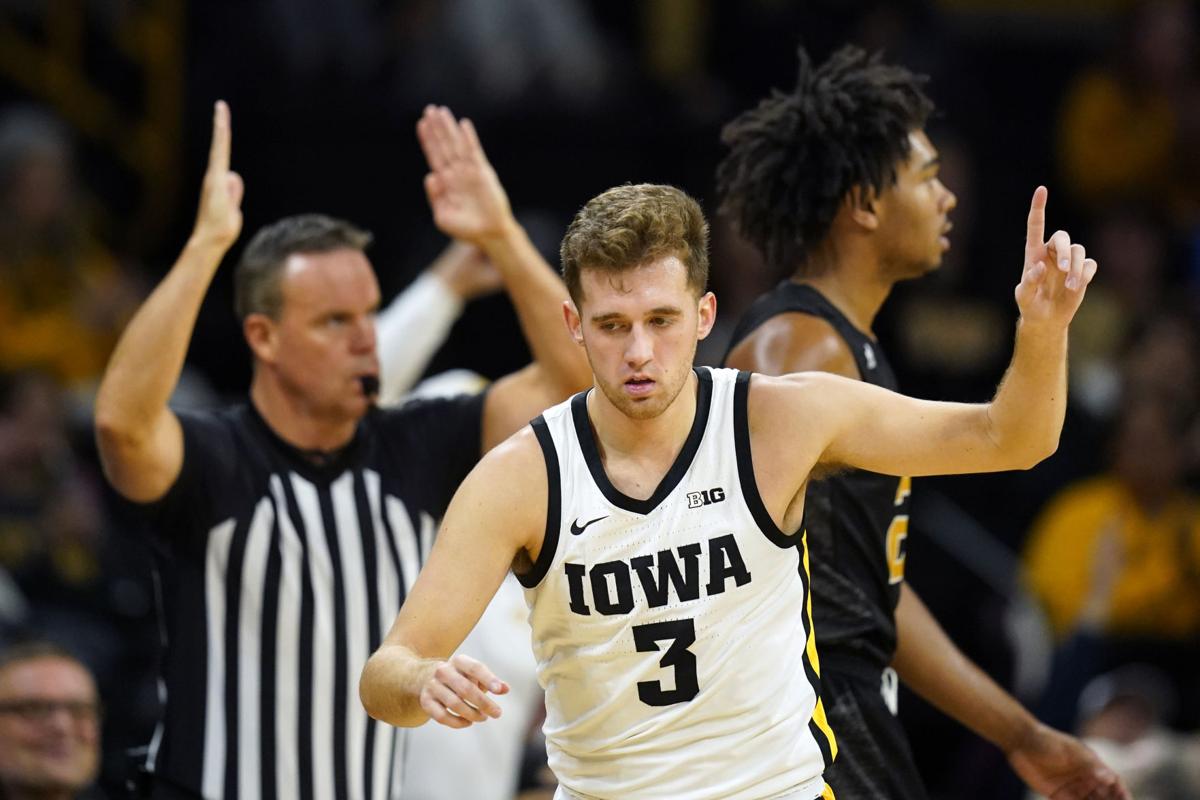 Iowa guard Jordan Bohannon (3) celebrates after making a 3-point basket in the first half Thursday against Alabama State. Bohannon made four of the Hawkeyes' record-breaking total of 20 3s to become the Big Ten's career leader in that statistic. 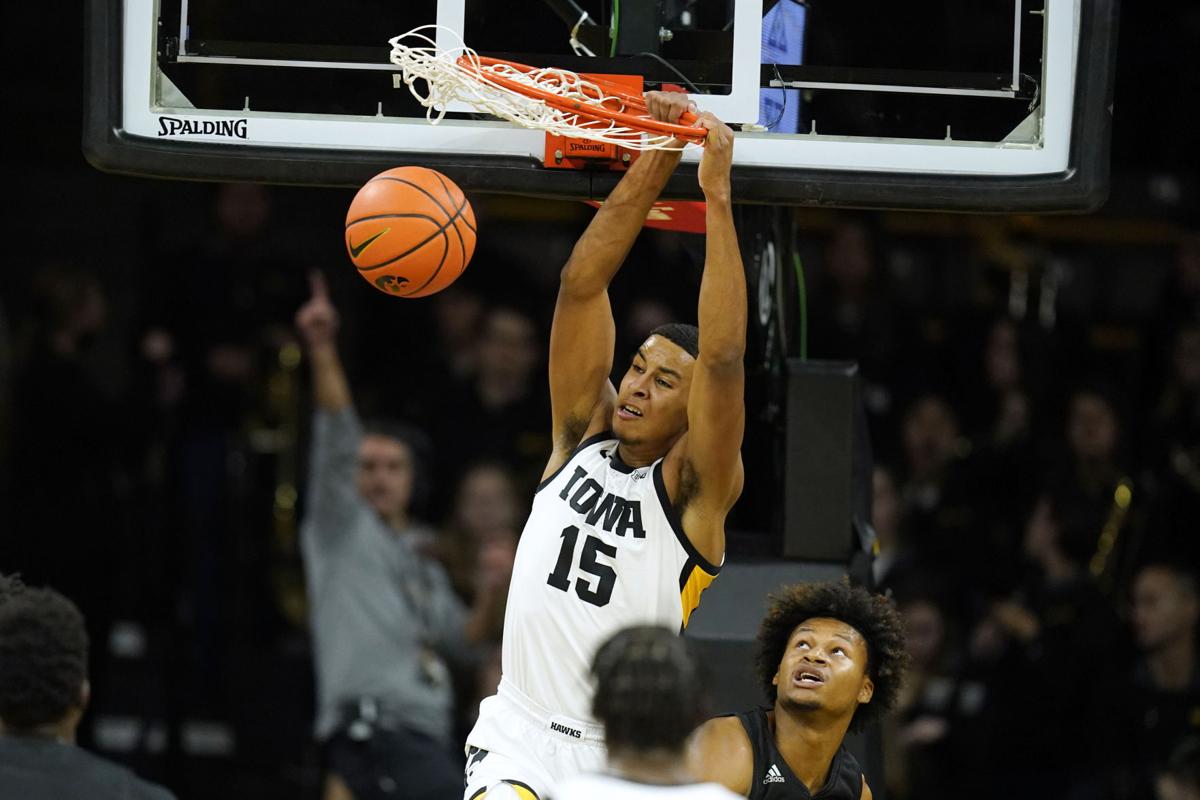 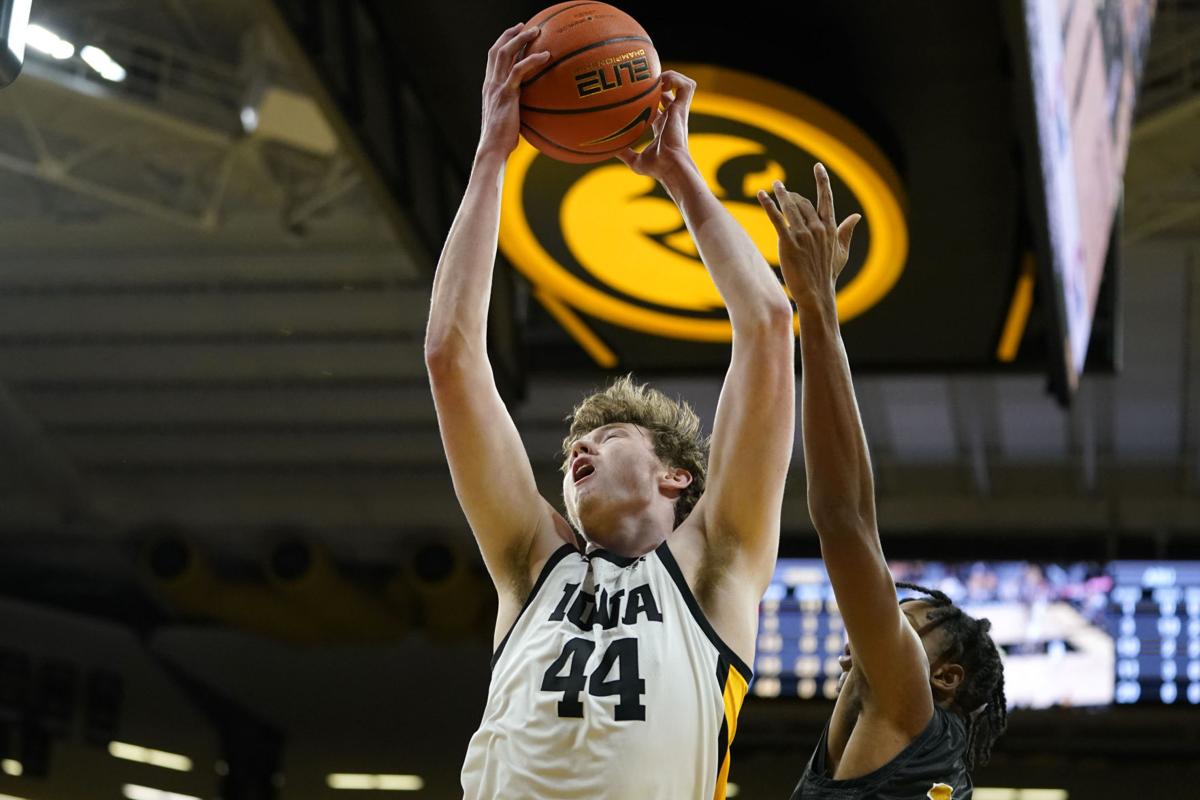 IOWA CITY — Jordan Bohannon said he began thinking about this about 10 years ago when he was a freshman at Linn-Mar High School. He insisted that he looked at some of the Big Ten’s all-time statistical lists then and thought about someday seeing his name there.

"I knew I could break some records when I got to Iowa and I got the opportunity," Bohannon said.

The Iowa senior finally got there Thursday night.

Bohannon became the Big Ten’s career leader in 3-point field goals and was part of a record-shattering barrage of 3s as the Hawkeyes rolled to an easy 108-82 victory over Alabama State at Carver-Hawkeye Arena.

Many of the 9,957 fans in attendance presumably were there to see Bohannon sink the one 3 he needed to unseat former Ohio State star Jon Diebler as the all-time leader.

But they also got to see Payton Sandfort and a lot of other people throw in shots from beyond the arc. They also were treated to another superb all-around effort by Keegan Murray.

The Hawkeyes (4-0) broke a school record by draining 20 3s in the game, topping the mark they set in 2018 against Savannah State.

But the biggest moment of the night came early when Bohannon drilled a 3-pointer with just 2 minutes, 4 seconds gone in the game to top Diebler’s mark of 374 3s. Bohannon added three more later in the game to give him 378 for his career.

"It’s pretty special to be listed with some of the names that have gone through whether it’s been at Iowa or in the Big Ten," Bohannon admitted.

After he broke the record, the crowd stood and applauded for a full minute after the shot swished through. Following the game, Bohannon went over and celebrated with members of his family.

As he did so, he got a phone call. It was Diebler.

"He was just wishing me the best and congratulating me," Bohannon said. "That’s pretty special to see a guy like that do that after I just passed him for the record."

Sandfort admitted it was a little mind-boggling to think of the number of 3s Bohannon has made since arriving in 2016.

"I mean, I made like my seventh tonight," the freshman said. "I’ve got a long ways to go. He’s been a great role model to me so this was cool to see."

Iowa coach Fran McCaffery said he hadn’t really been thinking about the record and he didn’t think Bohannon was preoccupied with it either, despite the fact that the sixth-year senior was just 1 for 9 from the perimeter Tuesday in a victory over North Carolina Central.

"We don’t talk about it, but I knew it was inevitable," McCaffery said.

"It’s pretty amazing," he added. "There’s been a lot of great players in this league, a lot of great 3-point shooters. You know you have to work really hard to do something like that."

Bohannon said it actually was a "blessing in disguise" that he wasn’t able to break the record Tuesday. This way, he got to do it on his father’s birthday. He grew emotional when looking back on the number of practice shots he has taken with Gordy Bohannon through the years.

"It’s almost like I was destined to break it on his birthday," Bohannon said.

He reflected on all the 4:30 a.m. workouts he did in high school where he wouldn’t leave the gym until he had made 500 shots.

His college career has been flecked with multiple foot injuries, two hip surgeries and frequent criticisms.

"It’s hard to even put into words because it’s been a battle for sure," he said.

"That’s what makes this special," he added, "is the dark times you go through."

Bohannon’s record-breaker was part of an early flurry in which the Hawkeyes, playing without injured Patrick McCaffery, bolted to a 20-point lead within the first nine minutes and held a 63-36 halftime margin.

Keegan Murray had 22 points by then. Sandfort, who scored 14 points in the first three games of his career, had that many by the intermission.

McCaffery put a group of reserves, including Sandfort and Kris Murray, on the floor to open the second half but the onslaught continued with Alabama State refusing to come out of its zone defense.

"I don’t see a lot of team playing us 40 minutes of zone," McCaffery said. "I didn’t think they’d stay with the zone in the second half."

Sandfort tied the previous school record of 19 with his fifth 3-pointer of the night with 5:39 to go but the Hawkeyes then went five minutes without making another. Walk-on Luc Laketa finally broke the mark by connecting from the left corner with 37.6 seconds left.

"I think it shows how dangerous this team can be, honestly," Bohannon said. "People have said we might not be a great shooting team. … They came out in a zone and we were ready to play."

Innovative insulation unveiled for Team USA ahead of Winter Olympics

Iowa guard Jordan Bohannon (3) celebrates after making a 3-point basket in the first half Thursday against Alabama State. Bohannon made four of the Hawkeyes' record-breaking total of 20 3s to become the Big Ten's career leader in that statistic.