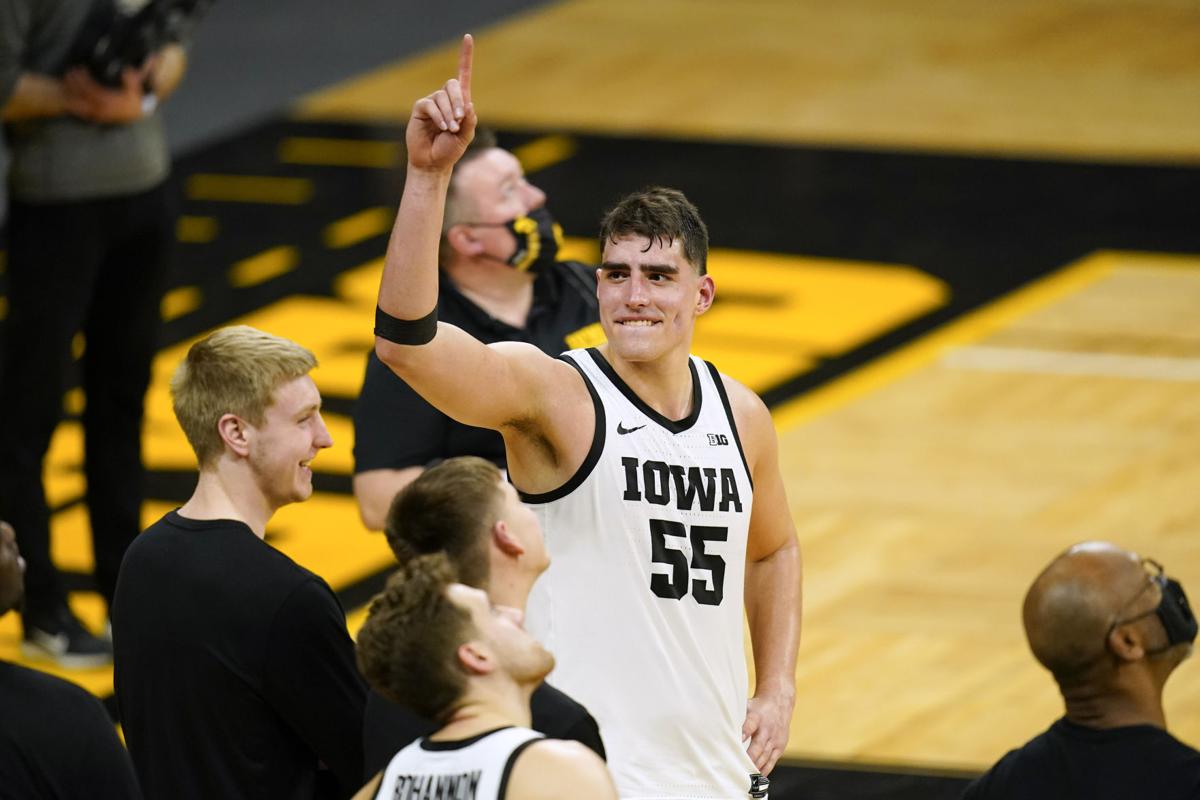 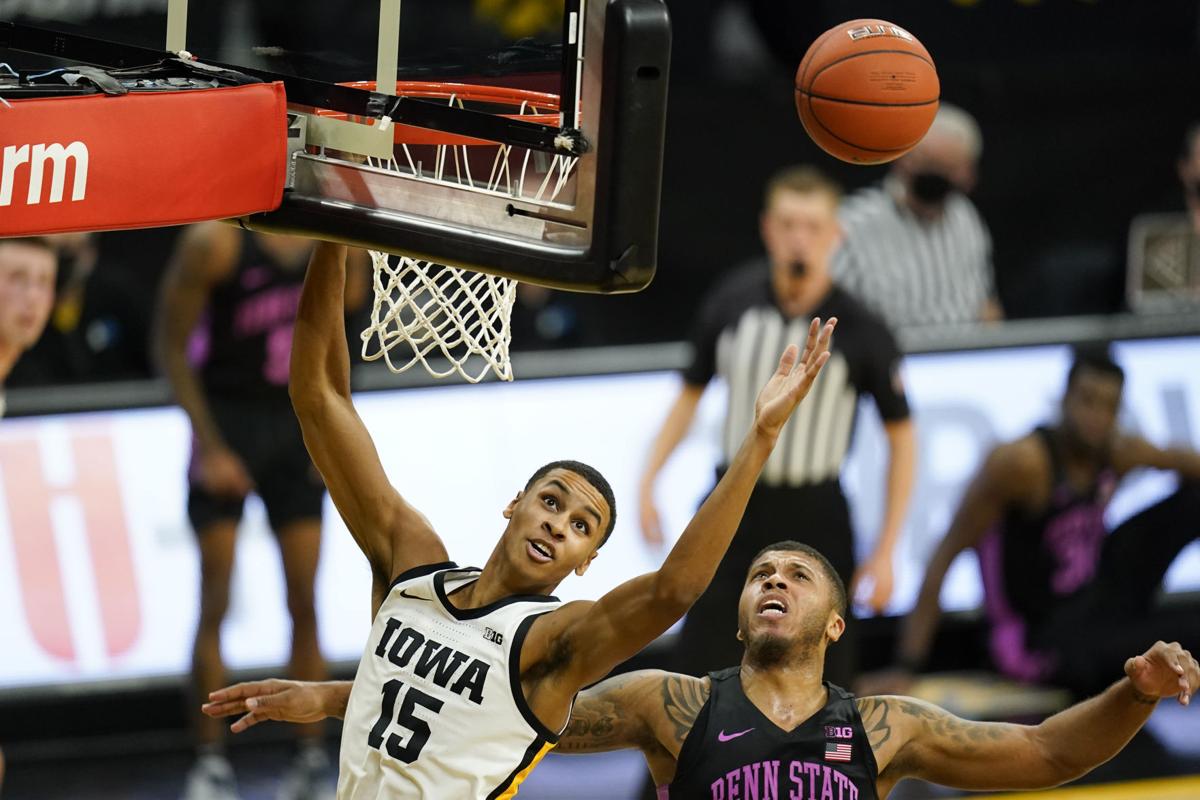 Iowa forward Keegan Murray (15) fights for a rebound with Penn State guard Myles Dread during the first half of Sunday's game. The Hawkeyes overcame a sluggish first half and a slew of turnovers to beat Penn State 74-68. 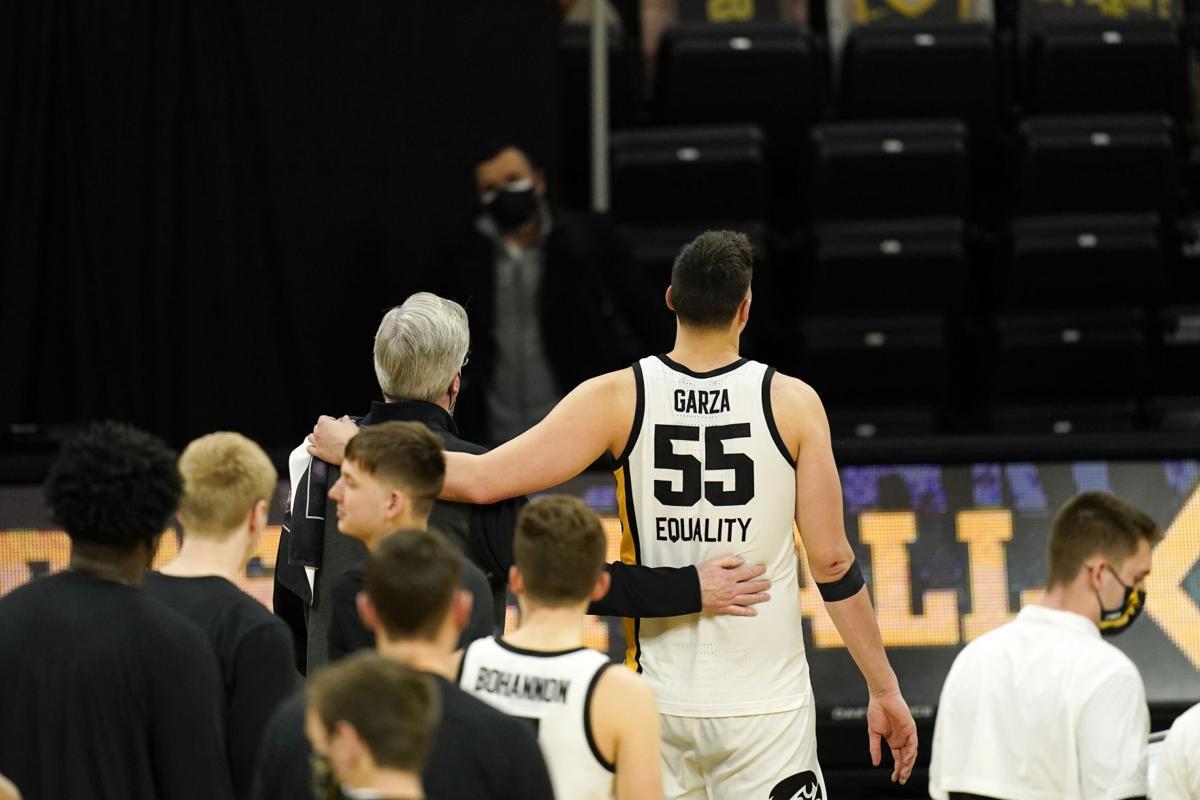 IOWA CITY — Luka Garza has said over and over that he came back for one more season at Iowa to win games, not to set records and collect awards.

So, for much of the afternoon Sunday it didn’t look as though he was going to have much to celebrate.

In the end, however, there was plenty of cause for jubilation.

Garza became Iowa’s career scoring leader in the middle of the second half and he and his teammates finally were able to turn things around with defense as they managed to grind out a less-than-picturesque but extremely satisfying 74-68 victory over Penn State at Carver-Hawkeye Arena.

Garza scored on a layup with 8 minutes, 18 seconds remaining to top Roy Marble’s 32-year-old record of 2,116 points. Fittingly, it came on a pass over the top of the defense by fellow senior Jordan Bohannon, who finished the game only two assists short of Jeff Horner’s Iowa career record.

The victory, the fourth straight for the 11th-ranked Hawkeyes, also was the 100th Big Ten win for head coach Fran McCaffery.

Garza admitted it was an honor “to even be in the same sentence’’ as Marble, who died in 2015, but he admitted it wouldn’t have meant anything if it had happened in a loss.

“It wouldn’t have felt the same,’’ Garza said. “It felt really good to get a win and continue this win streak and have that as a special bonus on the end.’’

“I don’t even think he would have wanted to talk about it if we had lost the game,’’ McCaffery added.

Garza finished with 23 points and 11 rebounds for the Hawkeyes (17-6, 11-5 Big Ten), who also got a huge lift from CJ Fredrick. The sophomore guard, who has been in and out of the lineup with a lower-leg injury for more than a month, contributed 18 points, including a pair of big baskets down the stretch.

The Hawkeyes needed all of them as they overcame a season-high 16 turnovers and rallied from 7-point deficit in the second half.

Garza said the only time he really allowed himself to think about the scoring record was during the first television timeout of the second half. He had been fouled just before the break and had plenty of time — probably too much time — to contemplate two upcoming free throws that could have given him the record.

He made the first foul shot to tie Marble, but his second shot didn’t come close to hitting anything.

“I’ve never air-balled a free throw in my life,’’ Garza said. “It’s a miracle the first one went in. I didn’t feel good on either of them.’’

He missed another free throw a few minutes later before Bohannon found him and Garza converted to get the record.

“Once I got past that point, I was fine,’’ Garza said. “Obviously, I was a little nervous on the free throw. After that, I was able to calm down.’’

McCaffery and Garza pointed to Iowa’s defense as the primary factor in the win.

Penn State missed 12 straight shots from the field during the stretch in which the Hawkeyes finally took command and ended up going just 2 for 21 from the floor in the last 12 minutes.

“I thought defensively that’s about as well as we can play,’’ McCaffery said. “We were locked in. We were rebounding the ball, getting stops, limiting them to one shot.’’

In addition to Garza’s record and McCaffery’s milestone win, Fredrick’s performance was cause for celebration. He had eight points in an early surge that gave the Hawkeyes a 19-6 lead before they, in Garza’s words, “took our foot off the gas.’’ Fredrick also made a huge 3-pointer as the shot clock was expiring to interrupt a Penn State run with about four minutes to go.

Fredrick said he got a chance to work out some kinks and find a rhythm while playing 31 minutes Thursday night at Wisconsin.

“That was just good to get that in to have a real 31 minutes of big boy basketball,’’ he said.

The Hawkeyes also got 11 points, 11 rebounds and four assists from Wieskamp, who committed six turnovers and struggled much of the day but came alive to score their first nine points of the second half.

“It was an amazing team win,’’ Garza said. “A lot of guys battled, CJ Fredrick was amazing and we played really good defense in the second half.’’

After it was over, the Hawkeyes stayed on the court as a video was shown on the big screen in which several Iowa greats of the past and Garza’s father, Frank, offered their congratulations.

Garza and McCaffery then walked arm in arm to the stands, where Iowa players waved to a young cancer patient they have befriended.

As they walked, McCaffery said he tried to tell his All-American center how much he has meant to the Iowa program.

“I just told him I loved him and I appreciate him as our leader,’’ McCaffery said. “Every game you become more and more impressed by the way he goes about his business and sets an example for everybody in that locker room.’’

Hawkeyes collecting awards but focus is on task at hand

As the Iowa basketball team embarked on what is almost certainly its most challenging week of the season, the awards continued to flood in for…

Iowa forward Keegan Murray (15) fights for a rebound with Penn State guard Myles Dread during the first half of Sunday's game. The Hawkeyes overcame a sluggish first half and a slew of turnovers to beat Penn State 74-68.