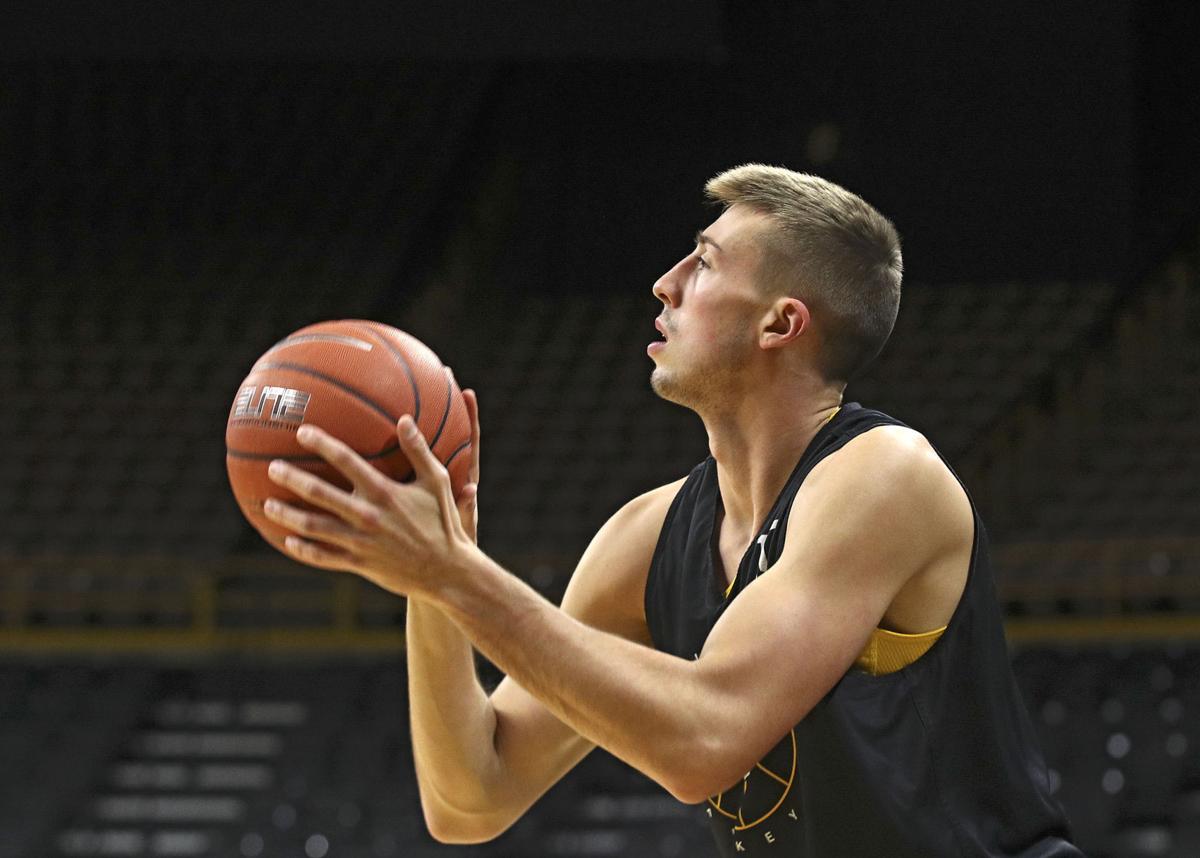 Iowa forward Joe Wieskamp has worked hard in the off-season to gain strength so he is better able to cope with the physical defensive tactics of opposing teams. 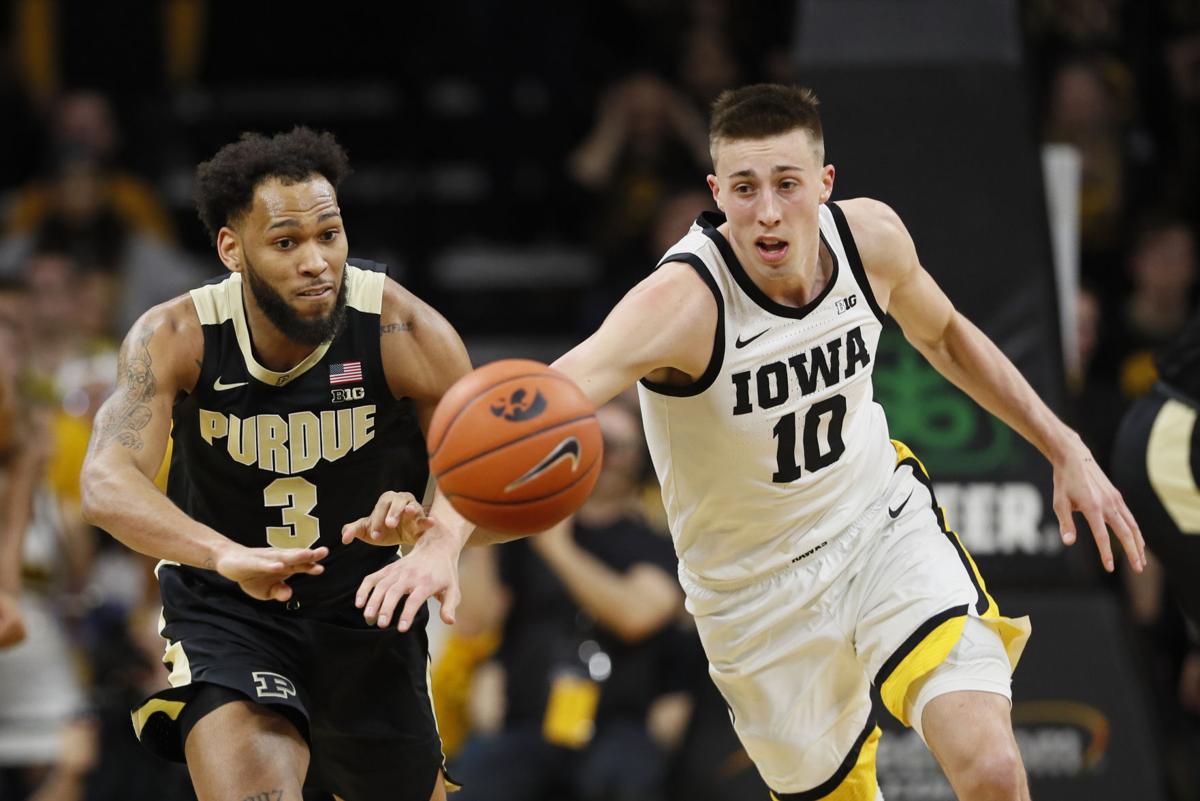 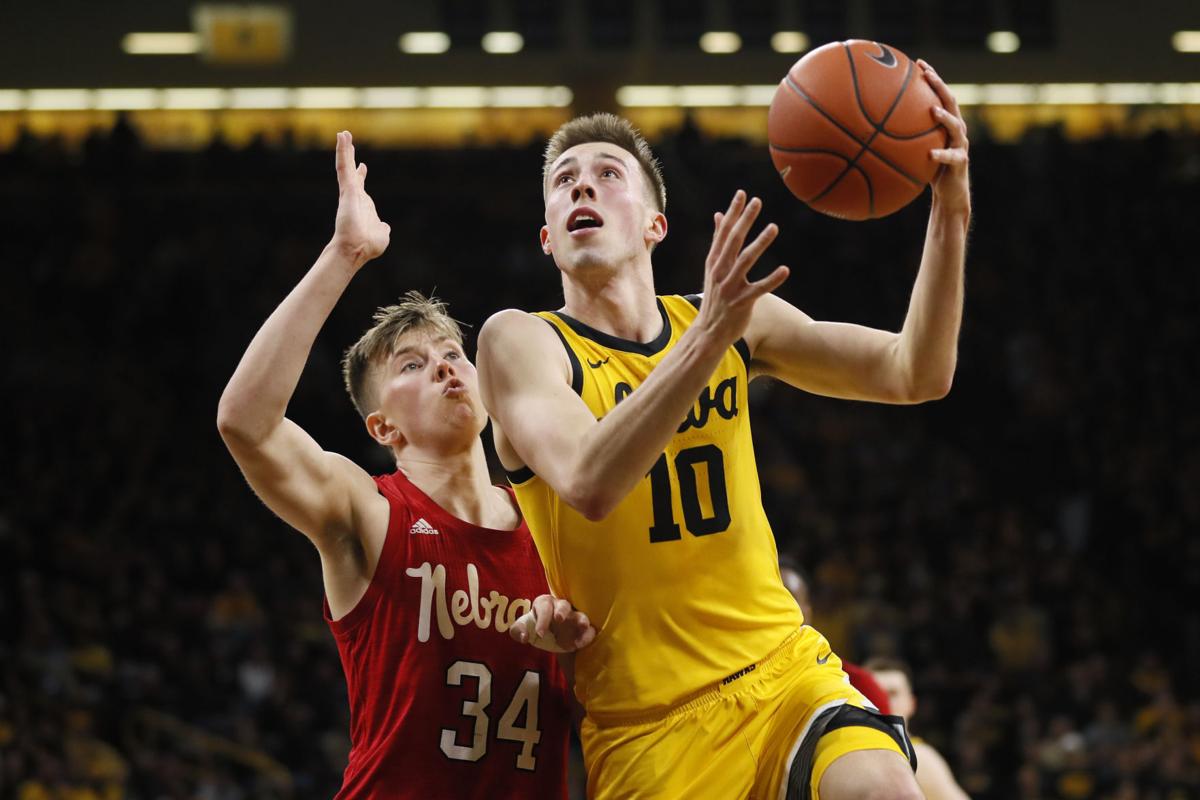 Iowa’s junior forward got down on one knee and asked his girlfriend, former Iowa women’s basketball player Makenzie Meyer, to marry him.

"I was pretty nervous that whole week leading up to that," Wieskamp admitted.

But he apparently executed the play flawlessly. She said yes.

So now, the next time he is called upon to take a last-second shot or make some crucial free throws? No problem.

He also is going to be ready the next time some team tries to bump and shove to try to throw him off his game, as Minnesota and a few other teams did last season. Wieskamp did more than just get engaged in the off-season.

"It’s definitely something I worked on, especially during the quarantine period," he said. "Not a lot of guys had access to gyms but luckily I had weights at home. I just really tried to focus on my body, both physically and mentally, during that time period, and I think it’s paid off."

The 6-foot-6 former Muscatine High School star is only slightly heavier — he is listed at 212 pounds after being 210 last season — but he said he transformed a lot that weight into muscle.

"Gaining strength is going to allow me to be more physical on those drives and being able to cope with the contact and them being up in my space, but also just becoming a smarter player," he said.

To that end, he also spent a lot of time since last season looking at video of how teams defended him.

"Looking back there are things I could have done to create more opportunities," Weiskamp said. "That’s the reason I went back and watched those things. I’m looking forward to learning from those and being better this season."

He took a step up last season. After averaging 11.1 points and 4.9 rebounds per game while making the Big Ten’s all-freshman team in 2018-19, he averaged 14.0 and 6.1 last season. He also led the Big Ten in free throw percentage although his other shooting numbers dropped off somewhat.

"The thing about Joe, he's an incredibly hard worker and he's smart," Iowa coach Fran McCaffery said. "What you're going to see now is a guy as a junior who started for two years and has been a really good player, not only in our league but nationally, and he's just going to be better. … He's just going to be a really aggressive offensive player in his junior year, and now he's physically ready to be one of the elite players in the country."

Both Garza and Wieskamp feel they can play off one another to make each even more effective.

"I think our chemistry is pretty darn good," Wieskamp said. "It’s improving, even within this off-season."

Garza agreed that he and Wieskamp have grown together in their third year playing together.

"I think he went into this off-season with the mindset that he was going to continue to grow," Garza said. "He worked so hard during the summer, in the weight room and out on the court. He’s just really mentally prepared for this year and knows what the challenge is."

Wieskamp and Garza have talked with teammates about some lofty aspirations. It is not uncommon in interviews for any of them to drop in the phrase "national championship."

It’s why Garza chose to pull out of the NBA draft during the summer. It’s why Wieskamp opted to not even put his name into the draft, as he did following his freshman year.

"I think we have a lot of unfinished business that we wanted to come back for," Wieskamp said "We have a lot of talented guys in this group so we're looking forward to the opportunity and trying to make the most of it and do something special."

The college basketball season is a mess before it even starts. With the sport's leaders intent on playing on, they need to simplify schedules to adjust for the COVID-19 surge.

The college basketball season is a mess, and we haven't even gotten to the opening tipoff.

Iowa forward Joe Wieskamp has worked hard in the off-season to gain strength so he is better able to cope with the physical defensive tactics of opposing teams.