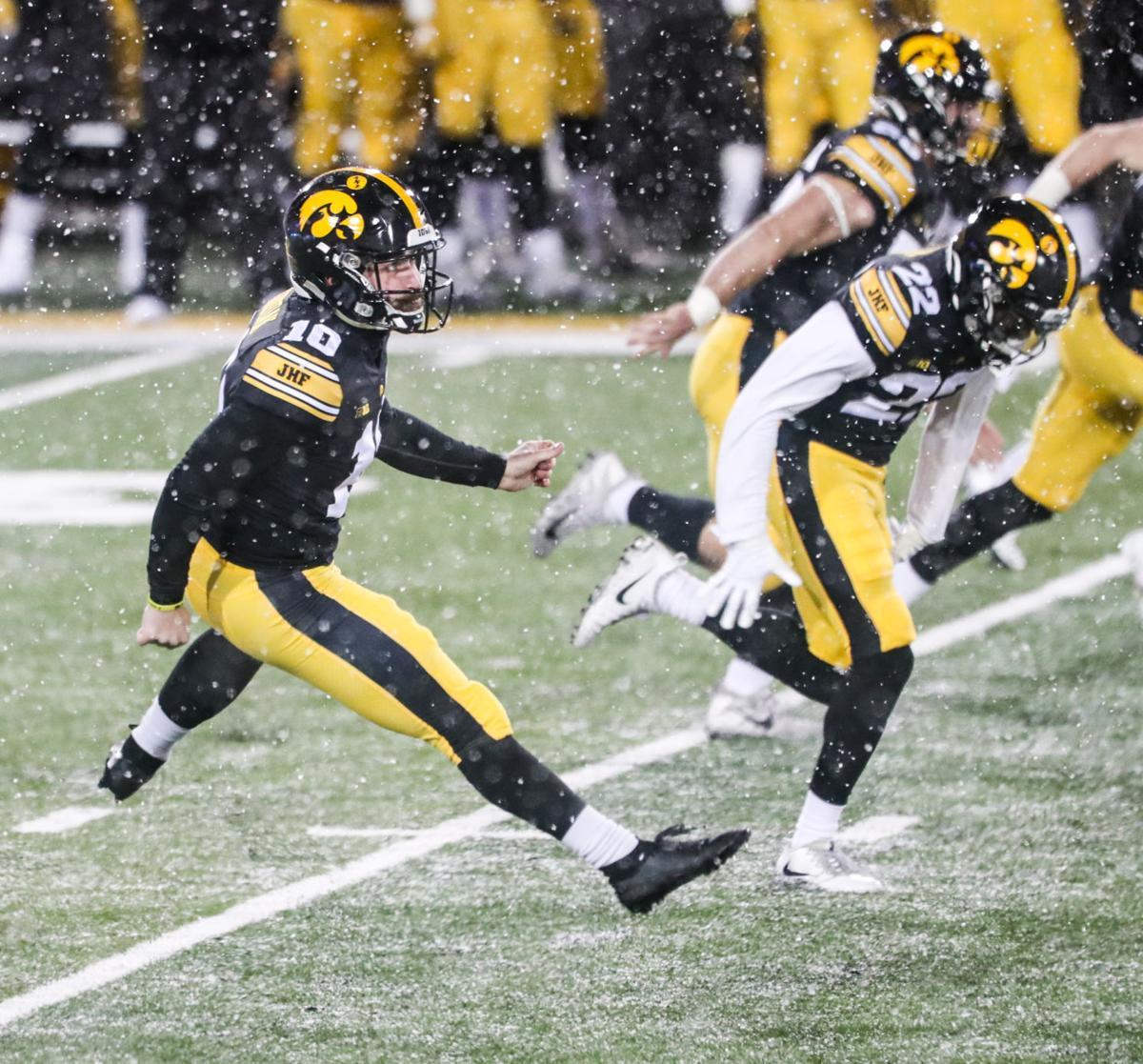 Iowa's Caleb Shudak (10) kicks off against Wisconsin during a game last season in Iowa City. Shudak will be taking over the place kicking duties from the graduated Keith Duncan next season. 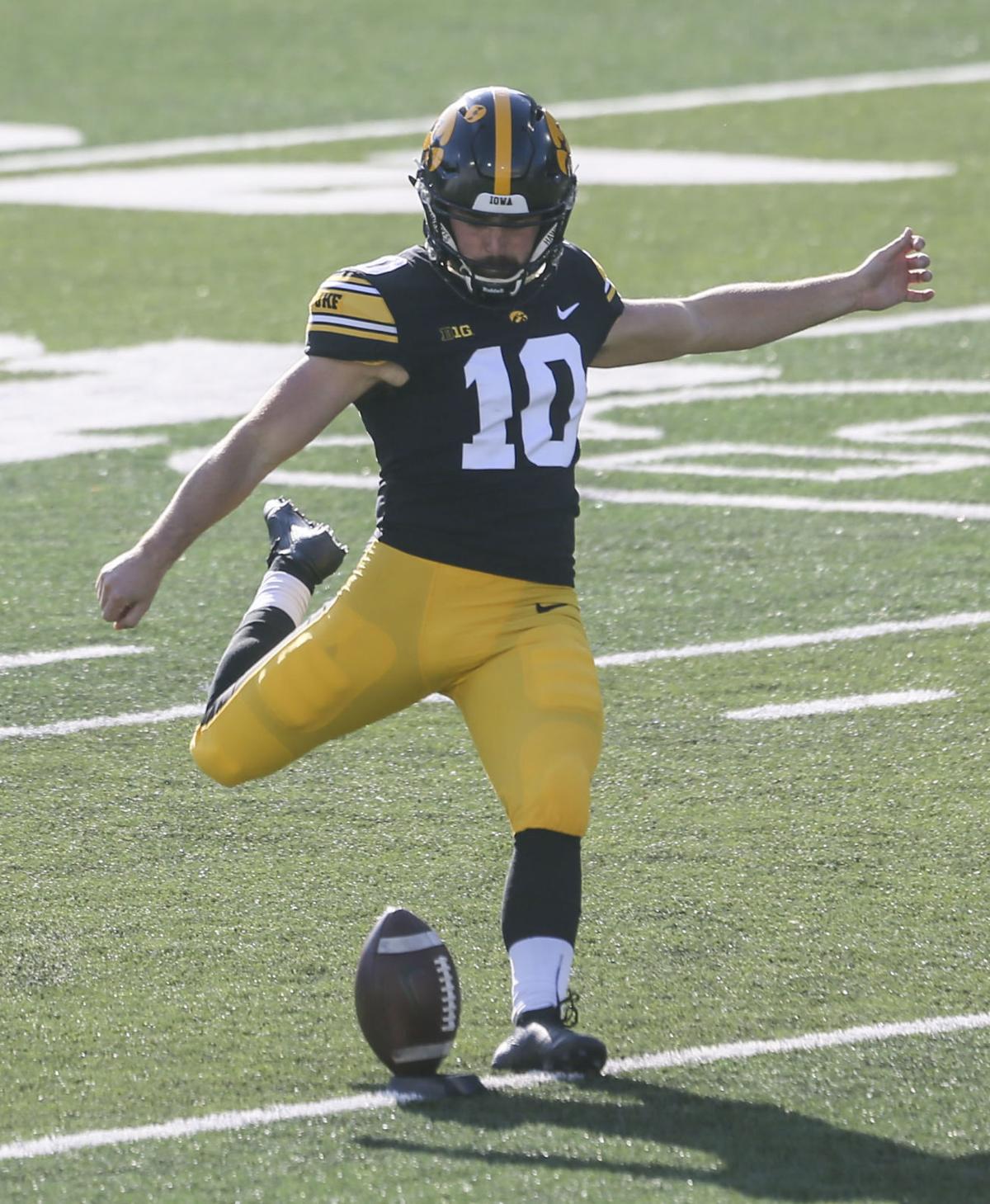 Iowa's Caleb Shudak kicks off during the Hawkeyes' game against Northwestern at Kinnick Stadium last season.

IOWA CITY — An ornery crosswind or an aggressive opponent isn’t the biggest concern patient Iowa kicker Caleb Shudak is dealing with these days.

The biggest challenge for the Hawkeyes’ sixth-year senior and first-year starting placekicker faces is figuring out how to put the student part of student-athlete in place before the fall semester begins.

Shudak has been on the Dean’s List and President’s List and is a four-time academic all-Big Ten selection during his time at Iowa.

It’s figuring out what avenue to pursue next that he’s putting some thought to right now.

"I’ve had a lot of schooling," Shudak said.

He earned his undergraduate degree in civil and environmental engineering a year ago and this week will complete work on a master’s degree.

"Technically, right now I’m an undecided undergrad for the fall," Shudak said. "I’ve got to figure out what to do, how to fill my scheduling."

Shudak also has to prepare for something he has waited six years for — an opportunity to be the Hawkeyes’ placekicker.

A five-year understudy to Keith Duncan and Miguel Recinos, the 2016 walk-on from Council Bluffs Lewis Central is finally positioned to step into a starting role.

Given the opportunity to have an additional year of eligibility because of how the COVID-19 pandemic impacted the 2020 season, Shudak jumped at the chance after Duncan chose to call it a Hawkeye career.

"You put in all those years of work, it’s one of those things where you have this opportunity right now. It’s there, so why not take it?" Shudak said.

"It’s not going to hurt anything doing it. I have great friends here at Iowa, the coaches are amazing. It was kind of a no-brainer."

Starting long snapper Austin Spiewak also was among players who walked on at Iowa in the fall of 2016. After handling all deep snaps for the first time in 2020 he chose to return for an additional season as well.

He also happens to be Shudak’s roommate.

"We’re in it together," Shudak said. "We made the decision to come back together and we’re anxious to make the most of it."

Shudak’s abilities as a kicker and the consistency displayed by Spiewak as a snapper are among reasons coach Kirk Ferentz isn’t losing any sleep over that segment of the game as Iowa works toward the 2021 season.

Ferentz praises the focus Shudak demonstrates on a daily basis, reflected in how he has handled kickoff duties over the past two seasons for the Hawkeyes.

He recorded 31 touchbacks in 75 kickoffs in 2019, averaging 58.2 yards per kick, and followed that with 30 touchbacks in 51 attempts over eight games in the shortened 2020 season while averaging 60.6 yards.

Shudak has attempted one field goal for Iowa, rattling a 52-yard attempt off of the right upright in last season’s game against Northwestern.

"He could have been the starter for the last two years," Ferentz said. "We’ve watched him every day in practice. It’s one thing the way he performs. It’s another thing how he’s wired mentally. He’s a really tough guy, focused."

Shudak said with a game on the line, he would be comfortable attempting field goals from 58-to-60 yards.

"I’d like to think we could make those happen if needed," Shudak said.

Mostly, the objective centers on one main goal.

"I’m striving for perfection. That’s what it is about every day, every practice," Shudak said. "I want to be the best kicker I can be."

He has shown a considerable amount of patience waiting for his chance to make that happen.

Duncan emerged as the team’s starter in 2016, only to be replaced by Recinos the following two years before Duncan returned to the role in 2019 and earned consensus all-American honors as a junior.

As Duncan completed his career last fall fourth on Iowa’s all-time field goal list and sixth in scoring in the program’s history, Shudak continued to prepare.

He believes a steady progression of growth has readied him for his next assignment as a starter this fall.

"When I go back and look at film from when I was a freshman, I see now how much I had to learn," Shudak said. "It’s a little humbling, to know now what I thought I knew then. But, I’ve worked hard at it to become better, and I feel like I’m ready for next season."

The work continues in some respects.

Shudak said he is working to become more of a vocal leader, something he said Duncan did exceptionally well.

"That’s not necessarily my personality, but I’m working to get better at it and it’s something I’ll need to do," he said. "I want to help lead this team, and I’m preparing to do that."

Dozens of former Michigan football players and other students who say they were sexually assaulted by Dr. Robert Anderson will hold a news conference outside Michigan Stadium on Wednesday morning to demand action from the school's leadership.

Iowa's first Big Ten road game of the 2021 season will now be played on a Friday night.

Iowa's Caleb Shudak (10) kicks off against Wisconsin during a game last season in Iowa City. Shudak will be taking over the place kicking duties from the graduated Keith Duncan next season.

Iowa's Caleb Shudak kicks off during the Hawkeyes' game against Northwestern at Kinnick Stadium last season.