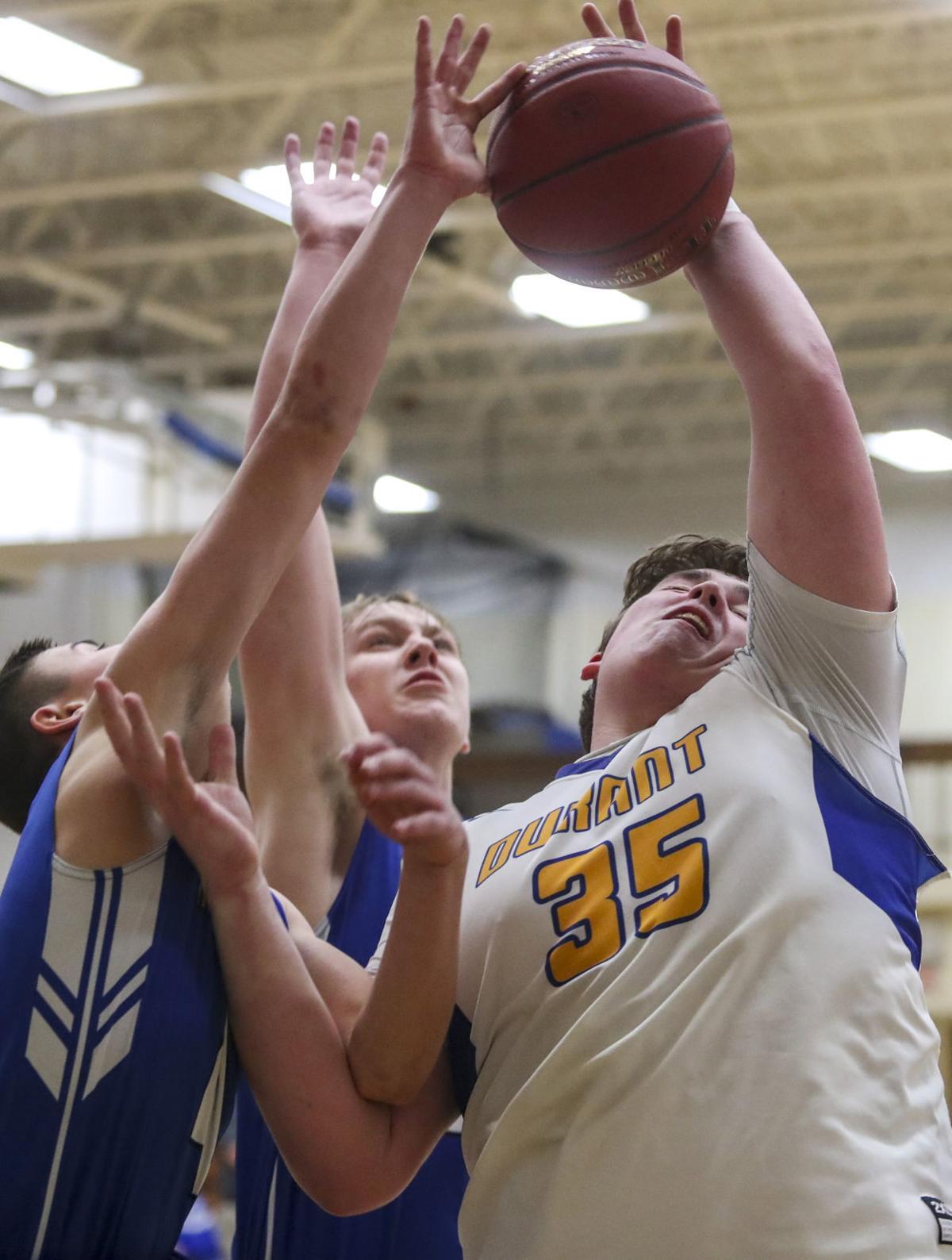 Durant's Joe Lilienthal (35) reaches up for a rebound during the fourth quarter of their game at Durant High School, Tuesday, Jan. 15, 2019. 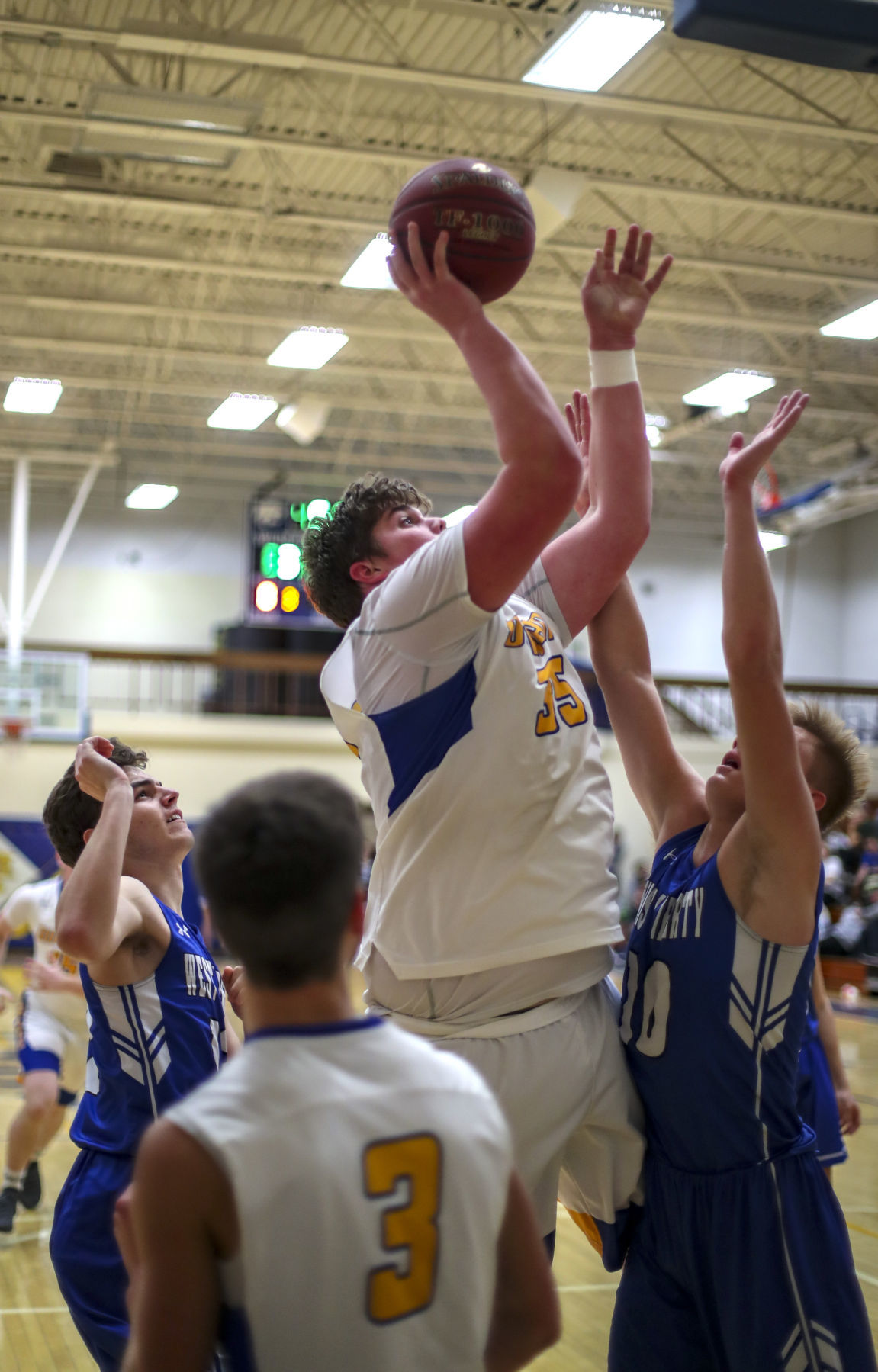 Durant's Joe Lilienthal (35) takes a shot during the fourth quarter of their game at Durant High School, Tuesday, Jan. 15, 2019.

DURANT, Iowa — Durant senior Joe Lilienthal's future is in football and on the farm.

It was basketball, however, that was his first love as far as spots go.

For his final act on the basketball court, the Wildcats’ 6-foot-7, 300-pound big man led Durant to a 10-13 record, the only area boys team to reach double-digit wins.

"I always liked basketball a lot more than football until about two or three years ago. I've always loved playing basketball," Lilienthal said.

Lilienthal flirted with averaging a double-double. His final averages ended up at 14.1 points and seven rebounds per game, while also chipping in one block per contest as well. All were team-high marks for the Wildcats.

Being an offensive lineman, he’s no stranger to doing the little things that are hard to quantify but make life easier for his teammates.

The totality of his numbers and team-first attitude amount to the senior being the Muscatine Journal’s 2020 Player of the Year for the boys basketball season.

Like he does on the football field, Lilienthal would often clear the way for others. On the gridiron, it was protecting the quarterback and creating lanes for running backs. On the hardwood, it was boxing out so a teammate could grab a board or setting picks.

He also proved himself to be a willing and able passer, contributing 41 assists in 20 games.

Lilienthal had been committed to South Dakota for football, but ended up switching his commitment. He'll be attending Iowa State to play football as a preferred walk-on.

"I loved everything about South Dakota," the Wildcat senior said. "They just didn't have the major I was looking for. I want to come back and farm with my dad and my brother, and (South Dakota) didn't offer anything with agriculture.

"I've grown up an Iowa State fan and obviously they have one of the best agriculture schools in the country, so that was big for me."

While it may have been tempting for some Division I-level recruits to eschew other sports to focus on the sports they’ll be playing at the next level, Liliethal never considered skipping out on the basketball season. It was as simple as feeling a sense of loyalty to his teammates and coaches, his school and the sport.

"I grew up thinking I was going to play basketball in college," Lilienthal said. "I played AAU during the summer.

"This group of seniors, we grew up playing together. I think we started in second grade. That helped us gel, we knew what everyone's strengths were, we developed a lot of chemistry as we grew up."

Although things did clash a couple times, Durant head coach Matt Straube knew it was important for "Big Joe" to focus and get ready for his next step in football.

"If kids know they're going to be playing another sport (in college) and they decide not to go out with other sports, you have to respect that," Staube said. "But that was never anything to my knowledge Joe ever seriously entertained. We did have to work around some football stuff this year. He missed the first full week of practice (for a football all-star game). We knew football was his first priority ... but we had him on the court and he gave us everything he had."

To his credit, even though football took him away from the Wildcat basketball team for a short period, Lilienthal kept hurrying back to join the team.

Over the years, Straube witnessed Liliethal go from relying on his size to being a well-rounded basketball player, unleashing more and more nuanced skills as opposed to just playing bully-ball by virtue of being the biggest player on the court.

"He really started to figure things out the last five games or so of his junior year," Straube said. "I thought he really turned into a dominant force for us ... and then this year it was easy for him. He's always had the talent, but this year he was our focal point and he handled it very well."

That development came in handy when Durant would occasionally run into teams that had personnel to match the Wildcat big man.

"Over the past couple years he's developed into his body," Straube said. "In middle school, he was able to dominate because he was so much bigger. Once he got into high school — there aren't a lot of teams with kids his size — but he'd run into them occasionally and he really figured out how to stay effective. There aren't too many kids that can guard him one-on-one."

Durant's Joe Lilienthal (35) reaches up for a rebound during the fourth quarter of their game at Durant High School, Tuesday, Jan. 15, 2019.

Durant's Joe Lilienthal (35) takes a shot during the fourth quarter of their game at Durant High School, Tuesday, Jan. 15, 2019.