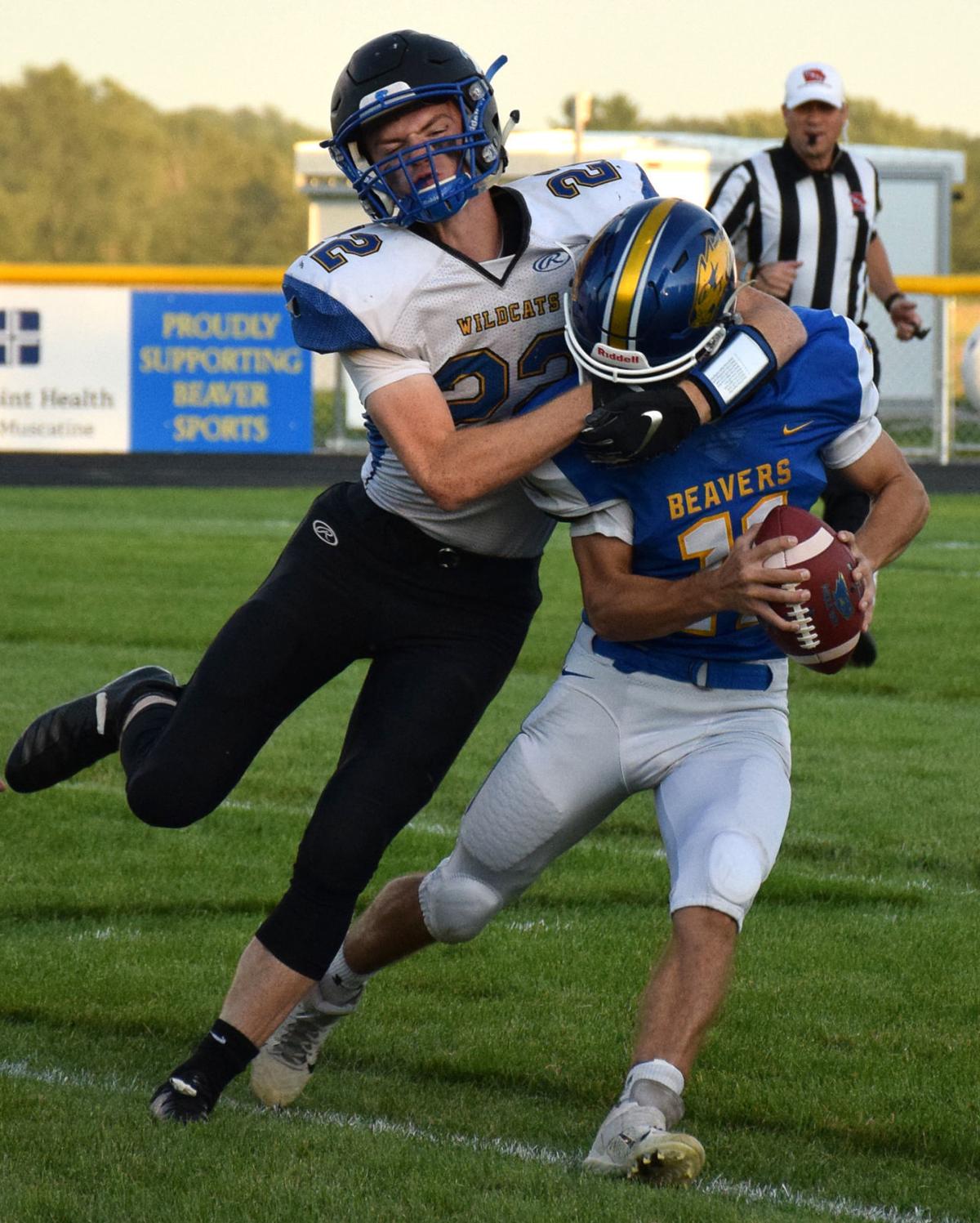 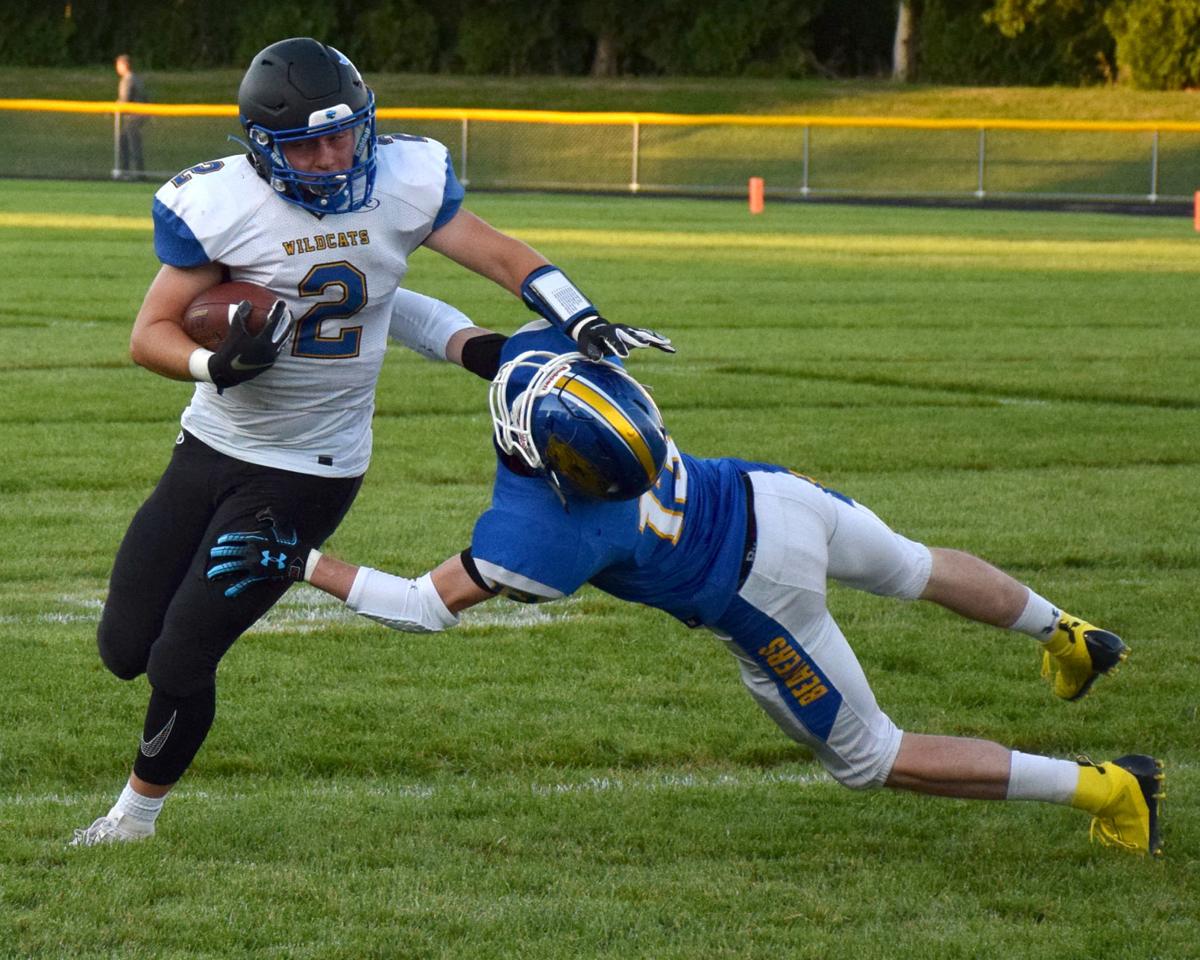 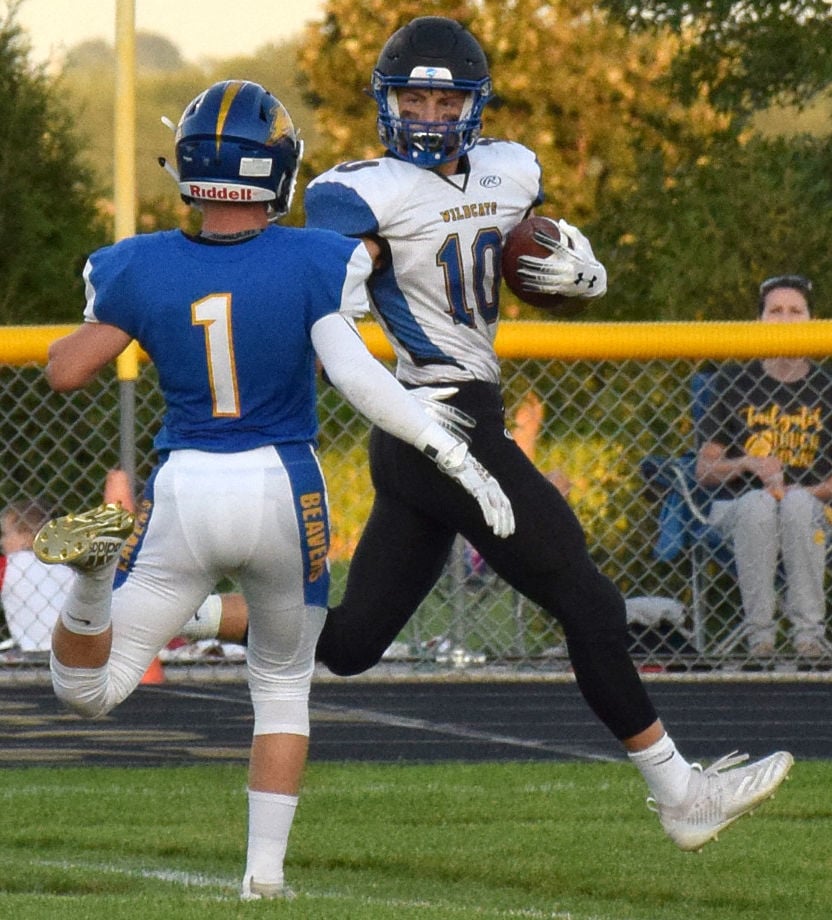 Durant's Nolan DeLong scores a touchdown in front of Wilton's Kael Brisker in the first quarter Friday at Wilton High School. DeLong, a freshman, finished the game with 185 all-purpose yards in his first career game. 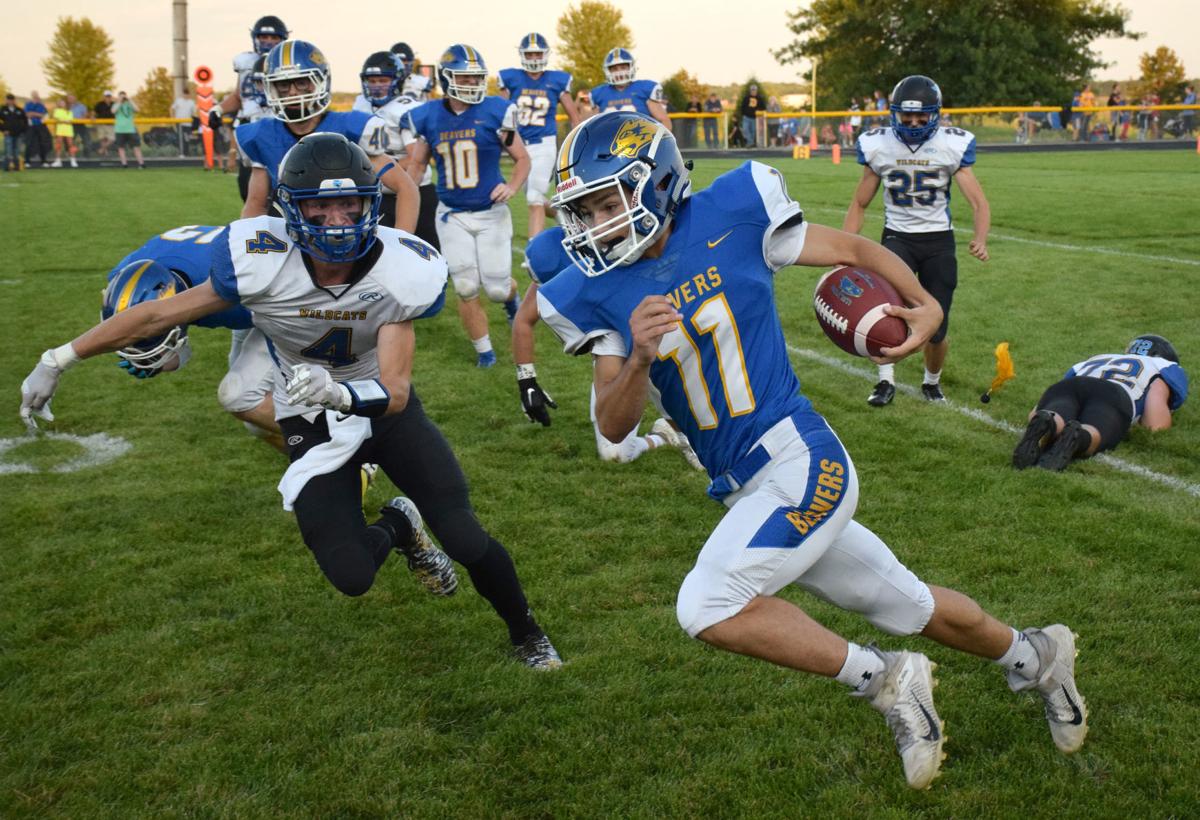 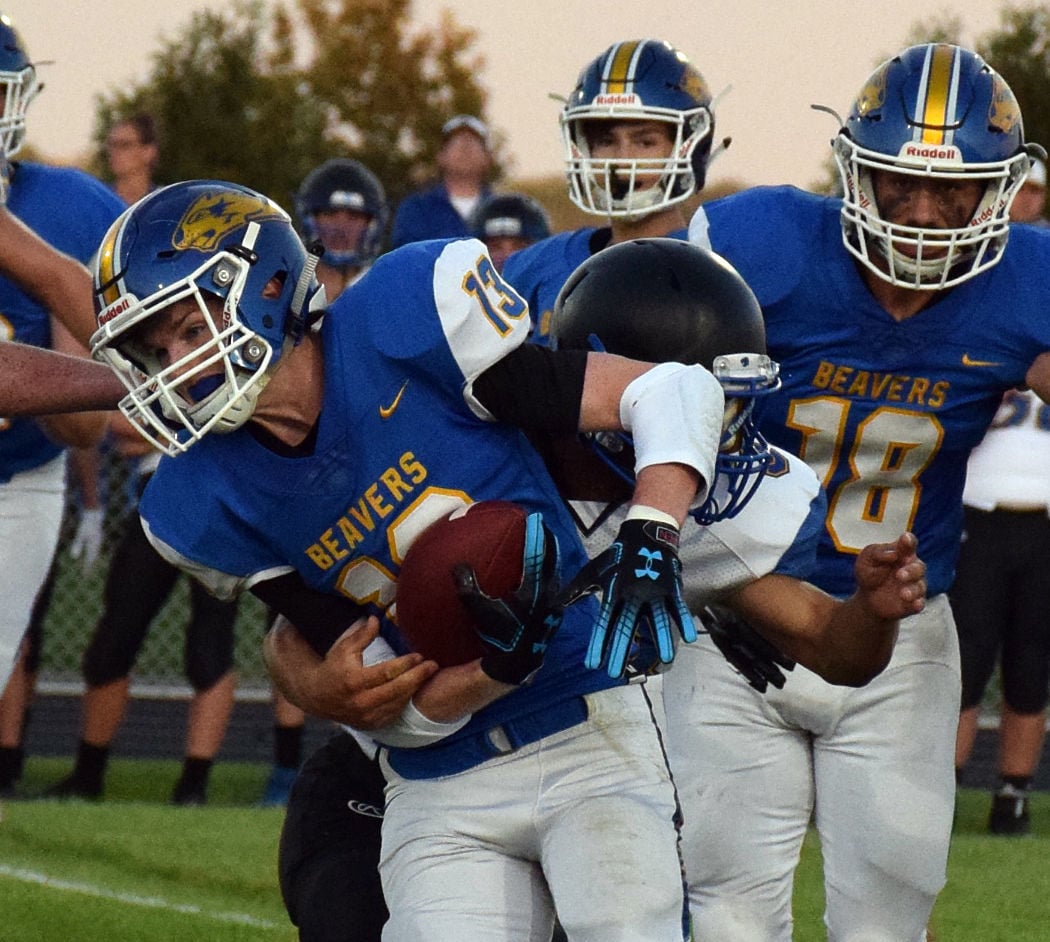 Wilton's Colby Sawvell (13) slips a tackle attempt from Durant's Tevin Miler during a game Friday at Wilton High School. The Wildcats beat the Beavers for the first time since 1999. 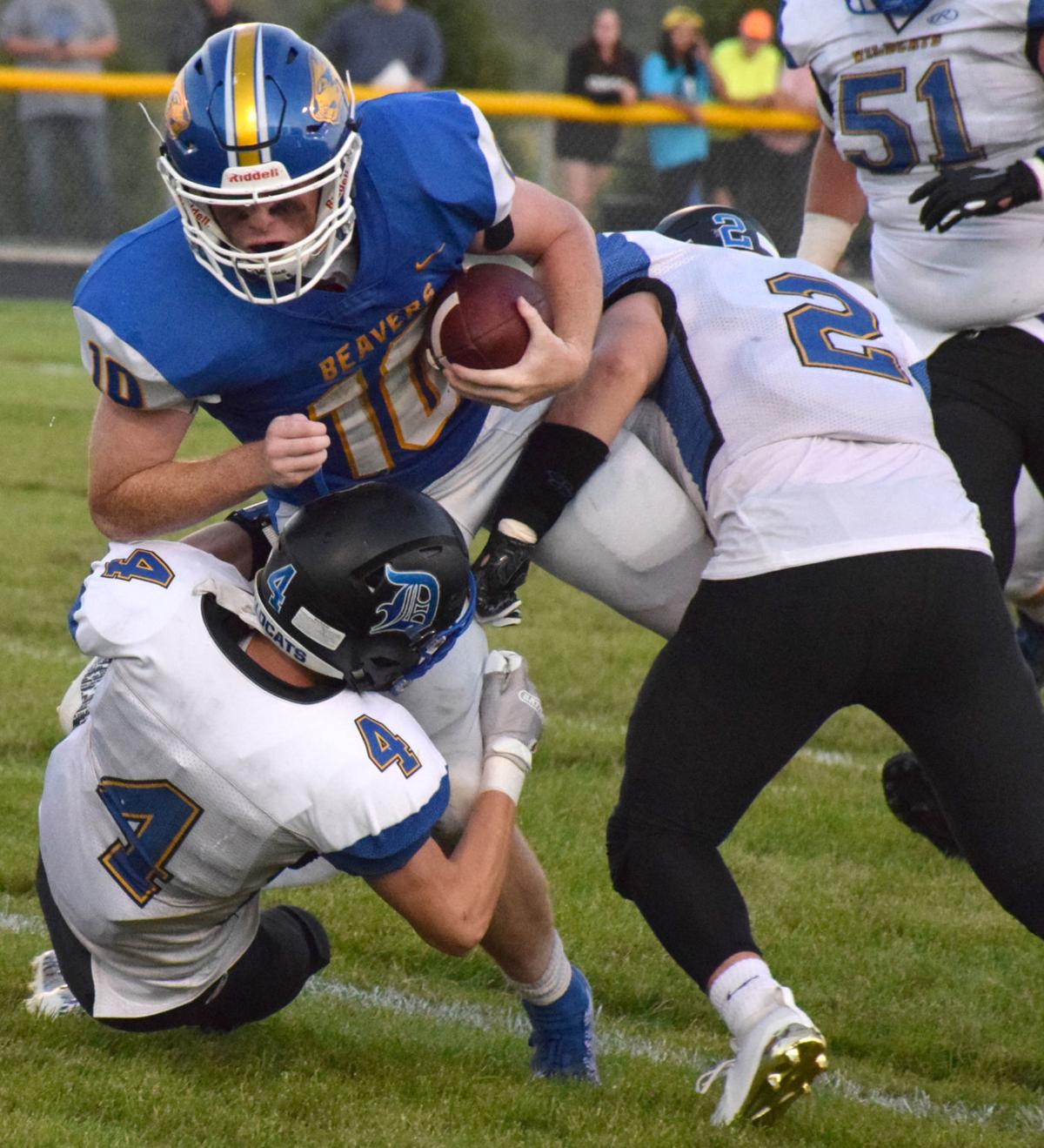 Wilton's Jackson Hull is tackled by Durant's Drew DeLong and Jake Willkomm during a game Friday at Wilton High School. 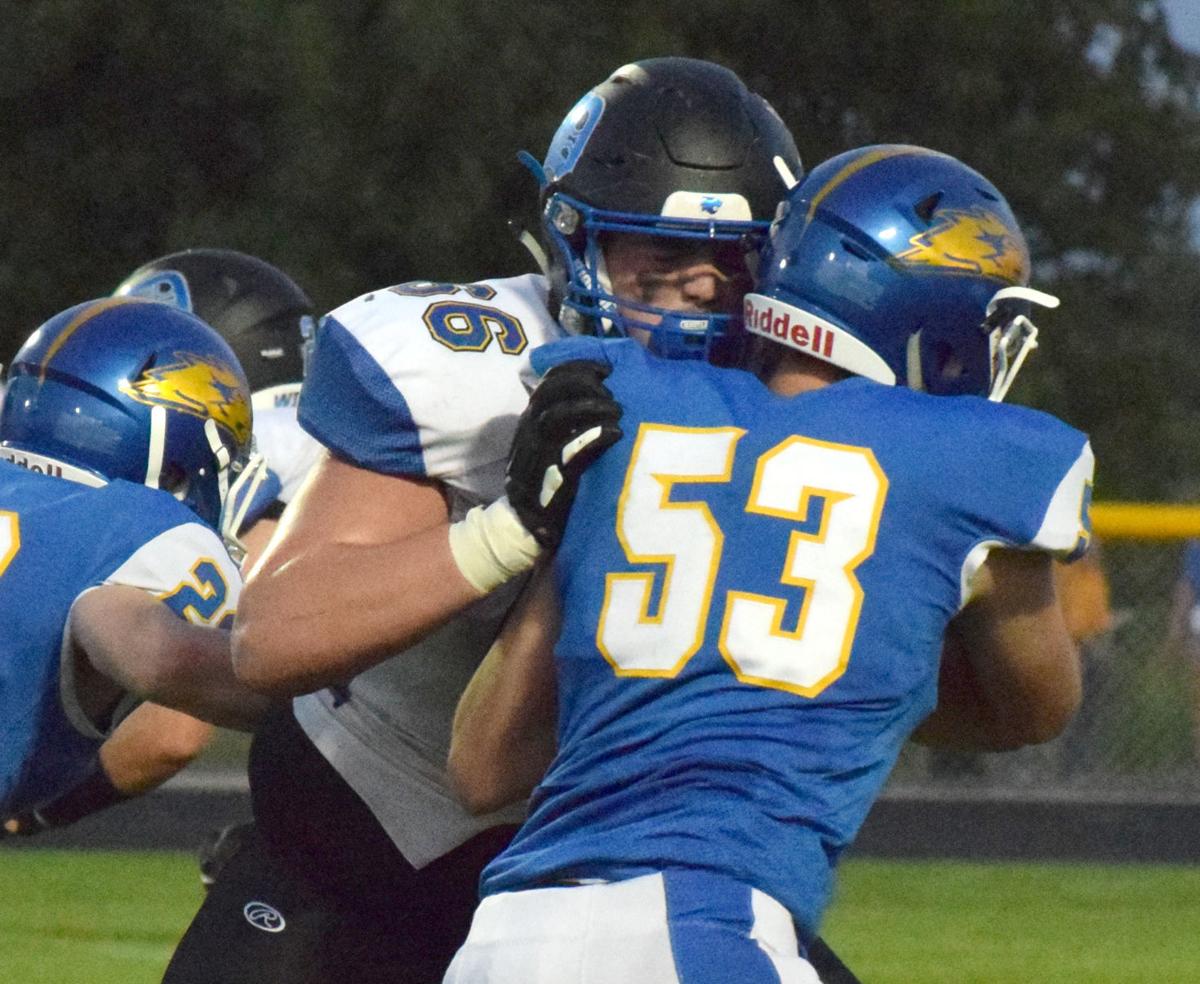 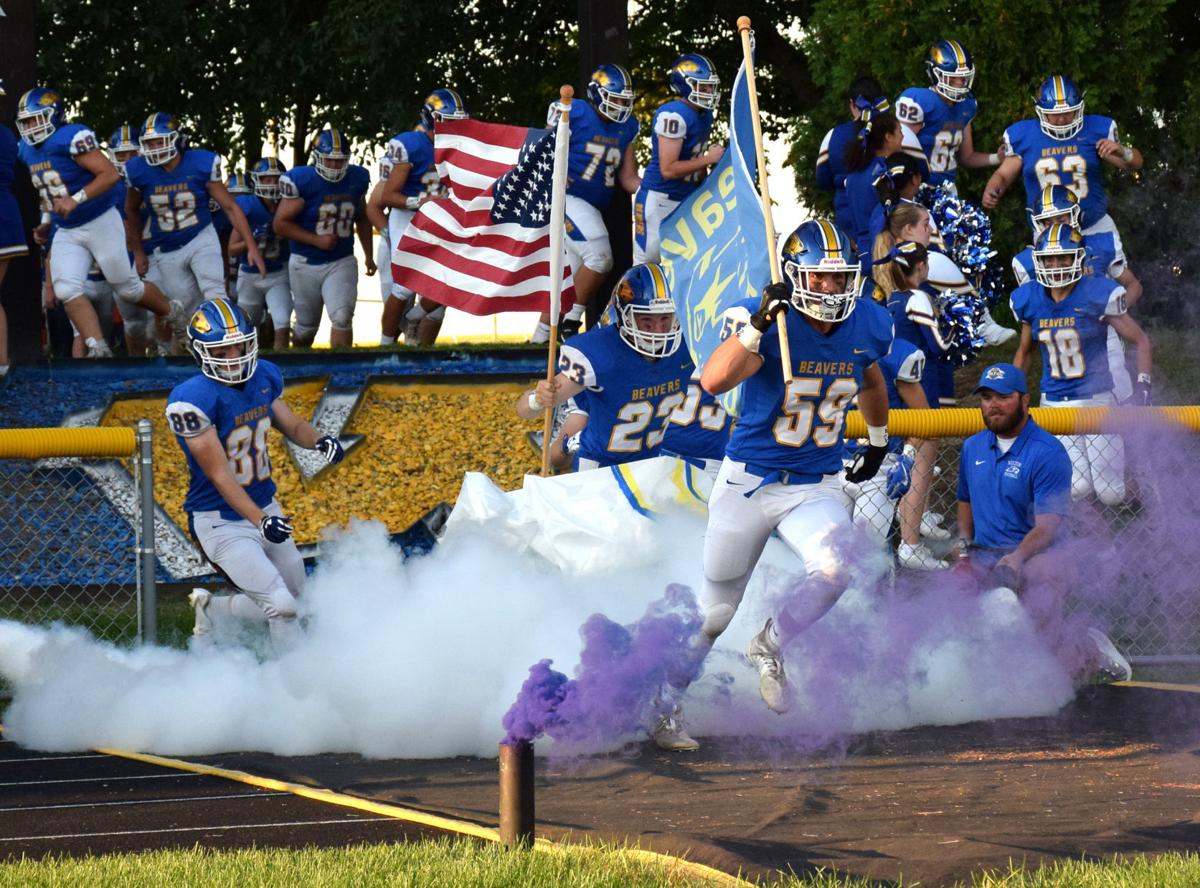 Wilton football players run onto the field prior to their game against Durant earlier this season at Wilton High School.

WILTON, Iowa -- Twenty years is a long time to wait.

The Durant Wildcats made up for those two decades of futility against the Wilton Beavers, rushing for 309 yards and rolling to a 24-0 win over their Highway 6 neighbors.

It's the first win for the Wildcats in the rivalry since 1999.

"It means a whole bunch," senior running back Drew DeLong said. "I've been here and there have been some good teams to come through Wilton. This team is nothing less and it's a great feeling."

It was a special night for all the seniors, but especially for DeLong, who rushed for 92 yards and also got to witness a coming out party for his freshman brother Nolan.

Nolan caught the game's first touchdown, taking a short pass from Keagan Head 27 yards for the score at the 8-minute, 33-second mark of the first quarter. He didn't stop there, rushing for 158 yards on 14 carries and making several plays on defense.

"It feels good," Nolan said. "I'm just glad my brother got to be a part of this while he was still in high school. (This year's) going to be fun."

The DeLongs give Durant (1-0) a great combination in the backfield, helping the Wildcats overcome the loss of several skill players from last year's playoff team. It doesn't look like there will be too much of a drop-off as Keagan Head threw another touchdown pass — a 33-yard strike to Jake Willkomm in the third quarter to up Durant's lead to 18-0 — and rushed for a score in the fourth quarter.

"A lot of it goes to the line, they played really well," Drew said. "Holes, wide open, I would go one way, Nolan would go the other and he'd get the ball and wide open, holes, perfect. All credit goes to them."

While the offense showed plenty of potential moving forward, the defense also made its impact.

After DeLong's touchdown in the first quarter, the Wildcats doubled their lead 75 seconds later with their defense. Wilton (0-1) quarterback Mason Ormsby's attempted throwaway was intercepted by Tevin Miller, who cruised 44 yards to the end zone for the touchdown.

Despite the slow start, the Beavers had a chance to get on the board, driving down inside the Durant 5-yard line before a false start penalty on 4th and 2 pushed Wilton back and the Beavers failed to convert.

Penalties were an issues all night for both teams, but it particularly plagued Wilton as the Beavers committed 13 penalties, two of which gave Durant a fresh set of downs.

"We talked to them before the game and said the team that has the most penalties would lose the game," Wilton head coach Ryan Hetzler said as Durant committed 11 penalties for 95 yards. "I can promise you we won that category. ...  With the youth and inexperience we have on the field already, it's just not going to happen and that showed tonight. But we also said after the game that every mistake is fixable."

Durant also had its fair share of miscues, twice driving the ball inside the Wilton 5 in the second quarter but coming away with no points, a failed fourth down conversion and a fumble on the goal line nixing their plans.

But the Wildcats will live with those given the end result.

"These kids care very much and they came out tonight, we left some points on the board but they actually executed and played hard," Durant head coach Joel Diederichs said. "I'm proud for these seniors."

The streak now over, Wilton will have to turn the page before heading to play Northeast next week. Ormsby finished with 58 yards passing and 19 rushing in his first varsity start and Jackson Hull led the team with 46 yards on the ground.

"Tonight was not our night and it showed early," Hetzler said. "Our guys took it to heart, though. I think our seniors especially feel like they let our program down but they didn't do that. It was not a letdown, they just got outplayed tonight."

Durant's Nolan DeLong scores a touchdown in front of Wilton's Kael Brisker in the first quarter Friday at Wilton High School. DeLong, a freshman, finished the game with 185 all-purpose yards in his first career game.

Wilton's Colby Sawvell (13) slips a tackle attempt from Durant's Tevin Miler during a game Friday at Wilton High School. The Wildcats beat the Beavers for the first time since 1999.

Wilton's Jackson Hull is tackled by Durant's Drew DeLong and Jake Willkomm during a game Friday at Wilton High School.

Wilton football players run onto the field prior to their game against Durant earlier this season at Wilton High School.