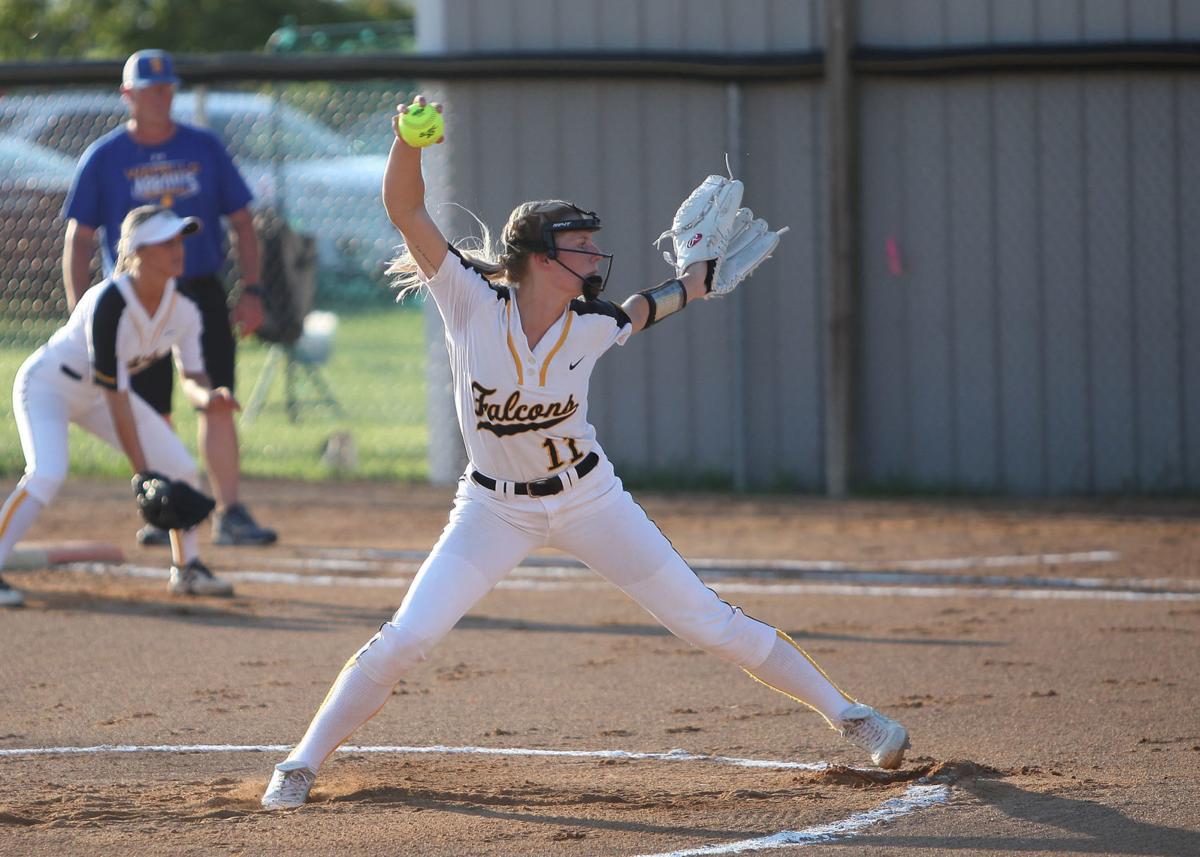 Louisa-Muscatine's Hailey Sanders fires a strike during the first inning of the Falcons' Thursday home game against Wapello.

Louisa-Muscatine's Kylee Sanders drives the ball into left field for an RBI single during the second inning of Thursday's game against Wapello. 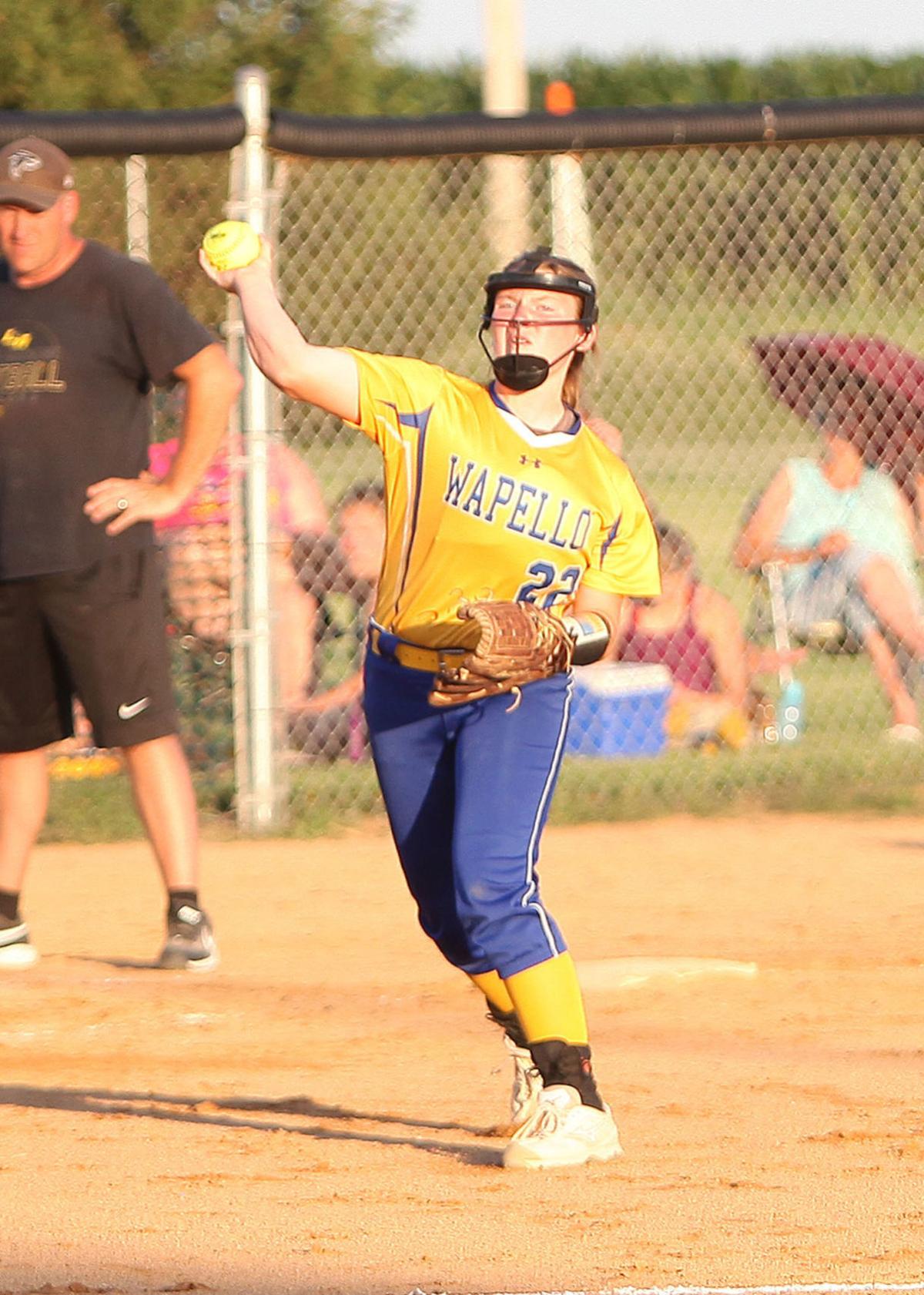 Wapello's Tatum Wolford fields a grounder and throws to first for the out during the third inning of Thursday's game at Louisa-Muscatine.

LETTS, Iowa — For a team that has aspirations of going to their third straight state tournament, winning the Southeast Iowa Super Conference North division might not be of the utmost importance, but it’s certainly a sign that things are trending in the right direction.

And winning the SEISC North is exactly what the Louisa-Muscatine softball team did Thursday night in Letts.

Wapello, which came in second behind L-M in the standings, faced a tall task with the Falcons throwing their senior ace Hailey Sanders and the Arrows missing standout sophomore shortstop Serah Shafer as she continues to work back from a concussion.

It took an inning for things to heat up, but in the end, the combination of Louisa-Muscatine’s offensive versatility and Sanders’ pitching — with a sturdy defense behind her — proved too much for Wapello, as the Falcons claimed victory in the fifth inning when a Sanders RBI double put the Falcons up 10-0 to end it.

In the early going, L-M, the second-ranked team in Class 2A, had to scrabble a bit for baserunners. Senior Beth Butler reached on an Arrow error to start the Falcon second, then junior Mae Cox walked and junior Mallory Mashek reached when a fielder’s choice went awry for Wapello to load the bases.

Wapello got the first out of the inning at the expense of a run, but then the top of the order came up for the Falcons. Junior Kylee Sanders and sophomore McKenna Hohenadel each collected RBI singles and sophomore Brynn Jeamby sent a shot down the left field line that looked at first like a potential grand slam but hit the outfield wall, resulting in a two-RBI double, putting L-M up 5-0 after two.

“What I like about our team is that we don’t get down,” Louisa-Muscatine head coach Bryan Butler said. “Sometimes you can it in your head that ‘Oh boy, we didn’t score this inning,’ but they just go there and anywhere in our lineup, we can start a rally, and they proved that tonight against a good team.

“I was really happy with how we performed. … It just seems like that last three or four games, we’ve been seeing the ball really well as a team, which makes it really fun.”

Though the Falcons (12-1, 7-0 SEISC) obtained the rather lopsided win, Wapello (9-5, 5-2 SEISC) buckled down over the next couple innings but was hurt by a lack of offense. But they did get Sanders deeper into counts than some other SEISC opponents have throughout this season.

“I thought there were a lot of positives for us (tonight),” Wapello head coach Ashley Hahnbaum said. “We were upbeat, ready to go, and that’s about all I can ask for.”

Hailey Sanders went into Thursday night with a splendid 0.47 ERA over 45 innings worked. Five more innings of scoreless ball will only make that number drop further.

Kylee Sanders, who like Hailey is committed to the UNI softball program, ended the night with two base hits, two runs scored and two RBIs while Hailey went 2-for-3 with a walk, a run scored and the RBI that won it as part of a four-run fifth for the Falcons.

“I’m having a really good year at the plate, so I’m really happy about that,” Hailey Sanders said. “I can help the team and myself in the circle rather than having to rely on my teammates (for offense.”

In Class 3A, Columbus will play top seed Davenport Assumption on July 15 in Region 8 and on the other side of the bracket, West Liberty will be at home for Camanche.

Muscatine will open at Kent-Stein field to play Linn-Mar in Class 5A Region 8 on July 18.

Louisa-Muscatine's Hailey Sanders fires a strike during the first inning of the Falcons' Thursday home game against Wapello.

Louisa-Muscatine's Kylee Sanders drives the ball into left field for an RBI single during the second inning of Thursday's game against Wapello.

Wapello's Tatum Wolford fields a grounder and throws to first for the out during the third inning of Thursday's game at Louisa-Muscatine.