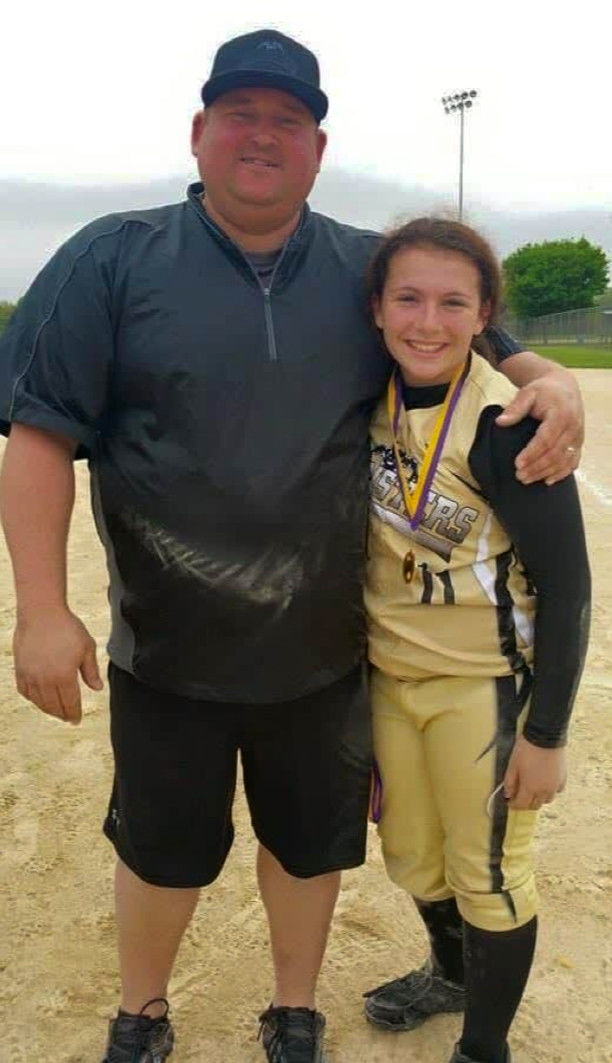 Jarin "Bear" Gerst poses with his daughter, Rylie, after one of Rylie's softball tournaments that Jarin coached. 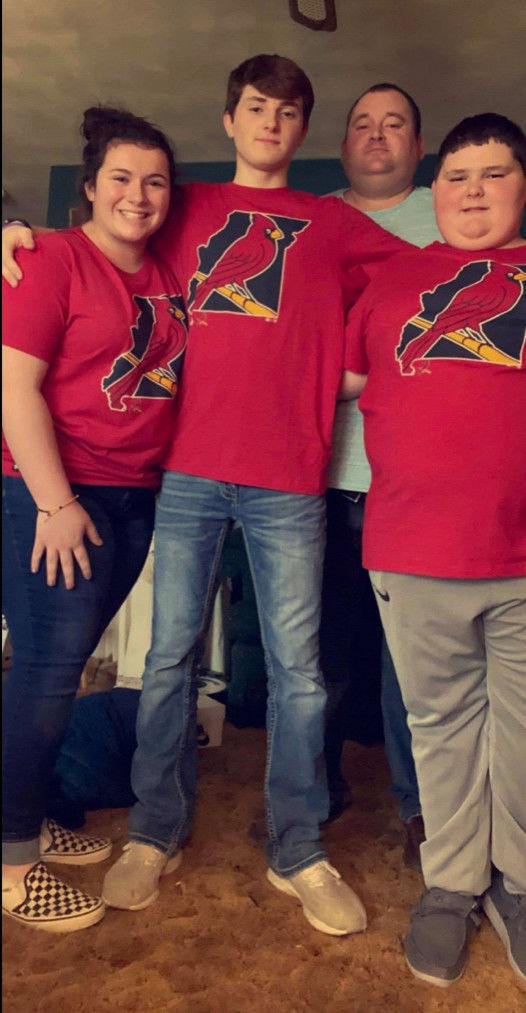 Jarin Gerst with three of his four children. From left: Riley, Lucas and Parker.

The freshman was happy and proud of what the Muskies, ranked eighth in Class 5A, had just accomplished. The team had just pulled off a lopsided 14-3 victory in five innings to secure its first state berth in seven years.

But the situation in the Muskie dugout was much more complicated, as if someone had taken a sampling of every emotional state imaginable and put them in a paint can, and all the colors mixed together to a catatonic gray.

Securing a trip to Fort Dodge wasn’t exactly of paramount importance for the first baseman at the time. Haag’s former youth coach, Jarin “Bear” Gerst, however, was.

“It’s been kind of hard, just knowing that he wasn’t here,” an emotional Haag said. “But other than that, it’s been really exciting.”

“He always told me to never take the game of softball for granted,” Muscatine sophomore Karly Ricketts said. “He said to always play as hard as you can because someday, when you’re older … you’ll regret not playing as hard as you could have.”

Gerst’s four children — Parker, age 10; Lucas, 15; Rylie, 18 and Tyler, 24 — represent only a fraction of the people for whom he was looked upon as a father figure. Players from Muscatine, down to Burlington, in his native Wapello, and all across southeast Iowa made up his 16U Monsters teams.

“He was extremely passionate about the things and people he loved and taught me to be the same,” said Rylie, who played for her father’s traveling teams.

“He was more than a coach to me,” Muscatine freshman pitcher Maura Chalupa said. “He was like my best friend, we always had something in common. He would always be the first one to text me after every game and make sure I was okay when I was recovering from an injury.”

Jarin’s son Parker often sat in the dugout for games, on occasion he was allowed to “coach,” and became something of a younger brother for many players.

Gerst's impact is also immensely impactful among the players on a Louisa-Muscatine team that is heading to its third straight state tournament.

If one were none the wiser, it may appear as if the L-M softball squad dropped its Falcons moniker and rebranded itself the Louisa-Muscatine Bears in his honor. The team has added “Bear” decals to its batting helmets.

Coincidentally, putting new twists on old nicknames was a specialty of his.

Gerst balanced being a demanding coach on the field but a best friend or parent off of it, a special skill that only strengthened his relationship with his players.

“He was hard on me because he saw my potential far beyond what I thought,” Rylie Gerst said. “He loved the sport and loved each and every one of his players.”

Gerst could wear many hats -- coach, father, friend and comedian. Oftentimes, he'd wear a couple at the same time. He always knew which was the best fit for any given situation.

“He meant so much to (Hailey and I),” L-M junior Kylee Sanders said of her and her sister. “He’s been there for me ever since I was a kid.

"He was my first coach for both (basketball and softball), and taught me how to play both games and he taught my dad how to coach. We wouldn’t be the players we are today if it wasn’t for Bear.”

Gerst coached with Hailey and Kylee Sanders’ father, Luke, which led to a special bond between them.

“My dad was coaching before he started the Monsters … and he actually coached against Bear,” Hailey Sanders said. “That’s how they kind of started the Monsters program together, and Bear’s been by my side since Day 1. He grew to be one of my dad’s best friends, so it’s been really hard not to have him because we’ve all been so close.

“Other than my parents, Bear has watched me play the most. That’s just who he was, he would go to all of his girls’ games … he loved them like they were his own.”

His players became family, regardless.

“He was always there to support,” Hohendadel said. “Even if it wasn’t his school — he was from Wapello — he’d still come to L-M stuff and it meant a lot because he didn’t care so much about the player we became as much as the person we’d turn into.”

“We knew that he wasn’t just there for softball,” L-M sophomore Brynn Jeambey said. “It just showed that he wanted us to succeed in everything, not just softball.”

Among his players and people who knew him, there was no doubt Gerst's coaching ability was more than good enough to take him to bigger and better places, but his corner of Iowa youth softball was more than enough to satisfy him.

“Ever since I started playing with the Monsters, my coaches always decided to leave and go to other organizations or other programs,” Haag said. “But Bear was the one guy who would always step in and be there. He never left. He would even come support my little sisters and support them.”

“He could have easily gone on and coached at a bigger and better program,” Hailey Sanders said. “But he just stuck by my dad’s side, his players’ side, and never left.”

Signs ominous and hopeful as college sports hangs in balance

The announcements came within 40 minutes of each other Wednesday morning, one bleak, the other providing a glimmer of hope for a college footb…

Jarin "Bear" Gerst poses with his daughter, Rylie, after one of Rylie's softball tournaments that Jarin coached.

Jarin Gerst with three of his four children. From left: Riley, Lucas and Parker.