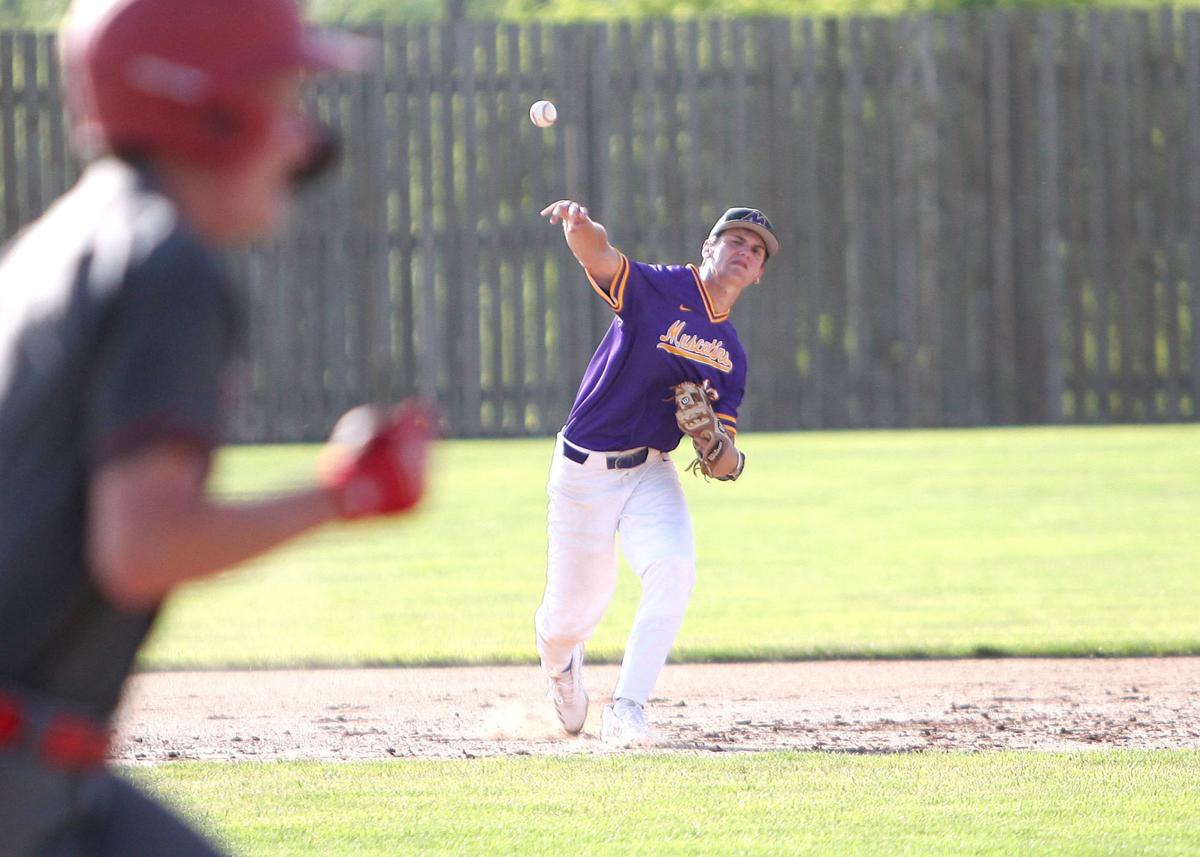 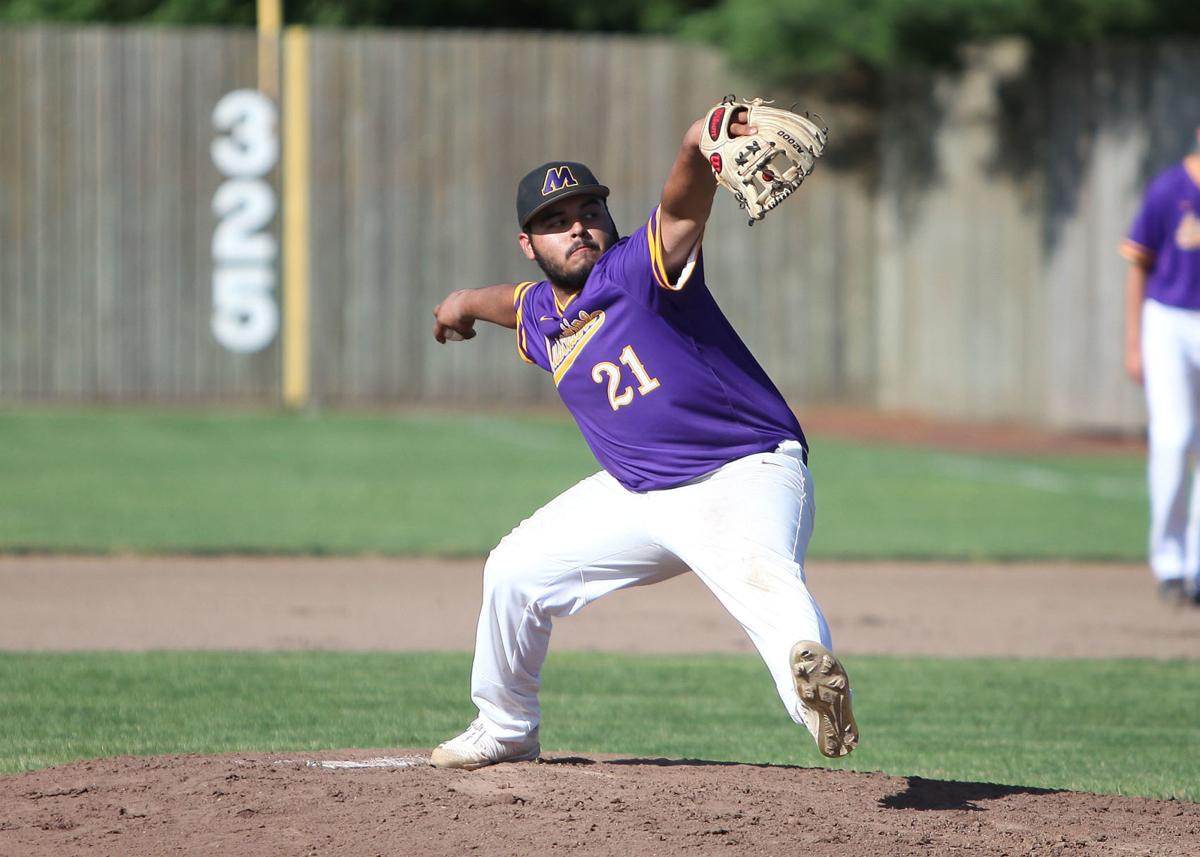 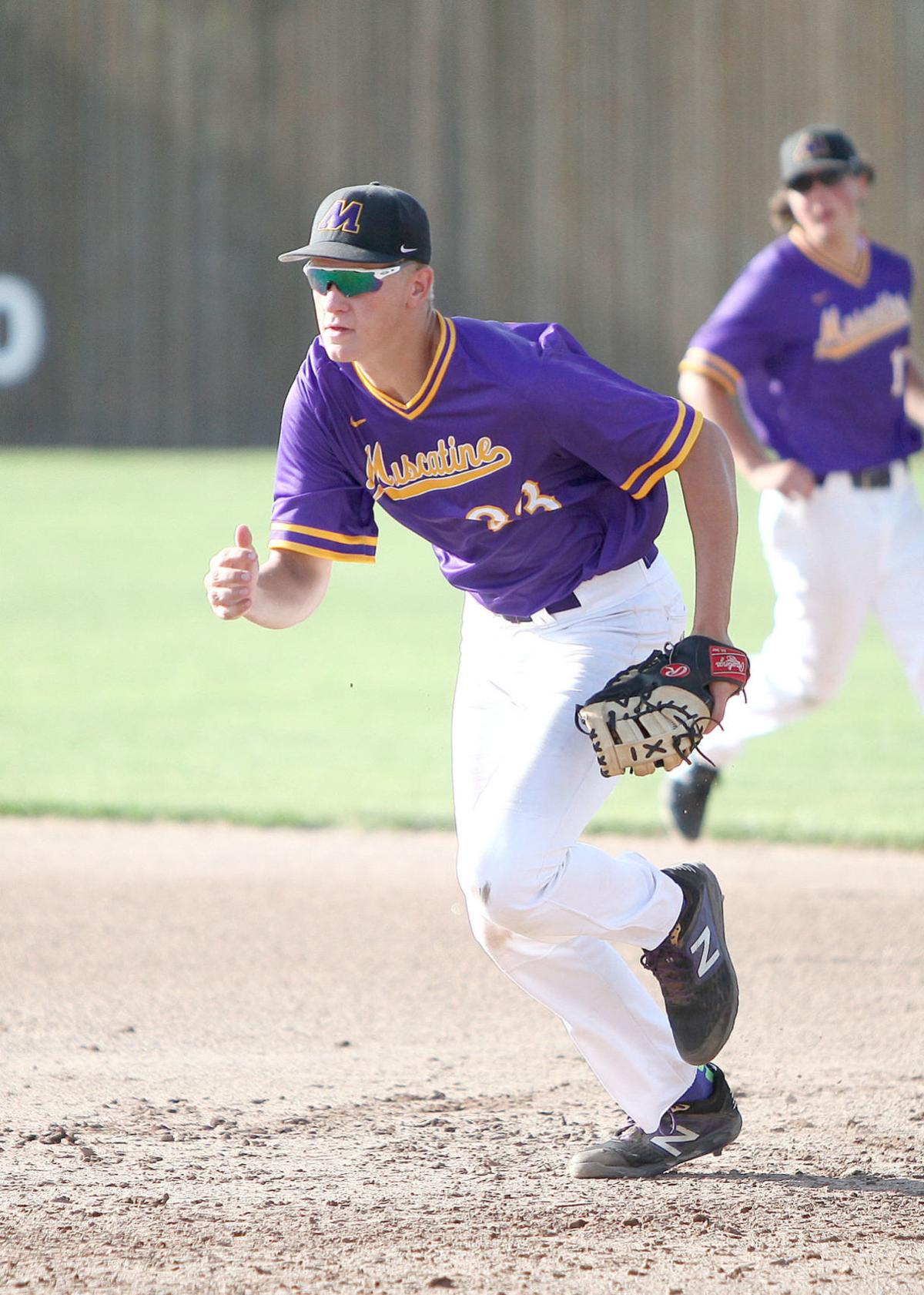 Muscatine's Josh Dieckman fields a grounder for an out during a doubleheader against Davenport West Monday at Tom Bruner Field.

The first inning proved problematic for the Muscatine baseball team on Monday evening.

Davenport West scored 12 runs in the opening inning of the first game of the doubleheader at Muscatine’s Tom Bruner Field. The Falcons then turned around and scored four to open the second game, which put the Muskies in a precarious situation all night.

Muscatine (2-8, 2-8 MAC) continued to battle, but the Muskies couldn't make up the difference in either contest, losing the opener 15-2 and the nightcap 15-0.

In the first game, 10 of West’s runs came with two outs. In the nightcap, the Muskies got Falcon leadoff hitter, junior Jackson Huffstutler, to ground out to the Muskie shortstop, but Muscatine surrendered four runs before recording the second out on West (6-3, 5-3 MAC).

“We had two outs (in the first inning of the first game), and then we made an error, and that turns into 10 more runs,” Muscatine head coach Grant Pippert said. “We have to toughen up. Somebody has to stop the bleeding, it just snowballs. … We’re close, but we’ll take two steps forward, one step back.”

Huffstutler was big for West in the first game, going 1-for-2 while drawing two walks and scoring three runs and a pair of RBIs.

Muscatine’s runs in the first game came on back-to-back at-bats. After junior Josh Dieckman singled, sophomore Jaimie Martinez drew a walk and senior Leo Garcia and junior Dalton Logel singled on consecutive trips to the plate, each getting an RBI.

Izaiah Schaeffer-Houston delivered the big shot for West in the early goings of Game 2. After senior Noah Downing was hit by a pitch, Schaeffer-Houston went opposite field for a two-run home run down the right field line. Junior Dominic DeLaPaz and sophomore Chance Dreyer also scored in the inning.

Coming in, the Muskies had already suffered some bad luck. In their meeting last Thursday against Clinton, a doubleheader split, Muscatine juniors Reed Ulses and Diego Rangel left with injuries. Ulses injured his thumb on a slide, Rangel suffered a shoulder sprain to throwing arm.

Both may miss the remainder of the season.

Rangel is Muscatine’s starting catcher, junior backup Caden Roberts was also out. And Game 2 starter, sophomore Douglas Custis, left after it appeared a ball hit him in the neck area underneath his mask, forcing him to leave. Sophomore Ethan Cantrell is one of the few Muskies on the roster left to catch.

“We’re on our third or fourth catcher, that’s really big,” Pippert said. “It’s just one of those things, we just have to be better. Nobody feels sorry for us, it’s part of the game … The good thing is, we truly have a good group of kids, the coaching staff is awesome. We’ll get there, I’m trying to be patient, but I hope we get there real soon.”

Outside of the first inning of both games, the Muskies played much cleaner. Those early innings were enough to cost them both games, however. And the Muskie offense didn’t do the club any favors, either. Muscatine had four hits in the opener and were no-hit for four innings of the second game.

Once Gustaf entered, Muscatine did get consecutive hits from sophomores Jaimie Martinez and Miles Melendez, but neither crossed the plate, ending the Muskie threat and the game.

“I think we’re doing the right things,” Pippert said. “Tomorrow we’ll come in, get back to work and hopefully get better, and that starts with me.”

College students around the world had their summer plans evaporate this year in the wake of the ongoing COVID-19 pandemic.

Quad-City Times Bix 7 Race Director Michelle Juehring: The pandemic is 'not stopping us'

Muscatine's Josh Dieckman fields a grounder for an out during a doubleheader against Davenport West Monday at Tom Bruner Field.