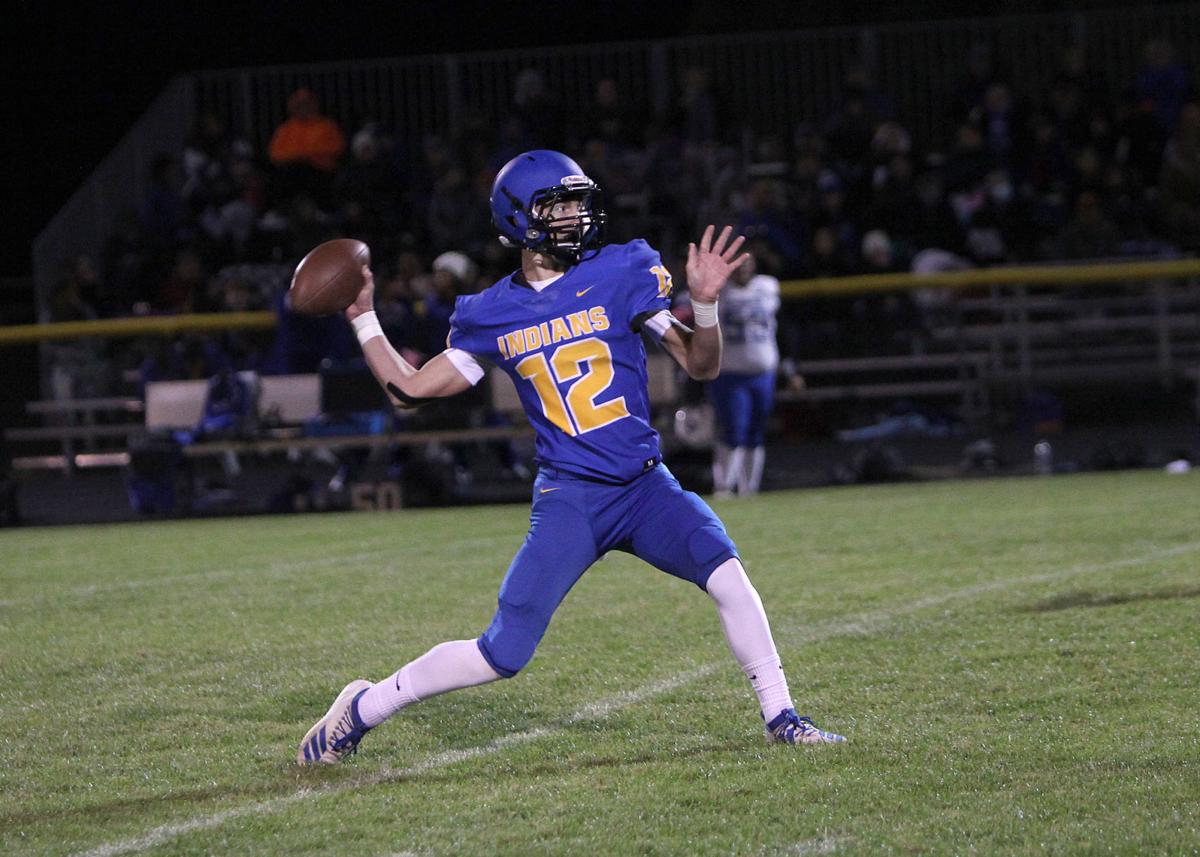 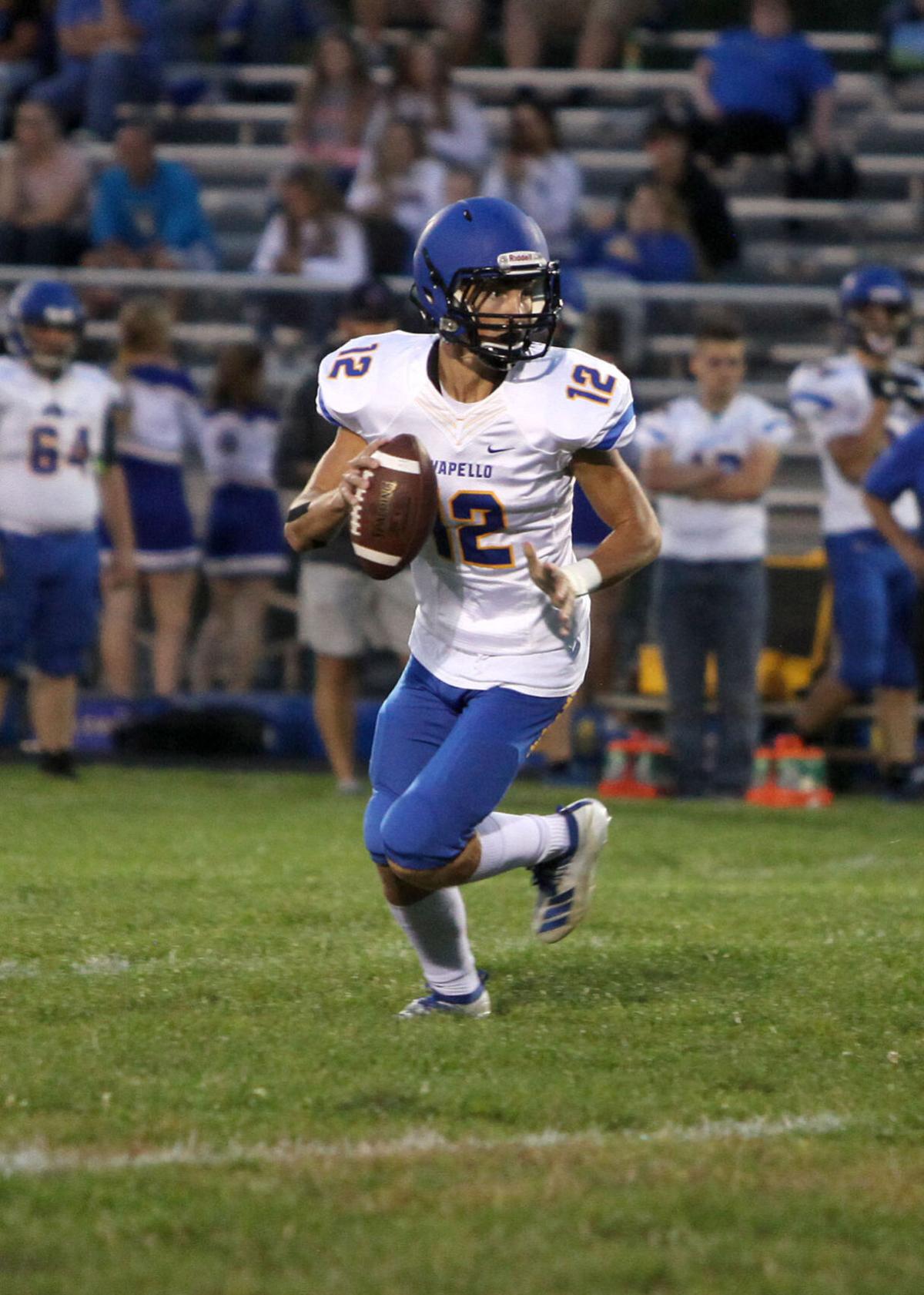 WAPELLO, Iowa — After spending a considerable amount of his life making sure he was prepared for his senior year of football, quarterback Tade Parsons wasn’t about to let a Week 1 loss spoil the Wapello High School football team’s season.

Since the Indians fell to Mediapolis, 44-22, in the season opener, Parsons and the Wapello offense have put up staggering numbers. The only thing stopping those from being even more impressive has been the Indian offense itself, as the jets have been cooled in the second half of Week 2’s 45-0 win at Louisa-Muscatine and a 56-21 victory over Columbus at home last Friday night.

Parsons' best statistical game came in the Week 1 loss, when he threw for 391 yards on 28 of 36 passing with two touchdown throws.

"I'm just focused on helping the team get wins," he said. "I'll look at the numbers a little bit, but I don't pay too much attention to it, because I'm moving on to the next week, the next opponent."

That sort of mentality has come with the territory for Parsons, as his father, Todd, is Wapello's head football coach.

"I love it, personally," the quarterback said.

This isn't Todd Parsons' first crack at coaching his kids, as he coached his older son, Taylor Jacobsmeier, who went on to play college football at Wartburg, as well as his daughter, Tiffany, as assistant girls basketball coach.

But for the coach, this season has become more about soaking it in.

"I'm probably harder on my own kids than everyone else, but we go home and talk about it. Especially since he's the last of my kids I'll coach, I'm just trying to enjoy it a little more. You never realize how special it is when you're going through it. When you're putting your kids in the best position possible to be successful and it's go, go, go, you can forget to sit back and enjoy it. It's over before you know it, things in life can be taken from you so fast that, as a coach, you're always worried about what's next. It's a privilege. I'm a very lucky guy to get to coach my kids."

Through three games, Wapello still hasn't thrown an interception, and he's rushed for 50 on eight attempts with an additional score on the ground.

But for as much as he has contributed to the success, the Wapello signal-caller credits the other side of the ball and the line in front of him.

"Our defense has improved a lot since the first game, we've been stuffing the run better," Parsons said. "And our (offensive) line has improved a bunch, that's been helping some of (our go-to plays) work better.

"Everyone has been improving and working on things in practice that we need to fix."

Parsons is now in his third season as the Indians starting quarterback, but it's perhaps his presence in the locker room and outside the lines where he's made the biggest strides.

"If you're the starting quarterback, you have to be a good leader," the senior said. "I've been working on being more vocal this year, making sure everyone is ready and encouraging them to do the best they can."

"I think he's matured as a person," Todd Parsons said. "He's set some goals for himself and he developed a plan to achieve those goals. He's really worked on areas of his life outside of athletics, which is paying dividends right now. He's got a clear goal, the motivation and discipline to stay focused.

"He knows that that's a key if you want to have a chance to compete at a high level (on the field)."

Though Wapello had to replace graduated all-state talents in Caden Thomas and Rhett Smith, another leap from junior running back Jake Gustison and good health have the Indians clicking on all cylinders.

Gustison leads Wapello in rushing and receiving yards. He went over 100 yards in both categories in Week 2 on nine grabs and 11 carries, then connected with Parsons a half-dozen times in Week 3 for 205 receiving yards.

The junior back stands at 387 yards receiving on 22 catches plus 153 yards on the ground on 24 tries, with eight total scores.

After an injury sidetracked wide receiver Maddox Griffin’s junior season, he’s been a bit of a revelation as a senior.

As the Wapello quarterback continues to add and fine-tune his game, it’s gotten to be not so much about getting the ball to his skill position players, but getting them the ball in spots to make plays.

And as COVID-19 played havoc on the globe over the past year, the father/son, coach/quarterback tandem stayed involved as much as possible to keep progressing and get some eyes on the quarterback.

"(My father) has taken me to summer camps, we talk about things I need to improve on when we're at home, and it's been great to have him around as a strength coach as well," Parsons said. "There's been some tense moments, it doesn't get too bad, it probably gets the worst during games ... But I just love the game, I love to compete."

Parsons is intent on playing at the next level, but is most likely waiting until the end of the season to evaluate all of his options.

"(The recruiting) process has been mostly good," he said. "I'll look at my offers toward the end of the season and make a decision."

Though three weeks is still a small sample, the schedule looks to be set up in Wapello’s favor. The only remaining opponent the Indians have left is 2-1 Lisbon.

Still unranked in Class A, Wapello may find its way into the AP rankings in short order, as the team did receive some votes in the last poll. And the remaining opponents on Wapello's schedule sport a combined record of 5-10 to this point in the season, with only Lisbon (2-1) on the winning side of .500. The Indians take on 0-3 Pekin this Friday on the road.

"I think the light came on after last year," Todd Parsons said. "He wasn't at the level he wanted to be at and put in a lot of extra time that people don't see or understand. I haven't had to motivate or push him to do that. He's decided to that."

Muskies' depth a source of optimism ahead of new season

The Muscatine High School boys swim team knew coming into the 2021-22 season that it lacked some experience.

3A No. 9 West Liberty blitzes Durant for dominant win

DURANT — While the West Liberty High School girls basketball team doesn't go very deep on the bench, the Comets still like to push the tempo.

Muskie boys basketball on mission to continue the climb

It's been a slow but steady climb back up the mountain for the Muscatine High School boys basketball team.