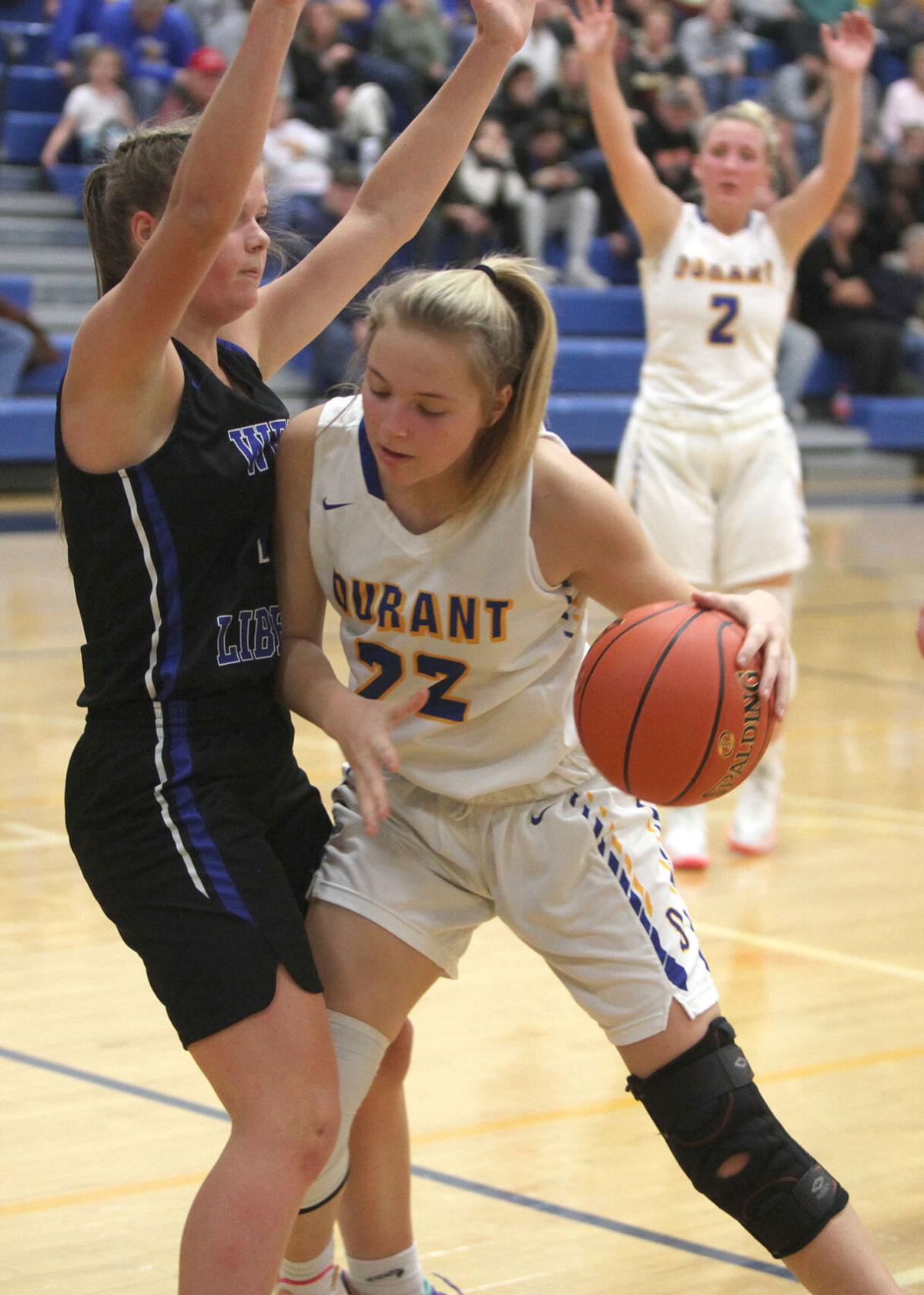 Peyton Buesing (right) of Durant works the ball toward the basket during the second period against West Liberty's Finley Hall at Durant High School earlier this season. 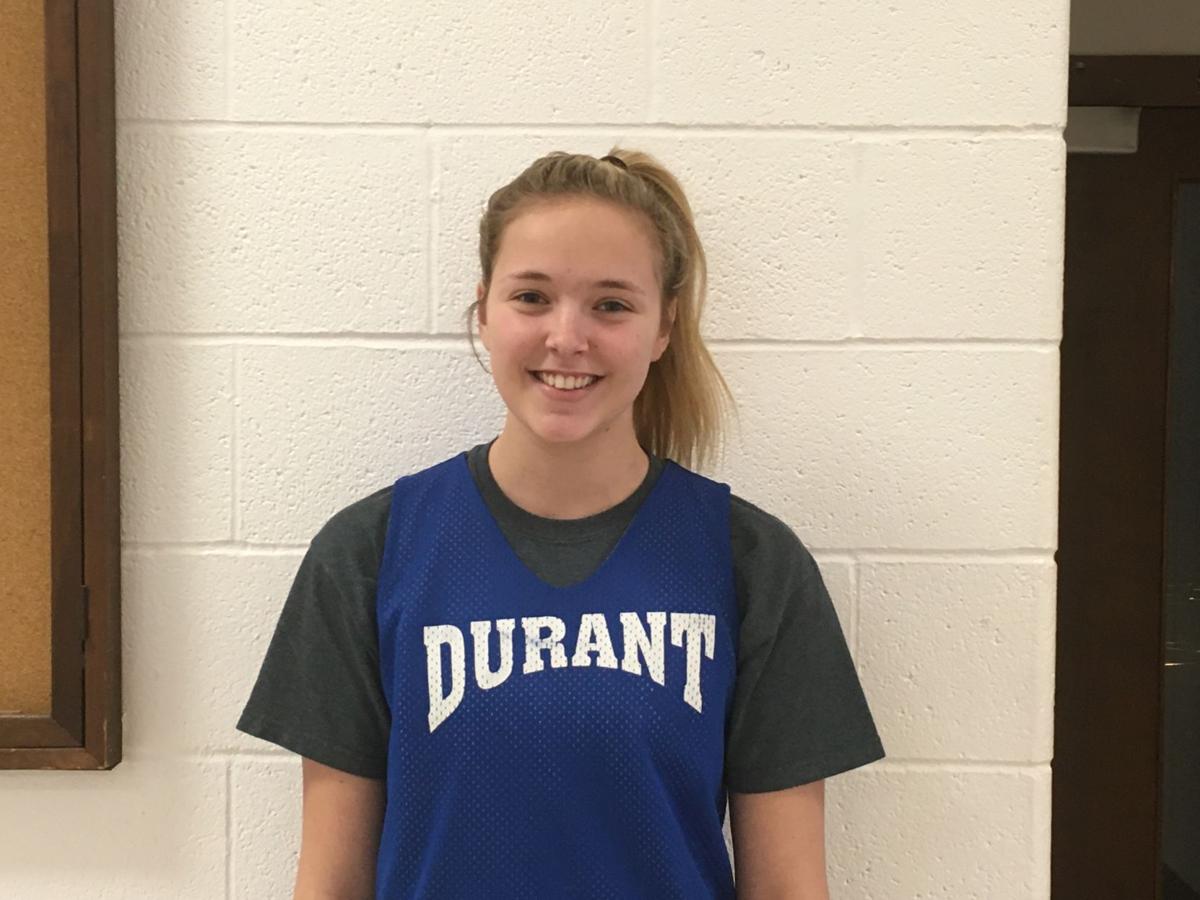 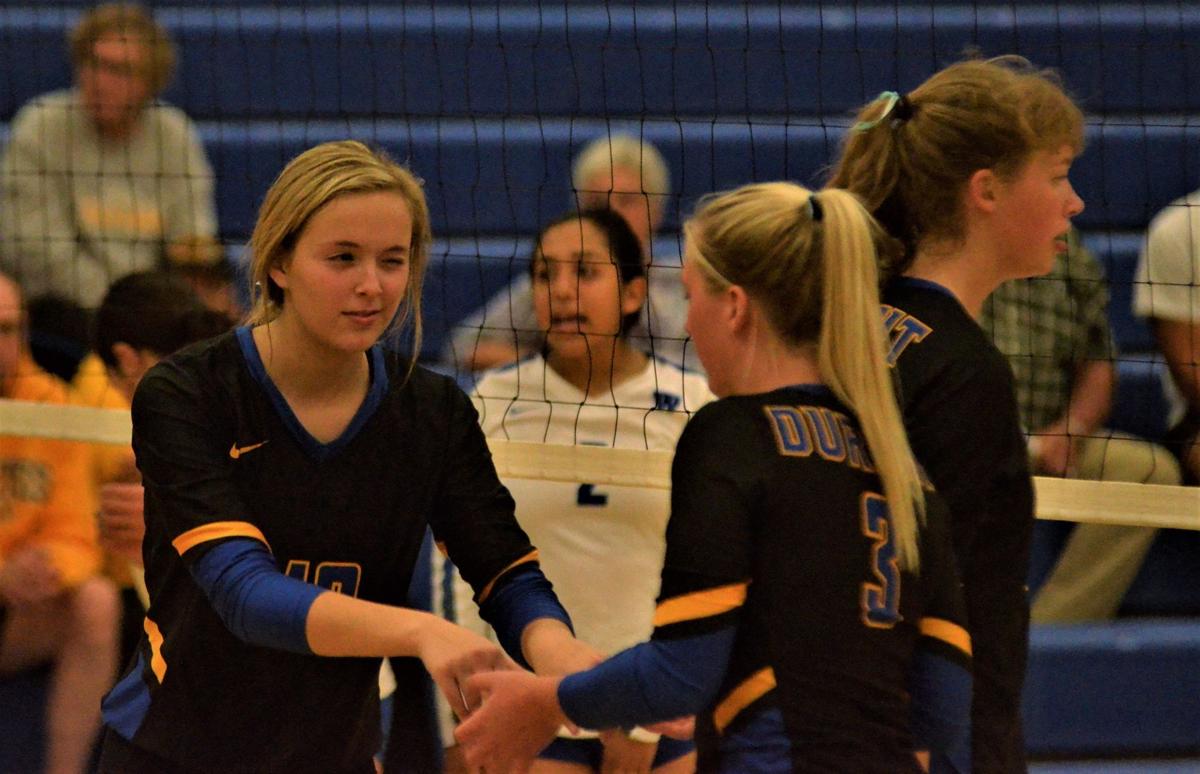 Durant's Peyton Buesing (left) gestures to teammate Kylie Schult (right) as the two sub in and out during the Wildcats Class 2A Region 8 first round match against Columbus on Oct. 18 at Durant High School. The Wildcats won three sets to two. 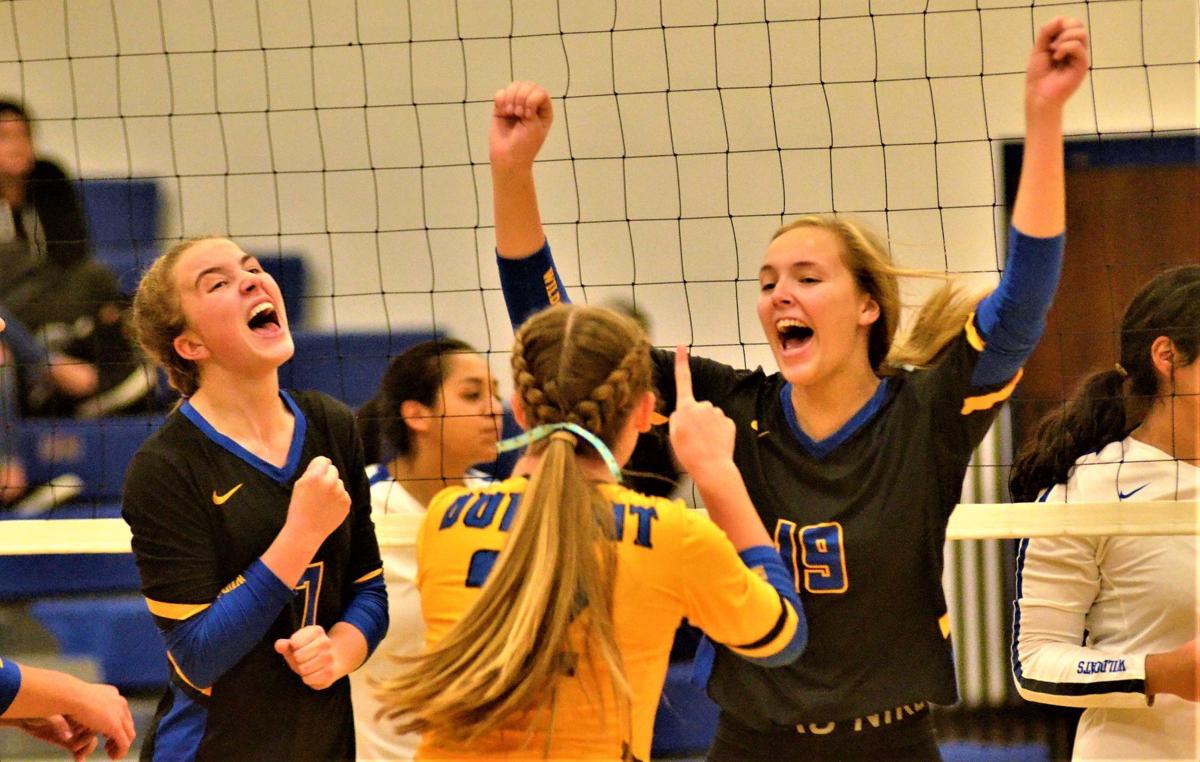 Durant's Isabelle DeLong (left), Ally Happ (middle) and Peyton Buesing (right) celebrate a point scored Monday night at Durant High School during the first round of the 2A Region 8 first round match against Columbus. Durant won in five sets.

DURANT — The scouting report on the Durant High School girls basketball team has been the same for some time.

For each of the past two seasons, Durant has been led in scoring by Ally Happ.

While defenses have only increased the attention given to Happ, who is also working her way back to full strength after missing most of her senior volleyball season to injury, Durant’s success has increasingly relied on the supporting cast, which proved a bit shaky at the start of the season.

"The scouting report on us for the past two years has been to stop Ally Happ," said Durant head coach Ross DeLong. "So to have a couple girls continue to get better and take some pressure off of her only makes it harder for teams to have success guarding us."

But a basketball season is often a test of perseverance. And the Wildcats have taken meaningful steps forward since starting 0-4.

This week’s Prep of the Week, Buesing capped off the back end of a Durant two-game win streak with a double-double in a 54-31 victory over North Cedar last Friday, going for 23 points and 10 rebounds.

"I think we've really improved on working together as a team," Buesing said. "We trust each other more on the court, I think that's definitely been a contributor to us playing better.

"(The North Cedar game) was definitely one of the best of my career, but I'm working to have more games like it."

In that game, which she says is one of the best of her career, she shot 11 of 16 from the field and grabbed seven offensive boards. It was the sixth game of the season she’s had three or more offensive rebounds.

"Those wins were huge for us," said the Wildcat head coach. "With our schedule coming up, we play familiar opponents coming up at home. We were playing on the road a lot to start the season, now we get some home games ... (Over the holiday break) we really just focused on the fundamentals. When we take care of the ball, we're usually pretty solid. When we turn it over, that's when things have fallen apart."

The Wildcats (4-8) have also seen nice production elsewhere, too, especially as of late.

Sophomore Isabelle DeLong is the Wildcat scoring leader at 10.6 points per game while Happ is second at 8.9 and Buesing comes in third at 6.2 a contest.

"The volleyball season was tough on me, not being able to play," Happ said. "But I really tried to use that to light the fire coming into basketball. I've been injured before, so I knew what the process was going to be like, and now I feel like I'm back to where I was before my injury."

Buesing has been efficient offensively, leading the team in field goal percentage with a mark of 39%, with the exception of junior Kaylie Weber, who stands at 1 for 1 on the season. Buesing, a 5-foot-11 forward, is under 15 points shy of matching her total career scoring output (84 points) entering the 2021-22 campaign.

But Buesing’s biggest impact has perhaps come from her rebounding.

"She's done a really nice job on the glass," coach DeLong said. "She's around the rim all the time and is getting a little more active all the time, that's something we've been looking forward to all year."

Upon graduating, the senior is planning on attending Des Moines Area Community College to major in agriculture. She doesn’t plan on pursuing an athletic career beyond Durant. If that is indeed true, she’s trending toward ending her career on the basketball court playing the best ball of her life.

"She's developed a nice mid-range game around the high post area," said the Durant head coach. "She's just done a nice job of getting a knack for where the ball is going to be."

Even from the beginning of this season, when Buesing came off the bench for the first two games, she’s taken huge steps in expanding her game. And with that has come a confidence that may have been lacking in the past.

"Confidence is a big part of it," said coach DeLong. "From game to game, you can see her start gaining confidence and hopefully it just continues to build."

Buesing also played volleyball for the Wildcats, and was second on the team this past season in several categories, including kills, with 110, assists (210) and successful serves (205).

"Playing together for so long, our minds have almost become one," Happ said. "You know how your teammates are feeling and they know how you're feeling."

"It helps that we've been playing together for so long," said Buesing. "And all the coaches we've had have been very supportive of the goals we have and have done a lot to help us reach those goals."

Opinion: Sean Payton's last season with the Saints was a success

Opinion: Sean Payton's last season with the Saints was a success

24 years later, Jamaica's four-man bobsleigh team is back at the Winter Olympics

24 years later, Jamaica's four-man bobsleigh team is back at the Winter Olympics

Though baskets weren’t easy to come by at times, the Muscatine High School girls basketball team remained resolute in finding a way and ended …

Wilton turns out the lights on Durant 69-37

West Liberty controlled the scoreboard and the game in a sound 59-20 victory over Camanche in an Iowa girls basketball matchup.

Saddled up and ready to go, Wellman Mid-Prairie spurred past Camanche 54-35 for an Iowa girls basketball victory on January 21.

Lisle Benet didn't tinker around with Rock Island. A 48-15 result offered a strong testament in the win column in an Illinois girls basketball…

It wasn't pretty, gut-tough wins usually aren't, but Sherrard wasn't going for style points. A victory will do, and it was earned 36-32 over T…

Peyton Buesing (right) of Durant works the ball toward the basket during the second period against West Liberty's Finley Hall at Durant High School earlier this season.

Durant's Peyton Buesing (left) gestures to teammate Kylie Schult (right) as the two sub in and out during the Wildcats Class 2A Region 8 first round match against Columbus on Oct. 18 at Durant High School. The Wildcats won three sets to two.

Durant's Isabelle DeLong (left), Ally Happ (middle) and Peyton Buesing (right) celebrate a point scored Monday night at Durant High School during the first round of the 2A Region 8 first round match against Columbus. Durant won in five sets.