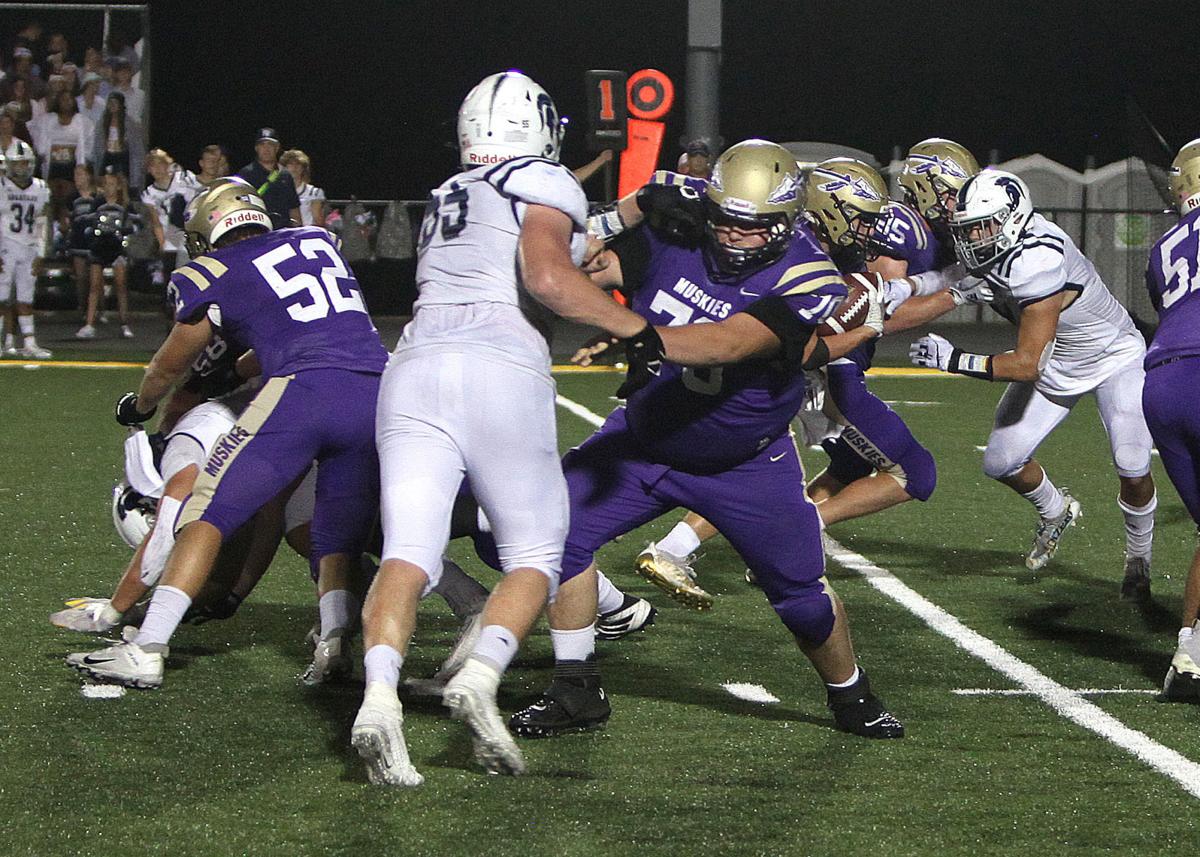 Muscatine's Patrick Loeffler holds his position as Pleasant Valley’s Andrew DePaepe tries to power past him during the second quarter of Friday's game in Muscatine. 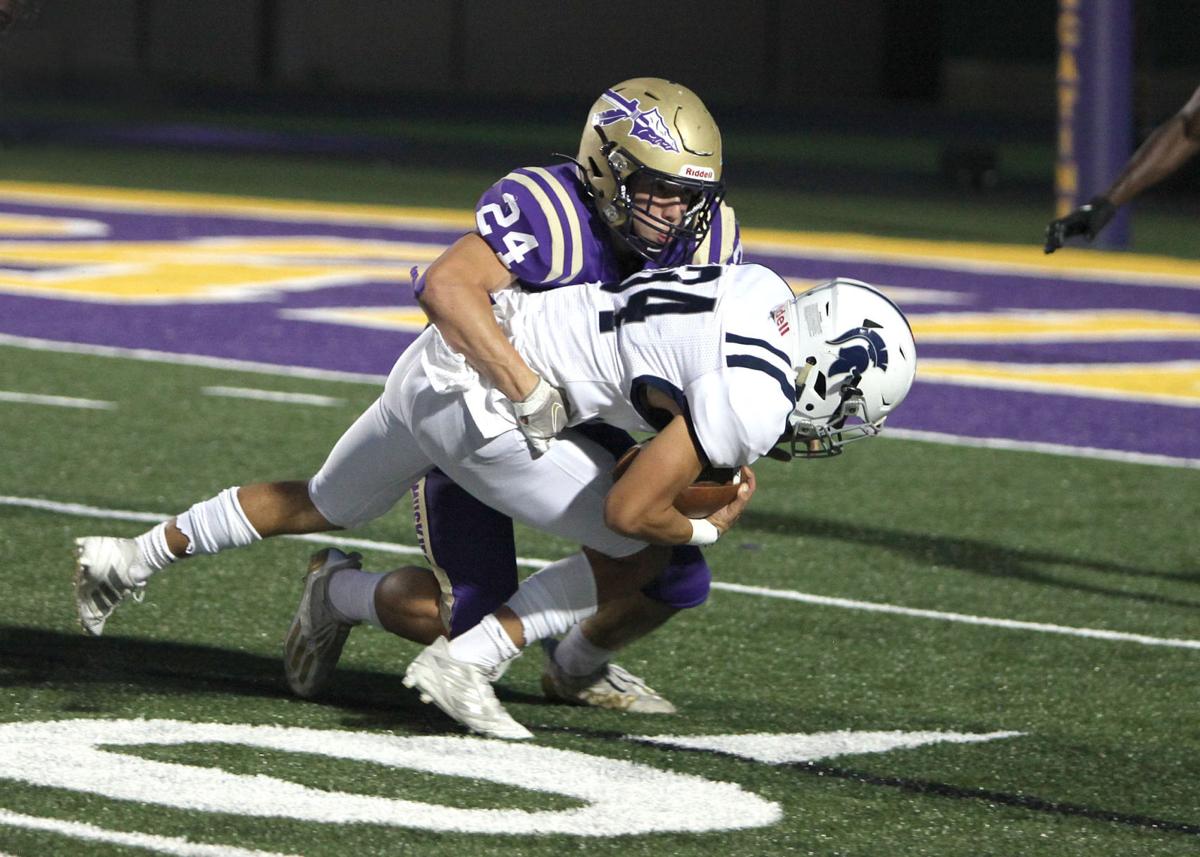 Muscatine's Ty Cozad makes an open-field tackle on Pleasant Valley's Tyge Lyon during the first quarter of their game in Muscatine on Friday. 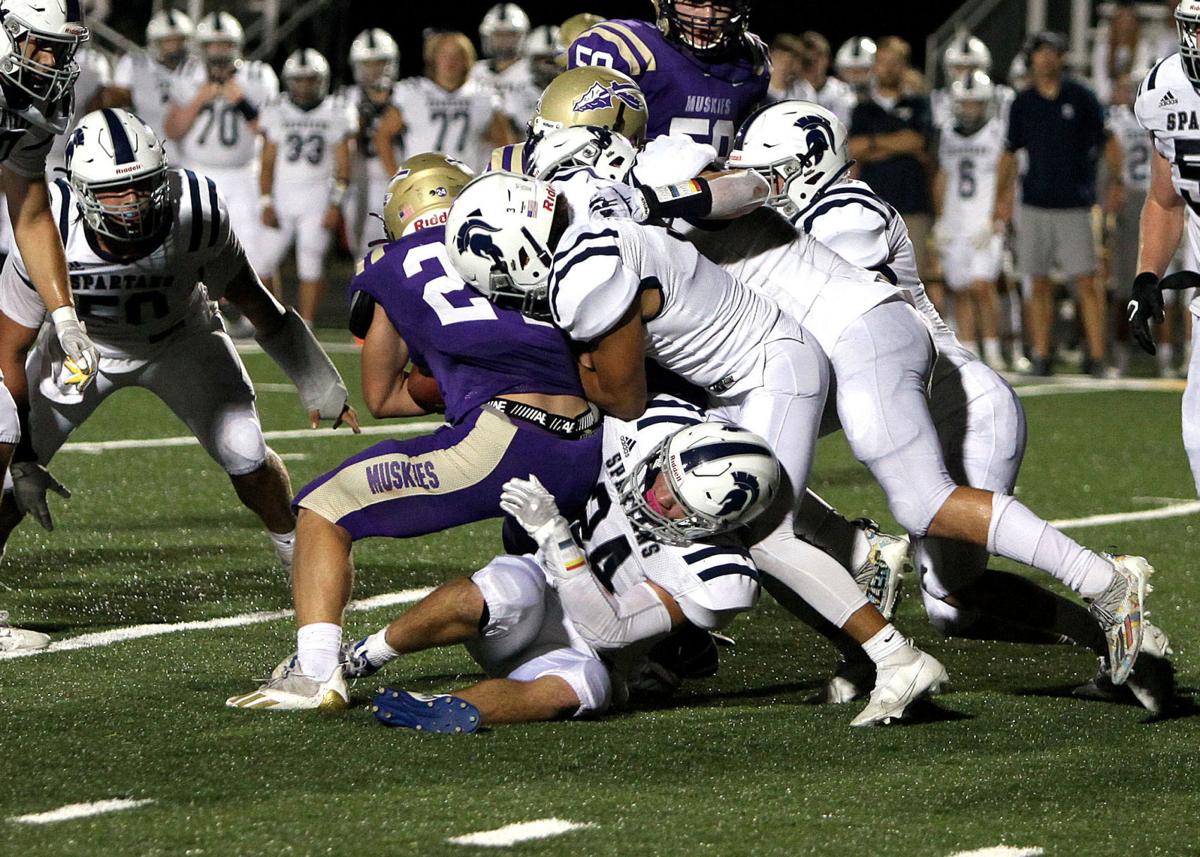 Pleasant Valley's Joe Gaya (3) and Tate Lyon (24) tag team the tackle on Muscatine's Ty Cozad during the first half of Friday's game in Muscatine.

Homecoming comes at a bit of a cost this season for the Muscatine football team.

The Muskies are still searching for their first win of the 2021 season and welcome Class 5A seventh-ranked Cedar Falls to town on Friday night, with kickoff for the 5A Group 3 contest scheduled for around 7:15 p.m.

After dealing with some injuries and issues with overall numbers, Muscatine feels good about some players returning.

Sophomore running back Ty Cozad exited last week's 42-10 loss to Pleasant Valley in the second half but should have no issues going forward.

Cozad has been the go-to ball-carrier for the Muskies to this points in the season. He leads the team in carries (65), rushing yards (154) and total yards from scrimmage (188).

"Luckily, everyone who left the (Pleasant Valley) game is good to go," said Muscatine head coach DJ Hawkins. "This week, there was a much bigger emphasis on controlling reps and rotating different guys at different positions so we don't get put in a situation where we, if we lose a couple guys, there's subs that can step in. ... We've got to make sure we've got depth throughout.

"Whether that's meant pulling up more freshmen or sophomores, whatever it is, we have to have kids that can go in the game, know what's going on and can compete."

Much like the team in general, the offensive line play has improved as the 2021 campaign has gone on, which has allowed Cozad a little more space to operate. The sophomore remains steadfast in his confidence that better and bigger gains are on the horizon.

"We've been improving every week," Cozad said. "We're just focusing on that going forward. ... I'm just trusting in the blocks and trying to find a hole where there is one, wherever it is, hopefully I'll find it.

"We trust each other."

An improved passing game may also open things up for the Muscatine offense.

That aspect of the Muskie attack took a leap in the second half against PV.

Though some yards have been accumulated late in lopsided games, there are no meaningless snaps this season for Muscatine (0-4).

Quarterback Landon Battey completed 13 of 20 passes for 95 yards a week ago, including a 13-yard touchdown pass to Brayden Lane. The junior quarterback found five different Muskie receivers against the Spartans, as Lane and juniors Luke Hardy and Matt Keener have shown promise as weapons to supplement Cozad and tight end Nolan Recker.

Recker has seen his playing time dramatically increase this season, primarily due to the fact that he's playing both ways as a senior this season, but he's contributed 70 yards on the ground. He's also proven to be the most prolific of the Muskie pass catchers, as he has 20 receptions for 118 yards, both team bests.

While having its own passing game keeps progressing, Muscatine's biggest task on Friday night may be in limiting the Cedar Falls passing attack.

Cedar Falls will count on senior quarterback Hunter Jacobson to provide opportunities for its talented group of pass-catchers. Jacobson is 41 of 75 on pass attempts this season for 571 yards and five touchdowns against three interceptions.

His top receivers have been Trey Campbell and Caeden Janssen, both seniors. Those two have combined for 29 receptions for over 450 yards and four scores.

That group certainly comes with pedigree, as Jacobson is the son of University of Northern Iowa basketball coach Ben Jacobson, Campbell has committed to UNI for basketball and Janssen has signed on to play football at Upper Iowa University next season.

Jacobson is also the Tigers' top rusher at 241 yards on 45 totes and three touchdowns. But Cedar Falls also has two other backs who have over 100 rushing yards this season in junior Jacob Kieler and senior Carter Ernst.

In order to stymie the Tigers, the Muskies will need plays from the defense. Muscatine received one such play last week when a mishandled pitch on a PV option ended up in the arms of Muskie Aiden Lopez.

"I've just been doing my job," said Lopez. "I remember (PV) pitched the ball and it being bobbled and I saw it fly up. ... (Once I had the ball) I saw a guy coming and thought 'Just run.'"

At 5-foot-5, 140 pounds, the undersized Lopez may invite opposing offenses to run plays at him, but the sophomore responded with 9 ½ tackles against PV plus the turnover.

"Aiden's been working hard," said Cozad. "Over the summer, I don't think he missed a lot. ... He's something special, he'll make a play where there is one.

"Our defense can shut teams down in certain areas, but we need to capitalize on that and put more points on the board."

On the other side of the schedule, the Muskies will be away from home the next two weeks, as MHS has back-to-back games in Dubuque against Hempstead (1-3) and Senior (3-1).

This week also will bring Jake Mueller back to Muscatine. Mueller, who was a part of the MHS program for 15 years and head coach for 10, is an assistant with the Tigers.

Before taking over as head coach, Hawkins was an assistant under Mueller.

"When the schedule came out, I sent him a text and said 'We're having you for homecoming,'" Hawkins said.

However, Muscatine has other matters at hand.

"They're good," Hawkins said. "We've played good, tough teams, but (Cedar Falls), as far as all-around talent, they've got speed on both sides of the ball. ... It's going to be a tough challenge and hopefully we'll rise to that challenge."

WHEN: At the conclusion of the freshmen/sophomore game, kickoff approximately 7:15 p.m., Friday, Sept. 24

Muscatine's Patrick Loeffler holds his position as Pleasant Valley’s Andrew DePaepe tries to power past him during the second quarter of Friday's game in Muscatine.

Muscatine's Ty Cozad makes an open-field tackle on Pleasant Valley's Tyge Lyon during the first quarter of their game in Muscatine on Friday.

Pleasant Valley's Joe Gaya (3) and Tate Lyon (24) tag team the tackle on Muscatine's Ty Cozad during the first half of Friday's game in Muscatine.